The Hartley Christmas just keeps getting bigger and better each and every year. This year we added two new official family members and two furry family members & you better believe we packed us all under one roof--good thing Grandma and Papa have extra space these days.

We decided to head down on Friday night so we would have a little time with my mom and dad before the rest of the family showed up---the boys don't get my mom and dad to themselves very often and they boys LOVE being spoiled by them. 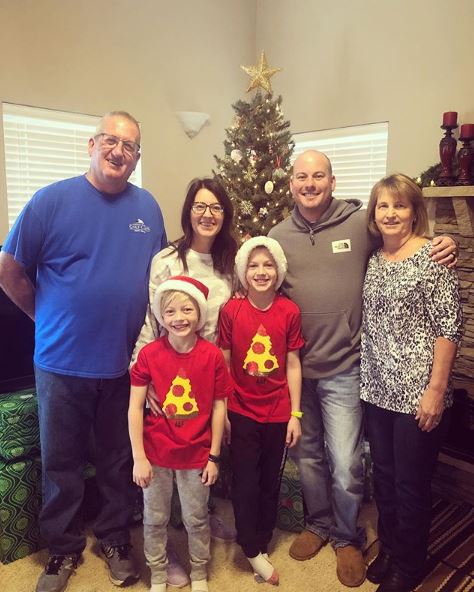 & our elves grew in numbers too, Trenton got in on the action this year, although he wouldn't wear his hat. One of the things I love most about going home for Christmas is that there it's a come as you are. Sweatpants and last year's Christmas shirts are totally a-okay! 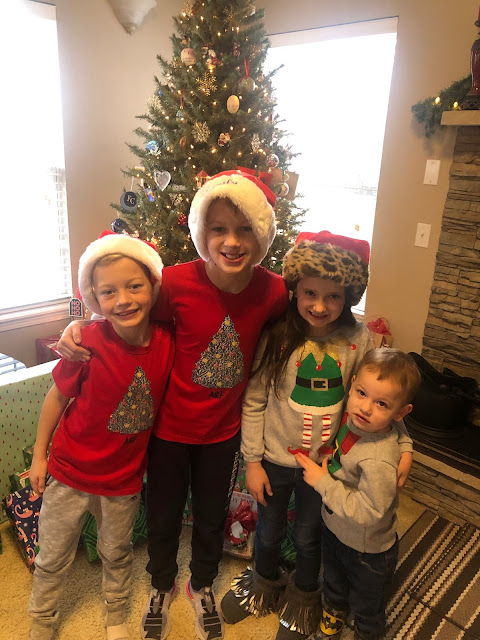 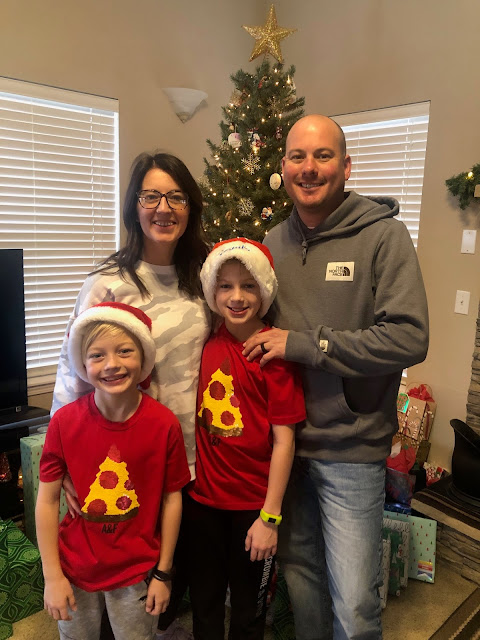 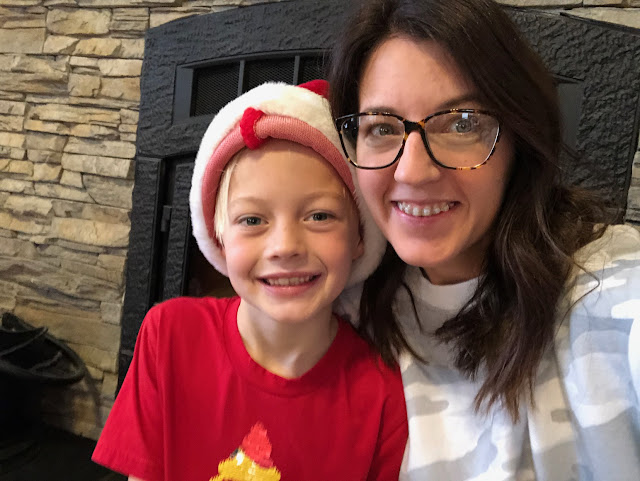 Whoa, Nellie. She was furry. She was big. & She was in charge. 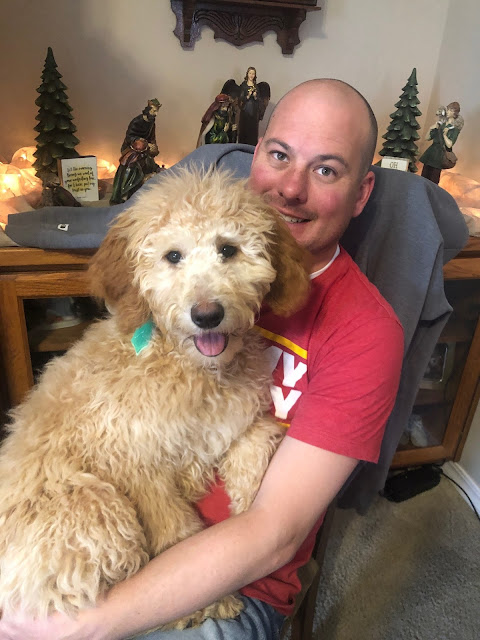 & we got to meet the newest four legged family member--Millie, my nephew, Blake's little Aussie-doodle. 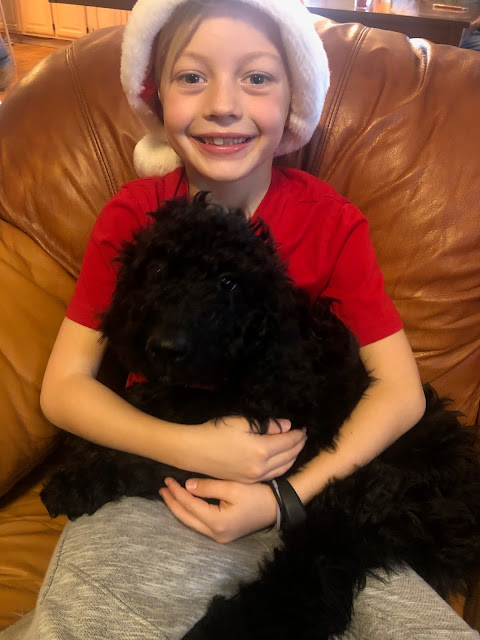 Finally, everyone had arrived and it was time to open presents. Kaden had one thing on his wish list, a blue tooth speaker. CHECK. & Logan wanted a Hydroflask. Also, CHECK. 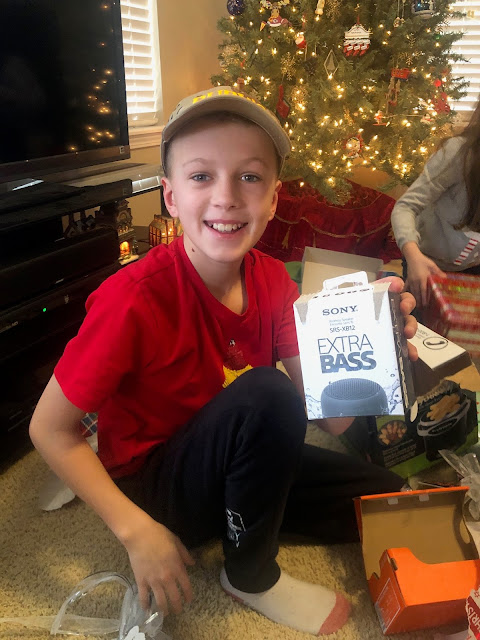 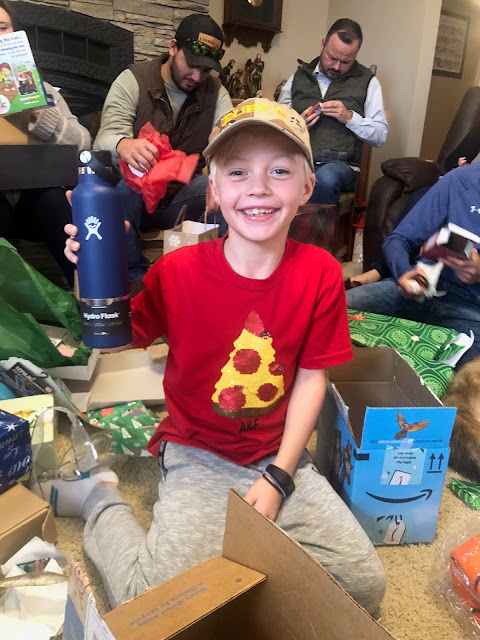 After those two picture, I put my phone away and tried to get lost in the moment. The boys are getting to an age where their requests are becoming more specific but thankfully, they are still so very appreciative of anything they get.

Once we were done unwrapping gifts we had a few hours to kill until the entire Hartley clan would be arriving so the kids got to coloring and building. Prior to heading down to my parents', Kaden and I ran to Michael and picked up a couple cardboard houses, they spent HOURS coloring this and even more surprising, everyone got along!! Best $8.00 ever spent! 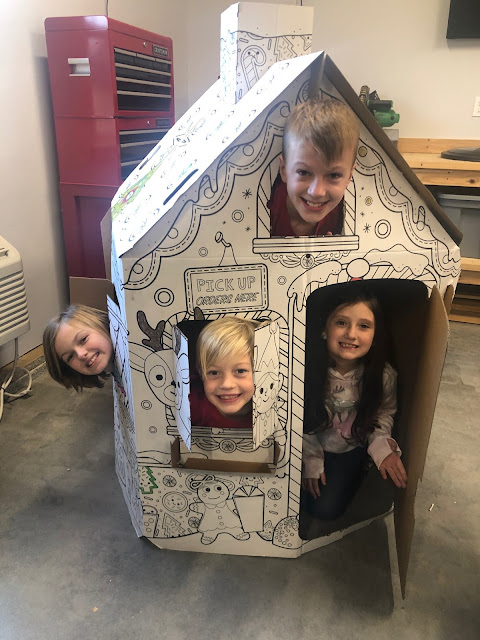 & poor Nellie didn't know what to think of little Millie and could often be found perched on someone's shoulder, whomever was in this chair. She definitely doesn't realize how big she is getting. 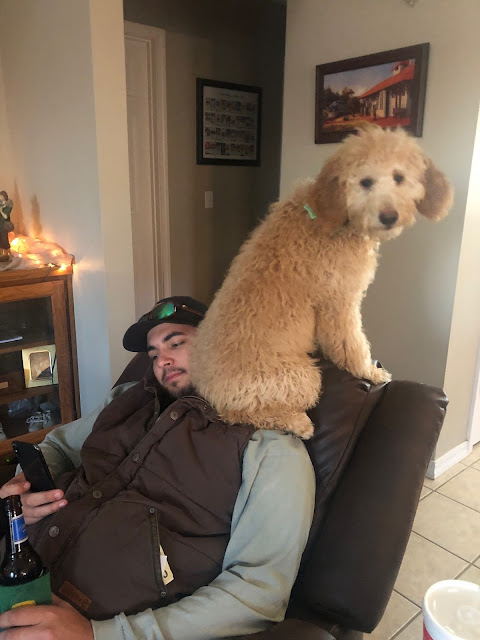 The Hartley clan arrived, we all ate and then the BIG guy himself showed up. The boys once again proclaimed they both wanted new mountain bikes. Phew. 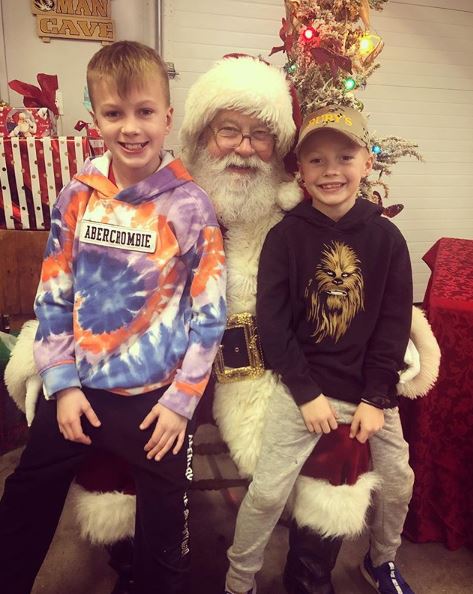 & well, as for me, I was holding my newest buddy & actually was kind of the first person outside of my sister that got to keep him while his momma and daddy ran some errands. He slept pretty much the entire time but there wasn't anywhere else I would have wanted to be. 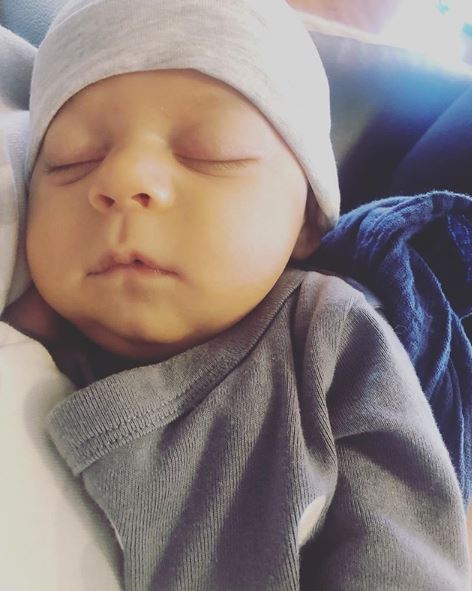 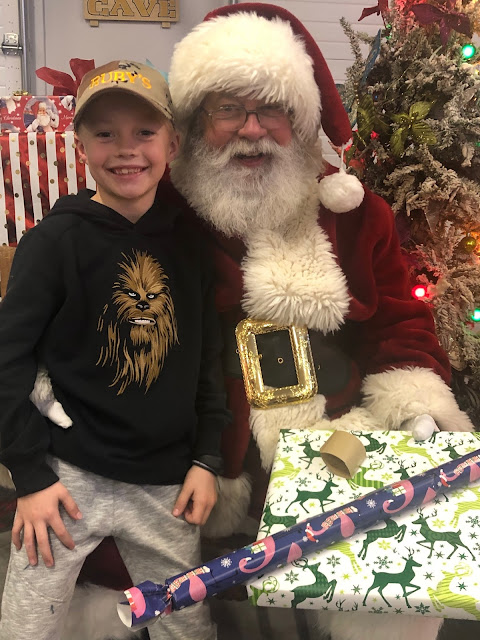 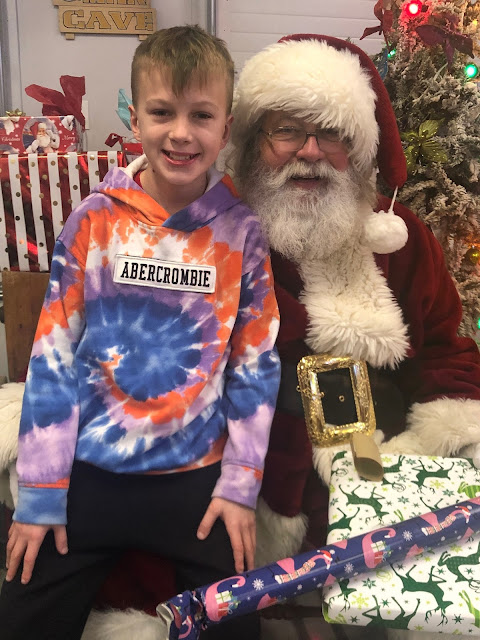 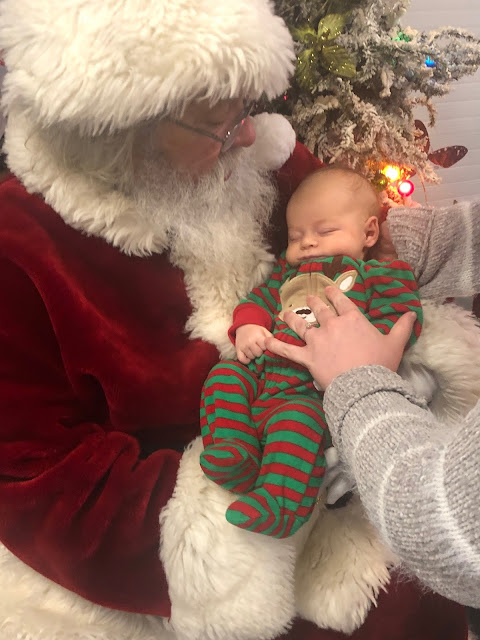 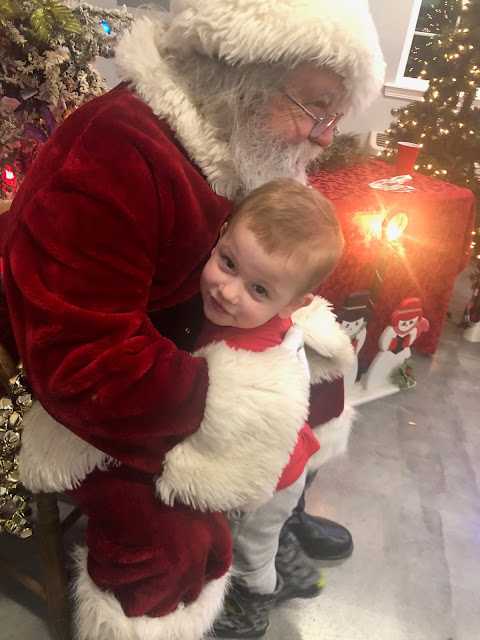 & just like Thanksgiving, Christmas just wasn't the same, it probably never will be. We were all missing Uncle Scott so much but no more than Aunt Kelly, the girls and these three. It's hard to look at my dad and not be sad, he lost his brother and his best friend & I can still tell how much he is struggling with it. Which is why these family gatherings are so important--to take advantage of the time we do have because you just never know. 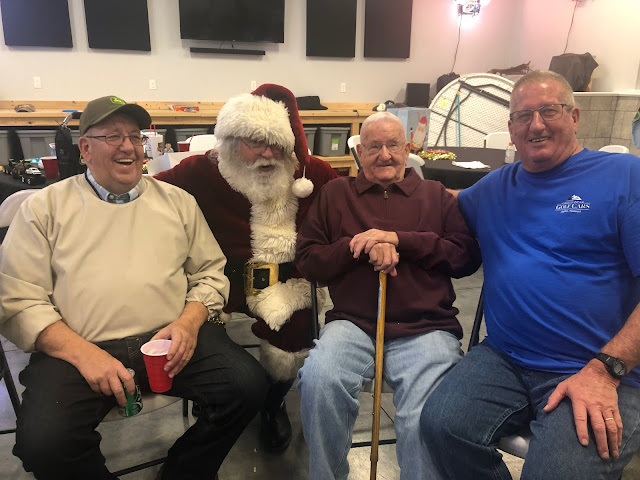 This one, he's my favorite & his selfie game has improved greatly. 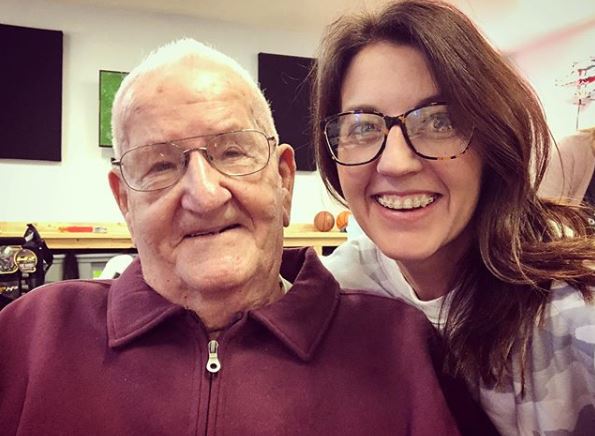 & after everyone was gone we loaded up all the kids in their matching pjs and we went to see the Carthage lights. The line was long but it was worth the wait. As we got back home, our camp out was ready for us. The kids, minus Logan and Trenton, and I were all sleeping out in the shed--it's the only place we had enough room to make it all work & we were determined to make it work. 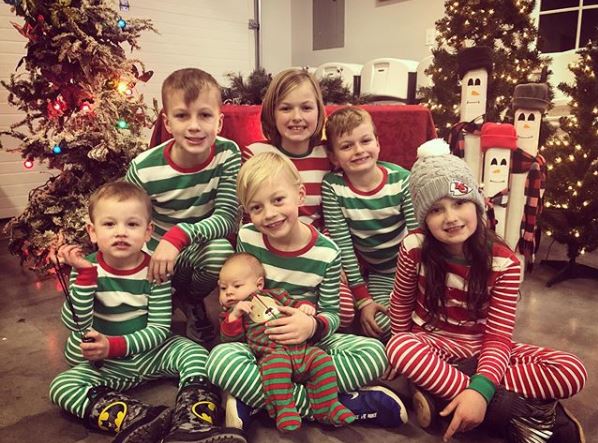 The following day was game day for the Chiefs and sadly we had to head home to KC. We made the most of our morning with Grandma Sara and Papa Tom but saying goodbye just doesn't get any easier, especially after a weekend that was full of all the people we love so much. 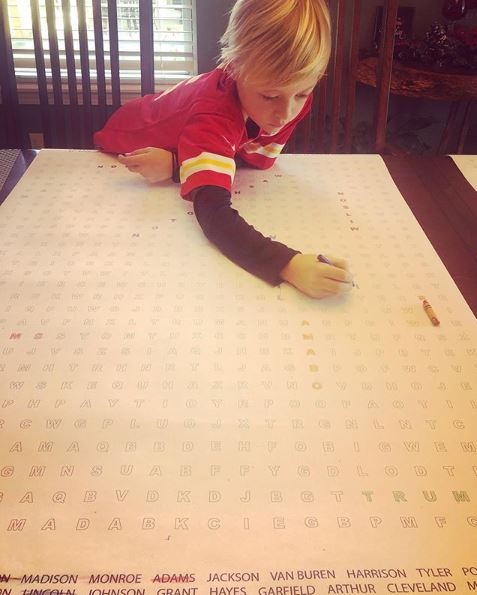