It's amazing what can happen in 36 short hours.

But let's back up---since getting Gus we have always talked about our next dog being a golden retriever or at least part Golden. Brodi will go down in history as one of the best dogs and his demeanor was so calm and loving. We had a hard time thinking about getting a Golden so shortly after Brodi and thus we went with another Pitbull, Gus to allow our hearts a little more time to be ready for more Golden love. So when Stoli started having a tough time we knew what was around the corner and of course, that brought up the question, do we get another dog. And if yes, when?

We immediately knew we were a two do family, just as when we said our goodbyes to Brodi, so it wasn't matter of if we would get one but when.

We were open to lots of possibilities---well, all possibilities that involved a Golden. That's not to say that we weren't open to others but we kind of had our hearts set. Or at least, I did. So I put it out to the world and posted on Facebook that if anyone knew of someone needing to rehome a Golden or a Golden of sorts, to let us know. I started looking into Golden rescue sites all over in the Midwest from Texas to Minnesota to Chicago and Denver. & I found a few but in the end, we knew we needed a puppy. We needed a puppy so that Gus didn't feel threatened so they would have the best chance possible to get along. We were confident that when the timing was right, it would just fall in our lap.

This puppy fell in our lap & just like with Gus, I think Stoli had everything to do with it.

AT 4:30 pm on October 10th my BIL sent me a screenshot of a puppy. One insanely cute puppy. This puppy (and the mention of 5 others) was just posted to a Swap and Shop site that my BIL happens to be on & due to an upcoming vacation they were looking to find them homes rather quickly. Thing is, puppies (or pets of any kind) aren't allowed on this site and it got taken down relatively quickly but my BIL was able to make contact with her. He asked if there was a girl since we wanted a girl and then I started texting Justin. We got a couple pictures. I texted the lady and asked her to hold her until that evening as I was headed home to discuss with my husband. She agreed & when I called her at 6:00 we said yes. Justin's exact words, "Fuck it, let's do it. We got this."

They stated they would bring her to us or we could meet them halfway between where we lived and they lived on Saturday which would have only been about a 45 minute drive BUT I had a better idea. Since we were trying to keep it a secret from the boys -- thank goodness it was only 36 hours, I am terrible at secrets -- I thought maybe my mom and dad would meet them a day earlier and they could bring her up and surprise the boys since they were already coming to their football games.

Mom and Dad were all about it. So was the puppy--- 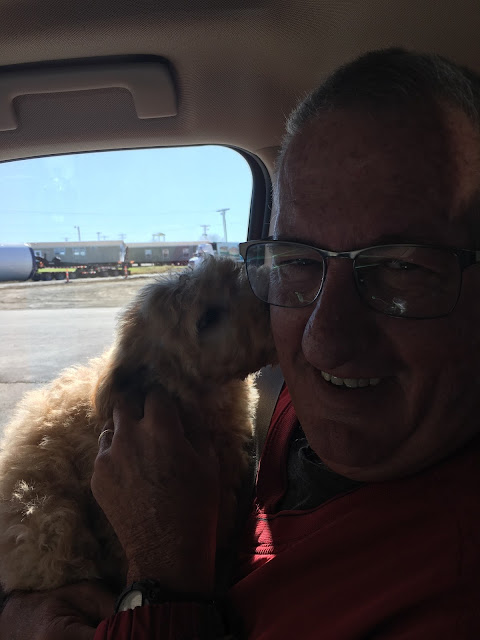 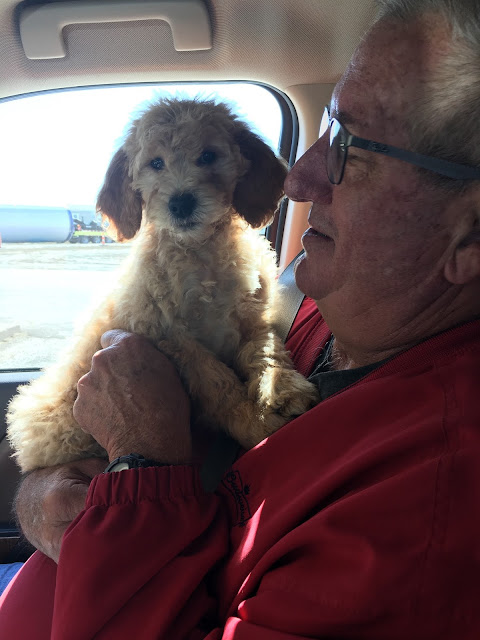 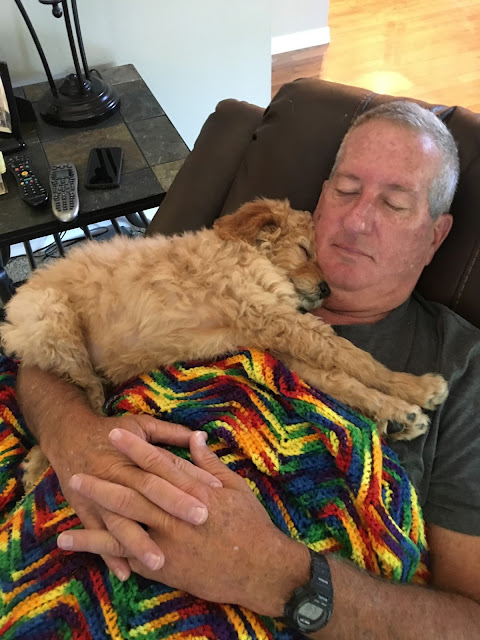 And of course I had it all planned out. We would get to Logan's game, they would be there and say something about forgetting something in the car and then pull her out---but that didn't go as planned. They weren't able to get there as early as were needed to be so plan b was to surprise the boys at the field---no dogs allowed but we were going to press our luck just this once. & you know all those amazing YouTube videos where the kids freak out crying about the new puppy---yup, that didn't happen. I think they were stunned silent.

But they were beyond excited and happy. & we named her Nellie.
In part because of my love for Nelly the rapper & in part because of the little girl from Little House on the Prairie who was blond and had curls.

Other names in consideration - Stella, Harley, Charlie, Penny. In the end Justin let me choose. 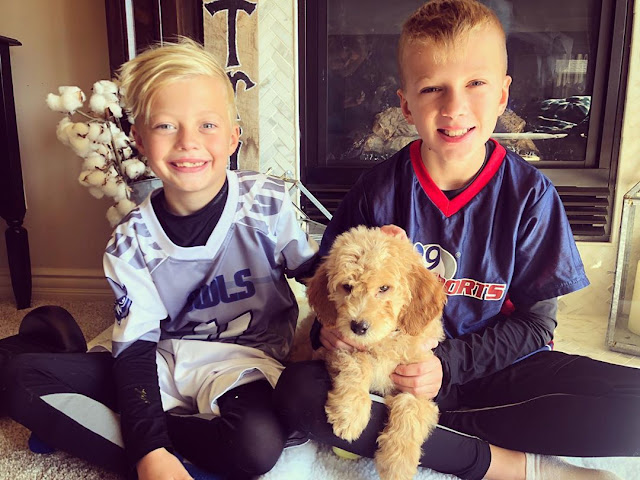 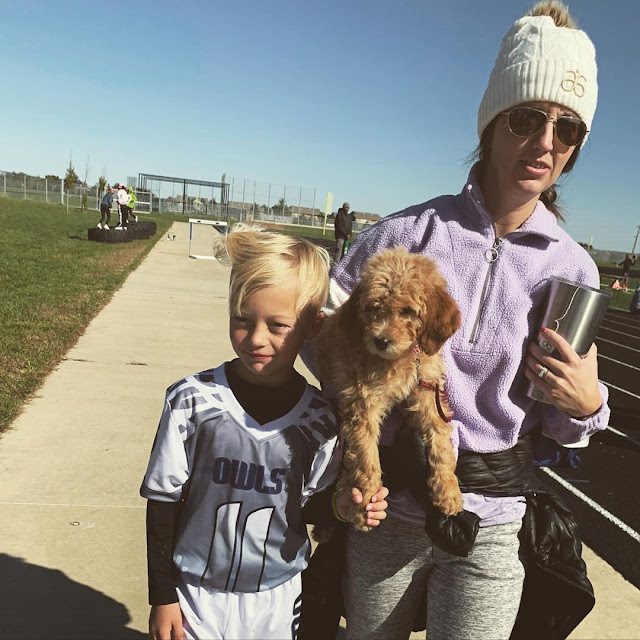 After Logan's game we headed home to have lunch with Grandma Sara, Papa Tom, Grammy and Craigster before heading to Kaden's football game which gave us time to introduce Nellie to Gus. We weren't sure how it would go but looking back, it probably went better than we could have asked for. Sure they were curious. Sure Gus was excited. But he was gentle and all the conversations that we had with him prior (out of the boys' earshot) had paid off. 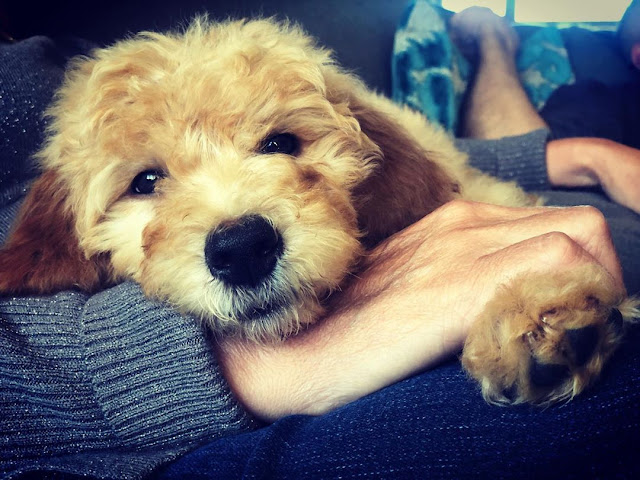 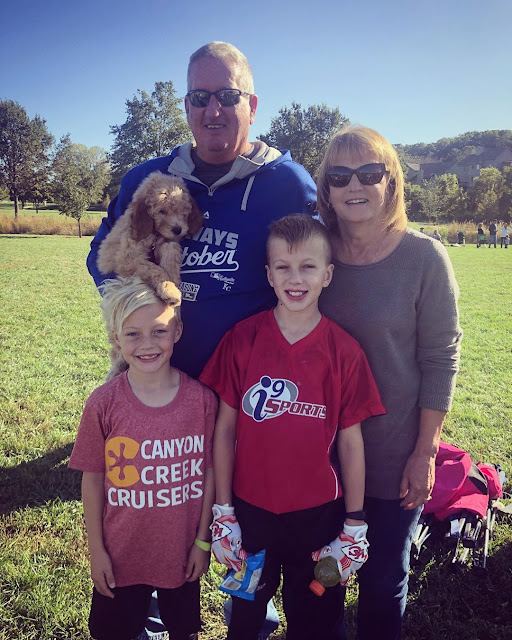 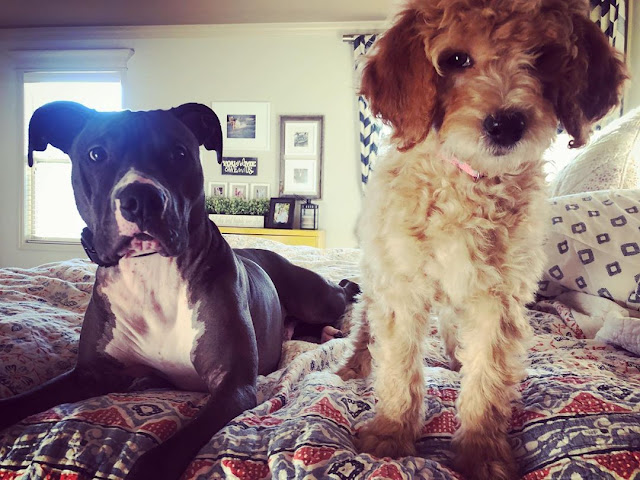 It didn't take long at all before Nellie made herself at home. She reminds me so much of Brodi, loves the cold tile/hardwood floors and wants to be everywhere you are. 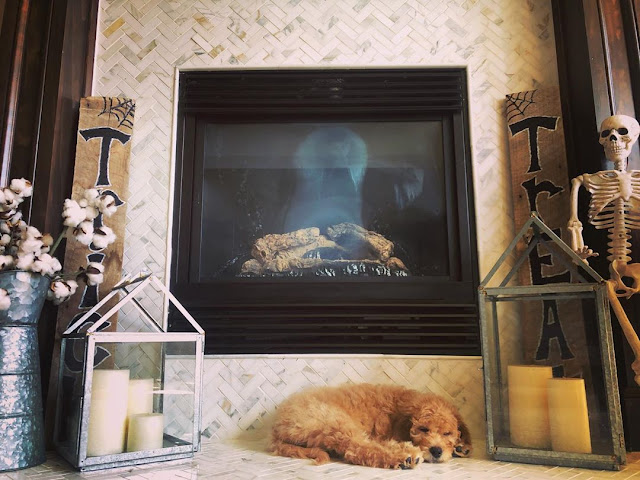 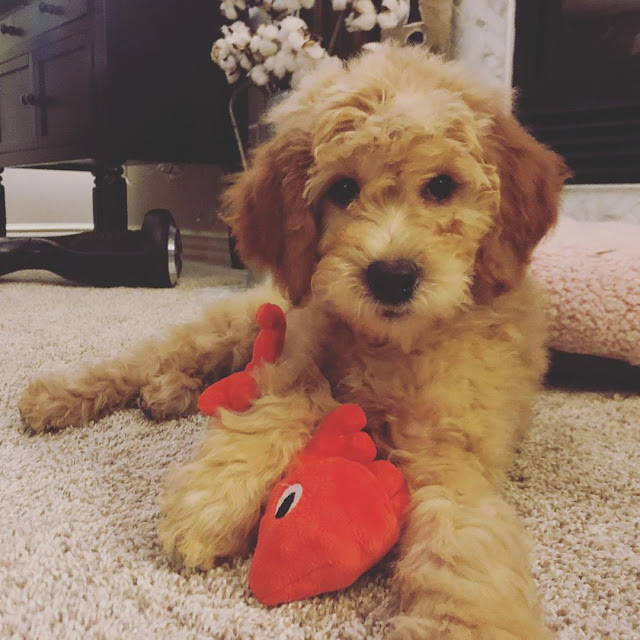 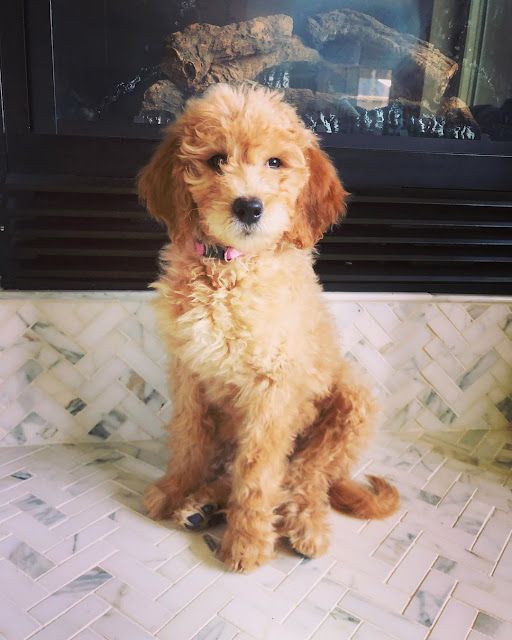 As for her and Gus. Well, they are best of friends. The first couple of nights it took a little getting use to for them to fall asleep but they figured it out. For as big as Gus is compared to Nellie, they play so well together. Nellie isn't intimidated and often goes after Gus full force but Gus remains gentle. Gus stepped right into that big brother role as he taught her how to go up and down the stairs and when we call for them, he comes running for a treat which also brings her running.

And as soon as we get home & let Nellie out she whimpers until Gus is with her. It's sweet to see just how much of a bond these two have created in the last week and I can only hope that it matches that of Stoli and Brodi's. We could only be so lucky. 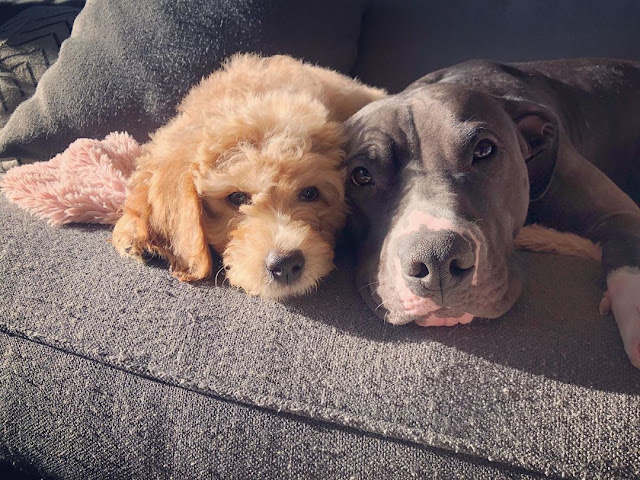