It's not often that we get to go to the lake two weekends in a row. And for the last 6 years we have never been able to go down the first weekend of August because I have always been attending a conference in Vegas...but not this year. This year was the first year in where I didn't have to go & as soon as Justin learned this, he and the Pitt Smokers signed up for the Laurie Hillbilly BBQ competition in Laurie, the little town next to our lake house.

The plan was that we would all caravan down -- the Seilers, the Griffiths and the Souths, we would pull the trailer. & we did, only had one little mishap when the head vent came flying off the trailer on 435 but no one was hurt, all was good and we kept on going---we didn't even know it happened. We arrived into Laurie about 3ish & we went straight to the BBQ site to drop off the trailer. The guys had decided that since they were using can smokers they would just sleep at the cabin and get up super early to head in & that's exactly what they did. Before leaving we decided to let the boys play in the Buck a Duck race--basically, a dollar buys a rubber ducky and they dump all the duckies into a stream and the first one that crosses the finish line wins 50% of the pot. It was a fun little fund raiser so we thought why not, bought our ducks but we didn't stick around for the show. Instead we went back to the lake house to enjoy the water and fishing. 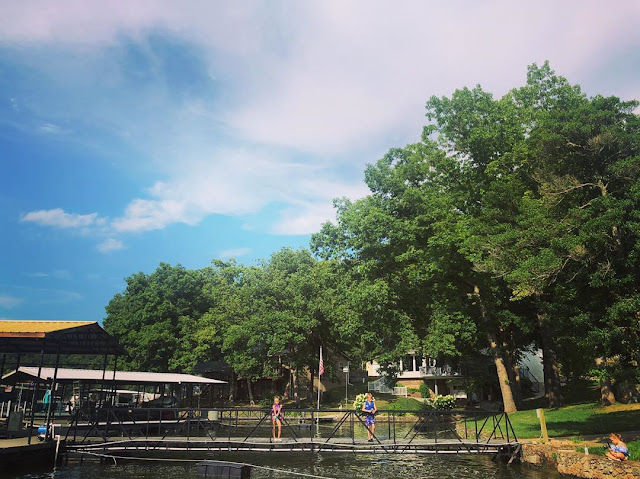 We should have though. about 4:45 Jay got a phone call asking for Logan South. We all thought it was weird as why would someone be calling Jay asking for our son BUT then we realized what was going on. Logan's duck had one the race and he was $62 richer! He was a gracious winner though and gave each one of the kids $5 and then we bartered for what he really got to keep, he was pulling for $24 -- that I could get behind but he had to wait until we got home. I placed it in my wallet and for the next 72 hours he would not let me forget that I said $24--I get it kid! 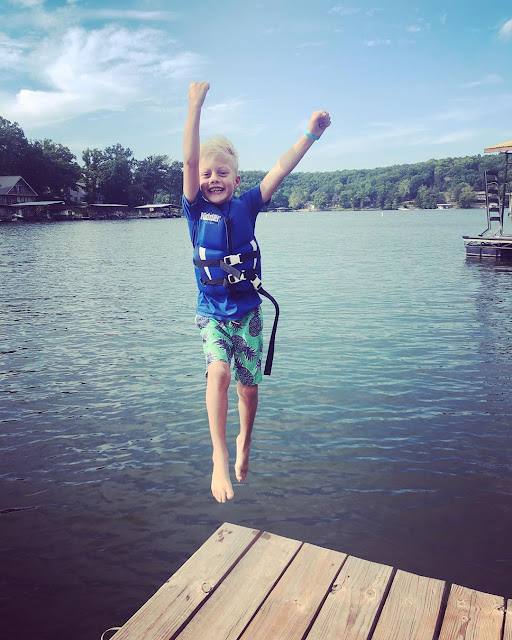 We headed back into town to collect his winnings, attend the chef's meeting and then grab some dinner at one of our favorite local establishments, then it was back to the lake house for some sleep before the big boys had to get up and head out for the competition.

As soon as we were all up and around the kids were ready to head to the water and wanted to go fishing again. I probably fixed our fishing poles more times than I can count on two hands and we only caught one fish, I caught it, but it was worth seeing them all have fun. 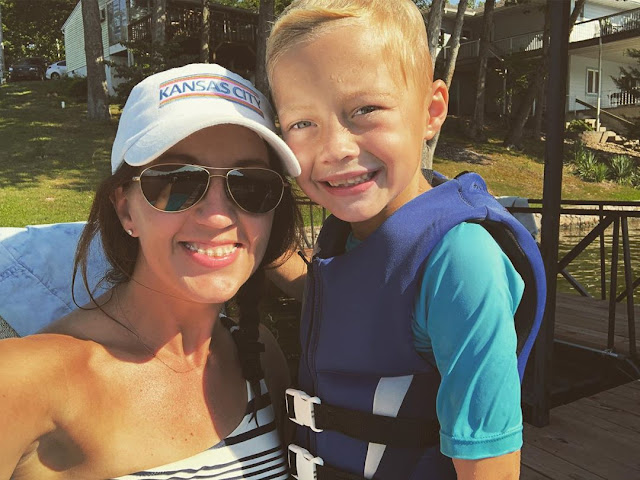 Mid morning, Kaden, wasn't all too interested in being in the water, he just wanted to be with his dad. So I texted Justin and he said that while he couldn't leave to come and get him, I could bring him up. This brought a smile to Kaden's face. I ran him in there and he spent the rest of the morning helping get everything ready for turn ins. He even got to smoke his own ribs from start to finish. I mean look at how yummy these look. 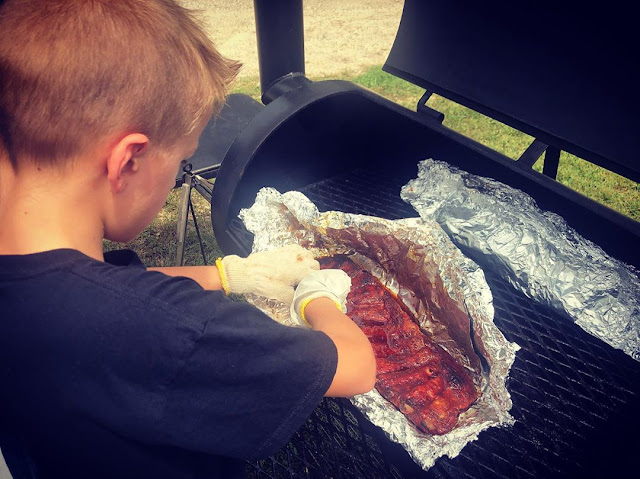 After lunch the rest of us, the girls plus Logan, headed into the BBQ to finish out the turn ins and then to wait for the awards. It's been a good while since the boys and I have been able to be there with Justin for the results due to baseball so this was a special treat for us all. 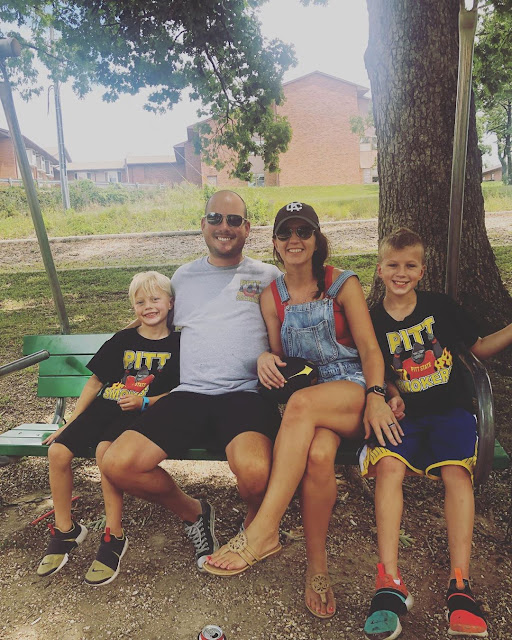 And it was soooooo worth it too. The Pitt Smokers took 1st PLACE in chicken -- Woo-Hoo! Although they were called up as the 2nd place winners but once Justin got up there he realized what he had done and said, "Wait, that isn't right, Pitt Smokers, hold on..." he then announced the 2nd place winner and then re-announced their first place finish! We were all super excited, especially the kids & gosh darn it, I missed getting it on video, forgot to hit the button. They didn't end up placing in the top 10 for anything else BUT they were 12th in brisket and finished 8th overall! It was a great finish for them, beating out some HUGE names in the BBQ circuit too. So proud of them all.

And just as exciting, they have a KidsQ and both the boys want to participate next year so I guess we will see you same time next year, Laurie Hillbilly BBQ. 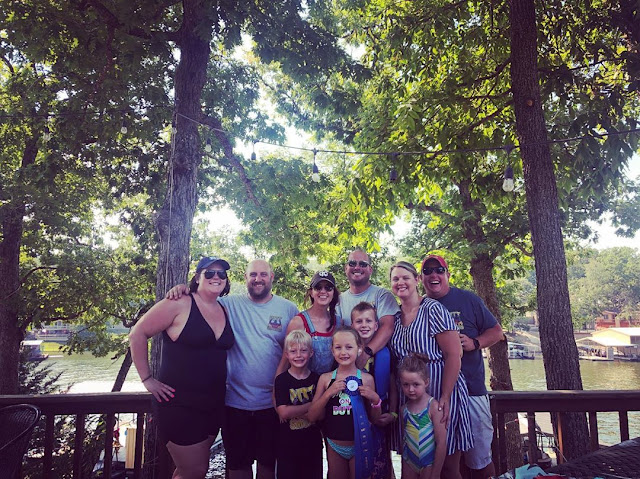 We were all pretty wiped from the early start and the long day at the competition that we decided to stick close to home on Saturday evening. The kids swam, we ate some first place chicken and the rest of their BBQ leftovers, plus Kaden's ribs & just chilled. It was an even earlier night than the evening before which also meant it was an earlier morning for most of the house. And at 8:30 we were meeting more friends in town at Val's for breakfast. The Walshes were down at Scott's lakehouse and the Berbs were with them. Thankfully, Val's, was able to fit us all in & let me just tell you, their cinnamon cake, may have been bigger than Kaden's arm but that didn't stop him from putting a giant dent in the thing! 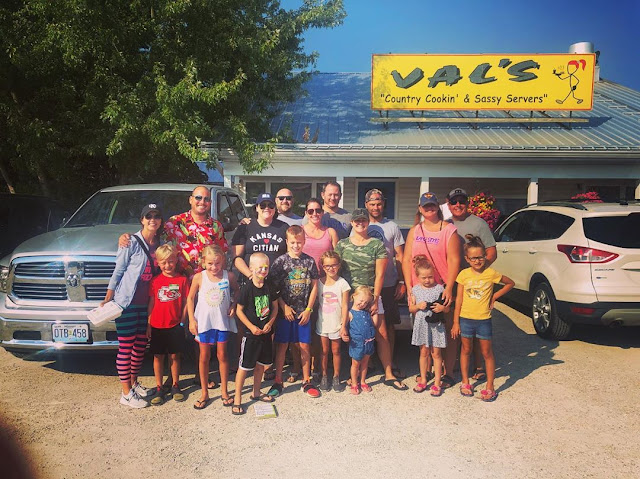 We immediately went home and headed out on the water. We met some other friends in a cove, headed off to Franky and Louie's before heading back to the house and just relaxing on the dock. The Griffiths took off late that afternoon and then we decided to hit up Jolly Rogers for dinner and take in a little night fishing. 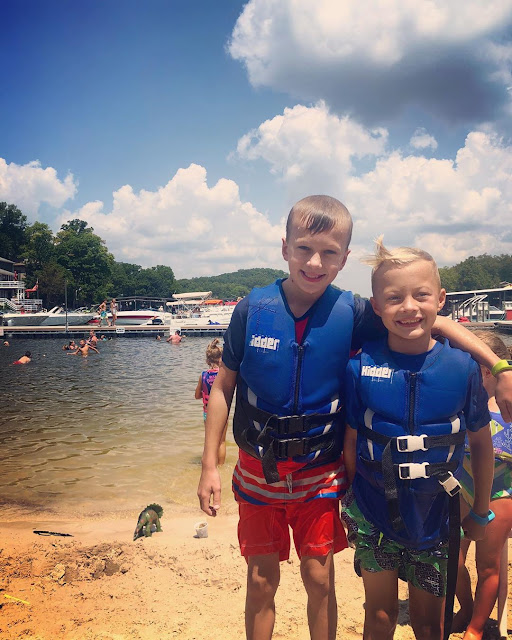 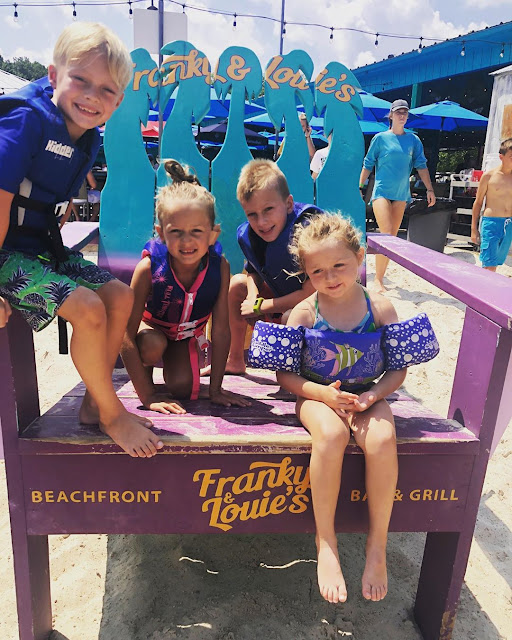 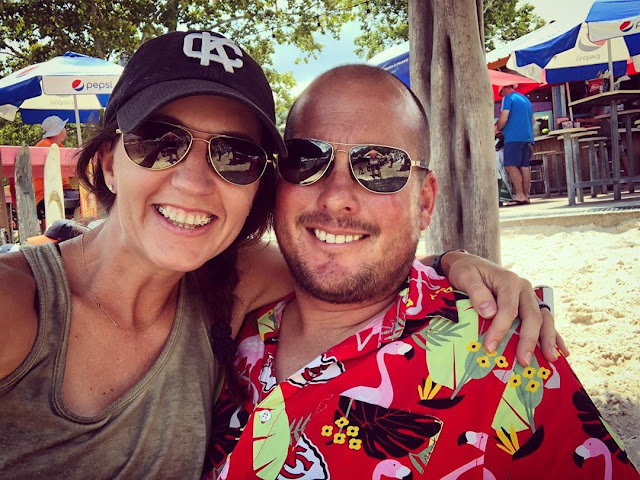 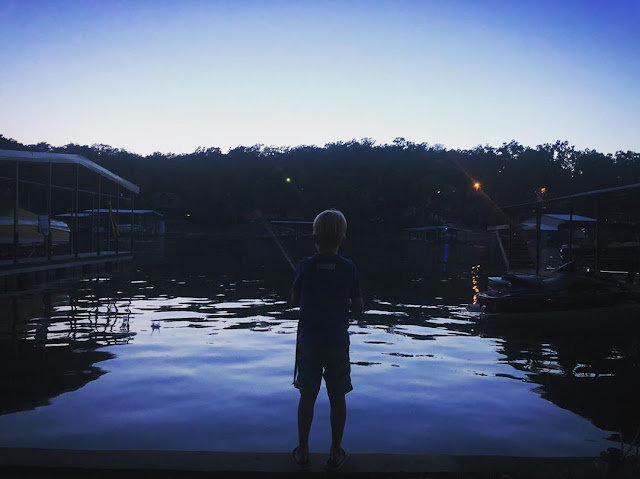 We ended our little lake weekend with a quite kayak ride on Monday morning before loading up and heading home. It was a perfect way to end our summer at the lake, filled with so many things that I love. Summer may be coming to an end but our time at the lake isn't, we will be back this fall. Fall at the lake has become one of my favorite things! 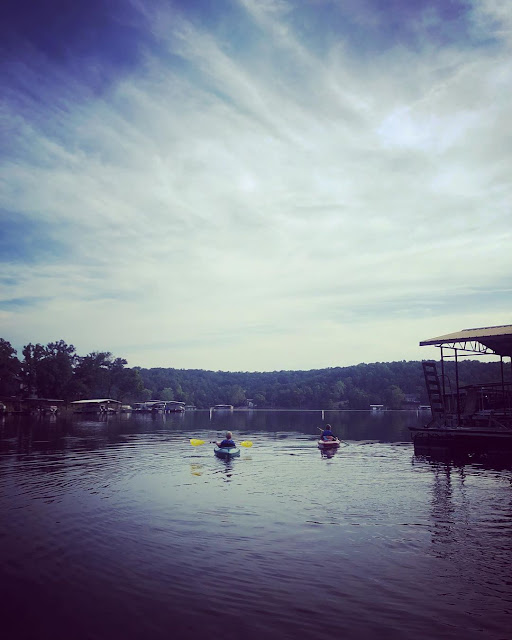