Changing schools also meant we were going to have to rethink our mode of transportation. When we were at Cedar Creek Elementary we had the option of the bus but now that we lived so close, we didn't. Justin and I could figure out how to get them to school, it was the getting home that was more of a challenge. After talking it over with some of our friends from the neighborhood and their kiddos, we decided we would let the boys ride their bikes to school. The plan would be for the South boys to ride up to meet their buddies at the old bus stop and then from there, the four of them would bike to school. & then they would wait for each other after school and once they were all ready, they would take off for home. Kaden's job was to ensure that he didn't leave Logan behind and watch out for him, so he brought up the rear---and for anyone that knows Kaden, that takes a lot as he totally wants to be first and go the faster than anyone else. 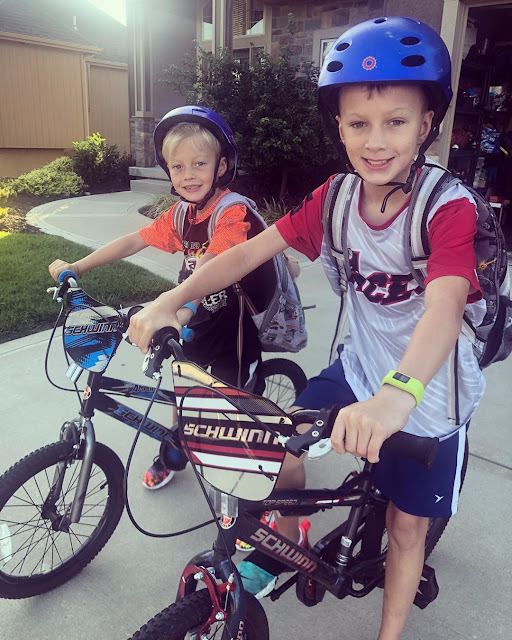 I won't lie--I was a nervous wreck that first day. Would they make it okay? Would they go straight there and straight back? Would they follow our directions? Thankfully, we've got some awesome neighborhood friends and eyes were on them from the moment they left to the time they got to school. One of the moms was tracking them on her son's watch, one of the dad's had access to video feeds and could see that they arrived safely. But my heart was still racing which meant I needed a little more peace of mind for myself. With a little research I found Relay---marketed as a smartphone without a screen. Basically it can track them via GPS and then they can utilize it as like a walkie talkie to talk to me. It allows me to set a "geofence" so when the enter or leave a designated area--determined by me--it notifies me. We ordered them that day, received them the following day and my anxiety was reduced significantly. Thank goodness for technology -- especially technology that ISN'T a phone---they aren't old enough for that yet!

Now winter...winter may bring a slew of new problems. I'm sure we will figure it out though, just like we have these first few weeks.