1-on-1 with Big South at Big Cedar Lodge 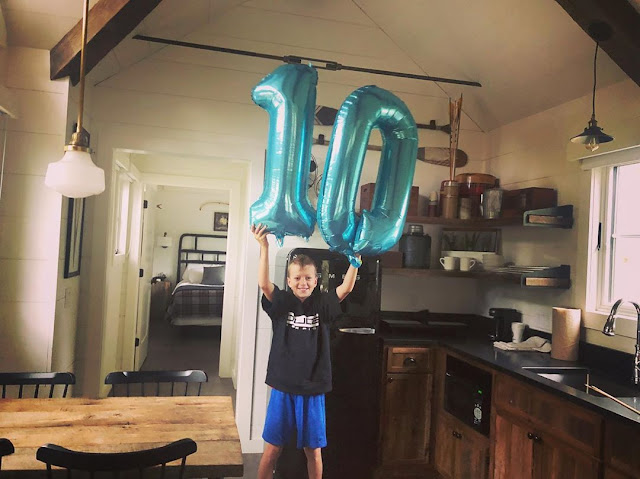 He turned 10. I'm still kind of in shock that I have a ten year old now. This kid made me a mom and here we are, over halfway to him moving out of our home. Goodness, I hope I am doing right by him. 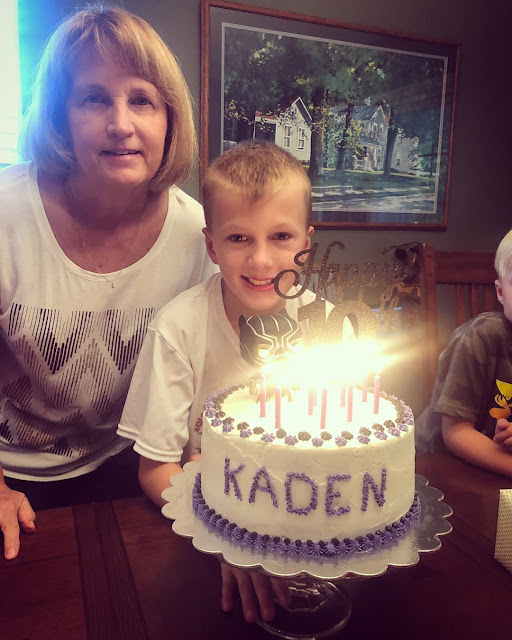 Justin and I decided to do something different for the kids Double Digit birthdays. We have friends who take each of their son's on a special one on one birthday get away for their 10th birthdays and we loved this idea for multiple reasons. One on one time is so important for any kids but when you have both boys, who are relatively close in age, it's even more important. We get a little one on one time here and there with each of the boys but hardly ever is it one on one time with both Justin and I and NEVER is it for any extended period of time. This would not only be something to look forward to but it would be a special time creating memories and saying YES!

We contemplated making it a big trip, flying somewhere neat but in the end, we figured that what was most important, was our time together. In order to make the most of our time, we decided to stick close by--Branson, MO was our destination of choice, Big Cedar to be more exact. & Logan, well, he would get to spend a weekend with Grandma Sara and Papa Tom, which just happened to be on the way. Thursday night after school we drove to my mom and dad's where were celebrated Kaden with Zack, Lindsey, Madison, Trenton, Aunt Kelly and Cousin Kailey. Grandma Sara stepped in for me and made him his cake, he asked for Black Panther and Black Panther he got.

We were up bright and early on Friday and we said our goodbyes to Logan and off we went. 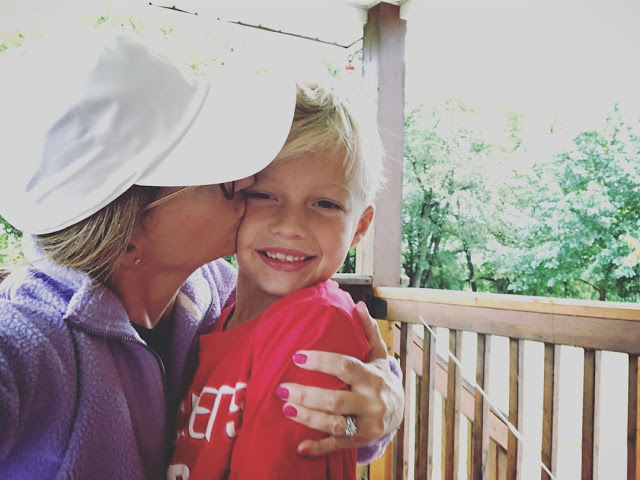 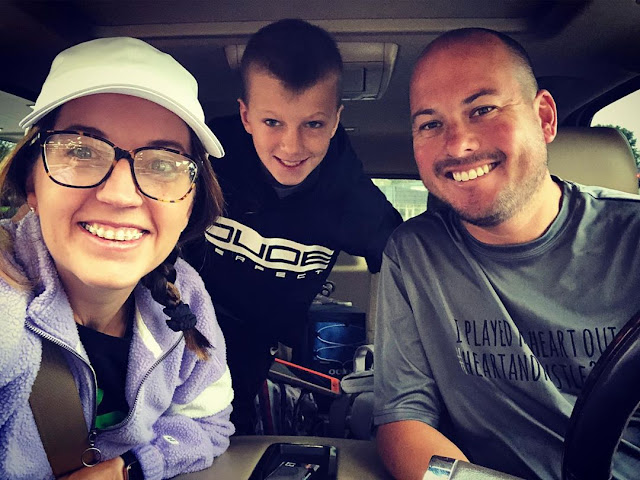 First stop, Silver Dollar City. Kaden isn't the biggest when it comes to riding rides but he loves walking around looking at everything and that we did. He decided before leaving that he wanted to spend his money on a ring and he found one that he could have his name written on and that was rainbow. He was one happy almost nine-year old. 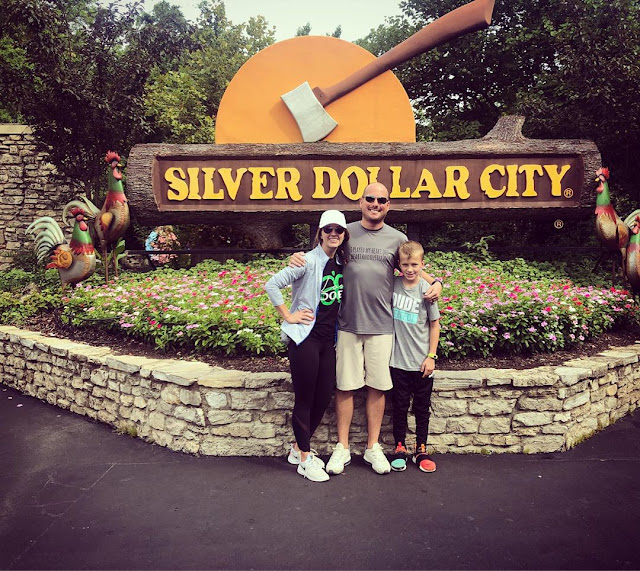 We did manage one ride as a group--Miner's something---basically we shoot targets with guns that really weren't working or maybe they were but somehow Kaden scored over 890k...birthday luck!? 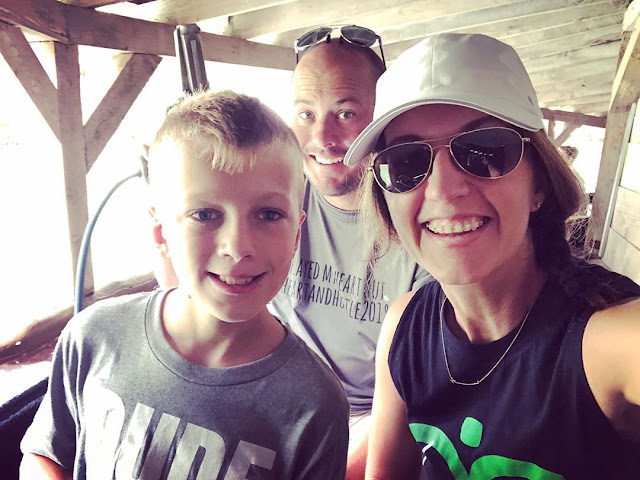 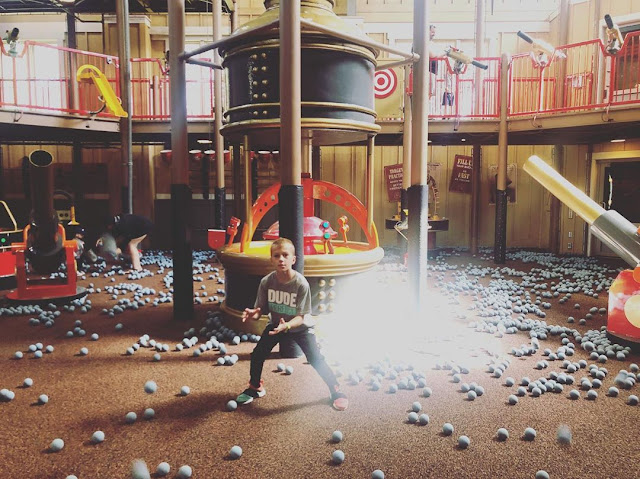 We got some baseball fielding practice in to before we left Silver Dollar City, as well as some yummy funnel cakes--red velvet, Oreo and regular. Kaden and I were in heaven. We didn't stick around all day because we had lots of other things to do - like hang out in the pool.

When we arrived at Big Cedar we found out that we weren't actually on site with Big Cedar, we were at Camp Long Creek which was about a 5 minute drive away. At first I was a little worried because we wouldn't be next to everything but that quickly changed when we saw our quaint sleeping quarters and that it had it's own pool too.

Kaden loved this pool. Not only did he basically have it all to himself but there was a "hot tub" too and thankfully it wasn't too hot so we didn't limit him to just 10 minutes at a time.

At this point of the trip he was still digging that it was just him and us. I had my suspicions that wouldn't be the case after a few more days. 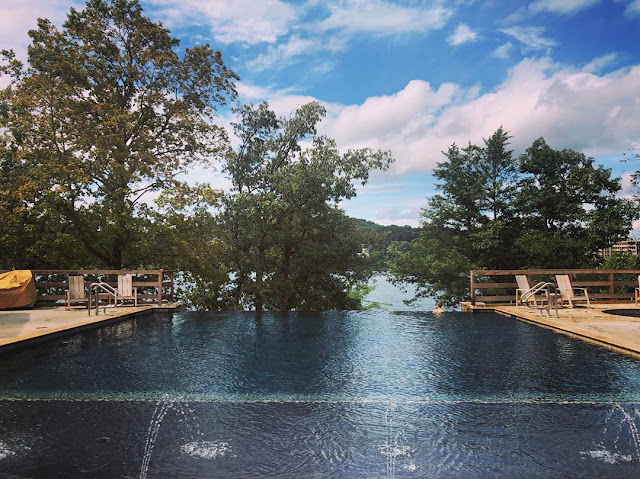 That evening we decided to head back over to Big Cedar and check out Fun Mountain. We played pool. We ate dinner on their outside patio. We go carted. Wasn't sure how Kaden was going to do with it because it was new to him but he did great. Didn't always look like he was having fun but after we were done he said he LOVED it and couldn't wait to do it again. 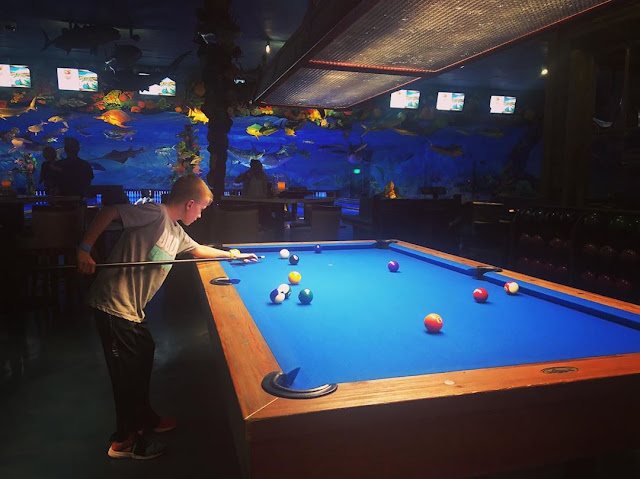 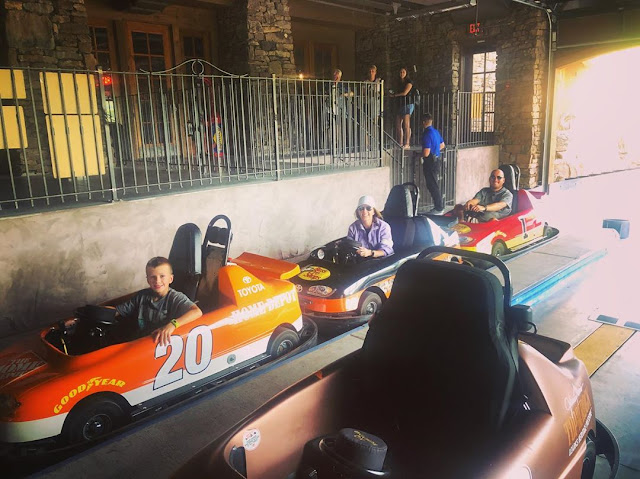 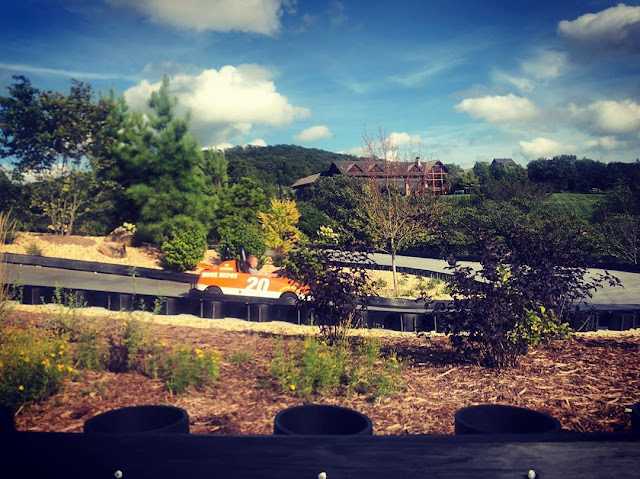 When we returned to our cozy little cabin he instantly asked Justin to make a fire for the Smores they had brought to our cabin for him. Justin obliged and I ran up to the front desk to grab the boccie ball because they had the cutest little boccie course right across the street. We played a few rounds while the fire pit was heating up and then we enjoyed the best Smores a nine year old has ever made. 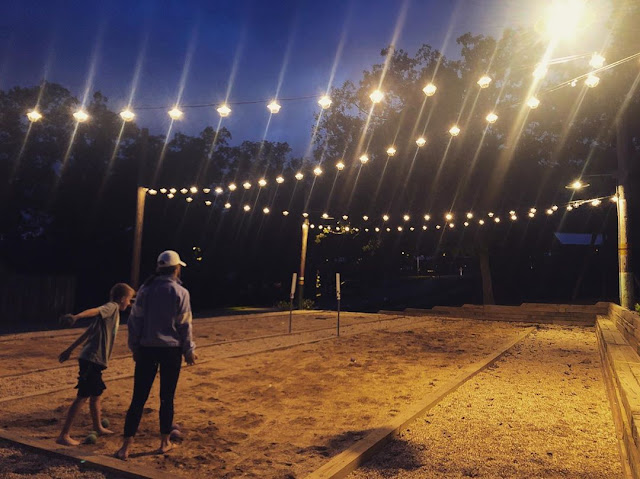 And then it was bed time. Because that very next morning he would be waking up as a 10 year old. DOUBLE DIGITS. I'm not sure how that's even possible. 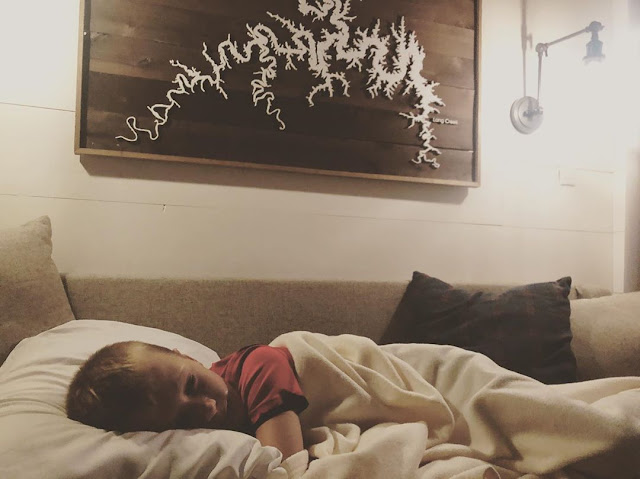 But it happened. We started the day off with some breakfast at the marina and then we headed back to Fun Mountain as both Justin and Kaden were eyeing the golf simulator. We played Pebble Beach that morning and learned that maybe golf is something for Kaden to try out, he has great form. 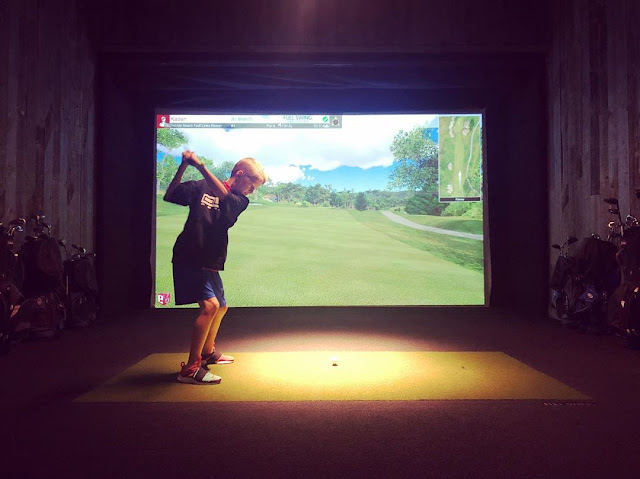 And then we brunched before moving onto the mini-golf course. & by this time, it was getting hot so of course we took him back to the pool before heading off to our surprise evening adventure. 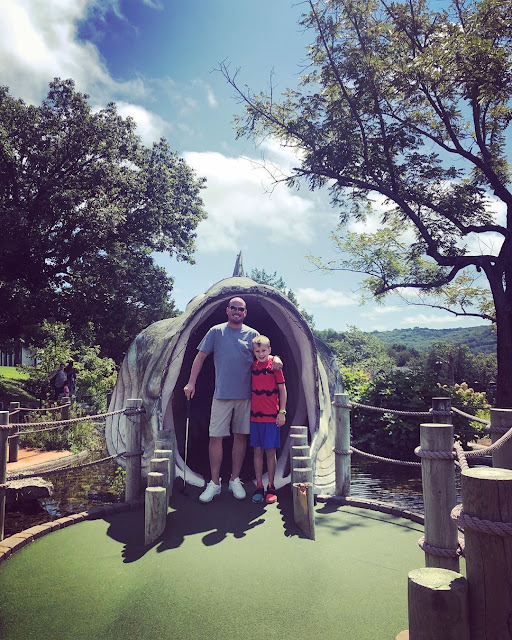 Dolly Parton's Dixie Stampede. At first he wasn't too sure about the whole thing but that quickly went away once he got a better idea of what was happening. And we had to take a picture in front of this stable---GUS. During the pre-show they even wished him happy birthday. His smile said it all. 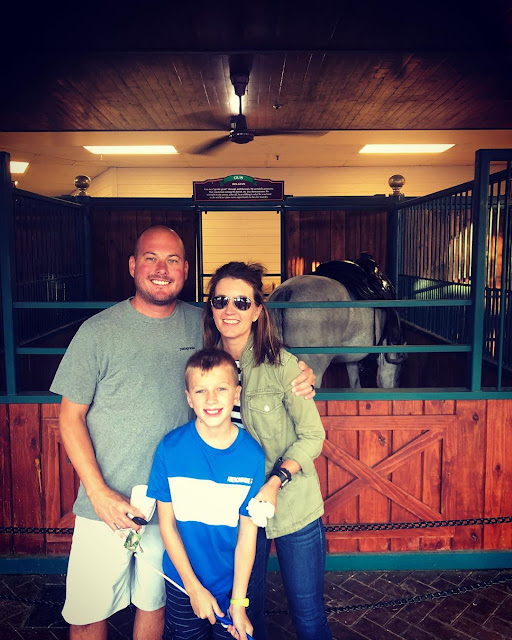 Sunday brought our last full day at Big Cedar. We had the whole day to do whatever he wanted and of course, he wanted to go to the pool again--so we did. This time we picked a pool back at Big Cedar and this time the hot tub was hot so we had to limit his time but he didn't mind as he and Justin worked on his quarterback arm for the upcoming football season. 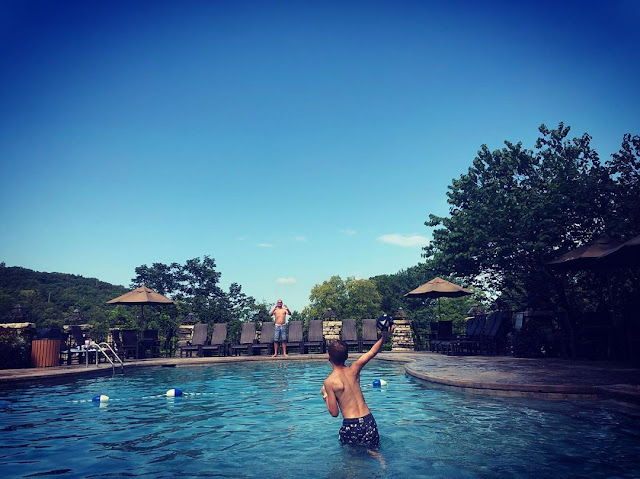 We went back to the cabin for a few hours to relax as we had a big evening ahead of us & when we returned to Big Cedar it was incredibly hot so we did what any smart people would do, we headed back to Fun Mountain. We started off a little laser tag which led into dinner (not on the patio because of how hot and sweaty we were) and that led to Kaden wanting to tackle the ropes course. Kaden doesn't really care for heights and as much as he WANTS to do these things, he often talks himself out of them because his fears get too big. NOT THIS TIME. He walked right up to the course and he went. He may have done the same path a few times and didn't venture up to level two or three but what we did was HUGE--like, brought tears to my eyes HUGE! He was so proud of himself and Justin and I were too. 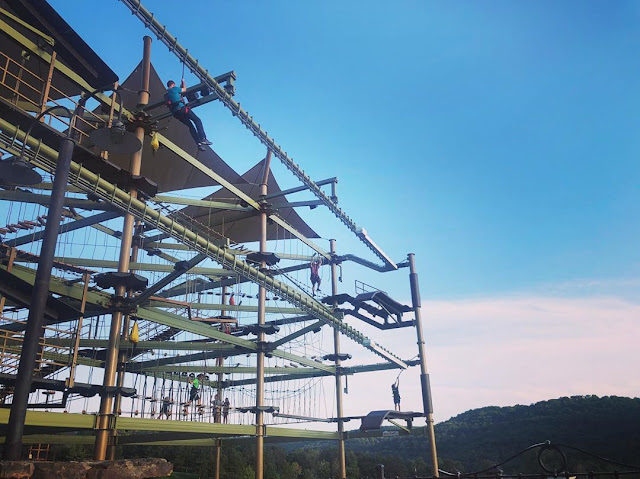 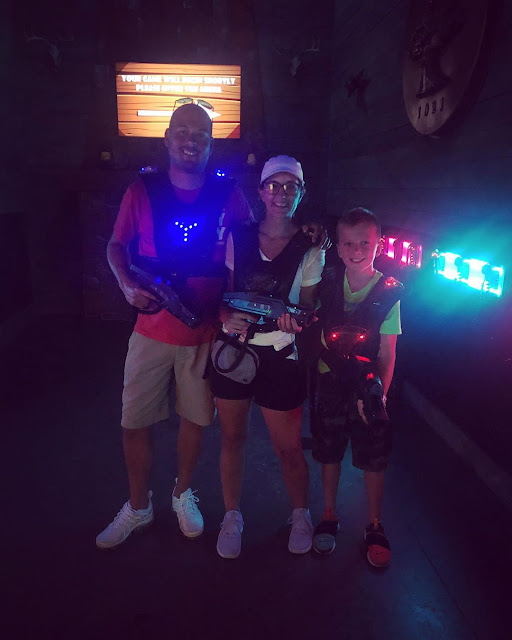 After he got done with the ropes course we headed back over to the Labor Day Celebration where we enjoyed live music as Kaden ran from one activity to the next. He learned how to shoot a bow. He jumped in a couple bounce houses. He played golf again. He went out on a little pond and kayaked.

This time with just him was so very special. It was much needed for all of us. Being able to just be there for Kaden and have him open up to us in ways that he doesn't normally was pretty neat. We learned so much about his relationship with his friends, with us, with his brother, with his doggies. We got to hear about his favorites -- cars, foods, vacations -- he just got to talk about anything and everything knowing he had our undivided attention. 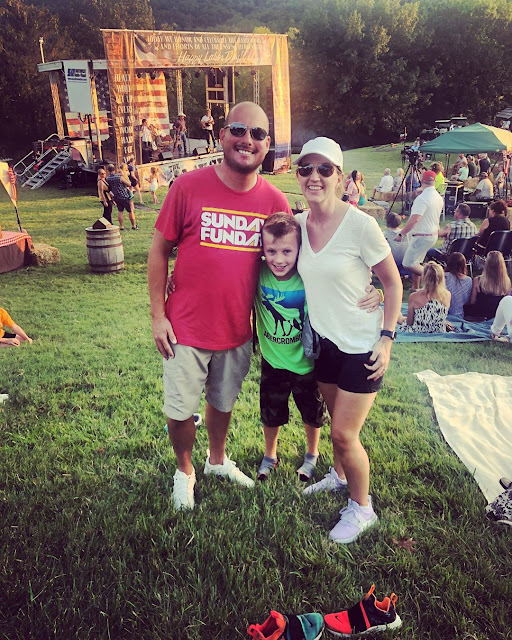 But Monday morning came---which meant it was time to say our goodbyes to Big Cedar and Camp Long Creek and pick up Logan. Kaden couldn't wait to see Logan, he missed having his brother to play with and to share his excitement with. He made sure to tell Logan that too -- and to give him a couple things from the trip---the purple llama from Fortnite and then some hand-dipped candles he made at Silver Dollar City for him.

It was so nice to have the entire family back together just as it should be BUT those three little days away were everything. Everything to me. More importantly, everything to Kaden. 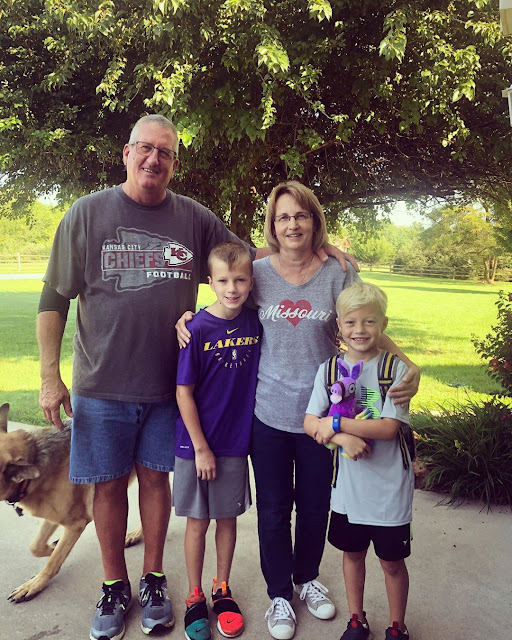