The last week and a half as been one of the hardest weeks for our family. After losing my Uncle Scott in a tragic accident it was kind of hard to get back into the swing of things. We weren't planning on heading to the lake but after being surrounded by family for the last few days, I knew there was nothing more that I would want than to be with family and at one of the most peaceful places we know, our lake house.

So we called Adam and Becky and we asked if they had room for us and they of course said yes. We pulled our stuff together, grabbed groceries and then headed that way once work let out for us both. It happened to be the middle of rush hour traffic AND during construction so it took a little longer than normal but it was exactly what we needed. We needed time with the South side of the family. We needed to be present and just feel each other's love. 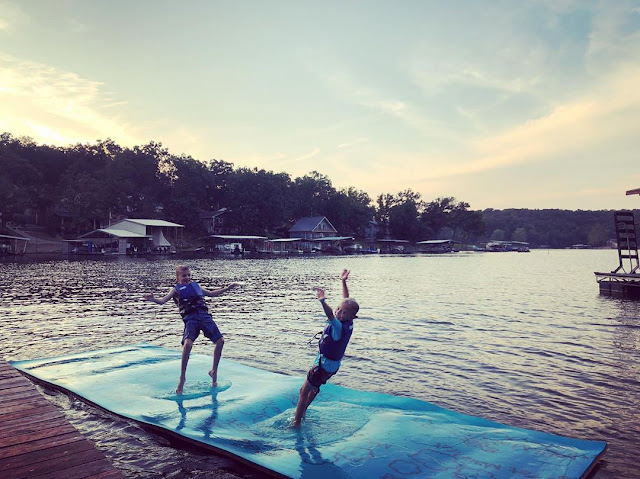 Saturday we ventured out to our favorite new place, The Boat House, for lunch. The boys enjoyed the water, Becky and I enjoyed our drink, and we all enjoyed the food and company. 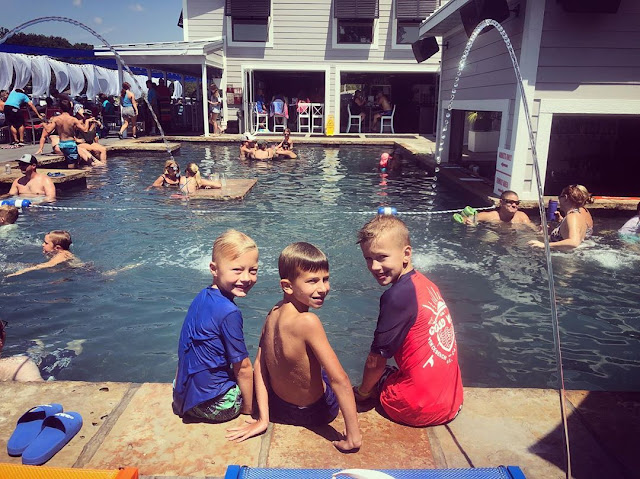 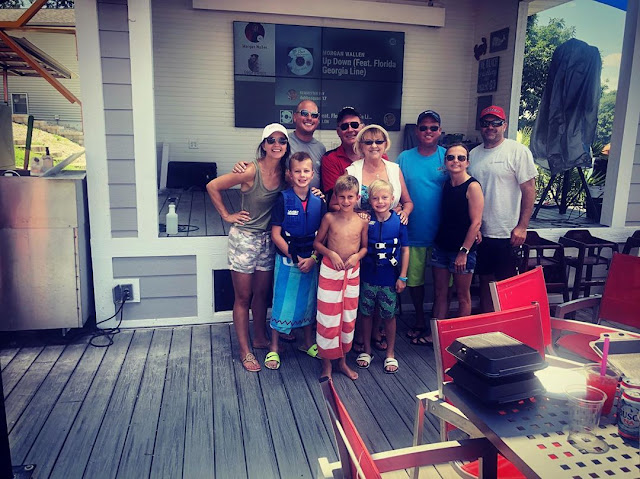 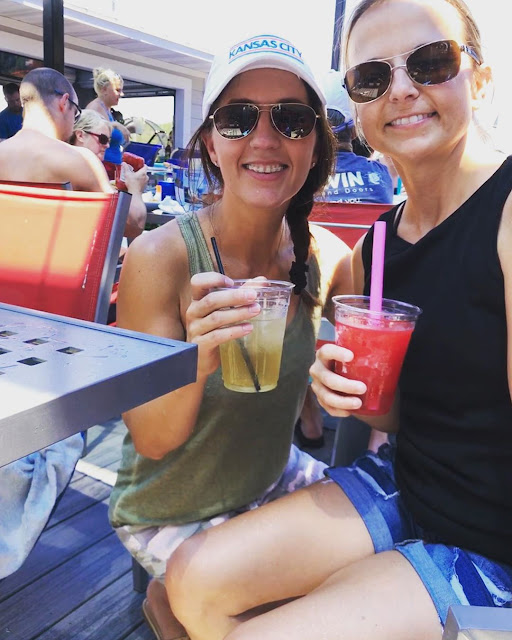 Having the new boat has allowed us to be able to not only venture further out but for all of us to be together on the water too. And Colton and Logan got to test out the wake board. Colton has done it before but Logan hasn't and even though it didn't go as well as what we had hoped, he attempted! He was certainly bummed but nothing a little ride, well in his case, drive, on the sea doo couldn't fix. Colton was up like a pro and rode those waves as though he had been doing it for years. 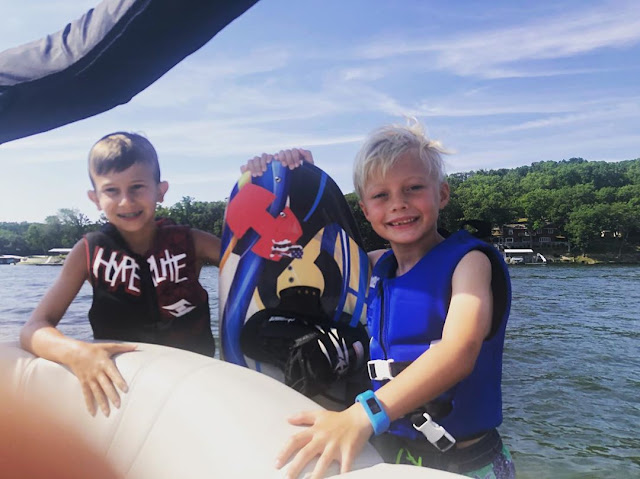 And this kid--even though he isn't our adventurous one, he went out on the sea doo with me and he even let me go out of our cove. We made it up to 22 mph and guys, that is a HUGE win!! 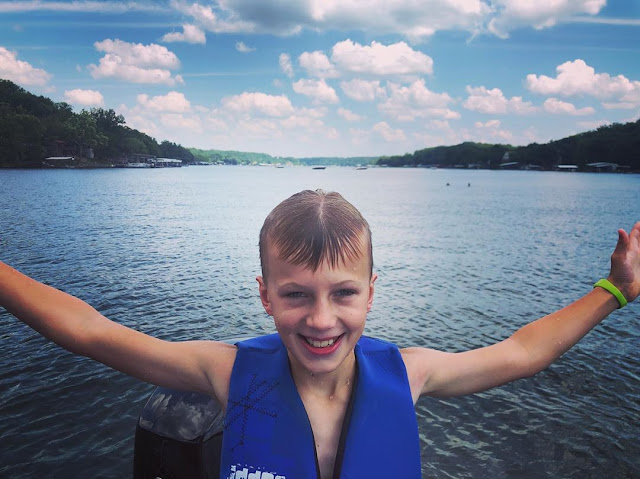 Speaking of the new boat, we all have our jobs when it comes to launching and docking the boat. Justin and Adam are usually in the driver's seat and then the rest of us wait to be called. First up, the buoy crew -- this crew consists of Logan, Kaden and Colton. They are in charge of either pulling the buoys up out of the water and into the boat when we launch or putting them on the side of the boat when we dock. After they are done, they have to remain seated until the driver says they can get out of the boat. Janet, well her job is to remain seated at all times now--she doesn't even get to be part of the buoy group since she hurt her toe helping dock the boat. The remainder of us either stay seated or we help guide the boat into the dock. It's a tight fit so we basically walk it in. It's a lot to do each and every time and I never thought I would say this BUT it's so worth it. 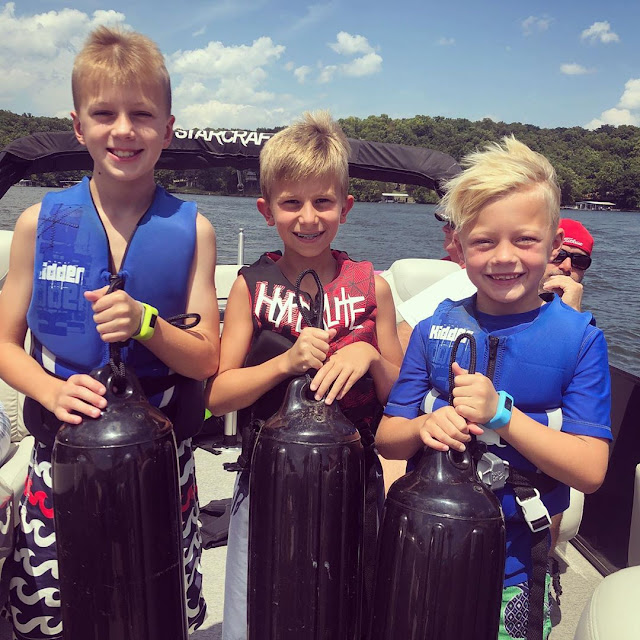 As the boys get older the lake becomes more and more of a blessing. To watch them grow up spending their summers at the lake with their cousin, at the house that their great grandpa built, well, there just aren't words. So thankful for all the family who has kept this little hidden oasis alive and well. It's hard to believe that these boys will be bringing their own families down here one day but I am sure Janet felt the same way and here we are. 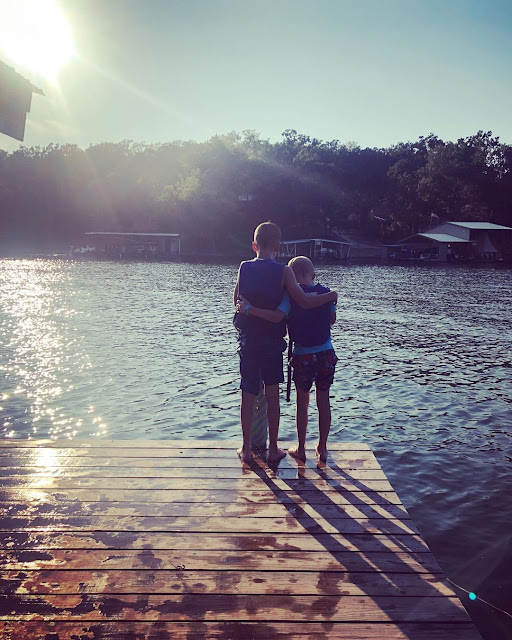