It was birthday party time which also meant birthday cake time but before we could settle on a cake design we need to have a theme for the party. Logan went back and forth between SkyZone, Gaming Truck or a Wild Animal Party. He finally settled with the exotic animal theme as he is a LOVER of all animals & since we had a theme, we had a starting point for cake ideas.

The birthday cake is one of those things that has kind of morphed into a yearly tradition. It started out relatively simple with round cakes & sprinkled ages and then the ideas and the execution just kept growing. We've had a bowling cake, a dog food cake, a smore's cake, a Royals' baseball cake, Super Mario Bros, Pokemon and now a Burmese Python. 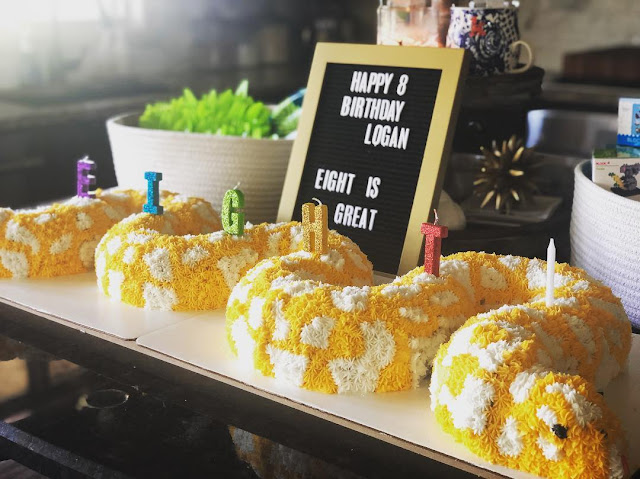 Honestly, it was a little aggressive. Especially knowing that I would be traveling for work that week and wouldn't return home until later Friday afternoon but go big or go home. So while my mom was in town the weekend before, we made 4 cakes and placed them in the freezer. I had Justin remove them for me Friday morning so that I could get straight to work when I got home. We turned four bundt cakes into a three + foot long snake. Now, we had WAY too much cake but two bundt cakes wouldn't have looked right & if I was going to do this, I was going to try and make it look at least halfway decent. Kaden and Logan were both huge helps as they both learned to pipe a little allowing my hand to have a little bit of a break. In the end, Logan was beyond happy & that's all that mattered. 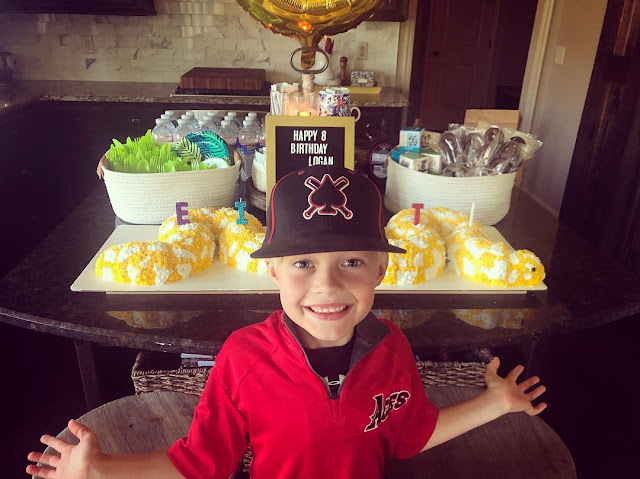 For the party we found a company, J Exotics R US, that would bring rescued animals to our house for the kids to interact with. Not only were they able to interact with the animals but the learned so much about each of the species that were brought. This little armadillo was one of our favorites because he would just run around on his tip toes and no matter where you would put him, he'd head straight for Logan. Plus, he was super ticklish. We got to see some lizard type reptiles, a hedgehog, a chinchilla which felt like a cloud--supposed to be one of the softest living animals and after petting him, we could see why. I got to hold one of the fox relatives -- he loves long hair and then the bigger guy got to climb over all the dads. & then she brought out the lemur -- a real life LEMUR. She was just a baby and she could easily catch a cold so no one could hold her but she loved looking around at everyone. You could tell that Logan was in his element from the first hello. 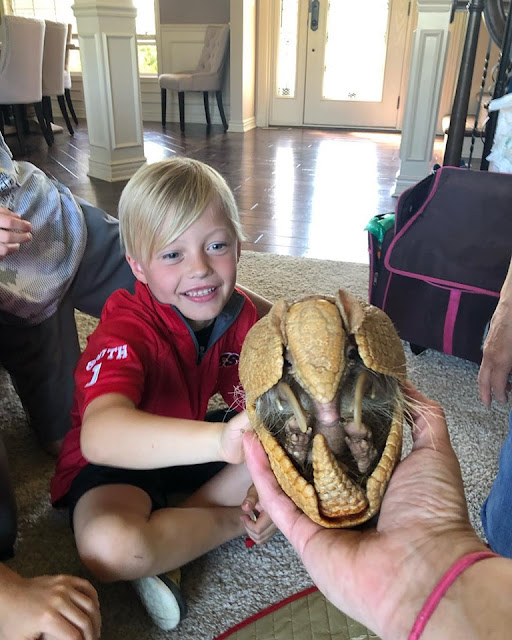 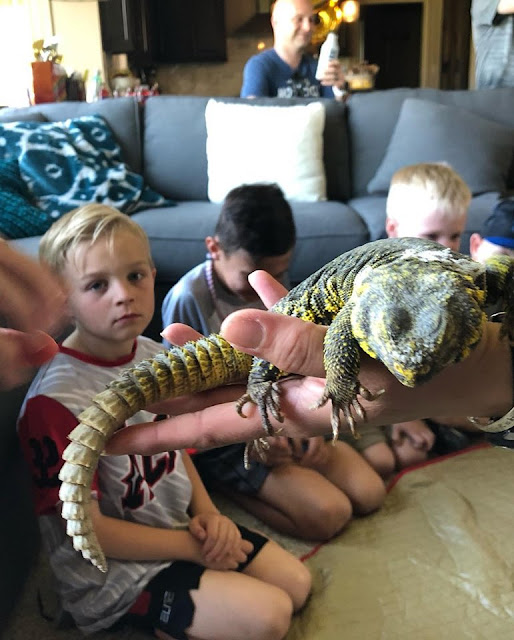 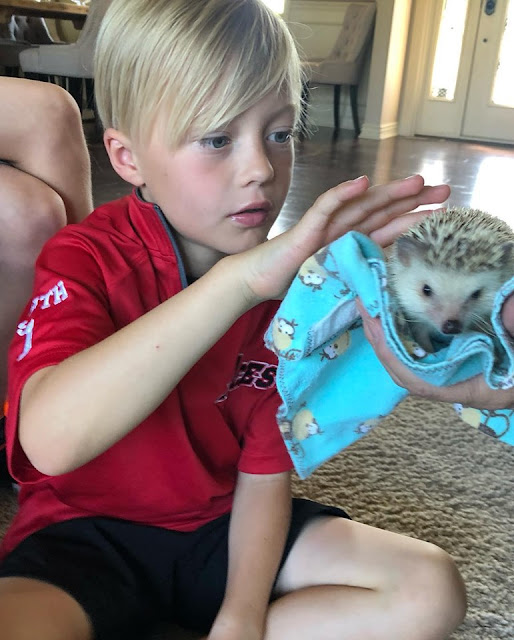 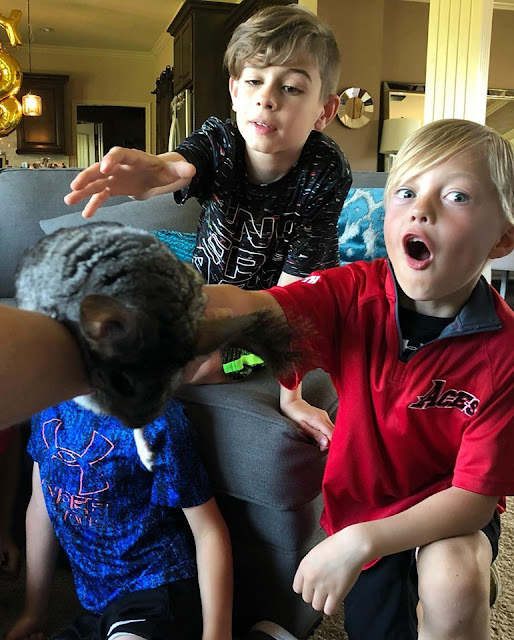 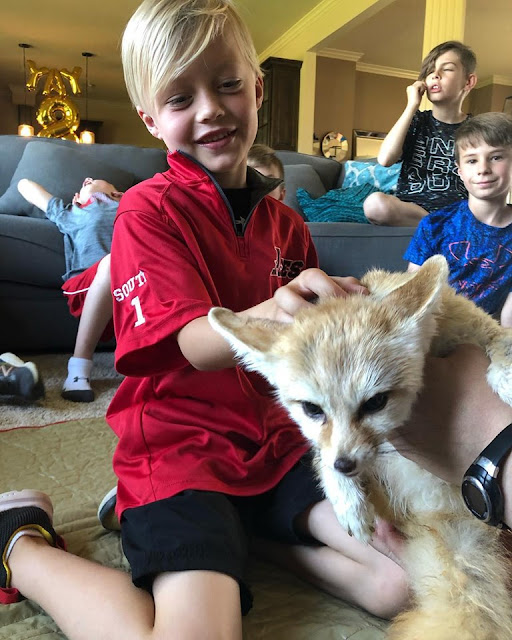 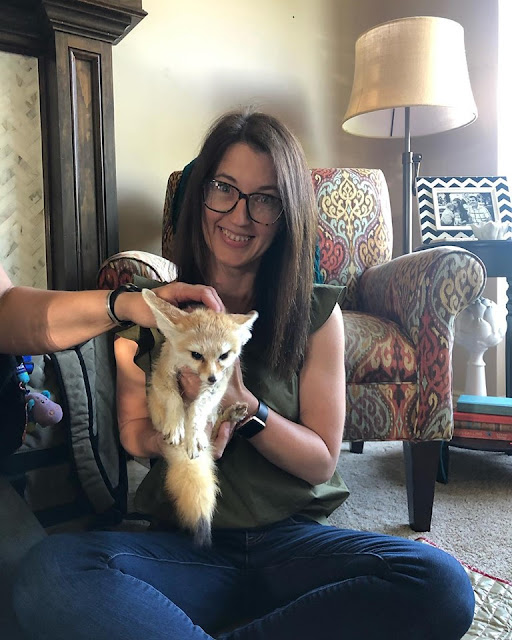 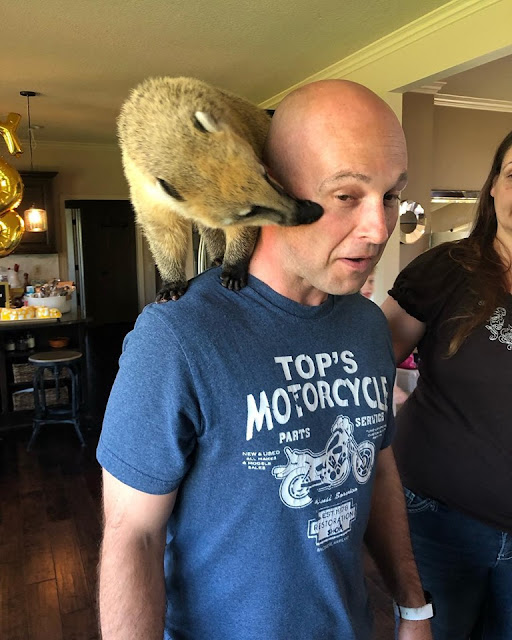 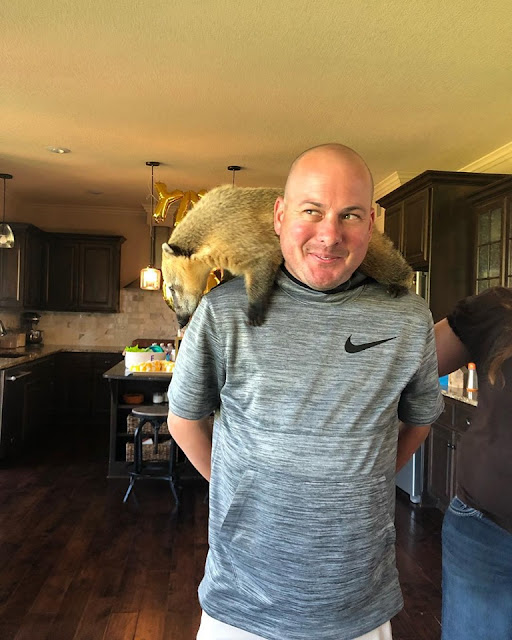 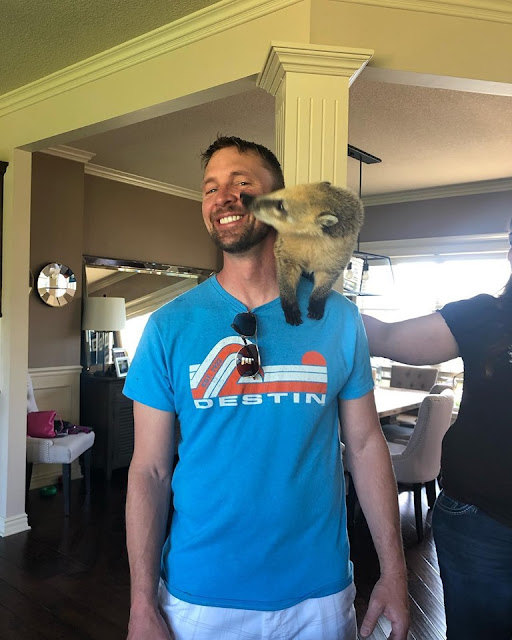 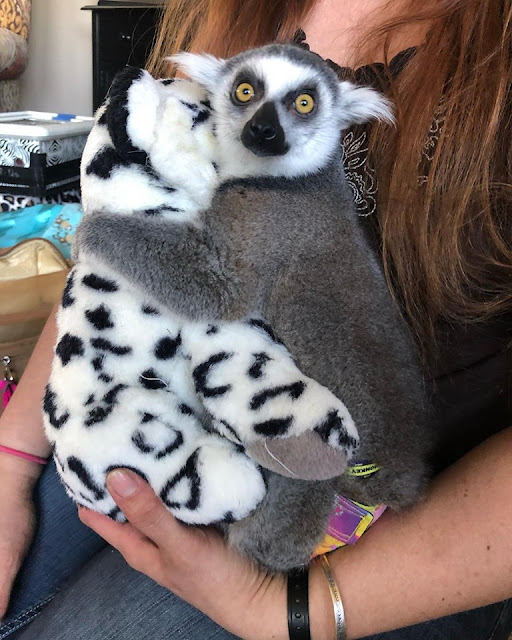 We finished the party off with cake and ice cream & Logan opened a few presents before all his buddies left. At the end, after most of his friends had left, he opened one last present from his Grammy---it was a three part present. 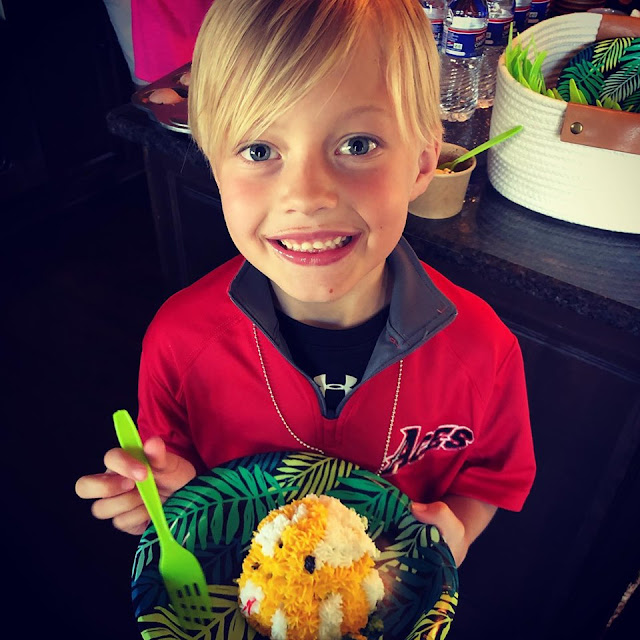 First it was crackers. 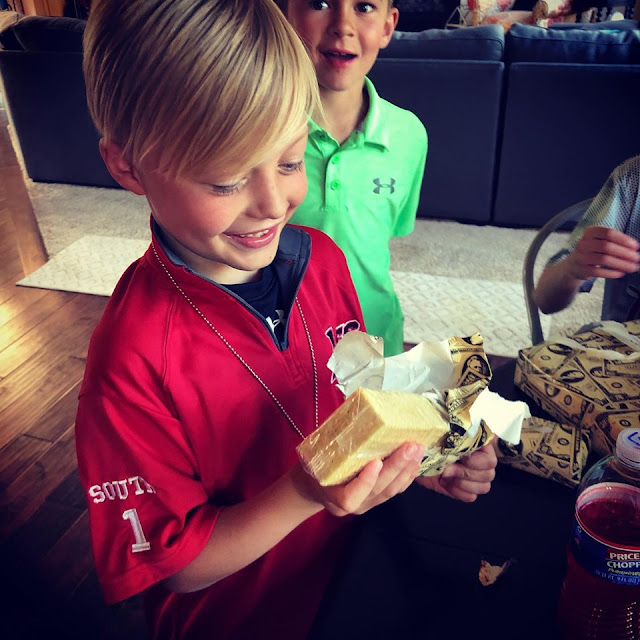 Then there was cheese. 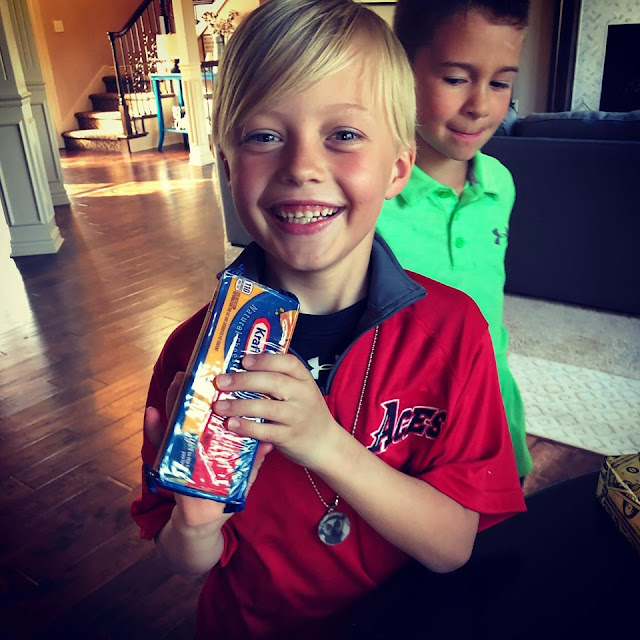 And finally, a cheese cutting board. 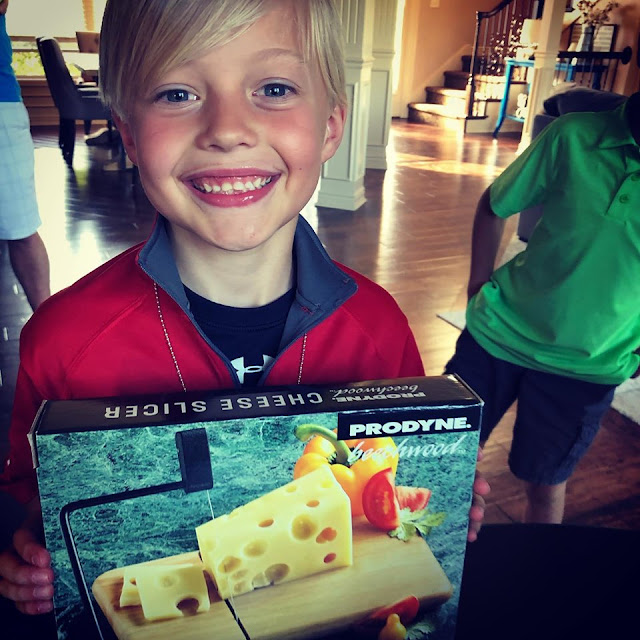 Logan loves cheese and every time we are at Grammy's she always has cheese sliced up with crackers and Logan basically hovers over it until it's all gone. So, now, he has his own board where we can slice his own cheese and you better believe it's gotten lots of use too! 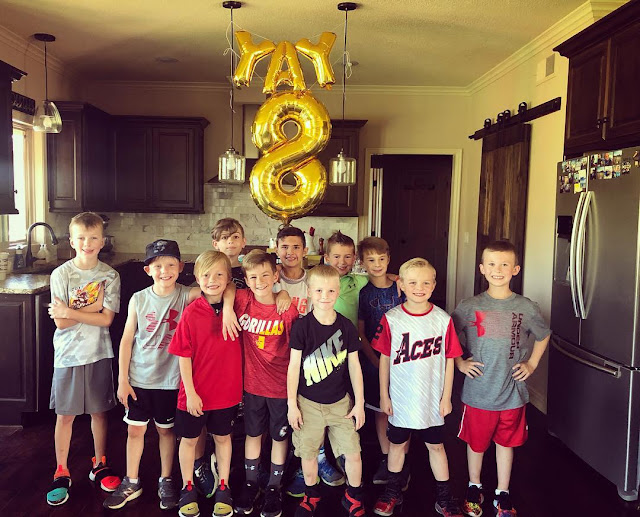 It was a great 8th birthday celebration with some very wonderful friends. We are so blessed that Logan has found such a good group of kids to call his friends & buddies. 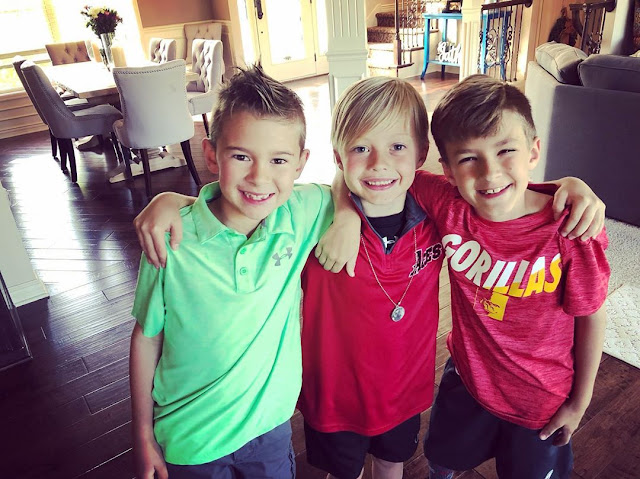