You know when you say something in your head and it sounds like a great idea but then once you say it out loud, you can't help but want to take it back. That's what happened here & it just set off a snowball of changes.

After we returned home from our vacation the house was in desperate need of a good carpet cleaning. I borrowed my SIL's carpet cleaner and I got to work on the carpets. First starting in the living room --which the timing was great here as our new couch was being delivered so we sold the old one, cleaned the carpets and then had the new one delivered.

Logan's room was next. Stoli use to camp out in there and I'm afraid, well, I know she had one too many accidents in there while we were gone. But in order to really clean the carpet we needed to move Logan out for a few days so he slept in the spare bedroom. Next thing I knew, we were ordering him a new bed (this had been promised to him for at least a year now and I kept pushing it off). A new bed meant new bedding because I mean, why not--well, and for the simple fact we didn't have any full size sheets for him. & somehow this snowballed into him moving his entire room into the spare bedroom. Well, me moving it all but him asking for it to be done.

Justin and I talked about, kind of, neither of us saw a big issue with it. Both boys would have their own bedroom and bathroom which was a good thing because sometimes arguments broke out in the bathroom for one reason or another. They would have their own space and neither would have any reason to walk through the other's room unless they were invited in.

So we made the switch. First starting with the closet and you better believe that as we worked our way through the closet that we unloaded a TON of clothes. Some that no longer would fit, some that he hadn't grow into but I knew that since Kaden didn't wear them, he wouldn't either. 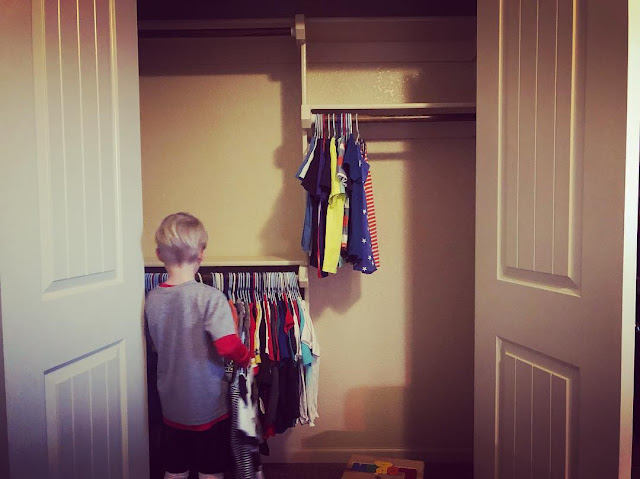 We moved his dresser in--only after having gone through EVERY. SINGLE. DRAWER. We moved Max in to. We ordered a mattress in box and placed it in his old room as it needed 72 hours to expand and once it finally had reached it's stated size we put together his bed. We realized quickly that even though it had some rails, we needed a box spring set to not only give the mattress some height but also so it wouldn't sink through the rails--it was such a soft mattress. I was able to fix the problem bandaid the problem until we found the box spring but that was a story in and of itself. Let's just say, Uncle Adam came to the rescue and measuring might be a good thing to do before buying something like that!

Finally---he was all set. There's nothing on the walls as I have no idea how long this will last but so far, so good. He loves having "his" own space and could care less about the fact that his bathroom is decked out with some girly decor---he's just happy he has his own even if that meant saying goodbye to sleeping with Stoli. 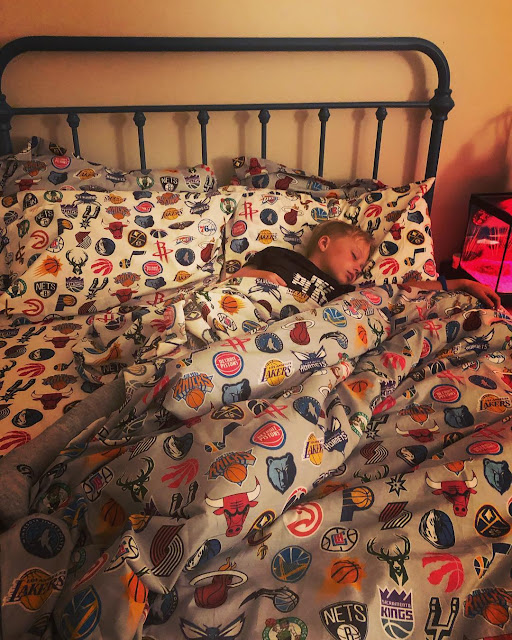