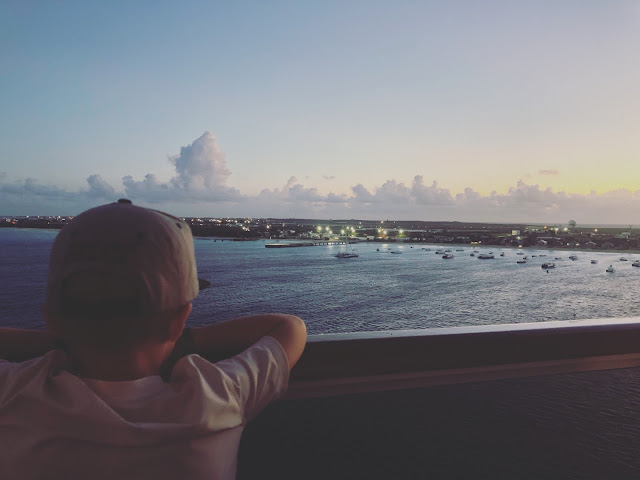 When we were in the Bahamas two years ago I started making the boys go out on the balcony and take a picture of us arriving and we continued with that tradition this trip to. We arrived in Grand Turk nice and early and we had a nice and early excursion too, it was a grand excursion but the boys, Colton and Logan, were looking forward to it. Justin and I would be tagging along too and Kaden had the chance, he just didn't want to do it and he had just pushed through on the SkyRide so we gave him the pass. We followed the crowd off the ship, walked through Margaritaville and headed over to the FlowRider. A wave simulator. This should be fun. 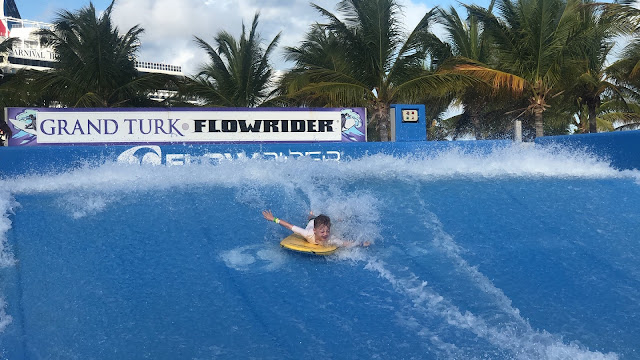 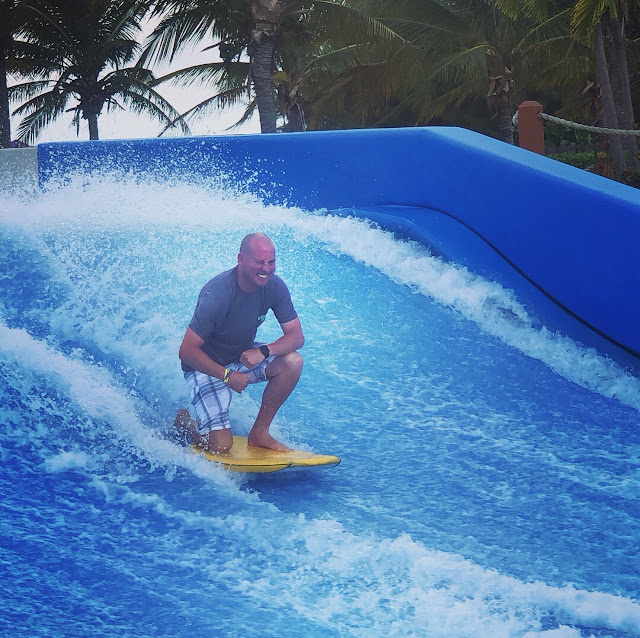 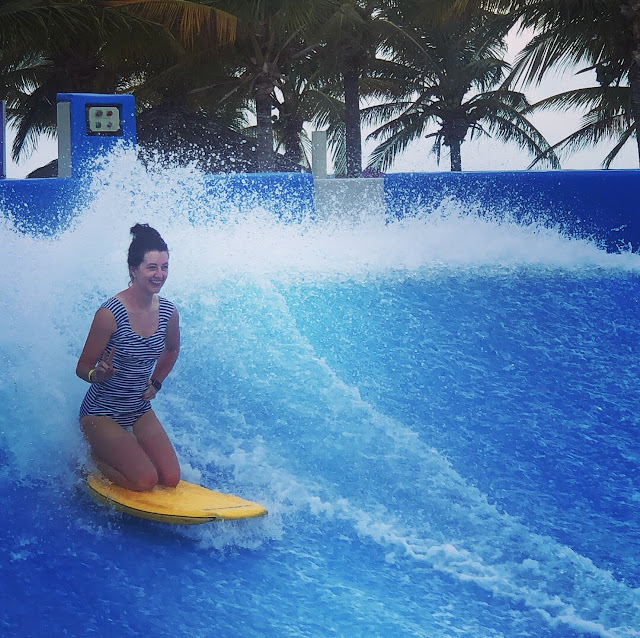 And it was. It was hard work too but I was proud of myself and of Justin, actually, Justin killed it and was pretty much able to do everything they asked him to do. He, Logan and Colton even went back for a second round and tried the surfing part--I was happy with getting to my knees on the kneeboard.   On Logan's second time around he actually stood up (with some assistance) and then held on to it for a few seconds before his epic wipeout, thankfully, he popped right up with a smile on his face.

In between the two outings we headed to the beach which was a very short walk and hung out. The water in Grand Turk was some of the bluest water I have ever seen. Kaden was right at home on the beach. He could be on the beach every single day and never get tired of it. I think I could too. 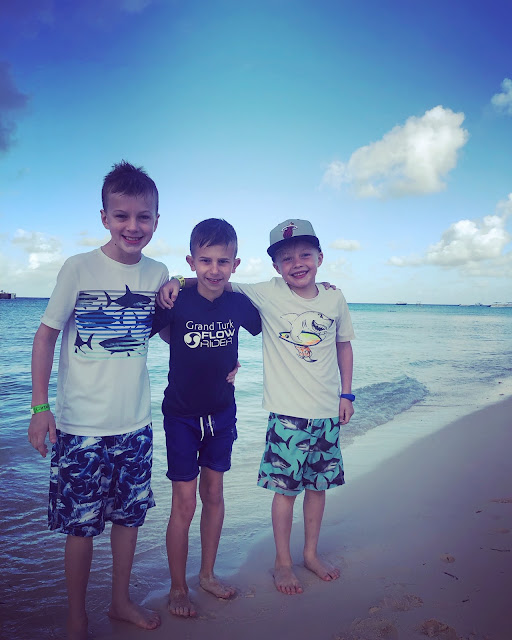 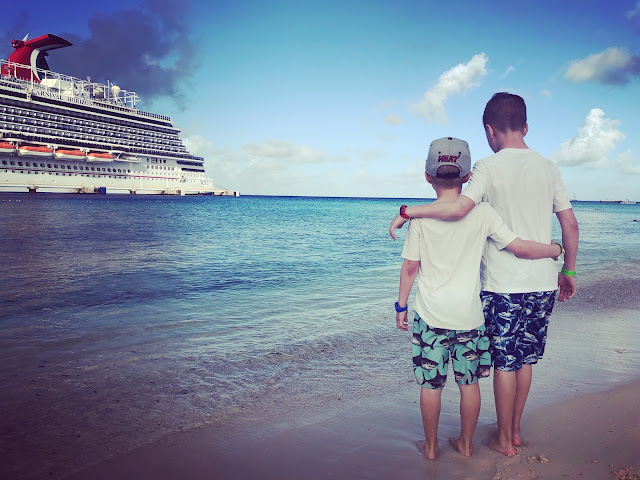 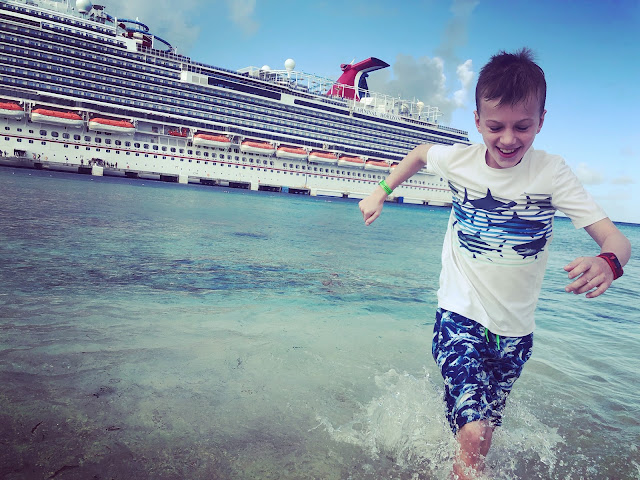 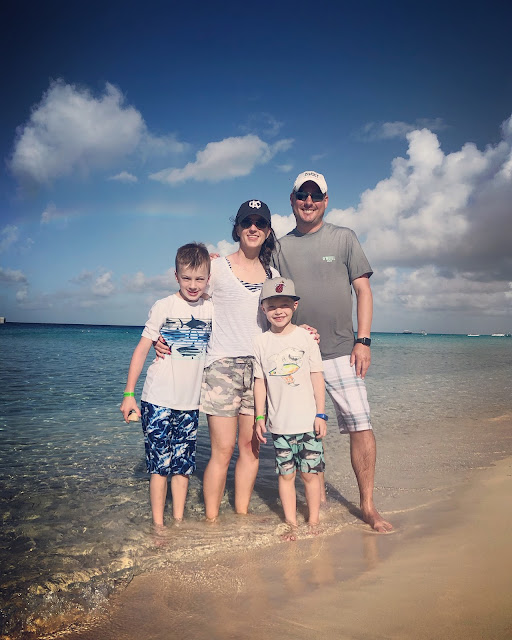 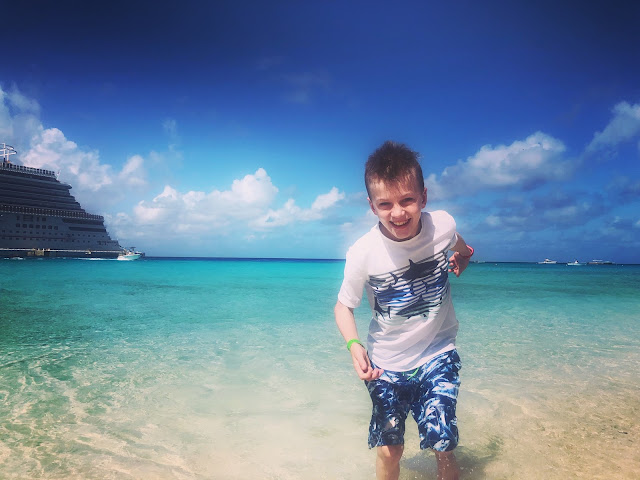 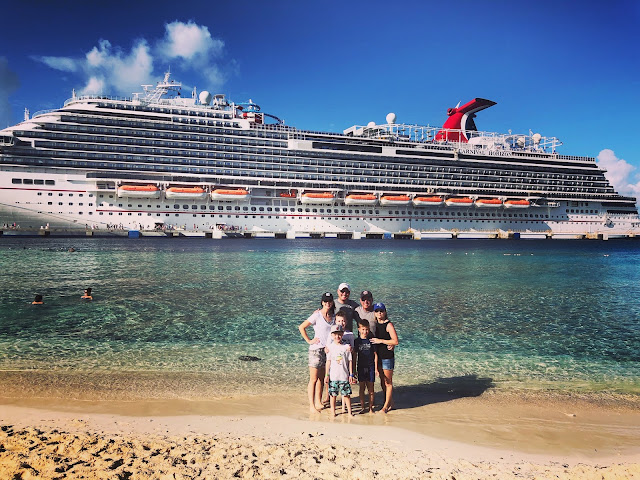 One of the biggest and best things about this cruise happened during this excursions. We found out two days before the cruise began that my cousin, Melanie, and her family were also cruising on this ship, AT THE SAME TIME. We had no clue but we were both sooo excited about it. They too were doing the FlowRider so we decided to meet up there and from that point on the boys were all inseparable. These boys are third cousins and haven't seen each other in over 4 years and have really never spent any sort of time together so knowing that this all happened by chance was something pretty special. It still makes me smile from ear to ear. 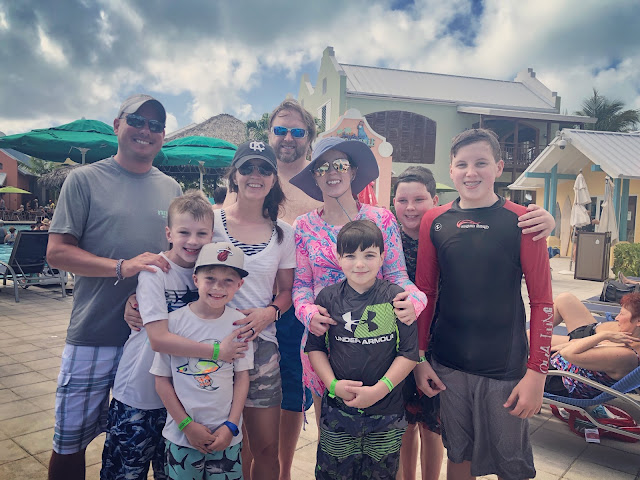 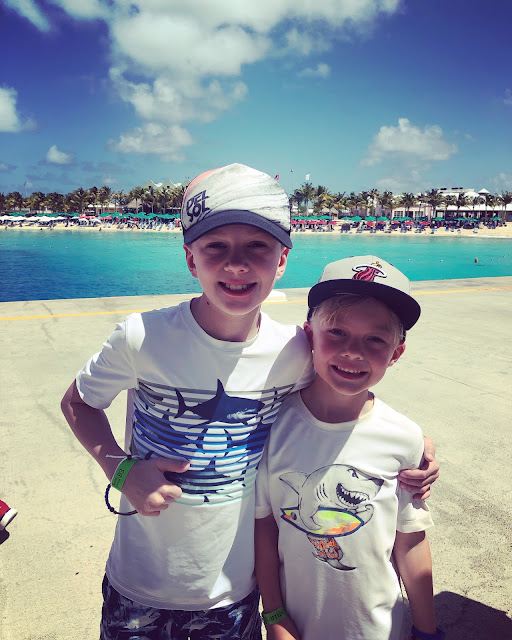 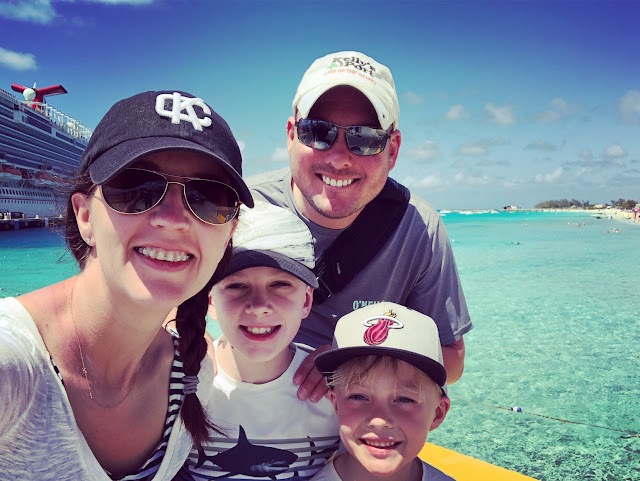 We weren't at Grand Turk long, we had to get back on the ship by 2:00 but we headed that way a little early in hopes that we could find some good seats on the sun deck. Grabbed some lunch and then the boys, all six of them --- Kaden, Logan, Colton, Drew, Dane and Luke --- were off. And while they were off, the momma's went and played too. Becky and I did the SkyRide and then I got to do the SkyRopes with Mindy, Craig's youngest daughter. We ended the evening with some ice cream, a movie and some popcorn. Perfect ending to a great first port. 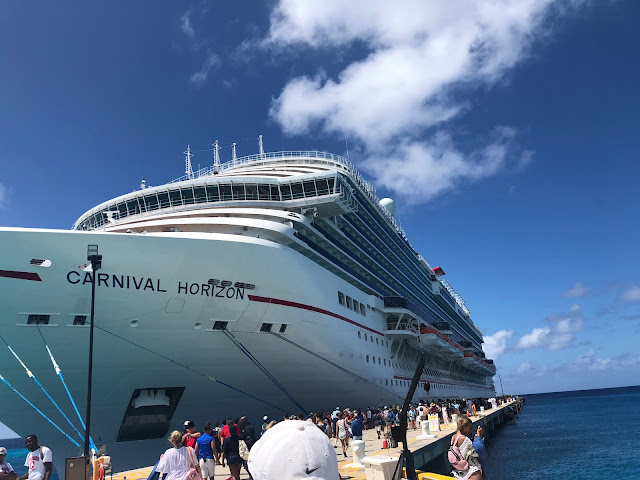 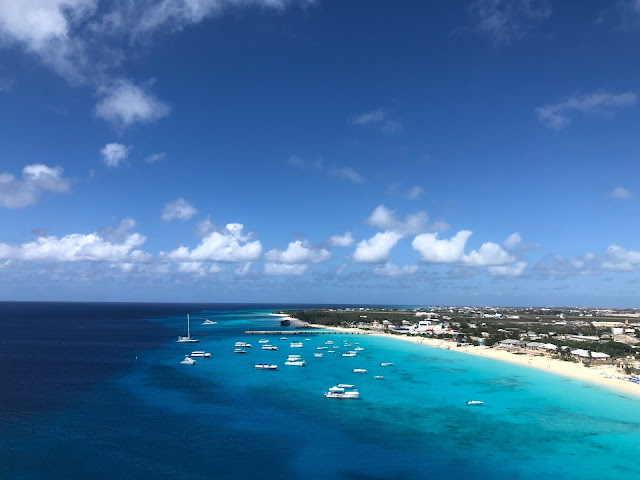 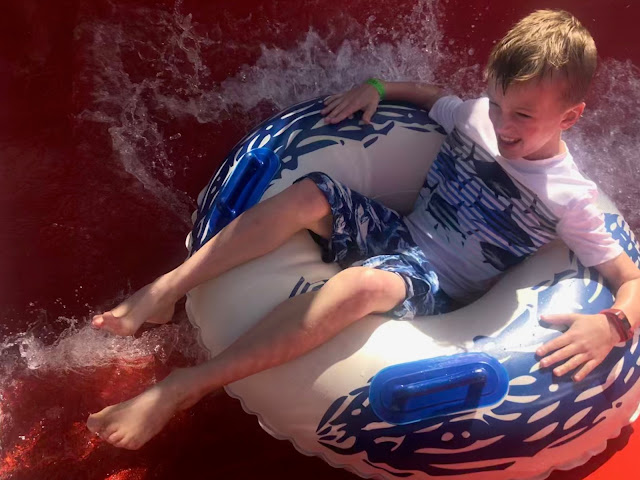 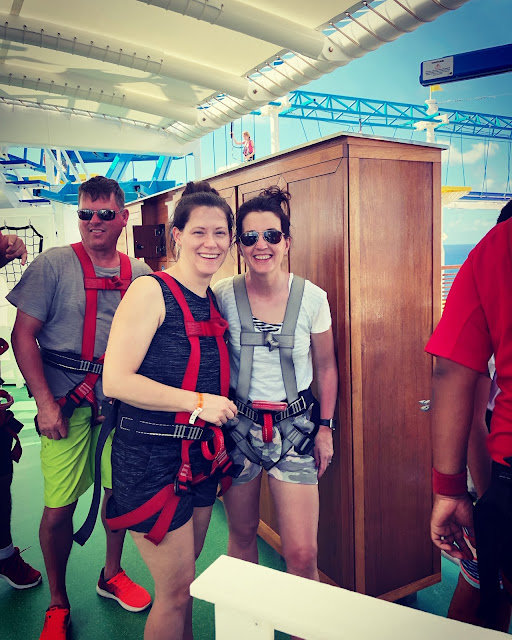 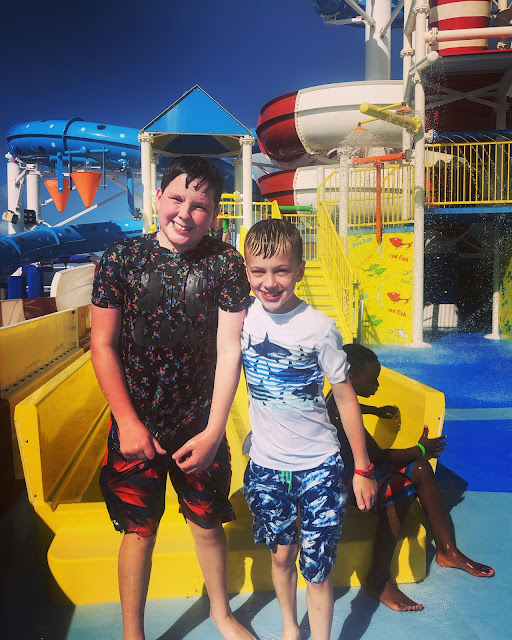 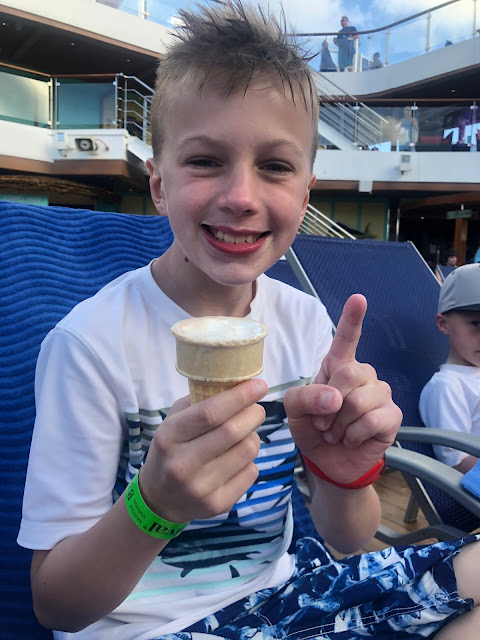 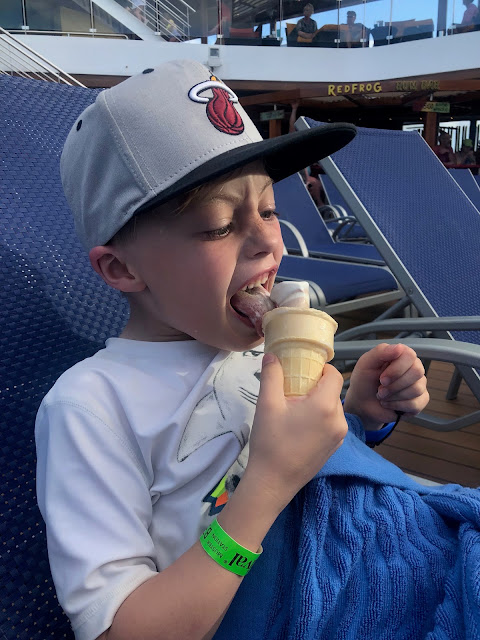