We had been gearing up for this night for over two months--not with Kaden practicing his LINE or the songs but Momma and her friends were in charge of the decorations. I've gotten better at saying NO but when it comes to school--I almost always say YES. So when the music teacher reached out and asked if I could help her out, I agreed and I pulled a few friends into the mix too. We were given a picture of another school who had done this play before and the rest was up to us. We brainstormed and then one night we just went to town & I won't lie, we whipped up some pretty damn good signage. Which also led to us getting FRONT and SECOND row seats at the musical and if you knew our school---you would know why that was such a HUGE thing. I mean, people line up outside in freezing weather 30 minutes before the doors open at their shot at getting good seats---this was a way better way of ensuring we got the best seats in the house! 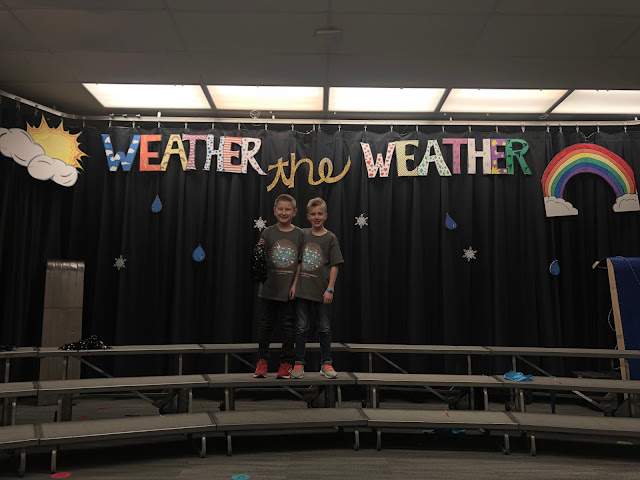 It was show time and Kaden was ready. He honestly, was so excited for this and I loved seeing him enjoy himself up on stage in front of everyone, smiling from ear to ear. 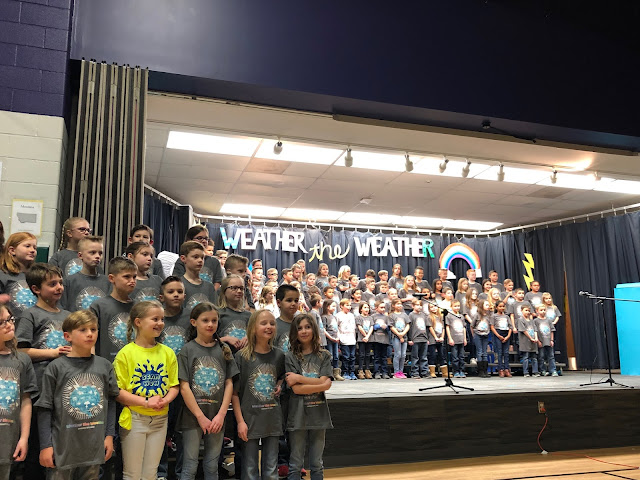 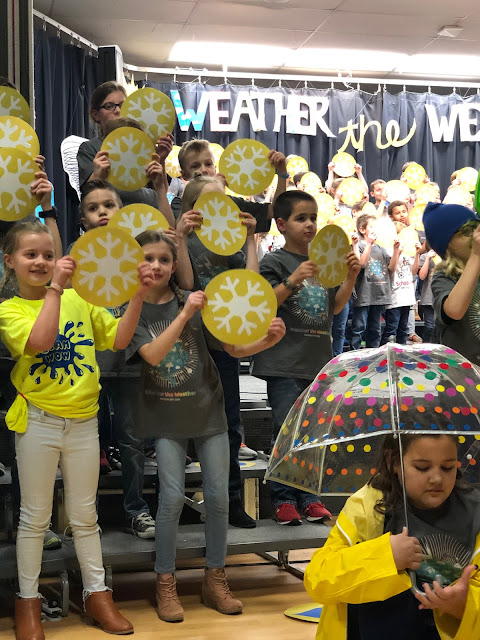 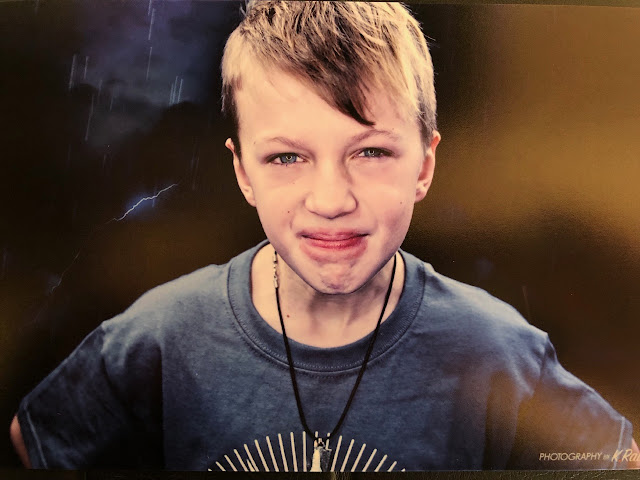 Our music teacher did it again. We are so blessed with such an amazing music teacher and she was one of the reasons we are so sad to be moving schools but we also learned that evening that she's going with us!!! So this won't be your last Mrs. Richard's performance, we've got three more still! 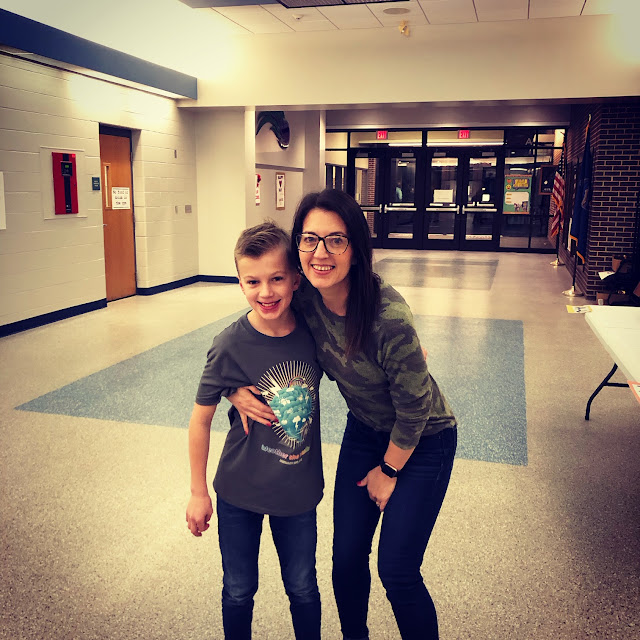 Posted by Kayla South at 9:09 AM No comments:

One of these days these boys will get a full week of school in but not this month. Without fail the winter weather has kept them at home for at least one day a week since returning after school break. Thank goodness for friends and play dates so that I can get some work done from home. 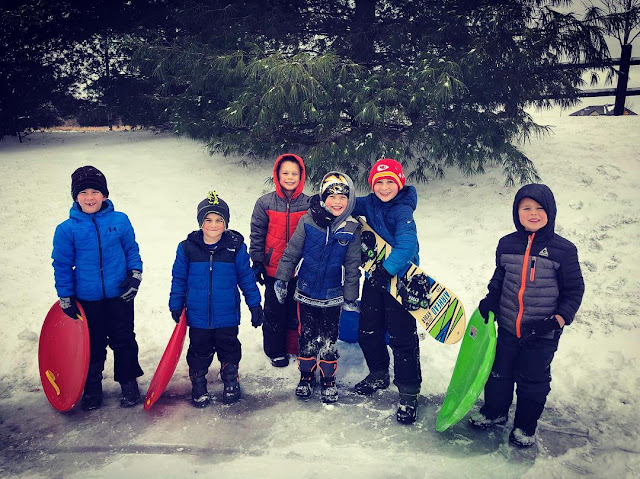 & for projects too. Not only did it keep the boys busy for awhile, they were super proud of what they were able to accomplish working together. Now, if we could just get some relief when it comes to the winter weather---we really don't want to be going to school in June, that will be cutting into our lake and pool time so Mother Nature, we beg you, please bring us sunshine and warmth. 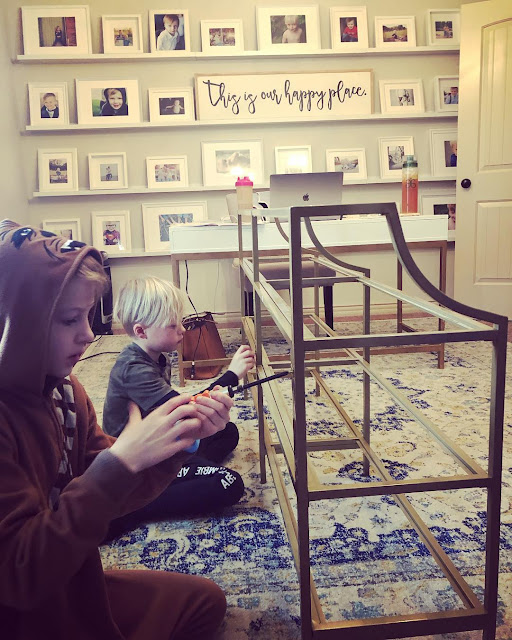 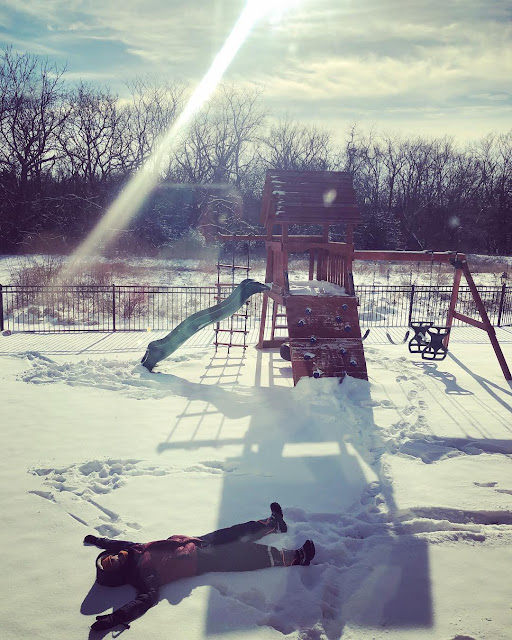 Posted by Kayla South at 9:08 AM No comments:

Mahomes wasn't planned to be a part of the family so soon but here he is. 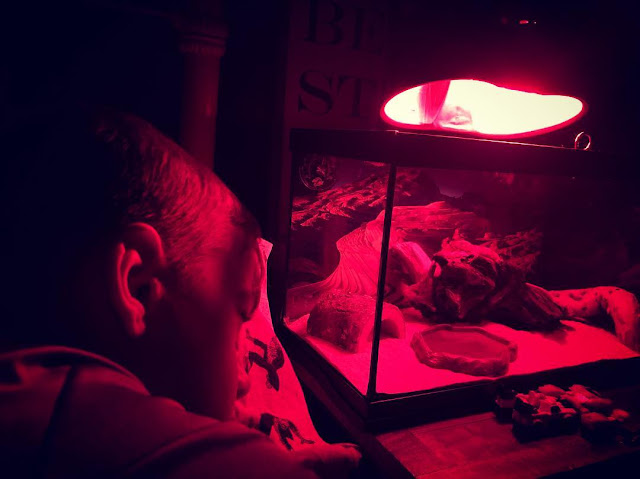 So how did Mahomes come to be? Ever since Logan got his leopard gecko for Christmas from Santa, Kaden, has wanted one too. Now, mind you, Kaden isn't the biggest fan of "animals" especially reptiles. Yet, he took to Max. He wanted to help feed, water, clean its cage & he wanted to hold him. He loved holding him and Justin & I both were so shocked to see him take so easily to Max.

But when he asked for one we both said that he would earn one or work for one but that he couldn't just "get one". He understood but was still sad that he'd have to wait. His Christmas present from Santa was in the garage and he couldn't wait to ride it some more. & then the warmer weather came and we were able to get it out a few times and that's when we realized it just wasn't working. We would charge it per the instructions and it would literally run to the stop sign and then they would have to push it back home. Hours of charging for minutes of play.

So, I started looking into what we got him, the Vega Viro 2-in-1. I saw that on Target.com there were a number of reviews that weren't good. So I left my own in hopes that someone would reach out to me or leave a number to contact like one of the other reviews. A few days later I went back to check the review and you couldn't even find the item--they had removed it from the website. So I called. Long story short, we ended up taking it back. There wasn't any replacement available but they said that I could bring it and they would give me our money back. Although I knew this is what needed to be done--my heart broke having to do it. He wanted that so badly for Christmas and it was from Santa. And Santa's elves went so far out of their way to track this gift down and get it back to KS in time for Christmas. I'm talking Tucson, AZ to Lenexa, KS. What we will do for our kiddos. Again, though, I knew what we needed to do so I talked to Kaden about it, we had days left until the return policy would lapse. I explained that I was so sorry that his Christmas present from Santa wasn't working and that I had figured out a way we could maybe make it right. What if we took it Target, per Santa's suggestion, and then instead of getting a new one, we could get a gecko for him. His eyes went straight from being filled with sadness to being filled with joy and excitement. He was all for it.

So, the following Friday Justin loaded the scooter up and I took it back. I then walked next door and loaded up a gecko and everything we need to give it a home. And a home Kaden has given him. He has taken such great care of Mahomes and just loves getting him out to play with him. I think they'll be best of buds and good news---Mahomes will be around a lot longer than that scooter would have been. Not the way we thought it would shake out but it certainly was meant to be.
Posted by Kayla South at 1:11 PM No comments:

The forecast called for snow and for once, it was right and it just kept coming. We went to sleep Friday night with hardly any snow on the ground and then we woke up to a winter wonderland.

Gorgeous was an understatement. 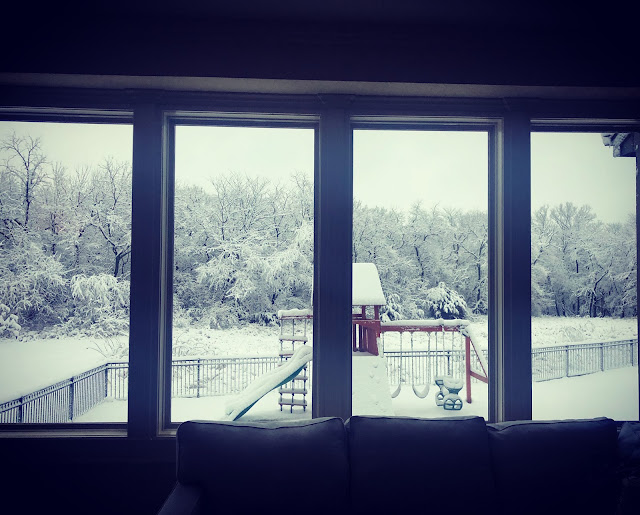 And of course the boys were dying to get outside -- they just wanted to run and play until their toes fell off and they did. Their dad surprised them by getting the golf cart out and taking them sledding. They were in snow heaven. 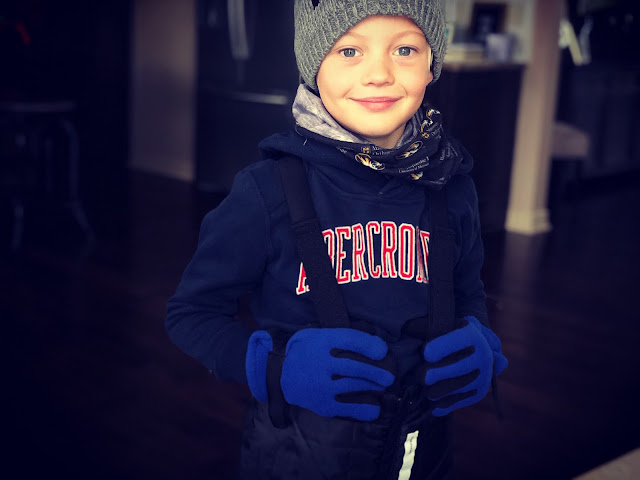 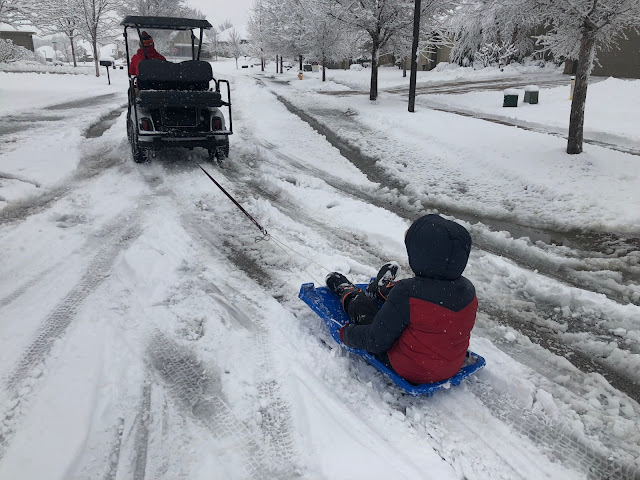 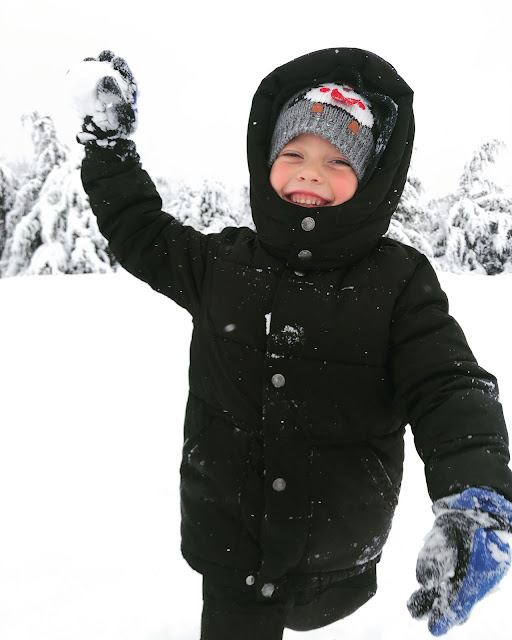 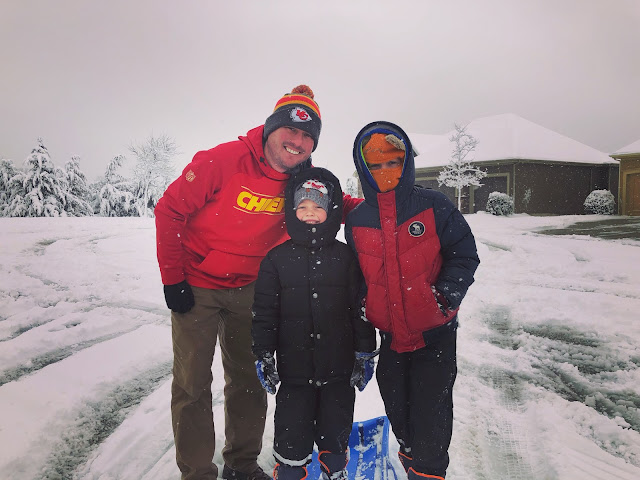 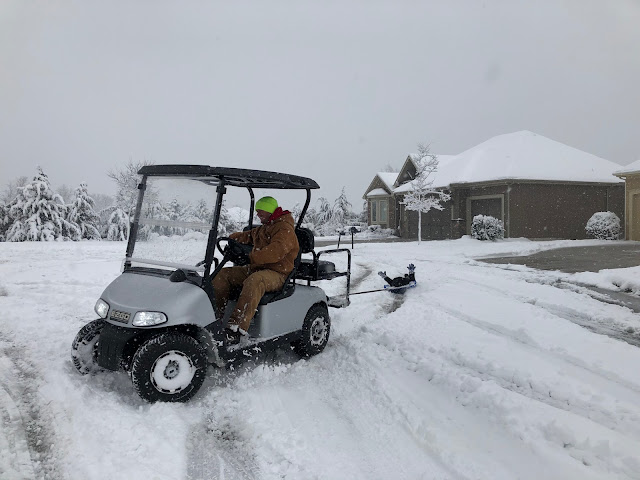 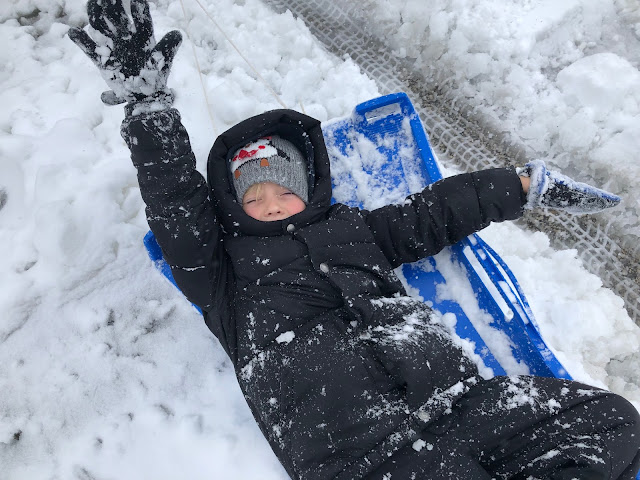 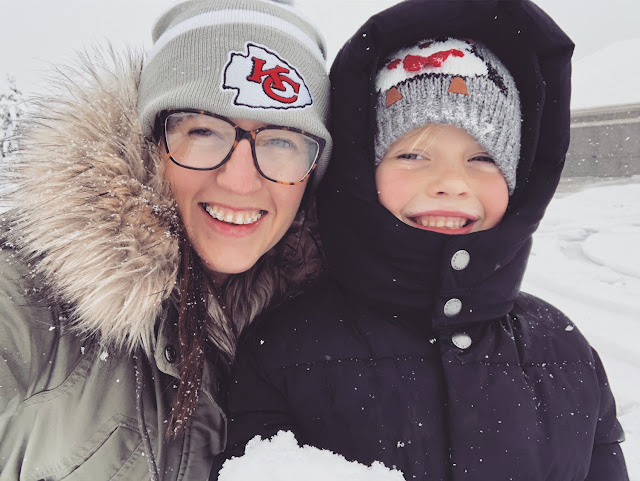 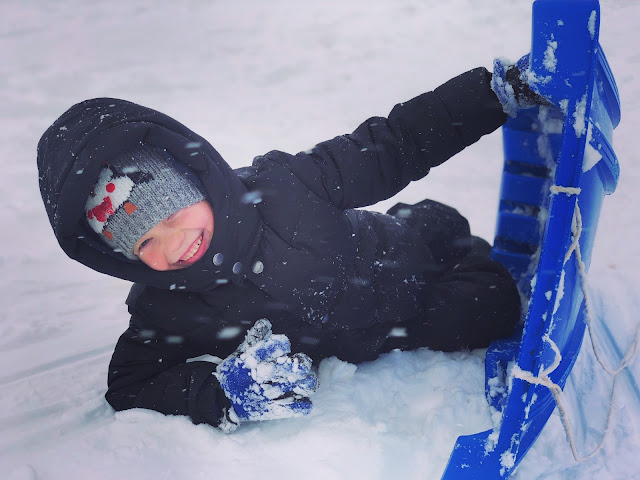 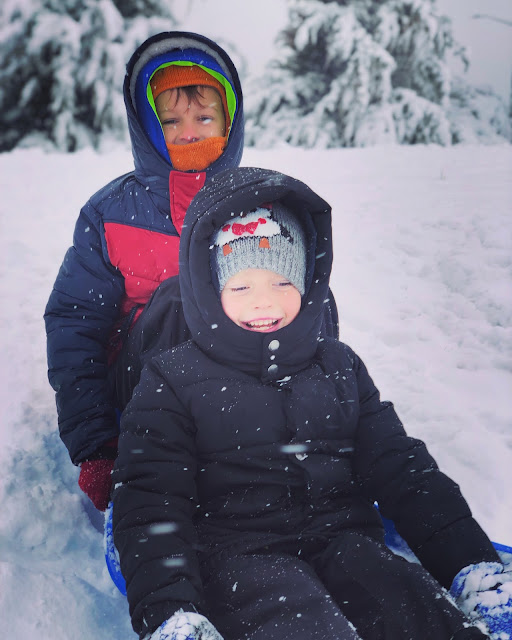 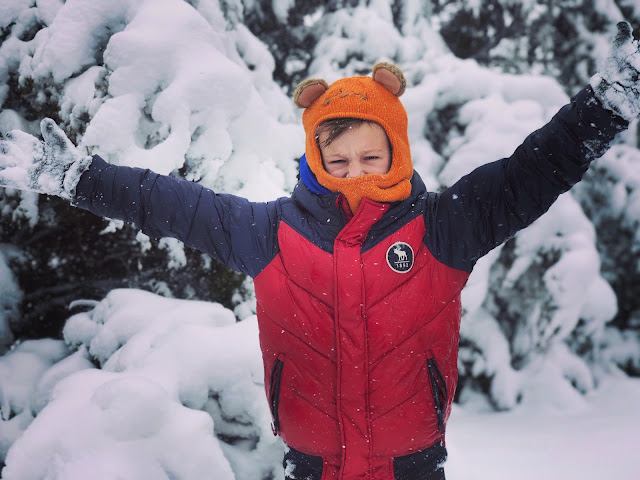 Of course all of our activities were canceled for the day except the big Chiefs game so after we played in the snow we loaded up and ran to Kansas Sampler to get some new gear for the game. We were ready--we were ready to roll. 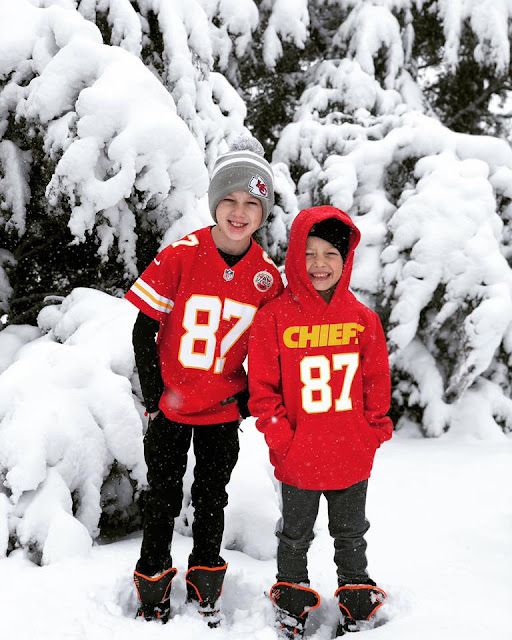 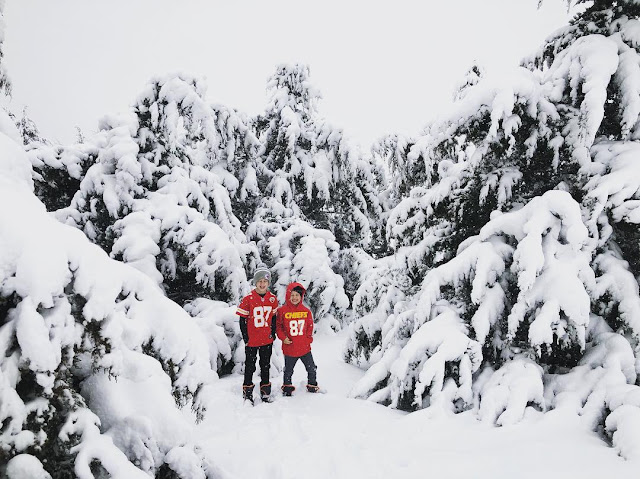 And then Cousin Colton showed up, they not only watched the game with us but Cousin Colton got to stay the night too. And as soon as they were up and around the next morning they were back outside. It was the perfect snowfall -- for all. It kept us home and with each other and we made the most out of it. & seeing their smiles and hearing their laughter was everything that weekend. 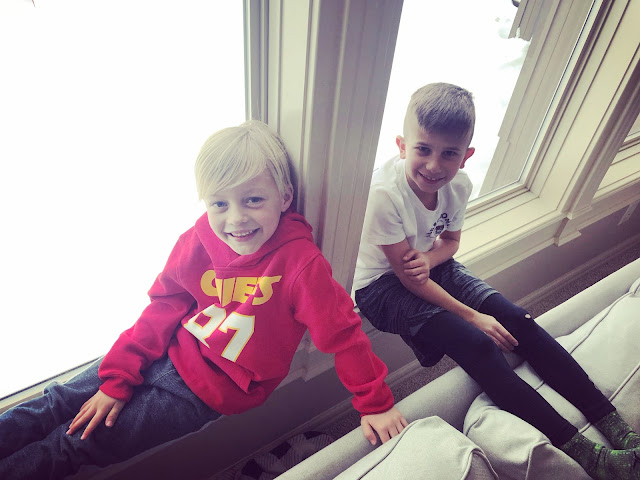 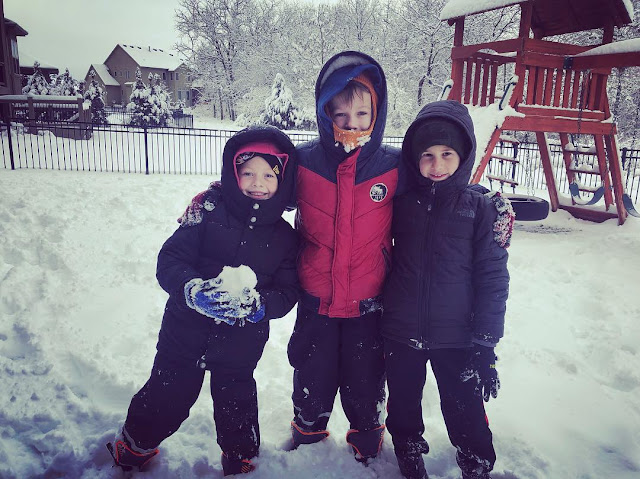 Posted by Kayla South at 2:03 PM No comments:


Two steps forward, one step back. That’s been our motto for the the last few years as we’ve navigated this ADHD journey and today we took TWO STEPS FORWARD! Not only did he gain 4 pounds (this news made me tear up) BUT we also GRADUATED from the Children’s Mercy Clinic and will be heading back to our primary care pediatrician. I’ve got mixed emotions as we’ve been so lucky to partner with the doctors at Children’s Mercy ADHD Clinic and it’s a little scary to know our time has come BUT we’ve done so much work over the last few years that it’s nice to see it’s paying off. To all my family and friends who have continued to be there for us and for having nothing but compassion and understanding for us as a family and for Kaden, thank you! Everyone needs a village like you. This journey is far from over but today was a win and we will celebrate it!! 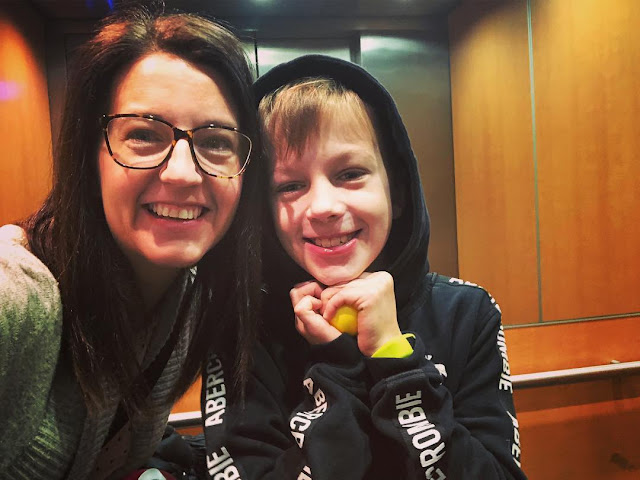 To those who may be on a similar journey—know your enough. Know that the journey is long and hard but days like today are ahead and make it all worth it!