The boys were on out of school on "fall break" and I needed to work so my mommy came to the rescue. She always does. I literally have the best mom and in turn, the boys have the best grandma. The initial plan was for us to meet halfway in Butler and make a switcheroo with the boys & then Justin mentioned something about the Wizard of Oz in a conversation he was having. Wait what? When? He stopped what he was doing and pulled it up, the Kansas City Ballet was presenting The Wizard of Oz & it was playing through the week. The Wizard of Oz happens to be my mom's all time favorite movie so I texted her and asked if she wanted to drive all the way up and stay with us on Wednesday. We would do dinner and take in the ballet and then she and the boys could drive back home to Carthage on Thursday morning. She was in. I was stoked.

This would be both of our's first time at the Kaufmann Center of Performing Arts & I couldn't think of a better performance to take in with a better person. 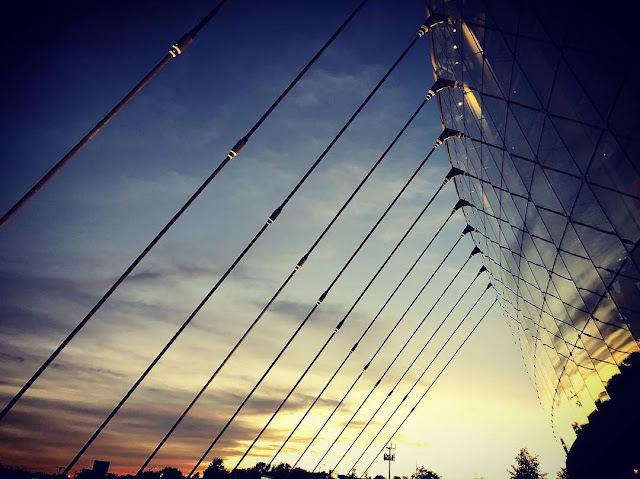 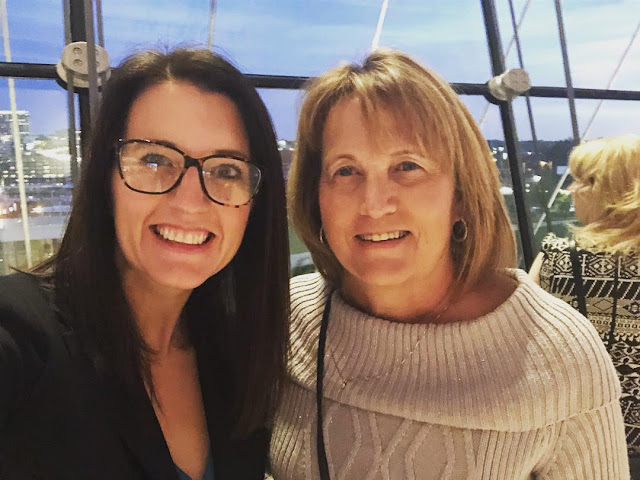 The show was AMAZING. It was not only our first time at the Kauffman Center of Performing Arts but also our first ballet. The Wizard of Oz made for a great first ballet experience because everyone knows the story line, there was no need for dialog. The dancing said it all. It was beautiful.

Thursday morning she and the boys headed to Carthage and then I joined them Friday later afternoon. When I walked in Logan immediately wanted to show me that they had the pumpkins cleaned out and ready to go for carving. As soon as Trenton and Madison arrived we headed out to the shed & we got to work. Kaden wanted a super scary face, Logan a cat, Madison a ghost and then we threw something together for Trenton.

Logan actually did the entire thing all on his own--well, he asked that I add the ears and the eyes. Kaden did about 50% of the work, the problem was his "kit" wasn't all that helpful. In fact, it was a pain in the ass so I drew on the smile with a marker and then went to carving. Madison, well, Grandma Sara probably did more than her but she stayed right there next to her the entire time. 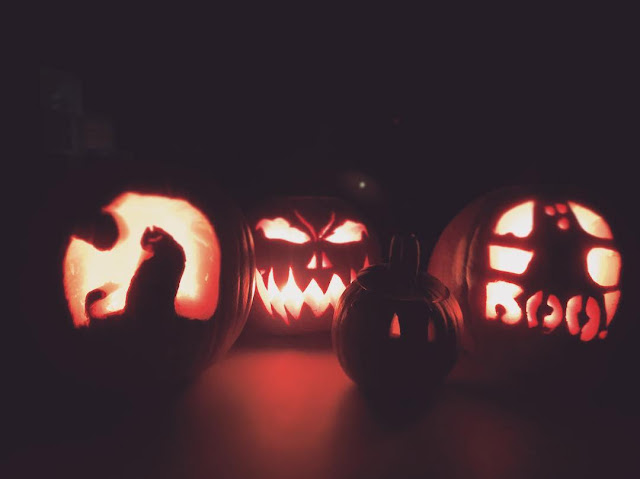 About 7:30 Logan came to me and said he was really tired. He's been having troubles going to sleep on his own. It all kind of started when a neighbor of ours had a fire, a bad fire, & since then, he just hasn't wanted to fall asleep on his own. So he climbed up on my lap and within minutes, he was out. 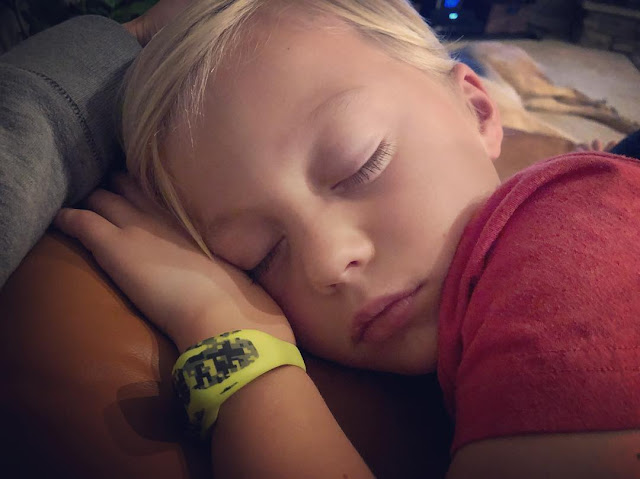 The next morning we were up and out of the house early because he had to claim a spot alongside the Maple Leaf Parade route. Thankfully, one of Madison's friends lives RIGHT on the parade route so we only had to find parking. The boys were all about the candy. & the hot chocolate that Grandma Sara made for them to bring. 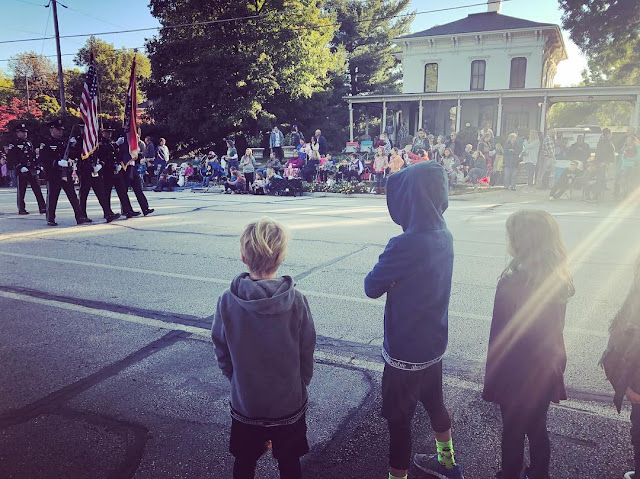 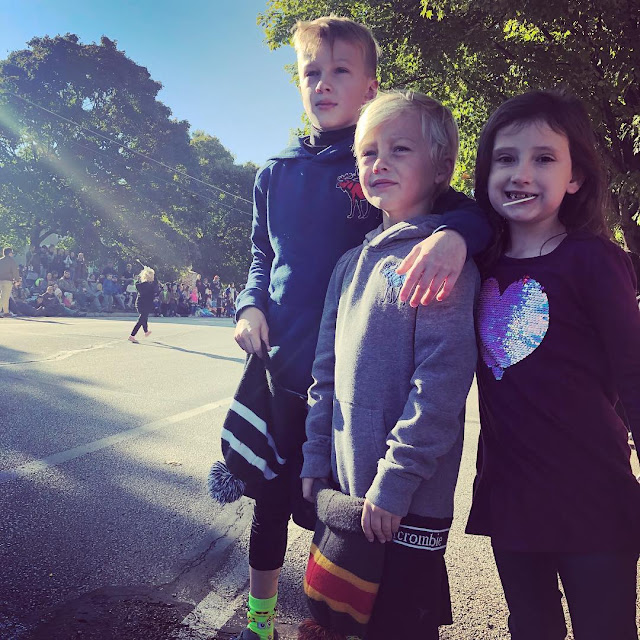 We got to say hi to the Jasper Eagles Marching Band who sounded great even though they had very few band members. I grew up in a super small town so having a small band, isn't something new--and good things do come in small packages. 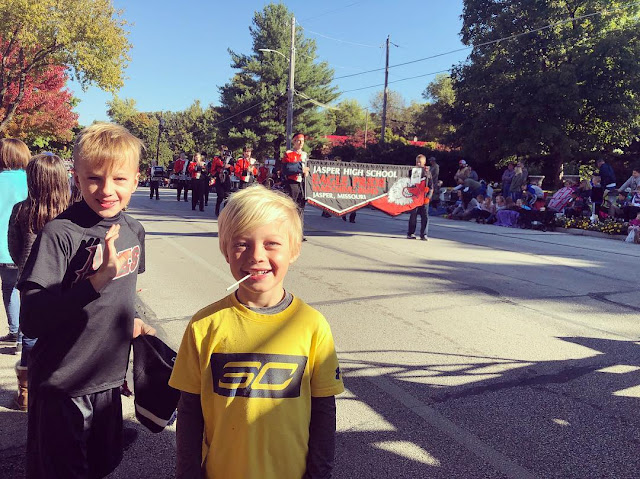 An hour and a half later the parade was still going. I thought I was going to fall asleep, I mean I love a good parade but I had no idea it would be this long. Thankfully there was a little break in action and the boys stopped long enough to take a picture with their deal old mom. Looking back, I wish I would have got my momma in the picture too--she does so much for us. 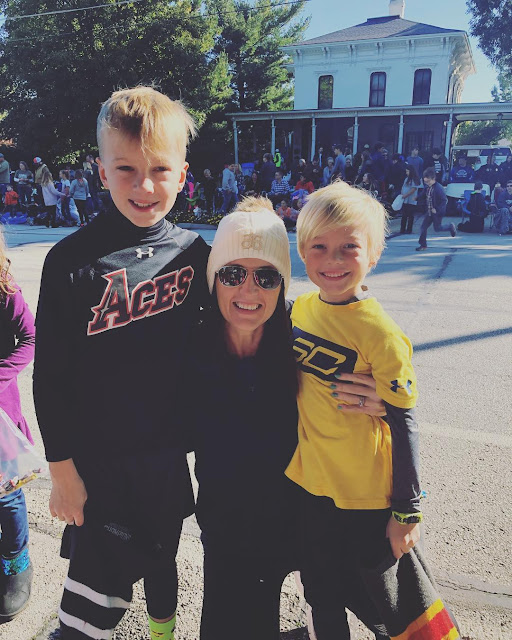 After the parade we headed to the square to grab lunch. & since we were all in great moods the kids hit the jackpot. Per Logan they had the best cinnamon rolls ever. Kaden said they had the best root beer ever. Madison said the cotton candy was the best ever too.

These kids were living their best life. 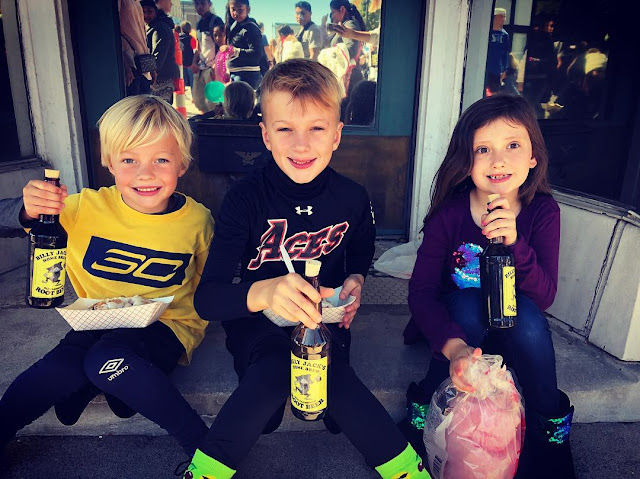