Fall at the Lake

So, we bought a boat. Well, kind of. The whole South family bought a boat. & we didn't buy it until after we had already had our final hurrah of the summer so Justin wanted to find a fall weekend to take the boys down and head out on the water for some exploring.

Now, we had a boat before but it was an older one. One that we really didn't trust a whole lot so we only took it out in our cove & maybe the cove over but we never went on any lengthy boat ride.

I was also of the mindset that maybe we didn't really need anything more because we have an awesome dock in a quiet cove. Why would we want to be on a boat all day and take it out to swim when we have the perfect area right at our house to enjoy. But Justin got it. & he got me on board. 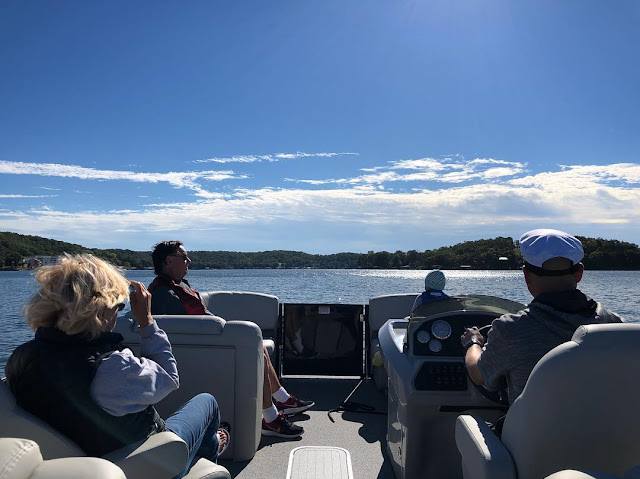 We headed down after the boys got out of school on Friday with three dogs in tow---Stoli, Gus and Schultz. Janet and Craig would be arriving late into the night as they had tickets to Billy Joel. For the most part, it was a simple ride. For the most part, the dogs did great, actually, one dog didn't move for the entire trip. Once we arrived we got to work on setting up the cabin. I made beds. The boys fed the dogs & took them on a walk. Justin got the water turned on. The one thing that we didn't have to do was unpack a weekend's worth of food. We decided that we would eat lunch out on the water and then dinner in town. We wouldn't be sticking around too long on Sunday since we had baseball practice and a Chiefs game to watch so we barely packed any food--it was amazing.

As soon as the boys woke up we got them fed and headed down to the dock to check out the boat. They were super excited as Craig and Justin started uncovering it. We bundled up and headed out for the morning. There was so much room and the radio actually worked. We had cup holders and lounge chairs. It was so nice. The boys were loving life & so was the captain. 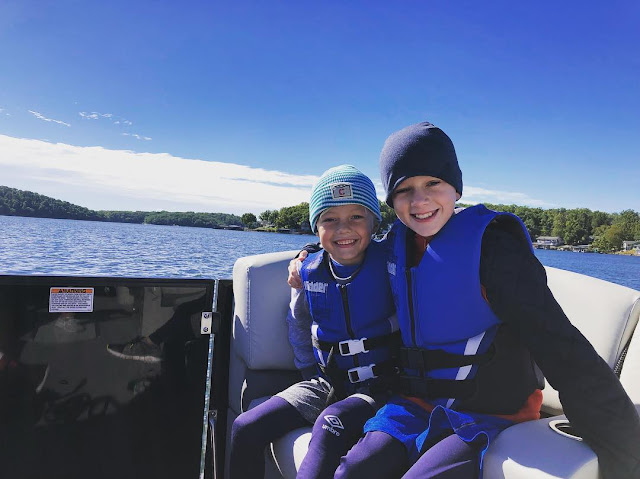 I saw more of LOTO that day than I have in the last 16 years that I have been going down there & probably spent more time in this new boat than I ever did in the old boat too. Justin navigated his way to the toll bridge & of course we had to take a picture & then it was my turn to give driving the boat a try. I never wanted to drive the old boat because technically it wasn't ours, it was Justin's aunt and uncle's boat and well, if something happened, I didn't want to be blamed. This boat is different. It's our boat & although I doubt I spend much time driving it because that's Justin's gig, I want to at least know how to do it. You know for safety reasons. 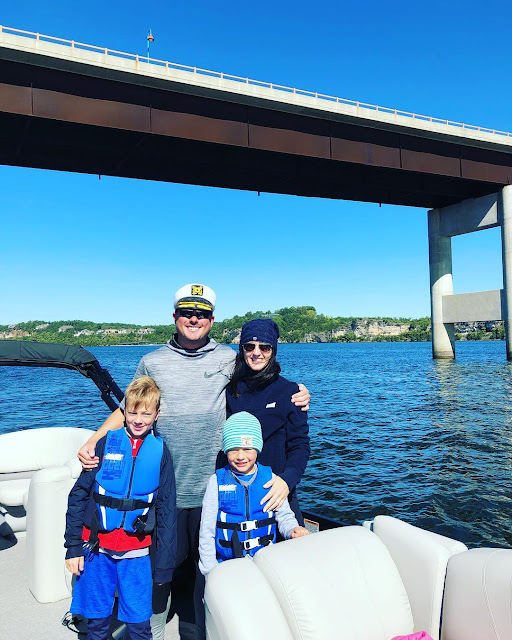 Once we reached the bridged the headed back towards are section of the lake and stopped in at Jolly Roger's for some lunch. This is where Logan met a new friend, Corona. 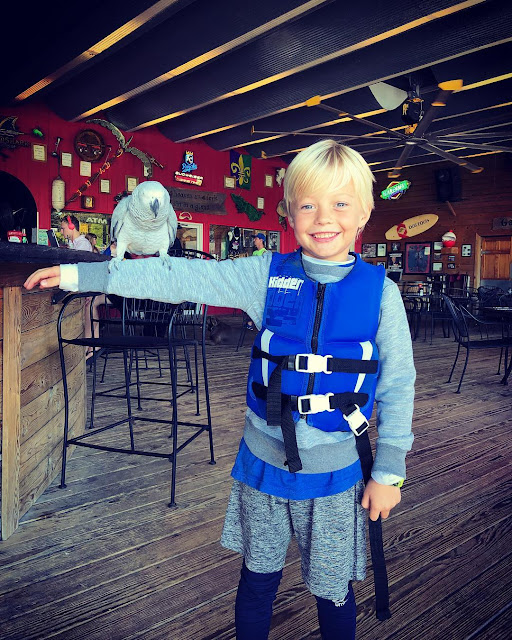 After lunch we made the short drive back to the cabin where the boys got to fish and the dogs got to run. Well, Gus ran as Stoli and Schultz slowly walked around. & for this being Gus' first time at the lake, he did amazing, sure he wouldn't lay down and go to sleep until the house was quiet and dark but outside of the first time taking him to the bathroom, he was never on a leash. He stayed right next to us the entire time. Was a little skiddish about the dock but eventually found his way out there. Helping the boys fish was what he loved the most. 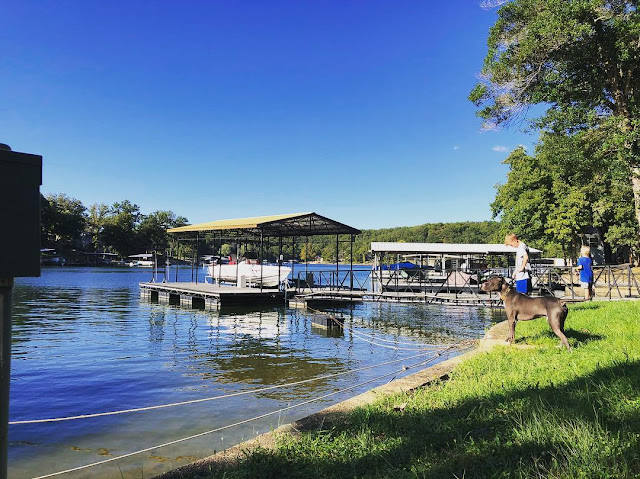 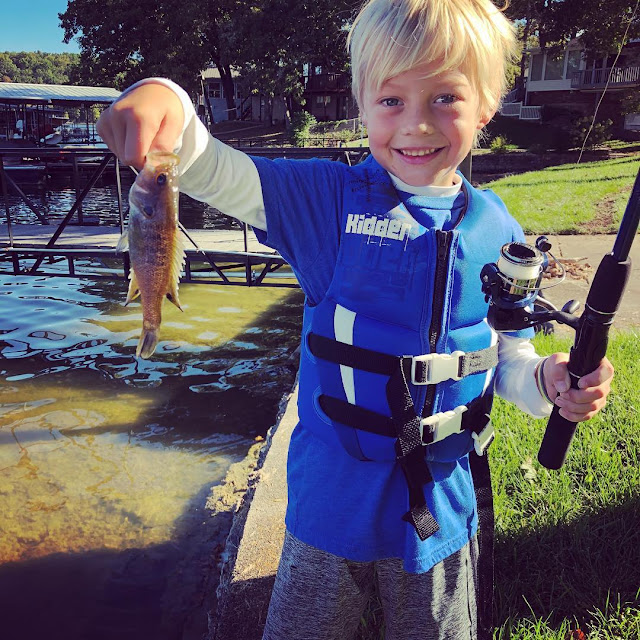 The boys fished for awhile and then they were ready to go back out on the boat. So were we. We packed up a little cooler and headed a different direction, this time ending up at the dam. & then we found a quiet little cove where the boys jumped into the water and then got their fishing poles back in the water. It was a perfect afternoon to be on the water & once we got back home it was already dinner time. We loaded up, headed into town, had dinner and then spent the evening with the Walshes who were down at Scott's house. It didn't take long before this one's head it the pillow and his eyes were shut. Summers at the lake are a favorite of ours but fall at the lake, well, it's pretty awesome too. 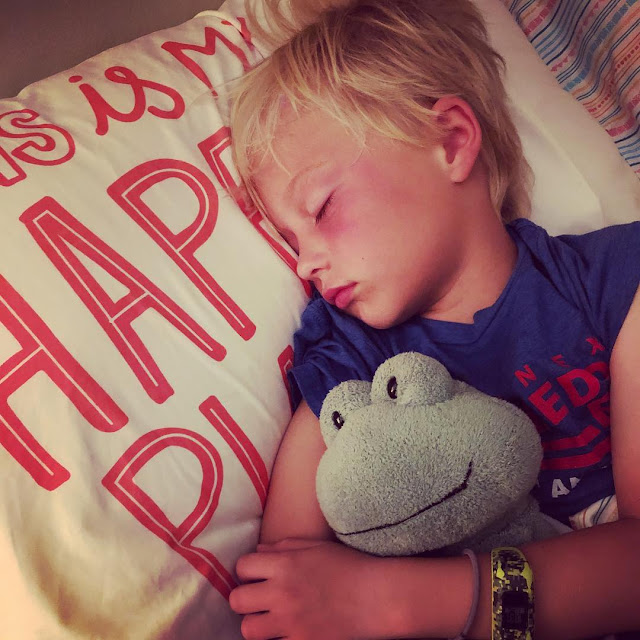 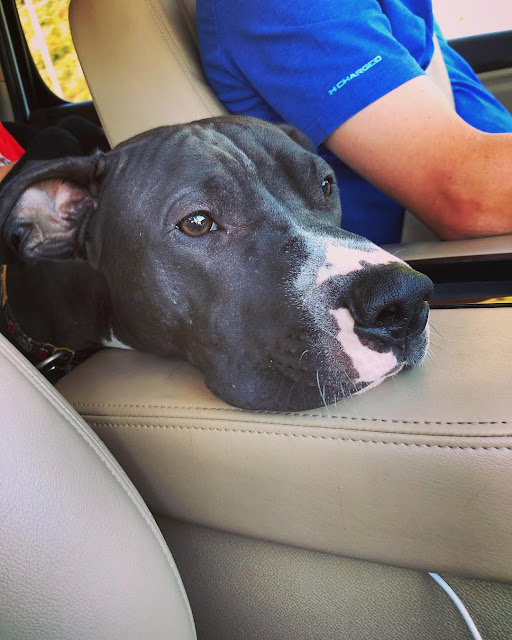