A few months back my brother called and asked what we were doing the first weekend of August. I didn't even need to ask which day because I already knew that I would be out of town on work--it happens pretty much every August for the last 6 years. I explained that I had a work event and he continued to explain how they were coming up for Chiefs Training Camp. I hated missing it. I hated the boys missing it but then LIGHT BULB! I needed someone to watch the kids and my MIL was out of the country--enter MOM! She said yes and they made plans to join Zack and Lindsey as well. My parents came up on Friday night-drove separately-and then early Saturday morning, like 6:30 a.m. they took off for St. Joe.

Justin was torn--he was excited to spend a few days with me in Vegas but he really wanted to be at the camp too. He did the only thing he could and decked the boys out in new jerseys. And just in case you were wondering, it's about a $25 jump from a kids large to a YOUTH small. Both boys picked out their numbers---Logan at first said Tyreek Hill but then changed when Justin and I both told him who #15 was. (Turns out, the kid may have known what he was talking about.) 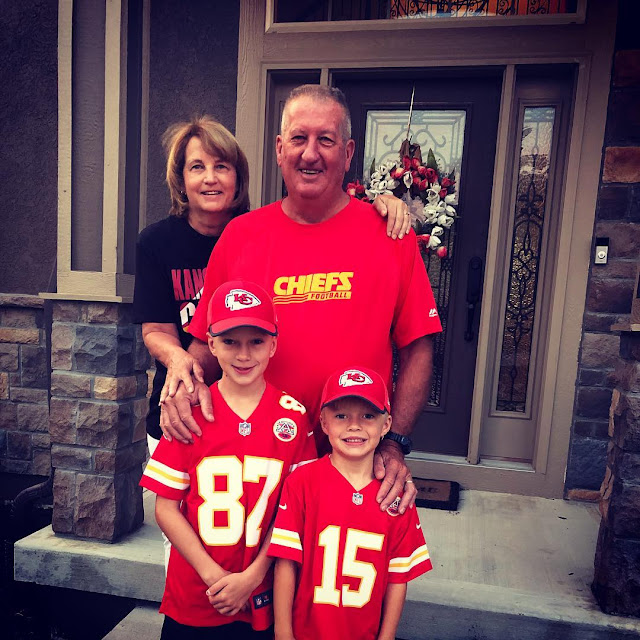 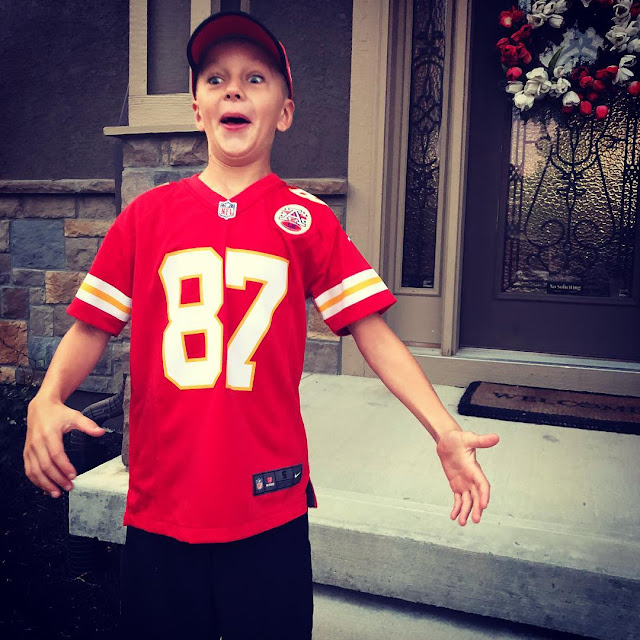 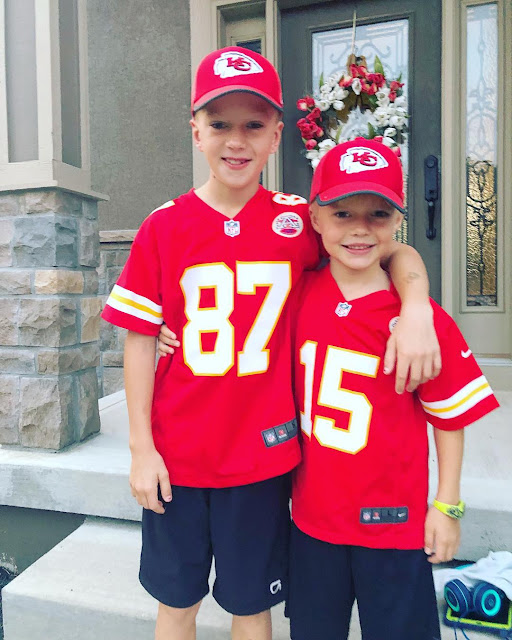 Zack and Lindsey had spent a few days at Great Wolf Lodge and on Friday night decided to stay in St. Joe so they were closer to the training camp & wouldn't have to get up so early. However, sleeping in a hotel room with two kiddos under 6 isn't the easiest so they got up and around, headed to the fields and claimed their spots for the next few hours. 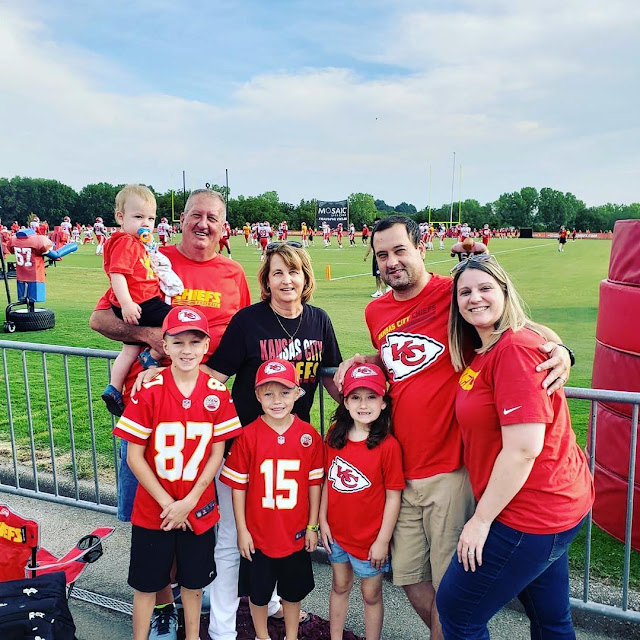 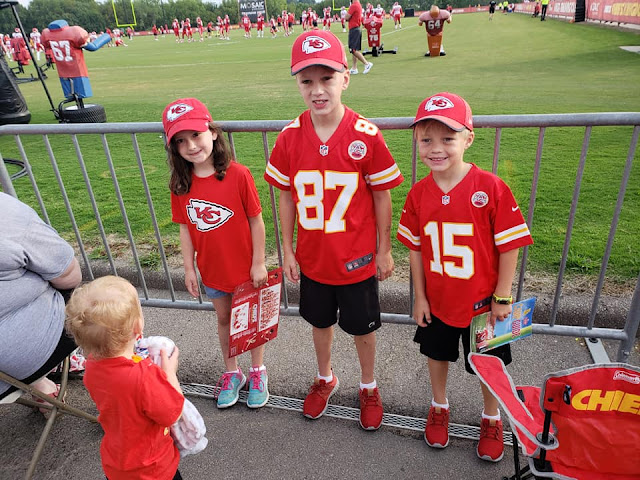 The kids were troopers but they still needed to move around a little so they found the Kids Zone & then a few cheerleaders & KC Wolf along the way. Madison was in heaven. 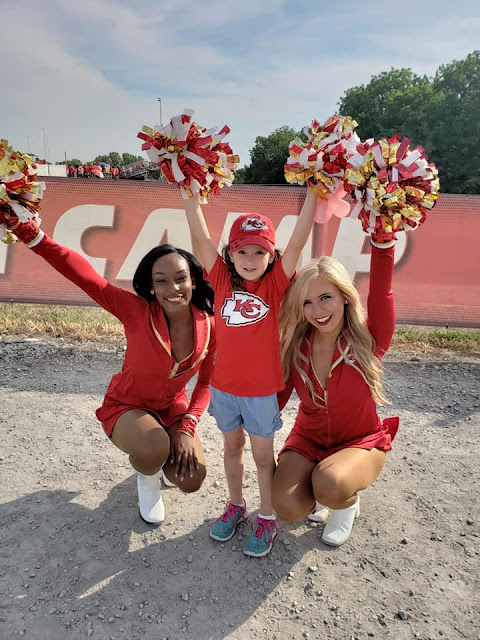 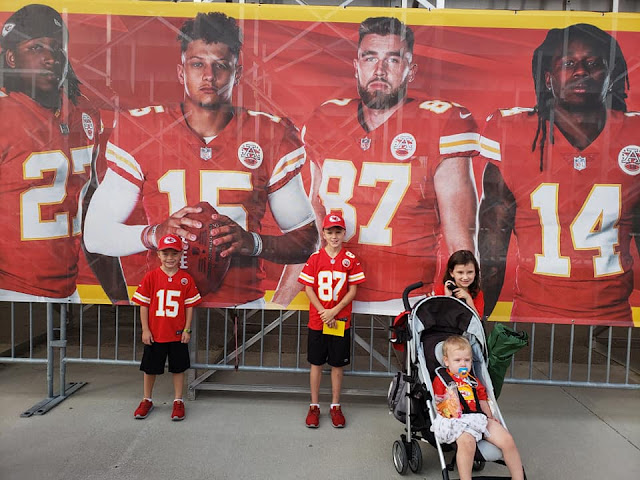 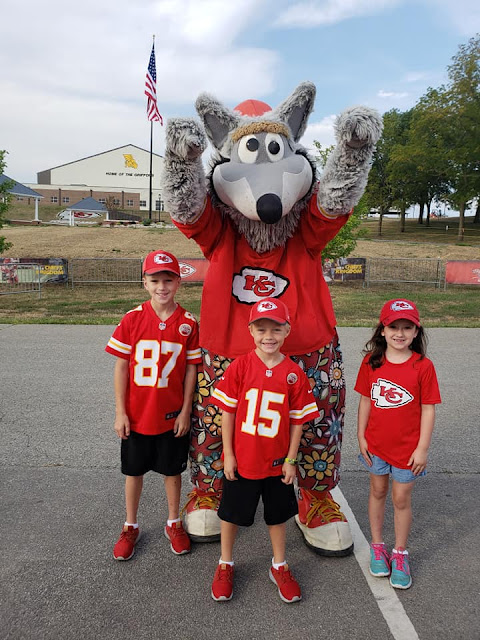 Finally, it was time. Autograph time. The boys were hoping that they would be able to get a few autographs from any of their players. Top of their lists (everyone else's lists too) Travis Kelce, Patrick Mahomes, Tyreek Hill. Well, one out of three, isn't too shabby.

Tyreek Hill came over to Kaden, signed his hat and then asked to borrow his pen for a little while. Mom said Kaden's eyes got real big like, what if I need it, but Tyreek assured Kaden multiple times that he would bring his pen back. So Kaden agreed. He watched closely as Tyreek went down the line signing autographs, worried he'd forget BUT he didn't. He came back to Kaden, thanked Kaden for letting him use his pen and posed for a picture too.

Maybe Logan was right, a #10 jersey signed would have been pretty sweet. 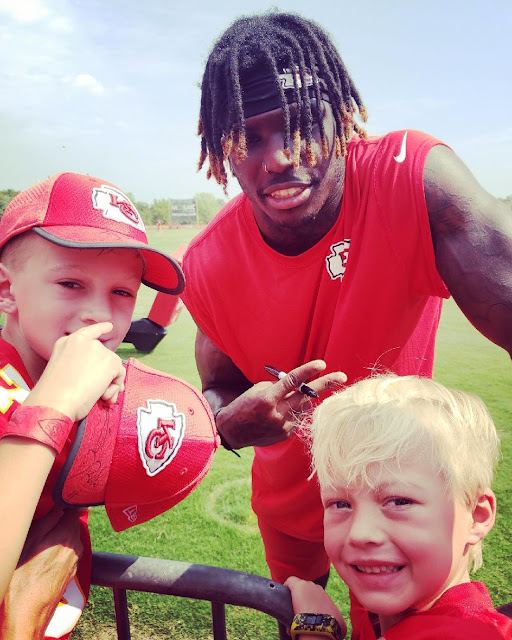 They also managed to snag Demarcus Robinson's autograph too & get McDonald's on the way home. These two were starting their weekend off right--spoiled to the core.
Posted by Kayla South at 9:17 PM