Strong Finish for the Aces

The Aces' baseball season was winding down and the only thing left was the end of the season tournament. This particular season, it didn't go as well as we would have hoped. Due to certain circumstances in Spring of 2017 we were placed in a pretty hard division, probably a step up from where we should have been. We finished the season with a losing record, we went 1-9 in division play. However, we managed to win a few games the tournament we played midway through the season and took home 2nd place. I don't hate that we lost more games than we won because with the losses came some very valuable lessons. The boys learned how to never give up. They learned how to pick one another up and lean on one another. They learned how to shake off plays and that the next batter was a new opportunity. They learned how to lose graciously & when the wins came around, they learned how to win graciously. Did the hurting sting? Absolutely, more games than others, but we continued to see them working hard and improving and saw it to. More importantly, they knew there was more to this team than just baseball. It's a family now.

Going into the tournament there weren't a lot of high hopes but the boys were still excited to play. They always are. They can almost always be found coming off the field with smiles on their faces, they just love the game and each other. The blind draw was made and we drew the one team that we had beat during regular season -- game time, Saturday night at 7. I wasn't super stoked that it was that late at night, yes, the weather was better BUT we couldn't spend anytime at the pool that day--boys need to rest. They came with their A game that night and walked away with a win.

Next up, the Spartans, 6:30 on Sunday evening. A team which had beat us pretty handily so we knew we needed another GREAT game We had a few family members in the cheering section for this one--Cousin Colton, Aunt Becky, Uncle Adam and then of course, Grammy and Craigster. We arrived at 6 for warm-ups but soon learned the game ahead of us not only started late but they were going into extra innings---we ended up starting our game about 50 minutes late. We were just keeping our fingers crossed that we had enough daylight to get it in... 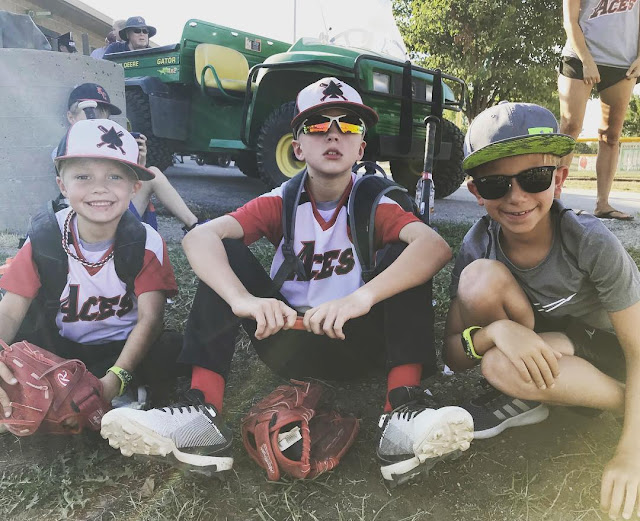 Cousin Colton must have been our good luck charm as the Aces came out on top! We were the visiting team so that meant we had to come out swinging and then hold them on defense. The boys (and their coaches) did just that. It was a back and forth game the entire time, 4-4 after the first inning. 10-11 them after two. 15-15 after 3, 17-17 after 4 and as daylight started to fade we entered extra innings. They were giving us one inning to decide a winner or else we would need to move to a field with lights. Kaden had made the last out the inning before so they put him on second to start the inning and we also started with one out--it's their way of speeding up the game while also hopefully breaking the tie. We scored 4, heading into the bottom of the inning 21-17 and that's where the game ended too! The boys got the first two batters out and the game was over--onto the championship game the Aces marched. 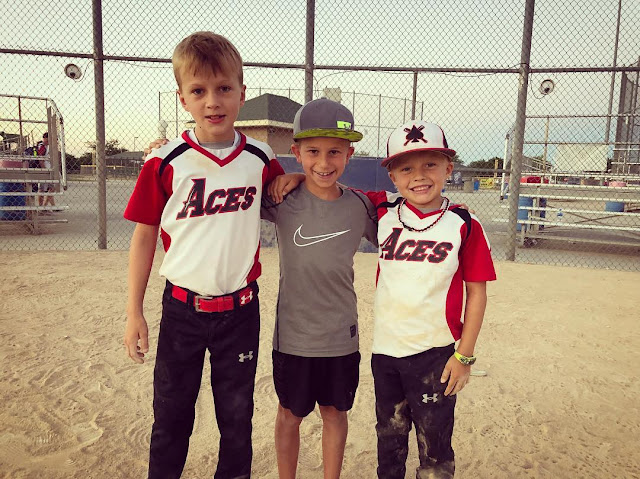 Fast forward to Tuesday night, the championship game. We had a 7:30 start time and this time we were on fields with lights so no worries about daylight fading.

As soon as the boys stepped out of the car, up walked a surprise--Grandma Sara had drove up to watch them play. They were so excited to see her. She wasn't the only one to come out and watch, one of Kaden's and Luke's friends stopped by and then Logan and Little C's friend, Jackson, came to watch too. I love how sweet their little friends are, not to mention their parents too. 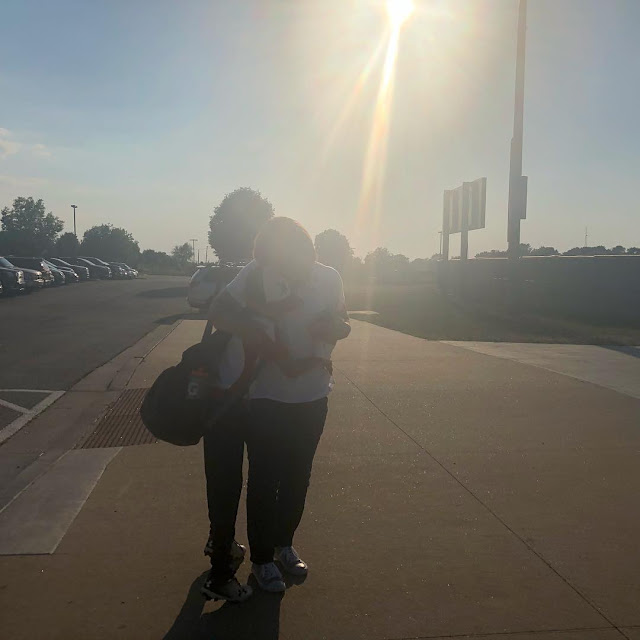 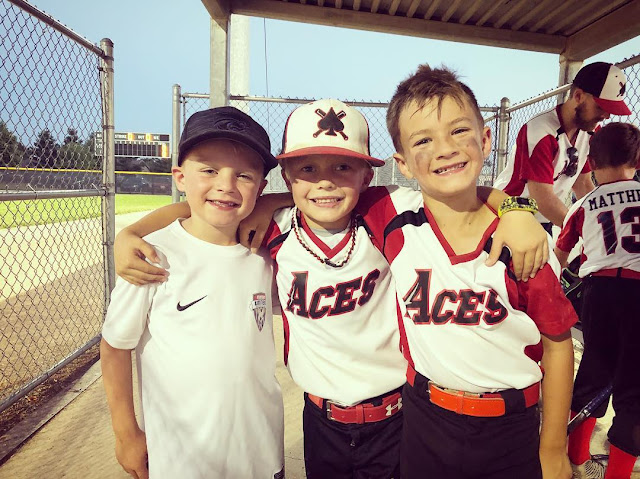 The game started off tight, 2-1 Cure of Ars Cougars but sadly in the 2nd inning we let it get away from us (we typically have at least one inning where things just don't go our way) and after 2 innings of play the score was 9-2. We mounted a come back in the third inning and closed the gap to 9-6 but after 5 innings they still had the edge 15-11. We went ahead and started a 6th inning because time allowed but we didn't get to bat since they scored 4 runs making it out of our reach to catch up. (You can only score 7 runs per inning). The boys were upset. They wanted that trophy and I don't blame them, they had come so far this season but 2nd place was nothing to hang their heads about. 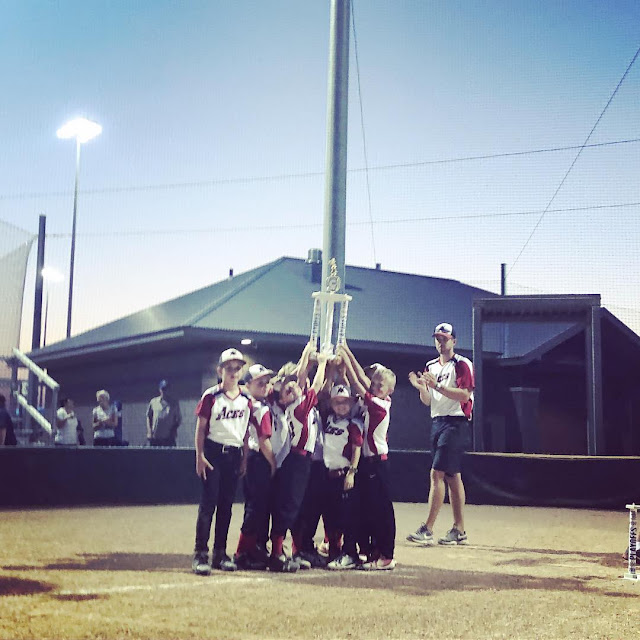 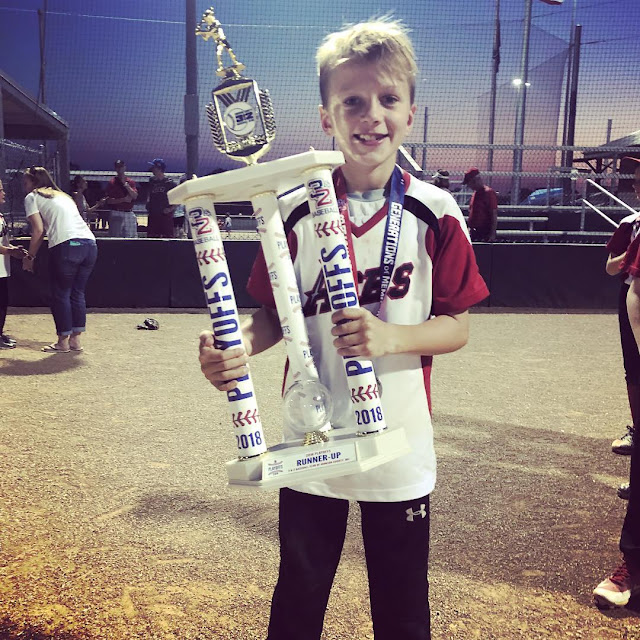 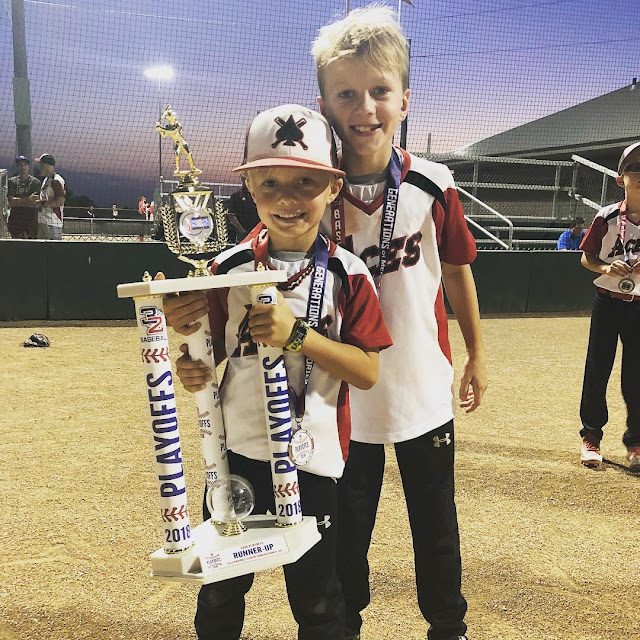 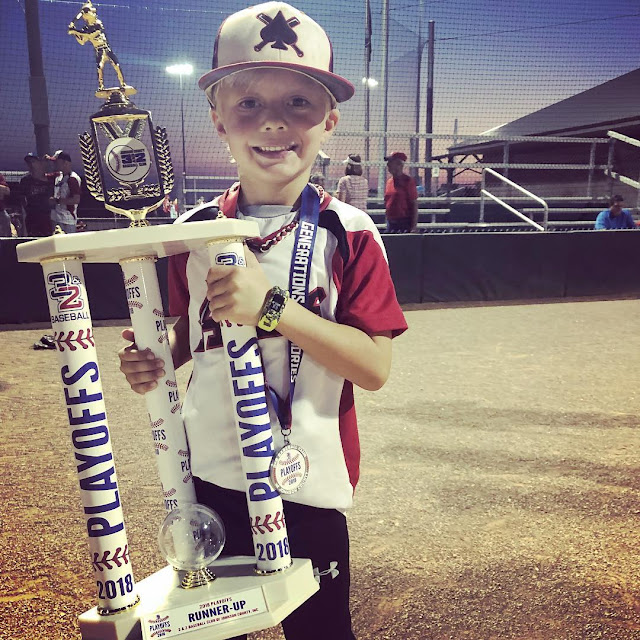 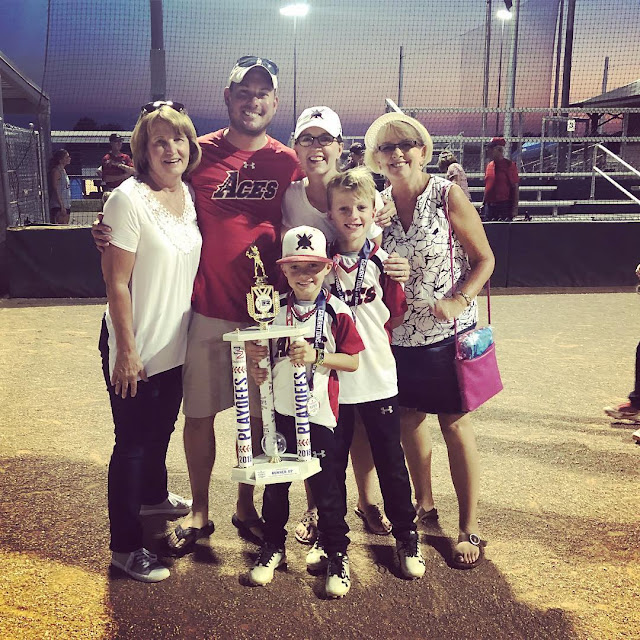 We couldn't be more proud of Kaden, Logan and the whole team. They showed up every game to play. They worked hard at each practice to get better and you could see the friendships continue to grow between them all. This team isn't like most other teams--we have three boys (Logan being one) who are a full year younger than everyone else, who we gave the challenge of playing up this past year to. We have two, soon to be three boys going into third grade at CCE, we have two boys from CWC and then 3 kiddos who attend separate schools or are home-schooled. This is a team that was pulled together over the course of a few years who in the end have become more like brothers than anything else. They support each other, they challenge each other, they argue and annoy one another but they're each other's best friends. And it's not just these boys that make this team a family---the coaches are next to none. They are teaching our boys valuable lessons on and off the field. They hold them accountable, challenge them, help them overcome obstacles and most importantly, they celebrate them. The parents, siblings, grandparents are all so wonderfully amazing & just good people to be around. There are a lot of days in a baseball season, especially when you play spring and fall, I couldn't imagine spending it with another team. Like I said, it's more than just baseball. 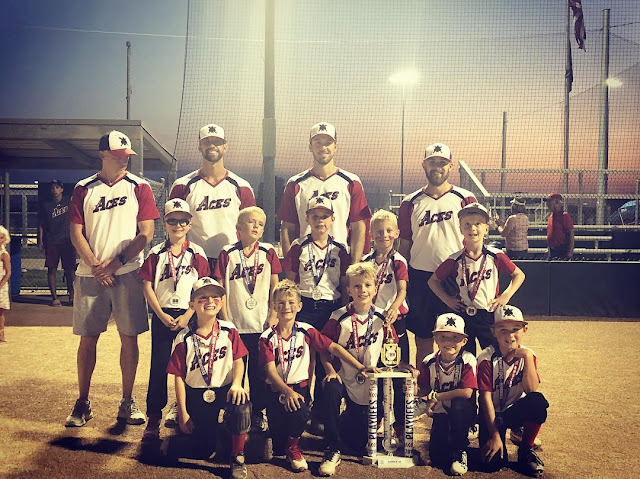