Tournament Time for the Aces

It was baseball tournament time- The Legends Tournament. This was the 2nd for the boys--the first was in freezing weather and now this one was basically in record highs. That wasn't slowing the boys down though. For the Aces the tournament started off on Friday night and pool play continued Saturday morning. Bracket play would be on Sunday after pool play had wrapped up.

We went into the tournament with no real expectations. There were 15 teams in our division. The boys took the field both Friday and Saturday and although we didn't have the results we would have liked to have seen, there was no denying that these boys weren't figuring it out. They played some really good defense but their bats just weren't working. Honestly, it's where we as a team have been struggling. So we went 0-2 in pool play and got seeded #13 for Sunday bracket play. 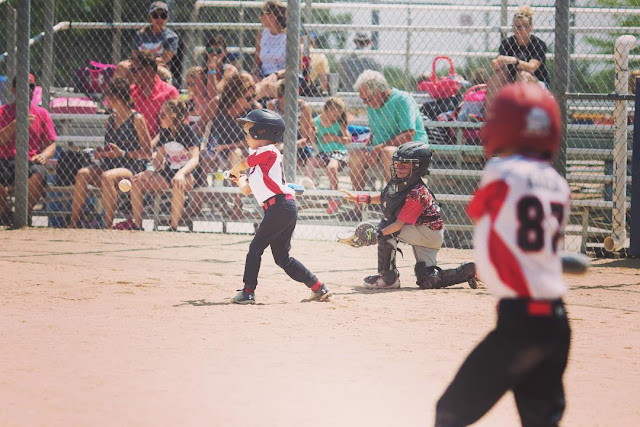 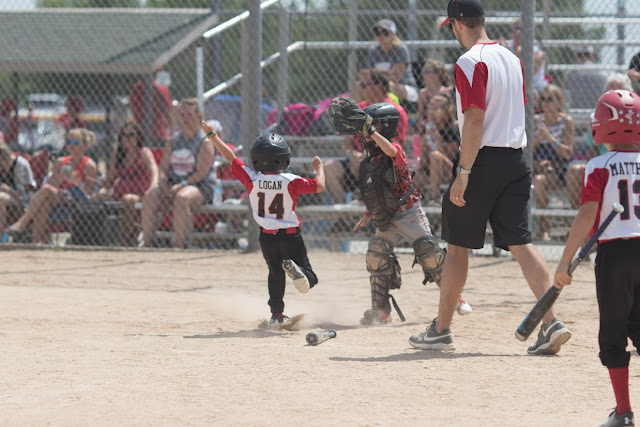 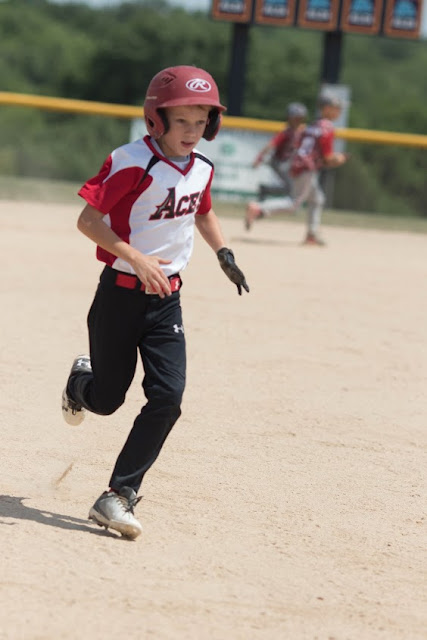 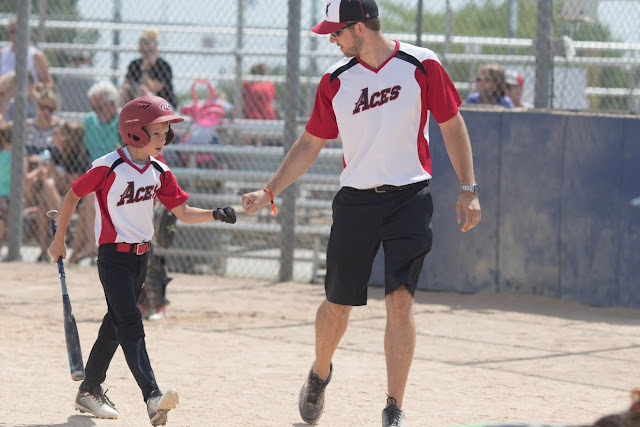 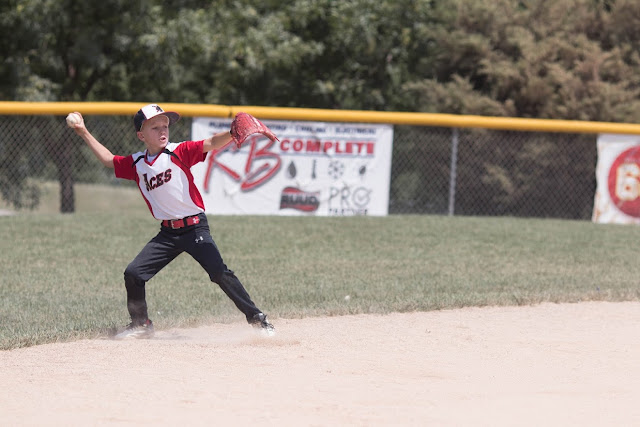 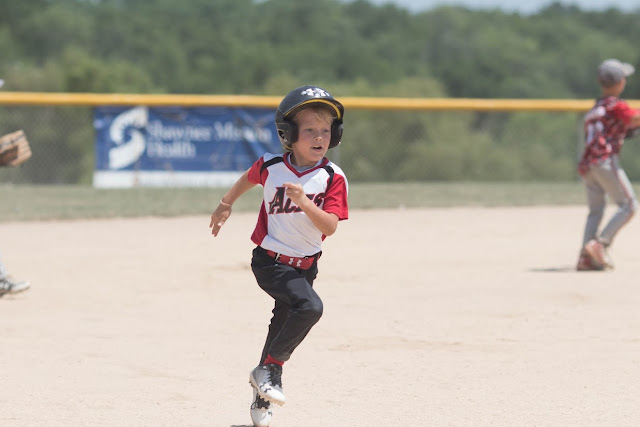 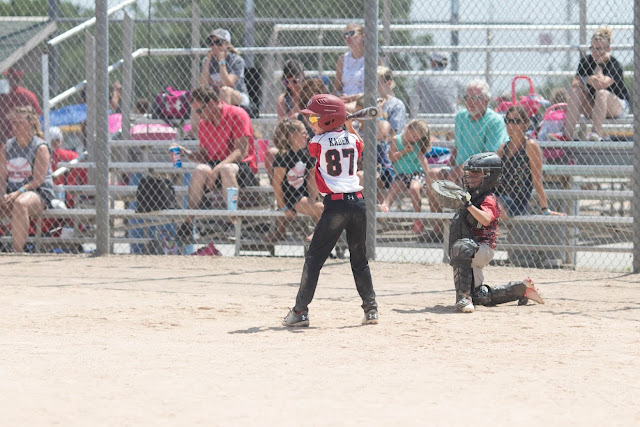 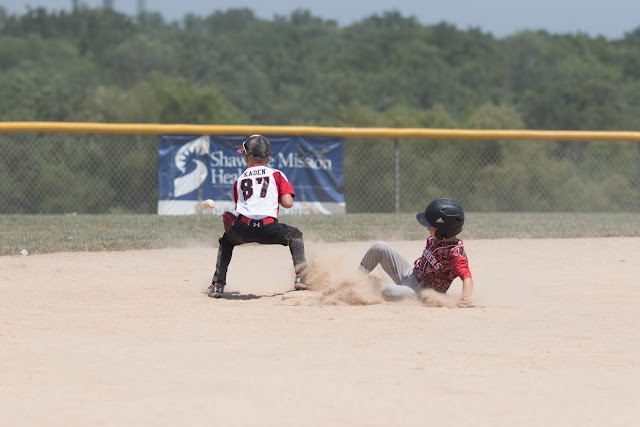 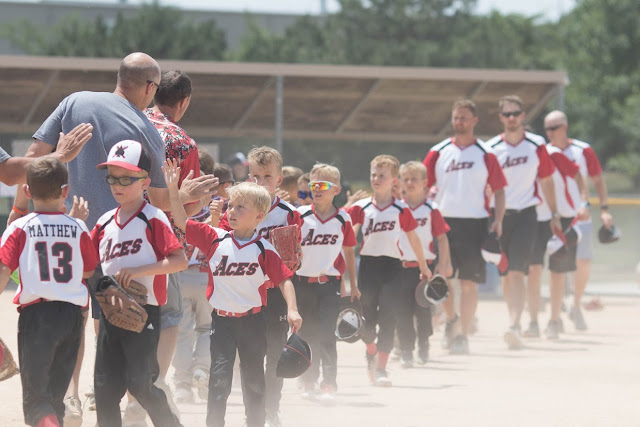 Our first game was scheduled for 11:30 that Sunday morning and we would be taking on the #12 seeded team. Winning team advances. Losing team goes home. We knew we could play better than the day before, we just needed both sides of the ball to come together.

Kaden started off in the pitching position & Logan was in right field. But we didn't take the field first, no we would be the visiting team from here on out so we were up to bat first. More specifically, Logan was up to bat first - and he rocked that lead off position. He didn't let the fact that he was at least, if not more, than a year younger than most all of these kids get in his head. He stepped up to that plate and the kid did what he needed to do. He didn't bat 1000 but he went 3 for 4 that first game, with his brother right on his heels.

Aces ended up taking that first game 9-5 and the advanced to the semi-final match up. 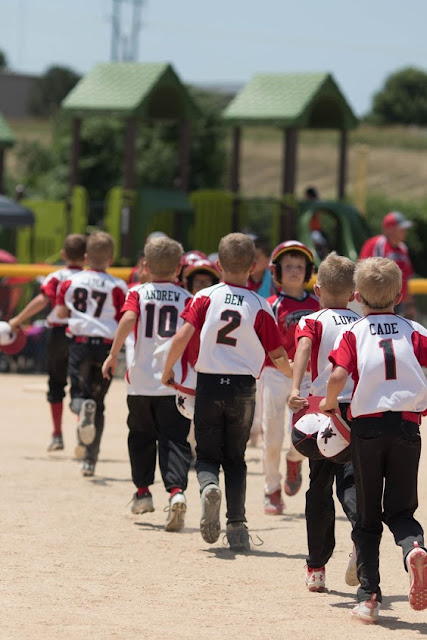 We were playing the Bulldogs. & the boys were positioned just as they were the first game of that day. Same line-up, same positions. We were keeping our fingers crossed that we would start the game just like we had finished the last one, on fire. And they did. Logan going 2 for 4 and Kaden going 3 for 4. Logan having some amazing throw-ins from the outfield to hold runners from advancing. Kaden knocking down and throwing out a handful of batters at first with Cade's assist. 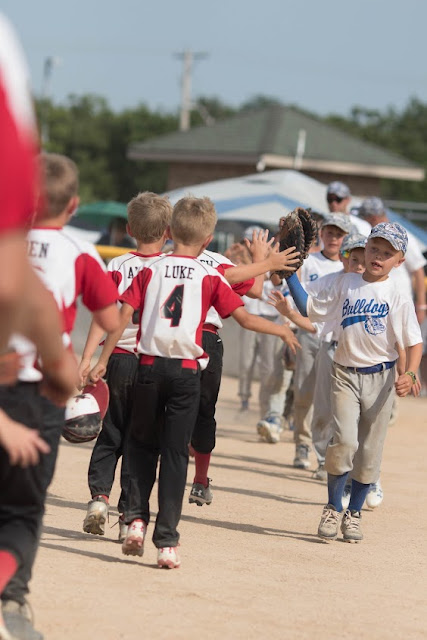 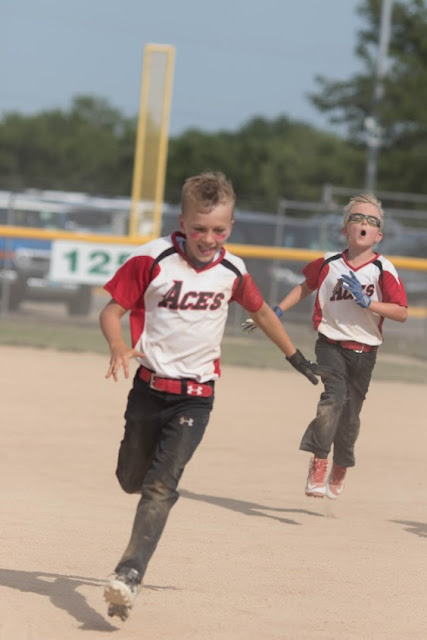 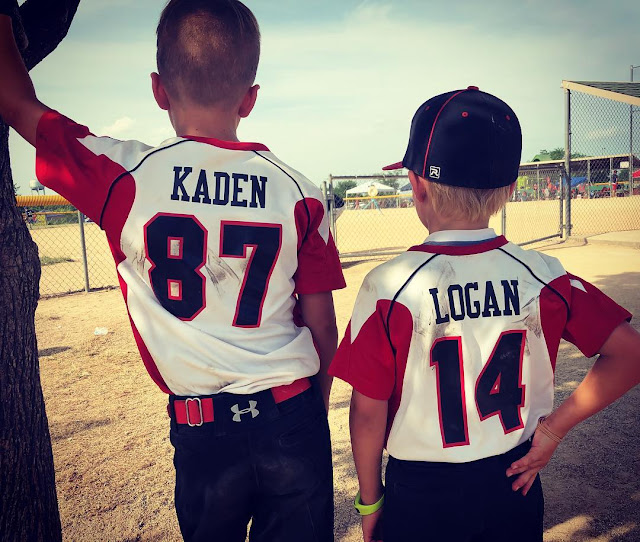 Honestly, we weren't expecting to be playing in the championship, we kind of thought that we were going to be one and done. Not because the boys are giving it their all and aren't a good little team but because our competition up until this point has been tough--we've gotten zero breaks when it comes to our schedule and who we play. But that's how it goes and we are all still learning and growing.

The championship game was going to be one of those moments of growth. We were playing a team that we had already played in the regular season who rocked us. It wasn't pretty. So we kind of knew the outcome would not go in our favor but that didn't stop the boys from going out and giving it their all. There were frustrations and disappointments from some of our boys, Kaden included. He struggles with success vs. failure and not being able to see that it doesn't have to be just one or the other that there is space in the middle between the two. So he got down on himself and pulling him out of that rut is hard. And when the game was over, he and a few of his other teammates were not happy about the scoreboard -- one kid two out of the park home runs generating 7 run there alone. In the end, the Aces fell to the Silverbacks BUT they still took home 2nd place.
Once the boys realized that they got 2nd in the tournament which meant a nice wooden bat for the team and individual medals they were all smiles again. 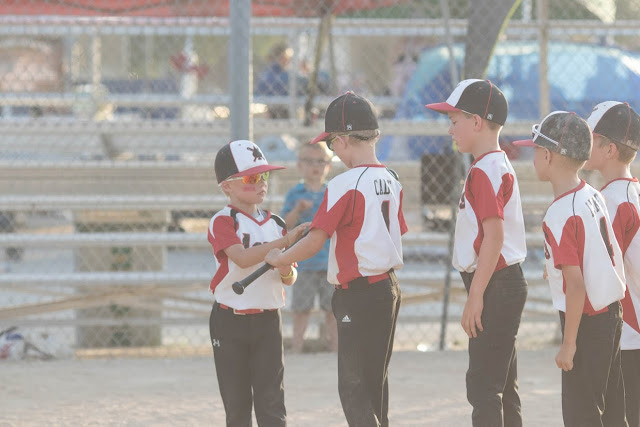 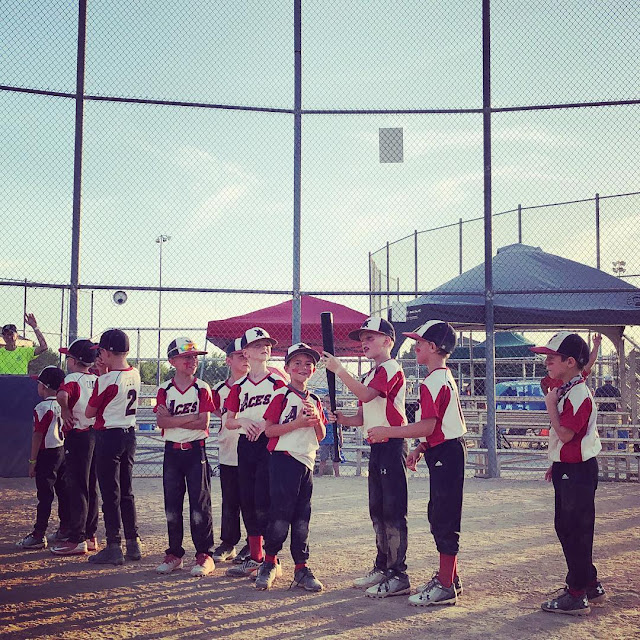 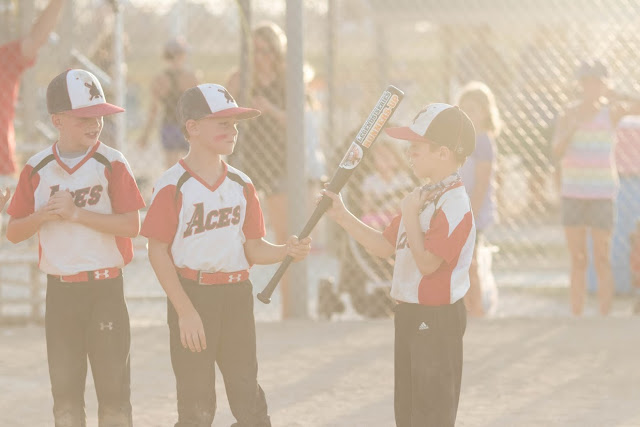 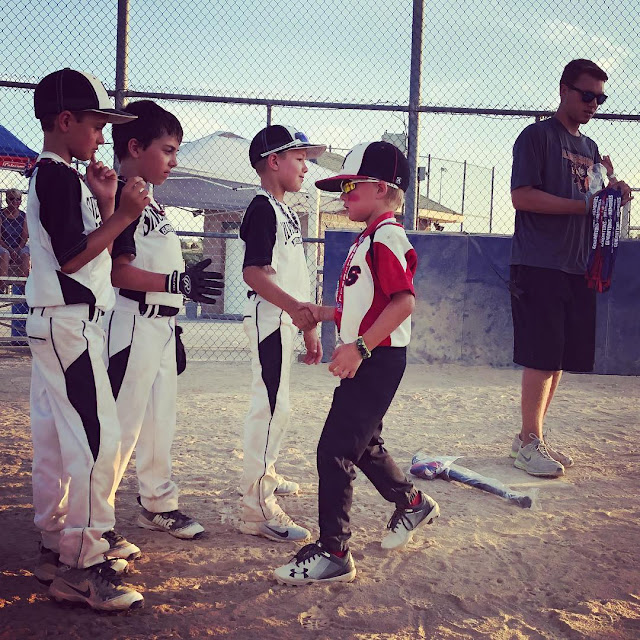 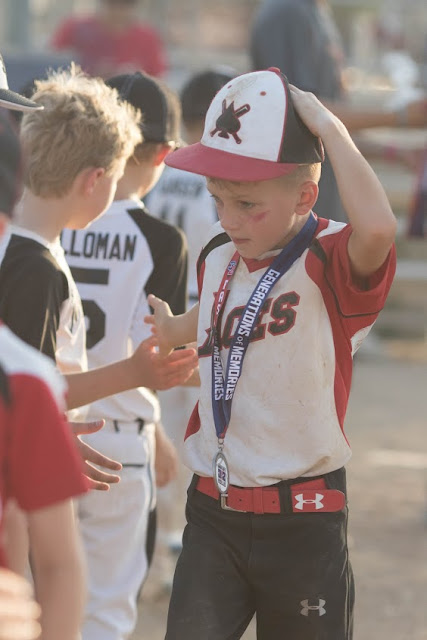 It may have been hotter than we would have liked but the day was just as long as we had hoped it would be. Such a fun weekend watching these boys grow in so many ways -- their faces show their pride but they don't even begin to show how proud their parents are of them. 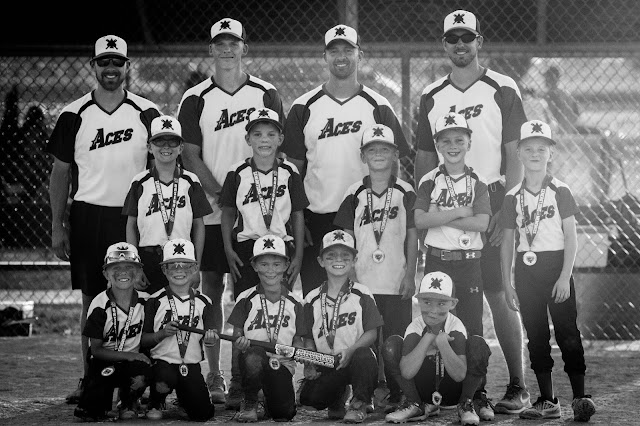 This team has created a little family over the last two seasons and it's one that we are very fortunate to be a part of. Such great kids, coaches, and families who not only want to teach the boys' baseball skills but also life skills and how to have fun doing it. 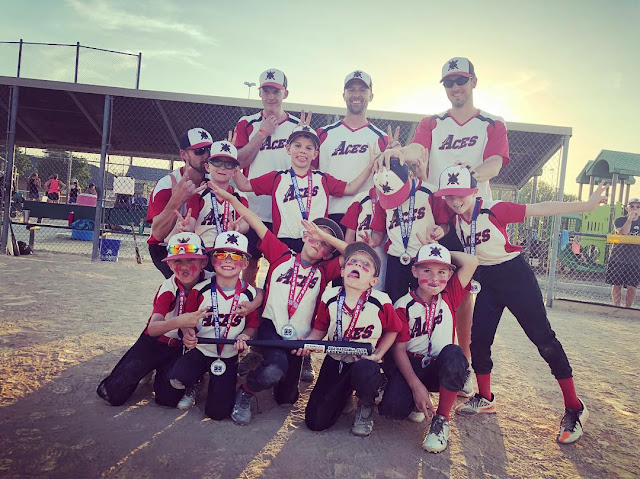