Every other year I attend a conference for one of the firms that I work with and every other year it takes me on the road for 5-6 days straight. It's actually two conferences which run back to back but either way, I'm away from the family for longer than I would like. So, like last time, this time I had the boys fly to meet me at the conference as I was closing it down and then we'd all stay a few days extra to enjoy a little family down time.

Work/life balance is so very important to me. I love working. I believe that for me, it makes me a better mom BUT I still hate being away from my family. I can do it. They can do it. It's probably good for us all BUT when the two can meet--it's a beautiful thing.

Added bonus this time around was that the destination was a place that neither the boys are myself have been--and when I say the boys I am also referring to Justin. We were headed to Tucson, only to be followed up by a few days in Phoenix once the conference wrapped up. 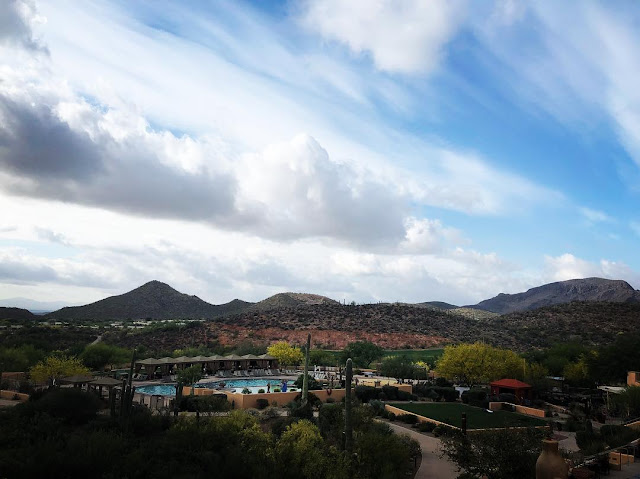 The first few days while I was there the weather was a little chillier than normal, or what I expected so I made sure to phone home and tell the boys to pack a jacket or sweatshirt that we would be needing them. I actually even wore my jacket on one of my morning walks--where I also happened to run into a few new friends who were just as interested in what I was doing as I was them. 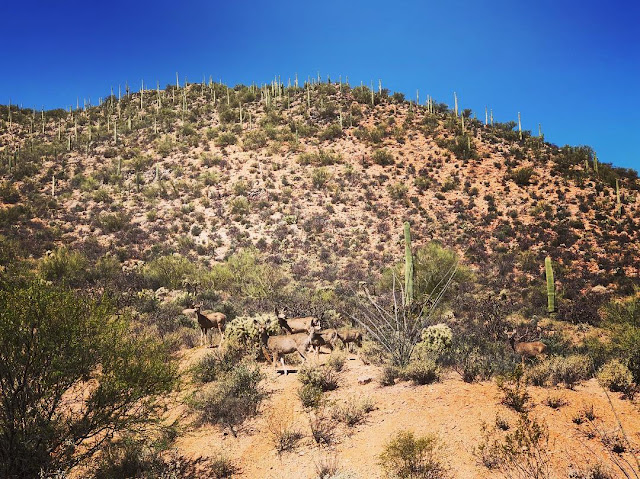 A few days after I had arrive the boys started their adventure. They had a full day of school before jumping on a 7:30 flight non-stop flight to Phoenix, renting a car and driving about an hour and forty-five minutes south to Tucson. Now why wouldn't they just fly into Tucson--well, it wasn't direct and by the time they would have arrived in Tucson, they would have landed in Phoenix and arrived at the hotel & been asleep for 3 hours so Justin made the call to drive it. They arrived around 11:30 that evening, 1:30 KC time and let me tell you, although tired, both boys were still awake. I was shocked. They did, however, have zero issues falling asleep.

Since there were two conference occurring back to back, Thursday was a free day---arrivals were happening all day long. So we all hung by the pool and then headed into town to eat at Culinary Dropout which happens to be owned by the same individuals which own North in Leawood. 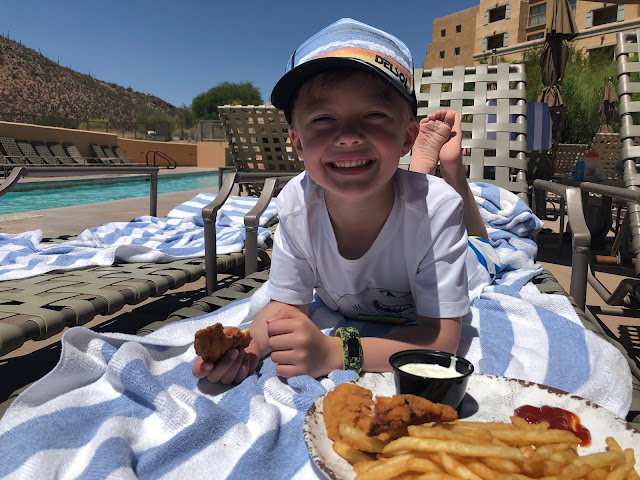 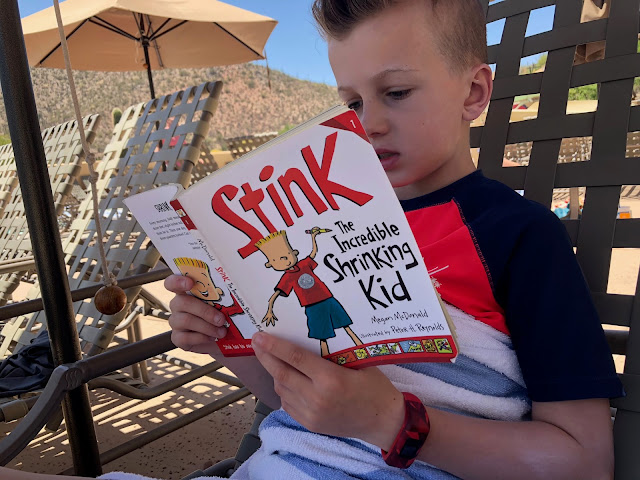 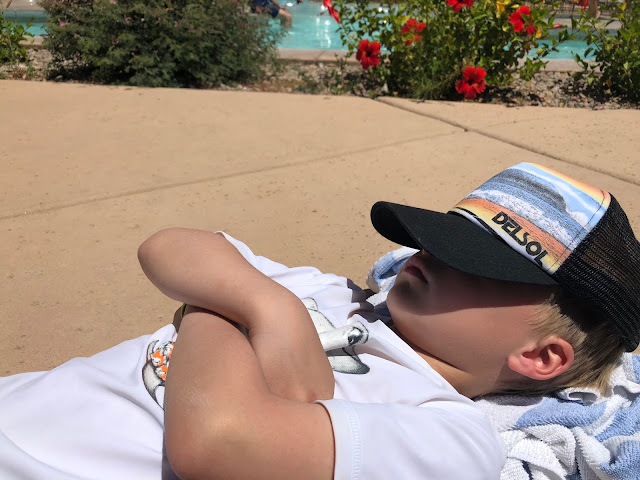 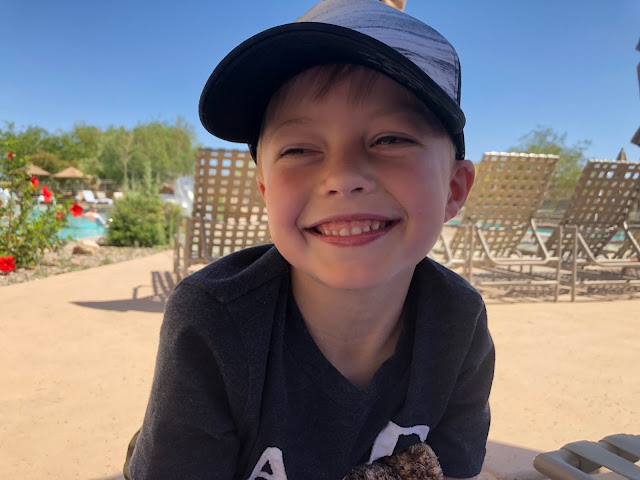 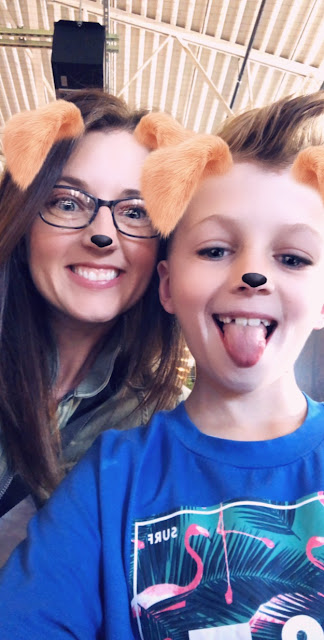 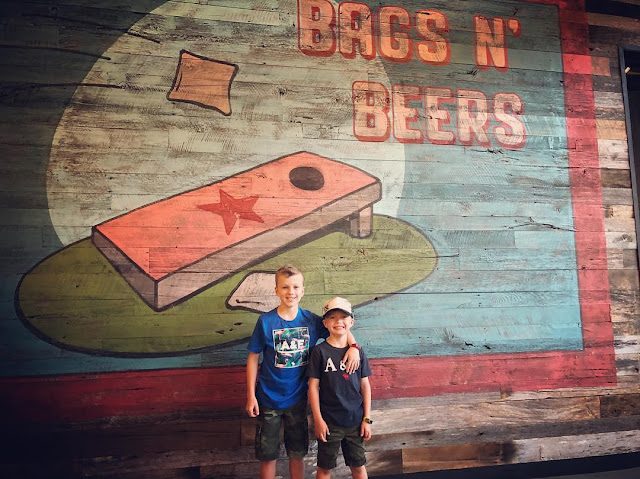 While I worked the following two days the boys hung out with their father poolside. They had taken a football and would not only toss it back and forth but they also found some green space and ran a few plays that involved Kaden leading the way blocking for Logan as he scored on Justin. Our last evening we spent around the fire pit with Smores--one of Logan's favorites. 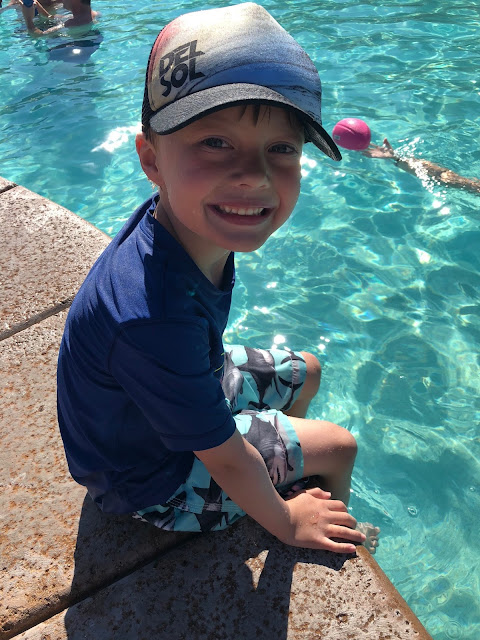 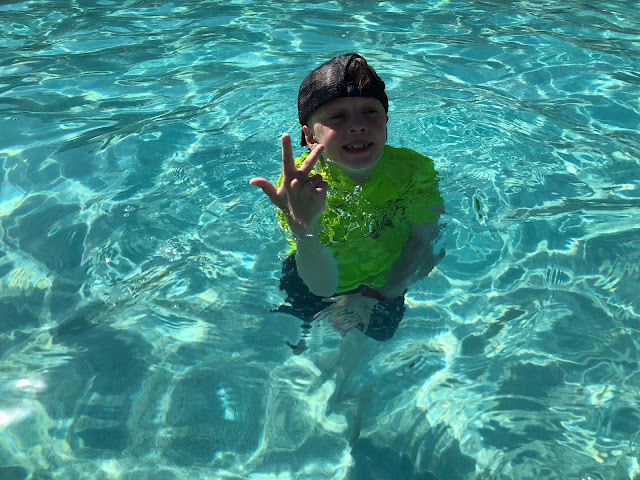 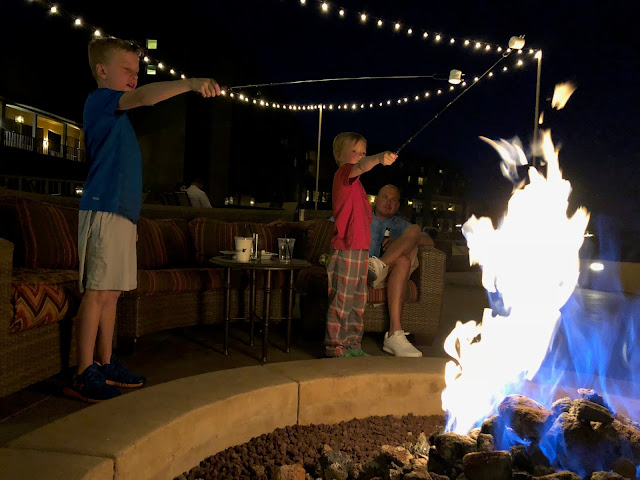 After the conference finished up we packed up our things into our rental car and headed north about 2 hours to the JW Desert Ridge Resort. The first evening we took in a Diamondback's game and then the next day, Logan's birthday, we celebrated, hiked and relaxed by the pool. This pretty awesome day started out with us leaving the resort around 7:30 so we could get our hike in nice and early before it go too hot for us. The staff at the hotel suggested Pinnacle Peak -- it wasn't too far away and it would be a nice easy kid friendly hike. And it was. 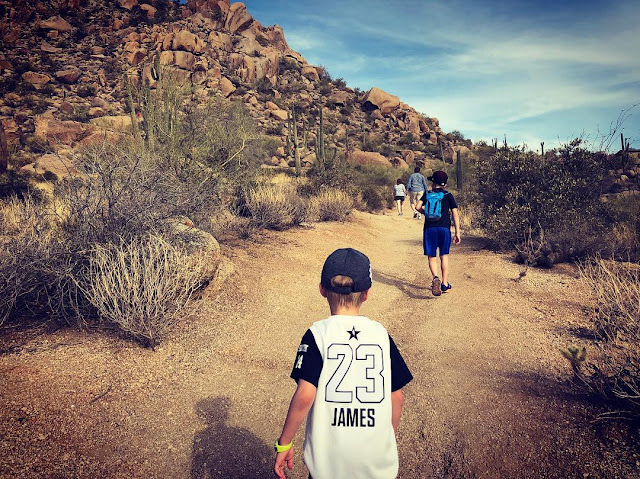 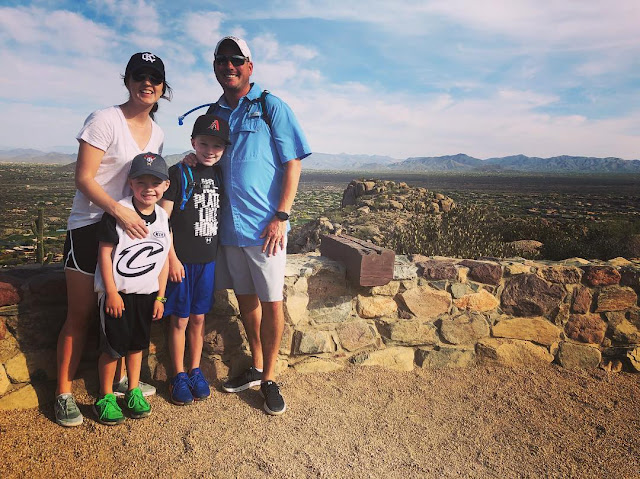 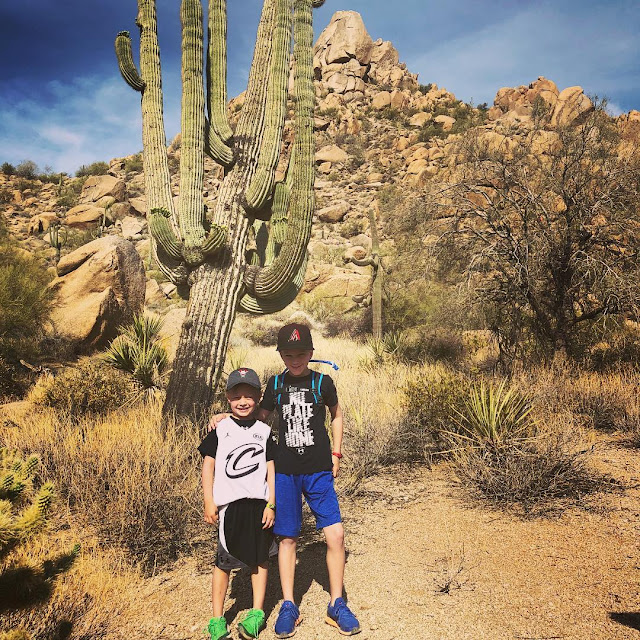 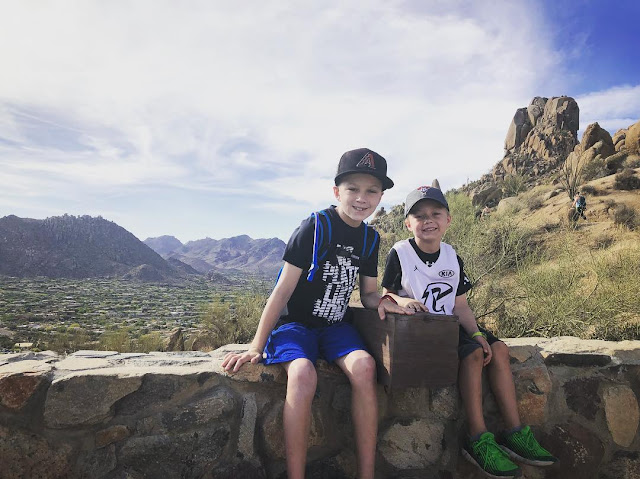 But by the time we were finished, it was HOT and we were all ready to hit the pool. Where we tossed the football back and forth and played countless games of ping pong. We enjoyed lunch, beverages and smoothies for the rest of the day. We may have even sang "Happy Birthday" to Logan with a candle in his smoothie. 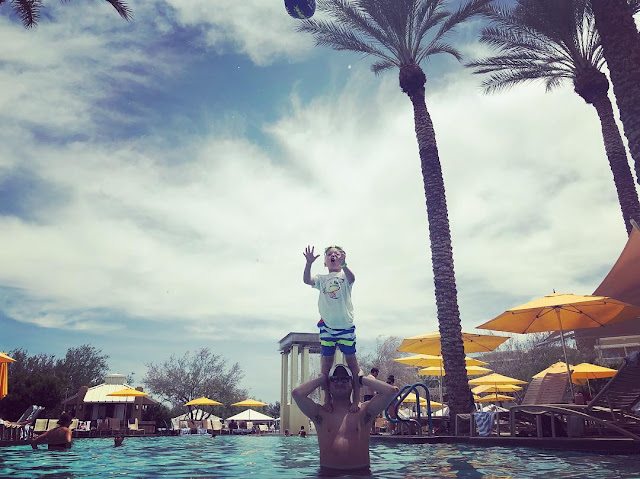 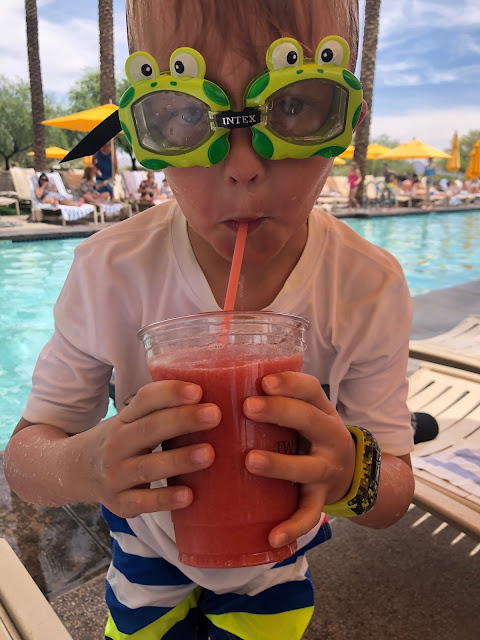 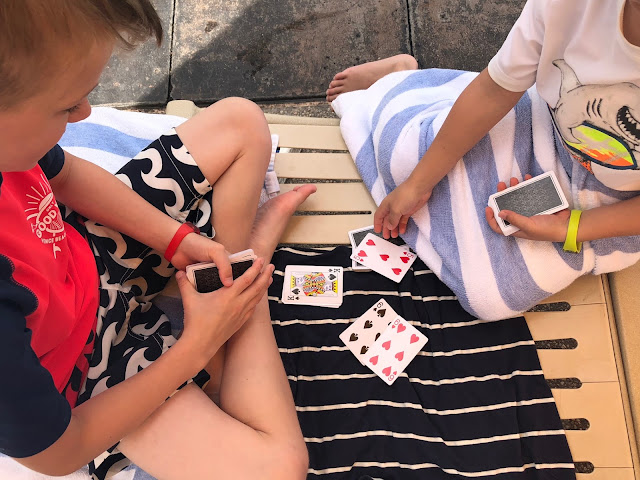 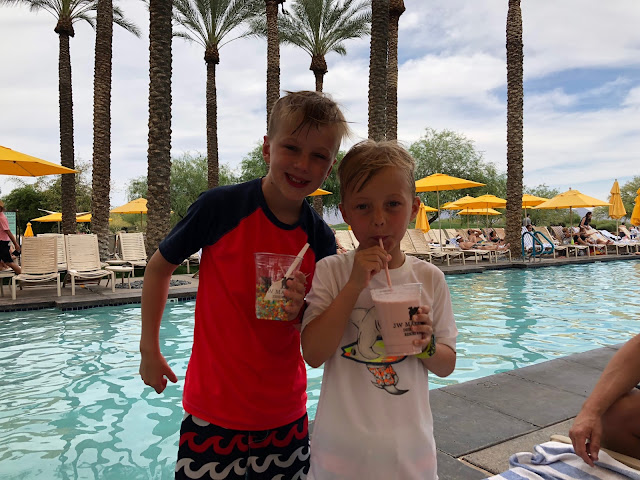 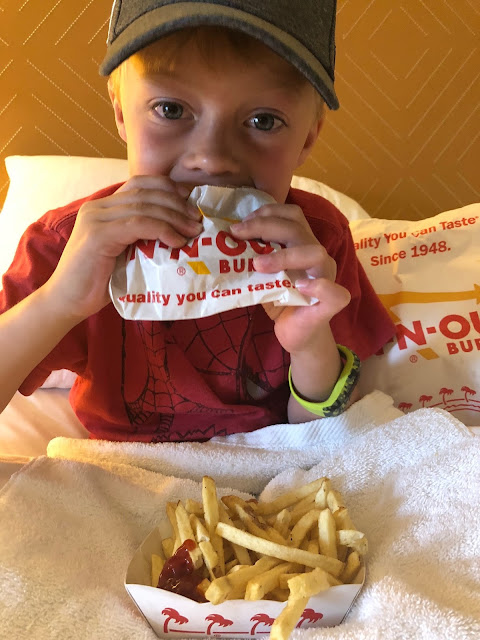 We finished the evening off with a meal from In-N-Out. The boys and I have never experienced an In-N-Out burger so we were all pretty pumped and it didn't disappoint. It was an early night for us though, we had a 6:55 am flight and so at 9, lights were out but after we captured one last picture of Phoenix--the sunsets were beyond words.

Cheers to a healthy work/life balance which is only made possible by wonderful bosses who GET IT. 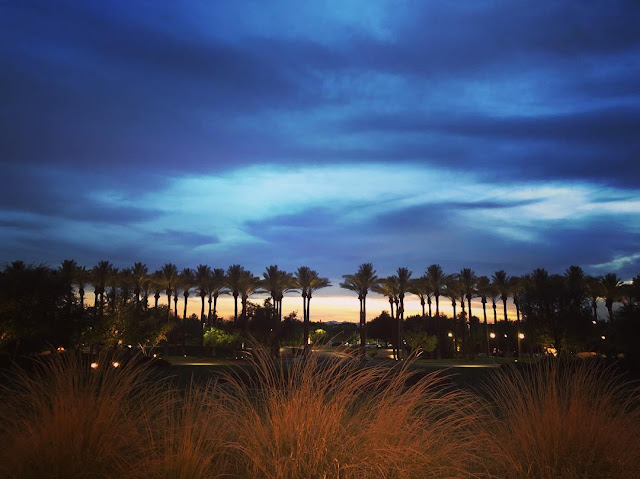