The official start to summer for the Souths is marked by our first trip to the lake. Like last year, we decided to head down with Adam and Becky, Janet and Craig for the holiday weekend -- we were all ready for some family down time & some rest & relaxation. I took a half day off of work, picked up the kids from their first day of summer break & loaded the car. We just needed daddy--who didn't get home as quick as we would have liked BUT at as soon as he was, we loaded up & off we went. 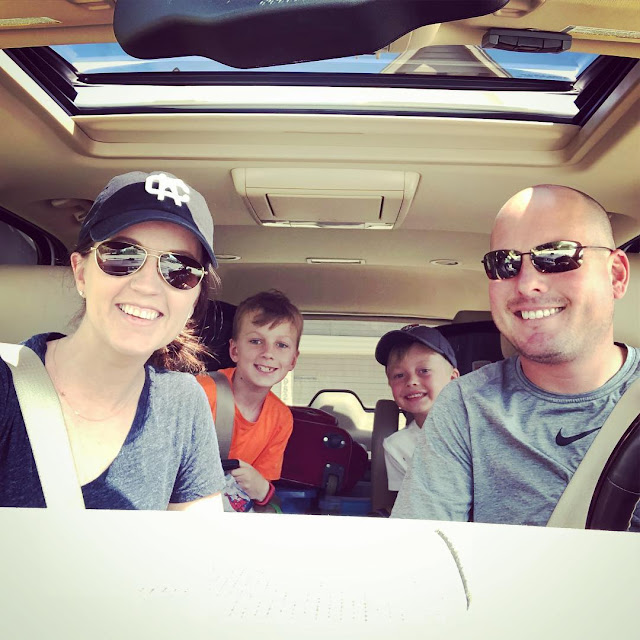 The drive wasn't too bad--especially for a holiday weekend. We stopped at our favorite little Mexican restaurant, Tapatio, in Sedelia to let some of the traffic go on by and to allow the boys to run off some energy--by no means is it a long drive BUT it never hurts.

As soon as we arrived the boys had their swimsuits on & were in the water -- well, after finding their life jackets. If the next two days were anything like how the weekend started, we were in good shape.

Saturday morning the boys were up and ready to head down to the water at 8:30. Before the day got too crazy I made them stop to take our annual South Brothers' LOTO picture. I have this same picture of the two of them since about 2013 and is one of my favorite traditions.

The boys played and played and played. There was one thing that I noticed though, Kaden seemed a little hesitant when it came to things that he had done the summer prior. One example, the paddle boards. He talked all the way down about how excited he was to get them out and wanted me to get them out on Friday but I told him those would have to wait until morning. Morning rolled around and he didn't really want much to do with them. He said he was afraid he forgot how to do it. That he wasn't sure he could figure it out again---this worried me because I knew how much he was looking forward to it and I hated seeing fear win BUT after he saw Logan and Colton out on one, he was ready to give it another try too. That's all it took. He was hooked once again. 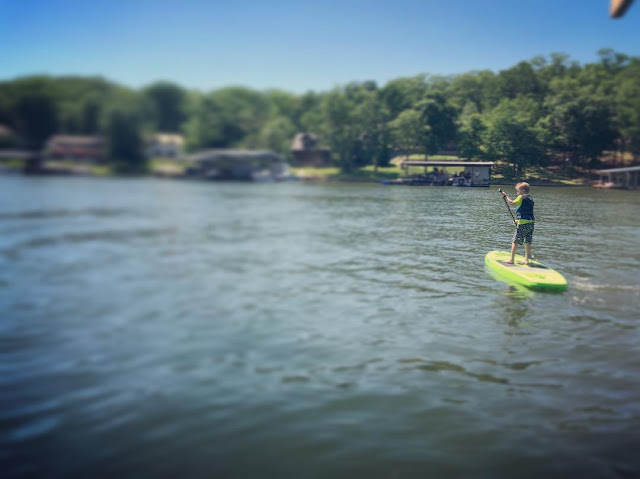 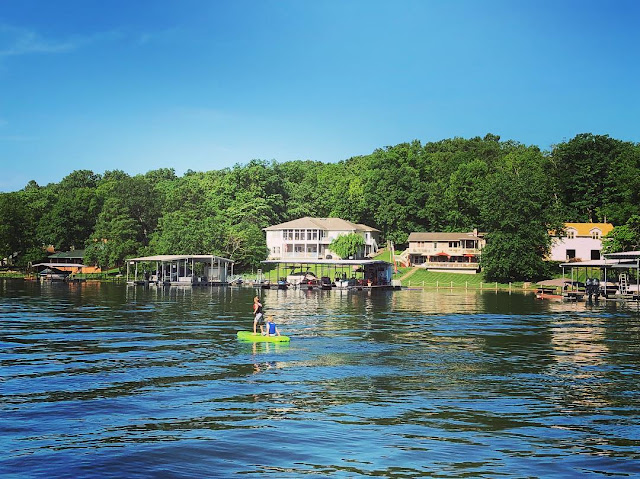 The lake cabin has become one of my happy places. It's calm and quiet. It's quaint. But most importantly, my favorite people are always with me & although it stinks, we don't get that great of service down there so you are forced to be present which is ALWAYS a good thing. 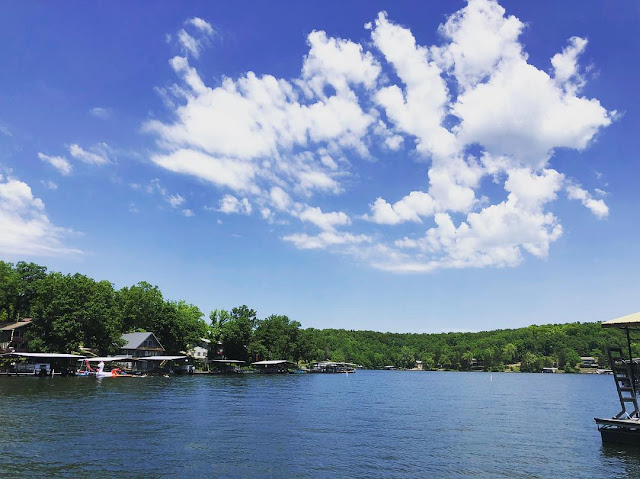 The boys spent time on the Maui Mat. They played basketball with a new hoop that Logan got for his birthday from our friend Nathan. They rode the Sea-Doo. The paddle boards. They fished. 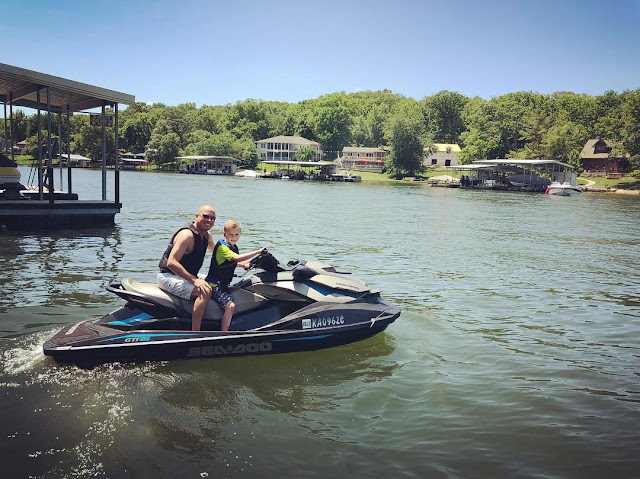 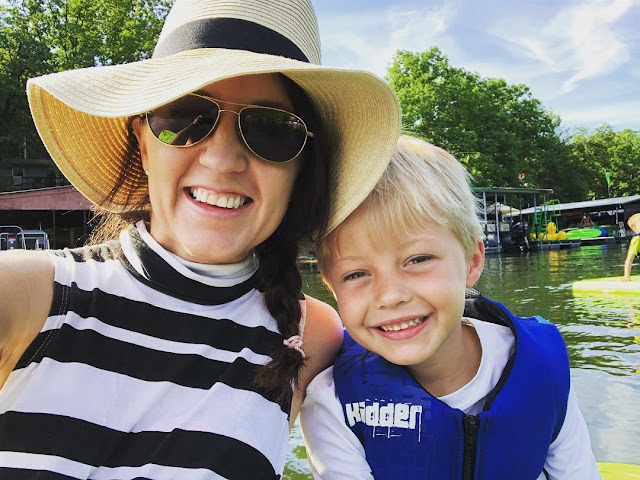 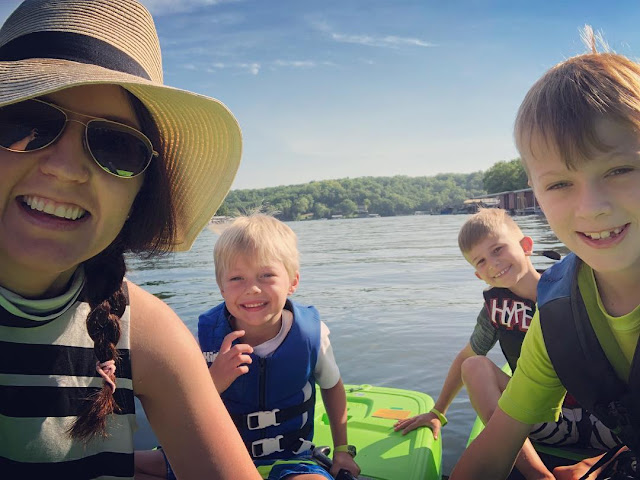 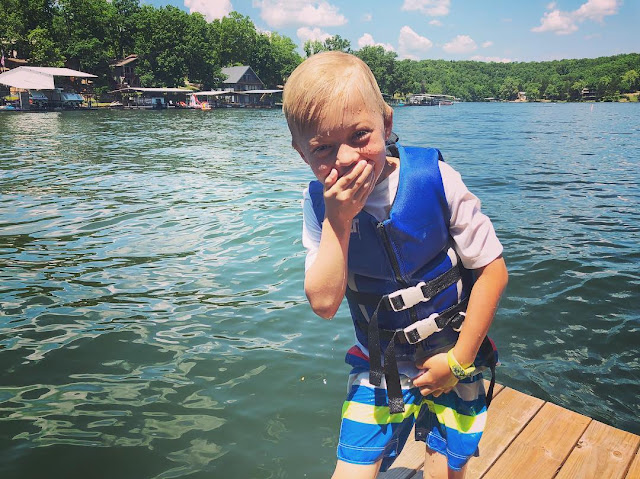 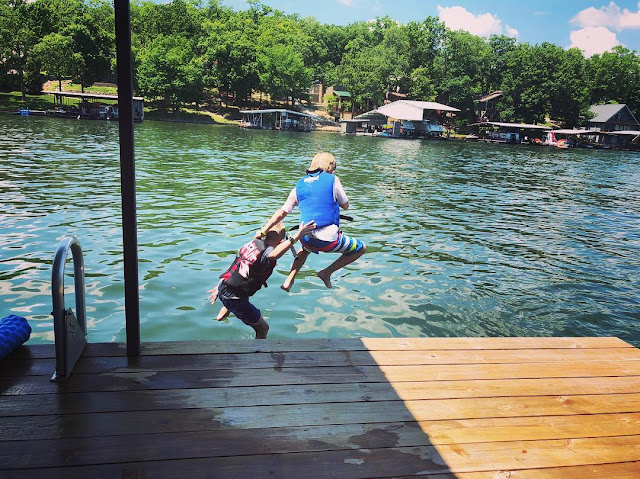 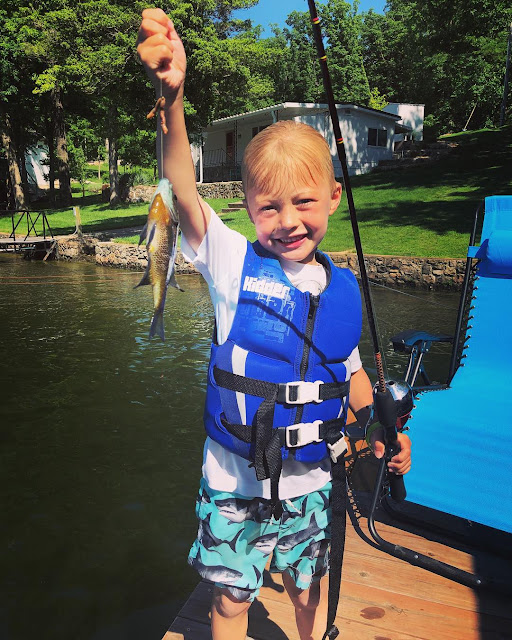 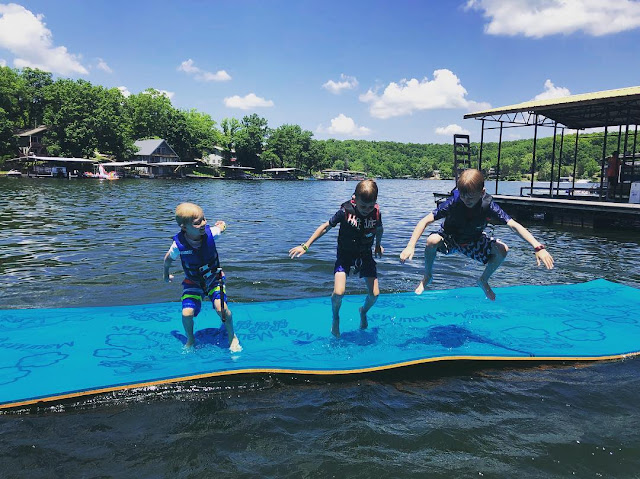 They ate crappy food like squirt cheese and crackers. They ate healthy food like salmon. And shockingly Logan LOVED them both. 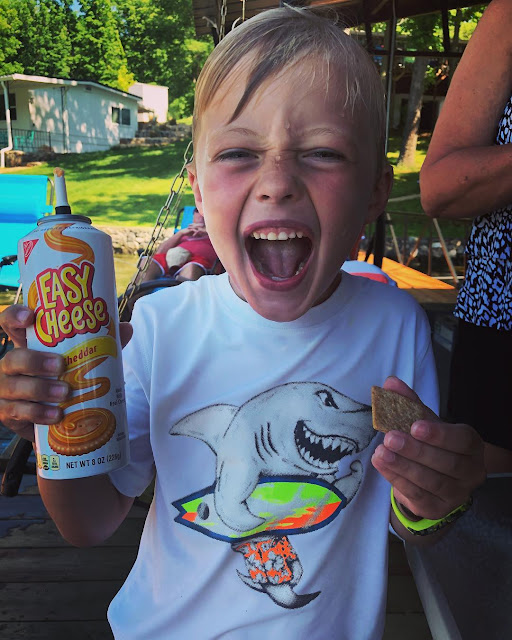 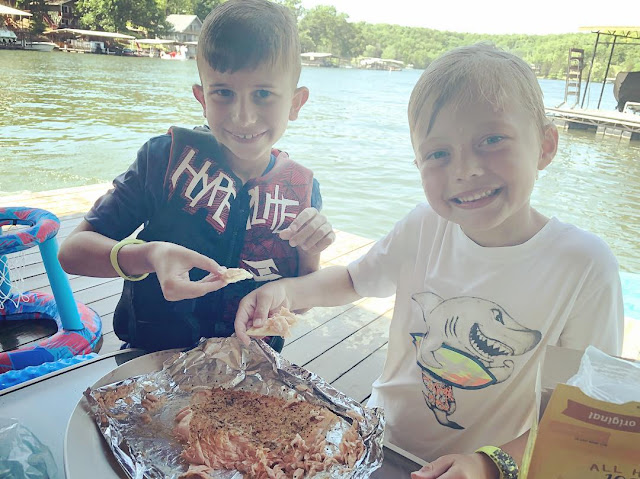 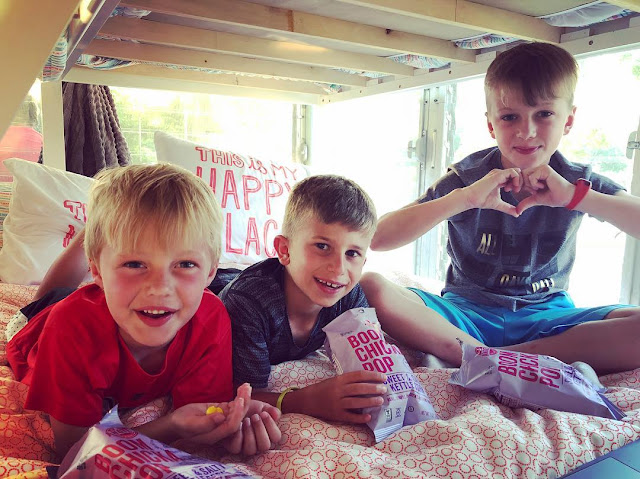 They were loving every. single. second -- until there were breakdowns from sure exhaustion -- but if you asked them what their favorite part of the weekend was, it most definitely would be the new "diving board" that Uncle Adam and Craig installed.

It was more like a jumping platform but I guess you could totally dive off of it too, like Uncle Adam.

It doesn't look too high but looks can be deceiving. & let me tell you, it was wobbly, not because it wasn't constructed well enough but because the dock wobbles on it's own due to waves and then add being 10 feet over the water, off the side of the dock on top of that too -- makes for LOTS of wobbles. Two of the three boys walked right up and didn't turn back. One kiddo had a little bit of a harder time working up the courage it took -- more on that later. 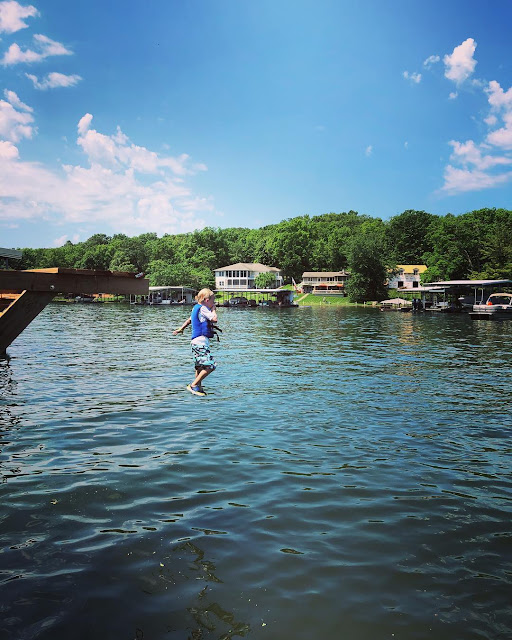 The boys played so hard. All weekend long. When Memorial Day rolled around they just weren't sure what they wanted to do. Did they want to get in the water? Did they want to fish? Did they want to chill inside? And the indecisiveness came with trying to hold back tears so we made a plan. A family plan. We were planning to leave after lunch but after talking it over, we loaded up and headed on home. Allowing the boys to rest a little on the ride home, grab a bite to eat and then once we got home and unpacked we would hit the pool. They were in agreement. So we said our goodbyes--but not for long, this weekend kicks off a summer of lake trips. 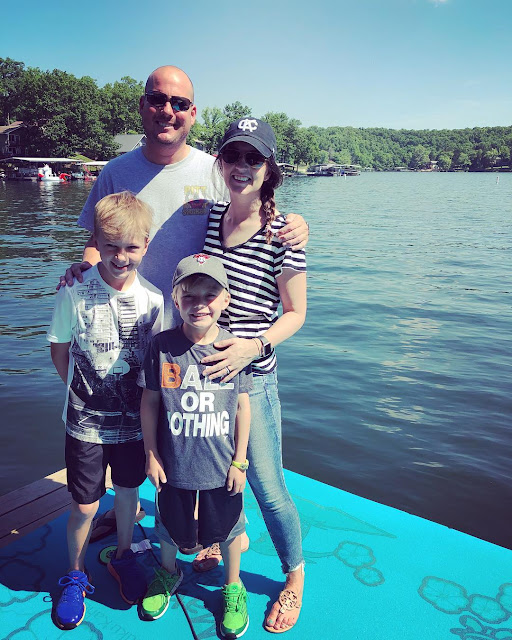 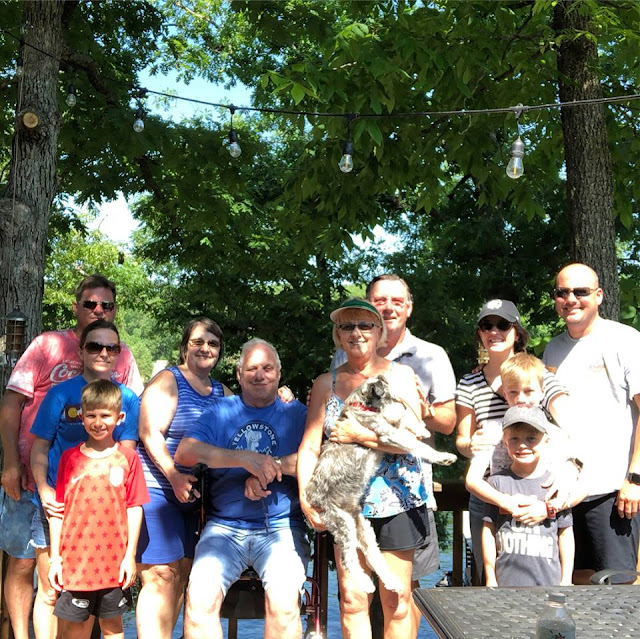