Baseball was finally here for the boys. At least they were crossing their fingers it was & that weather wouldn't be a factor once again. Their team had yet to play a regular season game but made the decision to enter into a couple tournaments this season, one at the beginning of the season and one towards the end of the season. They were guaranteed three games for the weekend...if the weather held out. Like I said, fingers crossed. 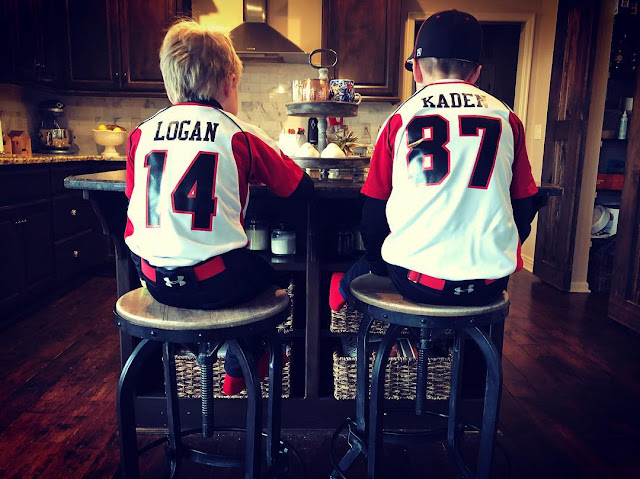 Fully dressed. & for this particular day that meant, 4 shirts, two pairs of pants & socks with FOUR hours to go until game time. They were really putting it out there to the universe.

Fun little fact. They got to pick their numbers this year. Kaden chose 87 because he loves Rob Gronkowski of the New England Patriots---could be Travis Kelce too but it's not. Logan chose 14, it not only was his basketball number, my number growing up but it was also right behind Matthew's number of 13. He looks up to Matthew and he's a good kid to look up to.

Around 8 that morning the boys started sliding practice in the house. Their energy was off the chart & we needed them to conserve that so I suggested that we rent a movie. The Greatest Showman it was. Grandma Sara was super pumped as she had yet to see it and both boys love the movie so we all took to the couch and settled in for the next hour and forty minutes.

During which I snapped a few picture of the boys--I wasn't sure their jerseys would ever be this white again. We tried a few "game face on" poses but I prefer the smiles. 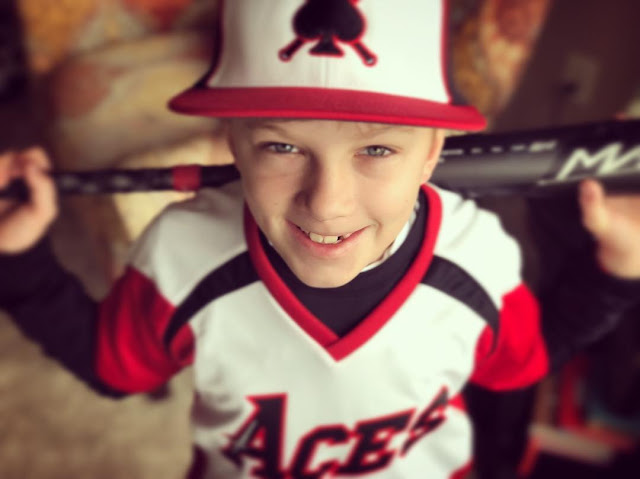 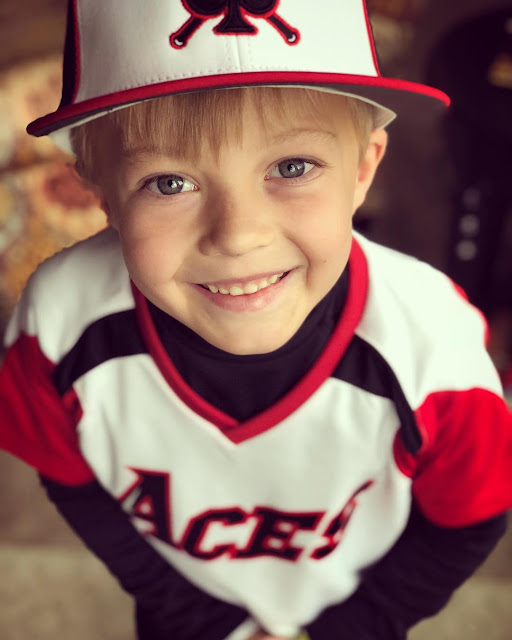 Finally it was time to load up, games were on. We grabbed a quick picture with Grandma Sara and headed to the ball fields. 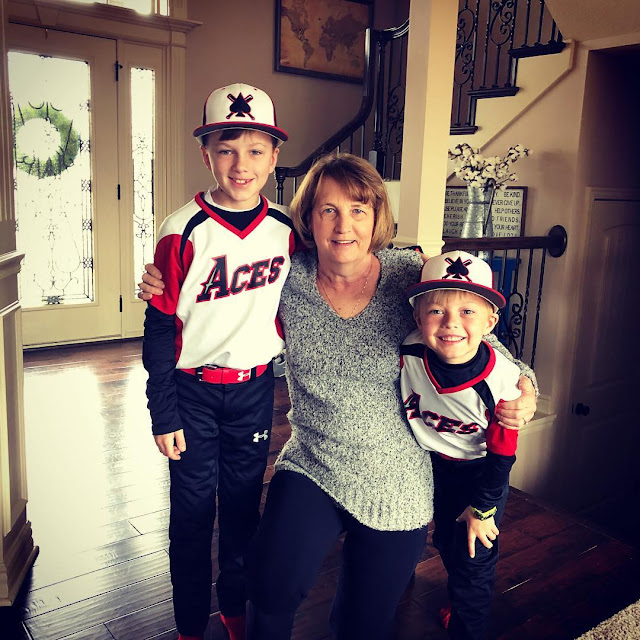 This would be the first time the Aces would be hitting off the machine this year due to the fact so many practices have been canceled with weather issues. I mean, it's snowed for the first three Sundays in April--that's more than all winter! We honestly weren't sure how the team would do and I'll admit, I was a little nervous but we settled right in. We were the home team and after the first inning it was tied 2-2 and then the other teams bats went to work, at no fault to our boys. They got single after single with an occasional double and before we knew it the game was over. We lost that game 22-7 and they didn't even allow us to try and make up some kind of ground, which looking back, we should have been able to because scoring plays a role in the tournament seeding. On the bright side, we had our first game under our belt and had a few things that we knew we could work on. & that team had just slaughtered the team they played right before us, so we weren't out of it. On a different note, the wind was horrible. The boys were freezing but doing their best to hang in there. On one specific play, a pop fly went out to center field and Ben was right there, at the last minute the wind took it and changed the course of the ball and it hit him right above the eye. You could hear it from the stands and everyone went silent. He didn't go down. He kept with the ball & then the coaches ran to him. We got his mom packed up and off they went to the hospital. The boys were all so very worried, we were too. They sent us a picture from the hospital as they waited for the results stating they were following along on Game Changer--Ben is such a warrior. CT came back clean with no broken bones, he just would need to wait until he the swelling went down so he could see to play.

The boys missed him dearly.

We had a few minutes between game one and game two. The boys were FREEZING. We did our best to shield them from the wind and put up tarps around the dugout, blankets on the benches & handed out hand warmers galore. They were all able to grab a quick bite snack and a drink before taking the field again. This time, the outcome was more in our favor. We were at bat first and from swing number one the boys didn't look back. Our bats went to work and the boys played a very sound defensive game to come out on top 19-10. Now, mind you this was a 7U team, so mostly 7 year olds, I guess they may have the occasional 8 year old but mostly 7 year olds--but we have a few ourselves. Matthew, Caden, Drake, and Luke are all 7, Logan is still 6 but will turn 7 next month, so we've got ourselves a young little team too and they showed up.

My favorite part--the South boys covering the middle at 2nd and short. & also Logan's never-ending smile (even in 20 degree weather) & Kaden's sportsmanship and encouragement he showed. These things meant more than any scoreboard. 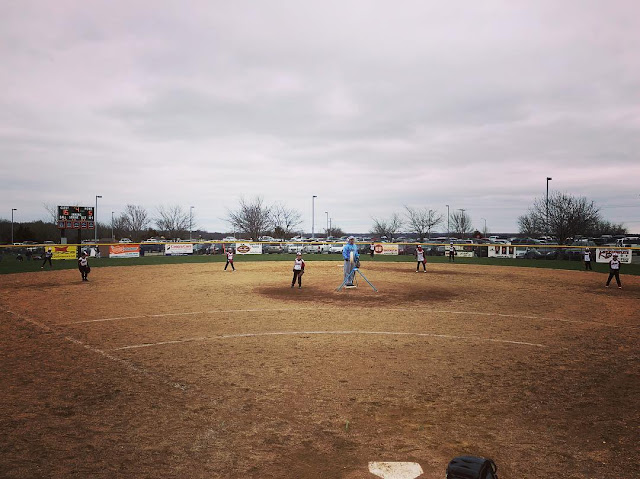 After the tournament was over we ditched the cold for some warmth of Johnny's and the kids continued to play -- Gold Tee though. While we were sitting down warming up, we got the message that Sunday's games had been canceled and there were mixed feelings for sure. Sad they weren't going to get to play the rest of the tournament but happy they weren't going to have to be out in the snow for which it did snow. Instead we stayed in our pjs all day watching movies and playing games.
Posted by Kayla South at 9:10 AM