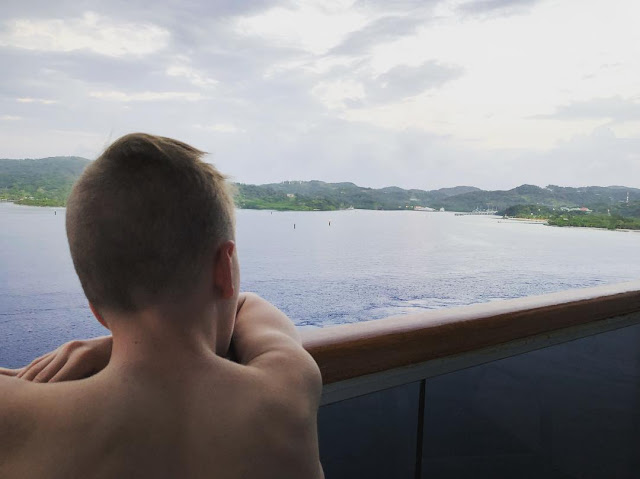 After two and half days at sea we were finally seeing land again-we woke in beautiful Mahogany Bay, Isla Rotan -- Honduras. This would be the first of our three ports & probably would be the port that had the excursion we were most excited about which meant we were all SUPER excited to get off the boat. As our captain backed our boat into position and brought it to a stop we were planning our morning. We had to meet for our excursion after lunch so we had about 4 hours to waste--but we weren't going to waste them, we were going to ROCK them. 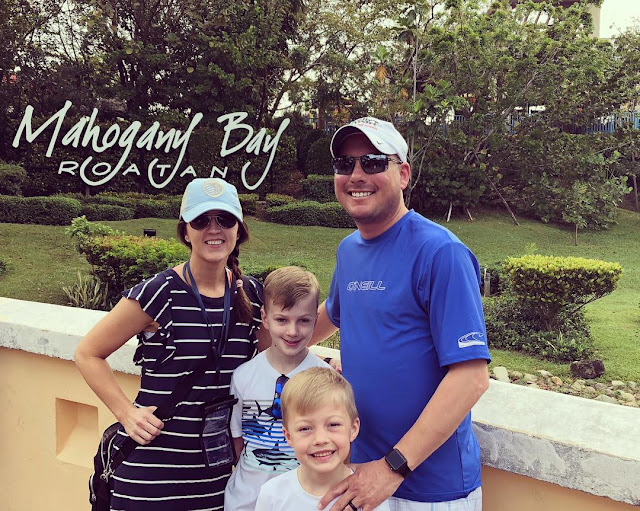 The port here at Mahogany Bay wasn't much to write home about--it wasn't horrible, there just wasn't a lot to do and there was zero food, which we didn't realize until it was too late. As soon as we got off the boat we noticed there was a chairlift that would take us to a private beach. It was only about a 15 minute round trip so we totally had time to put our toes in the sand. So we did. 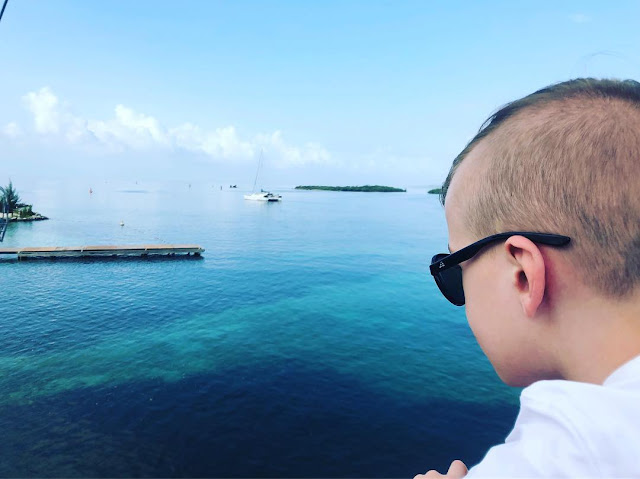 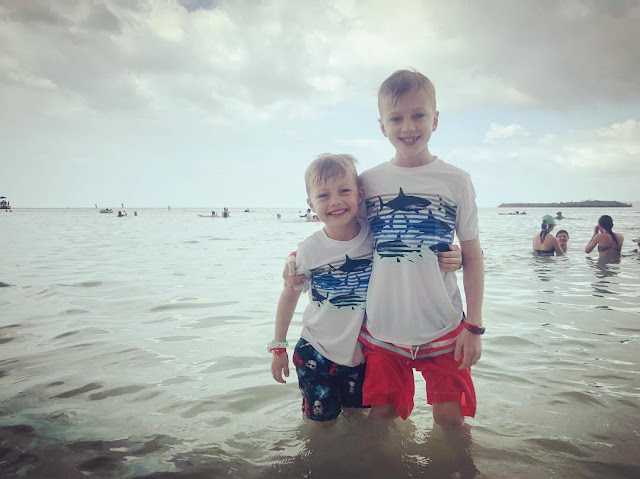 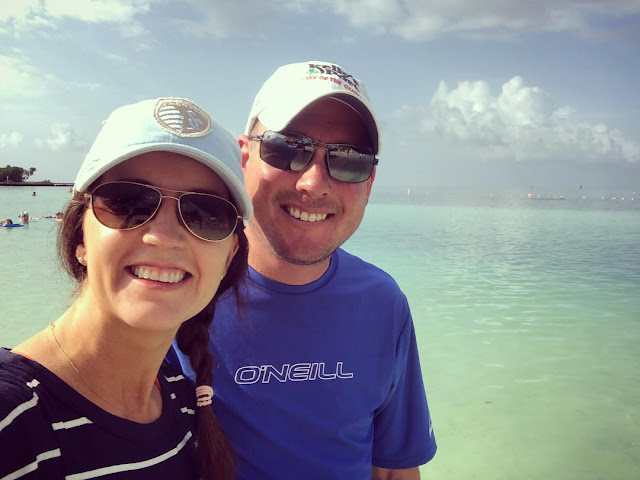 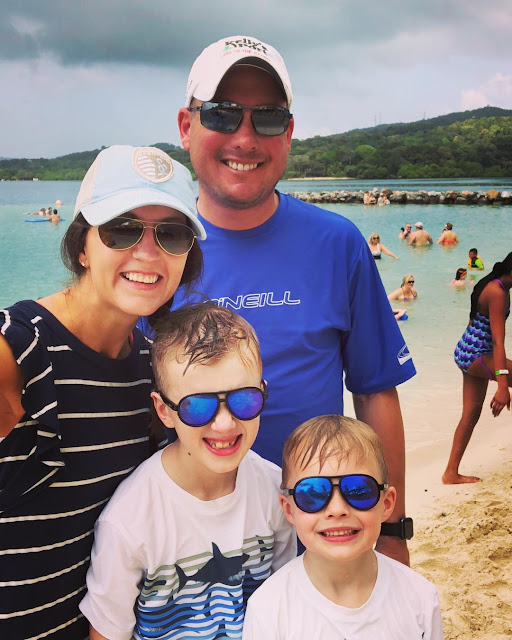 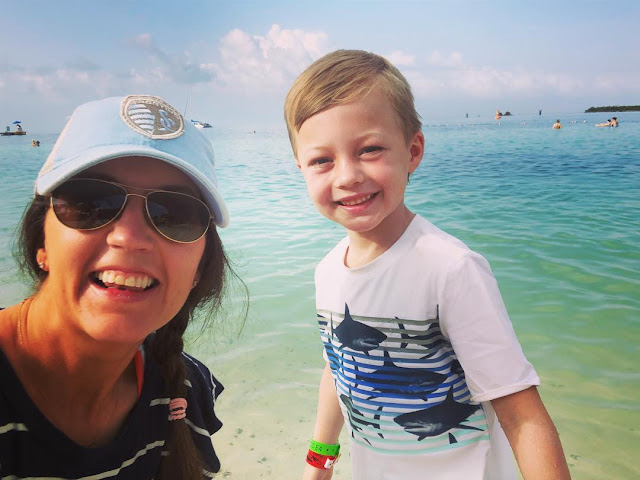 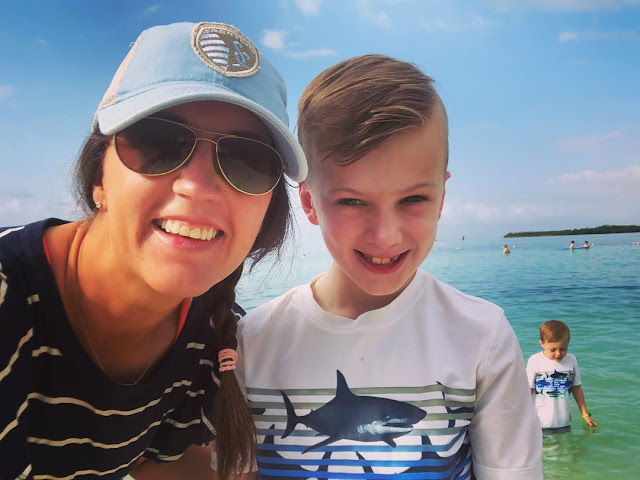 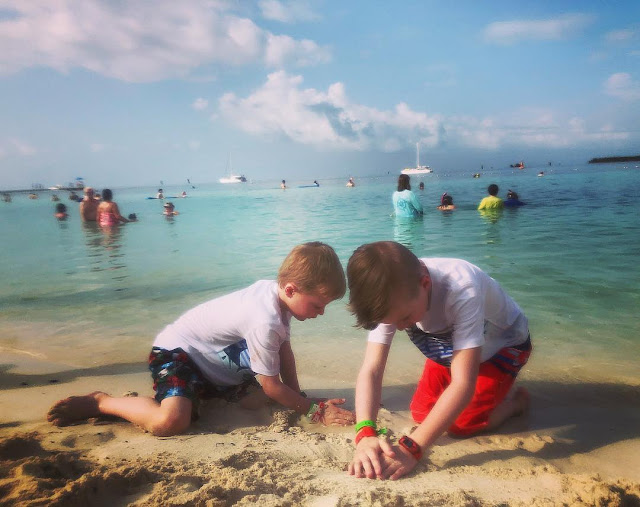 While we were on this little island and the boys were playing in the sand Justin went exploring to see what there was to do. He came back telling me about FISH THERAPY. What?! They have it here--Yes, Please! I wasn't the only one that was curious, Lil Logie jumped right up and actually was the first to go. His facial expressions were amazing, and the little giggle--I mean, STOP! 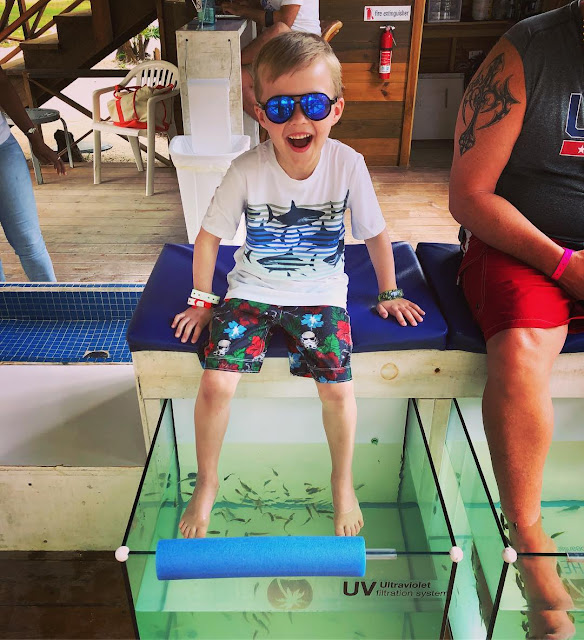 Then it was Justin and I's turn -- it was so weird. Not super ticklish but ticklish for sure. 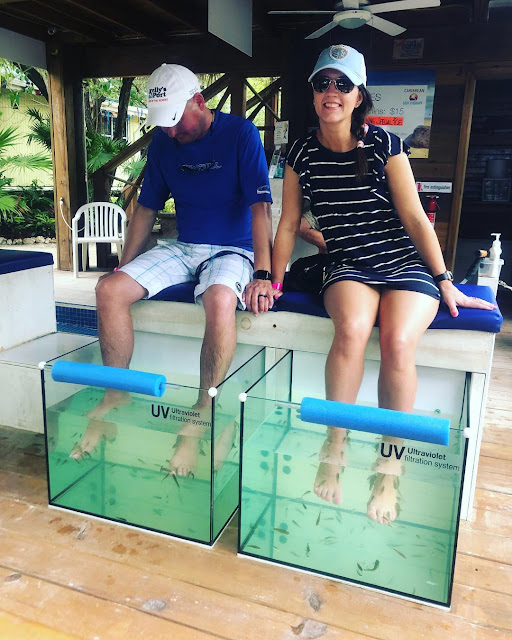 We decided to eat lunch back on the ship, it was a short walk from the port and we really didn't have many options at the port--we left them all behind at the beach and by the time we left the beach, it was PACKED--we wouldn't have been getting our food anytime soon.

As we stepped back off the ship, we were in a complete downpour. We made the most of it, I mean, we already had our suits on, what was there to lose. 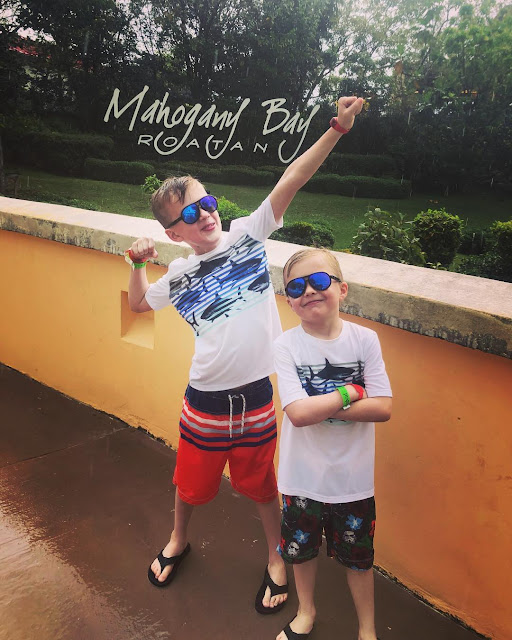 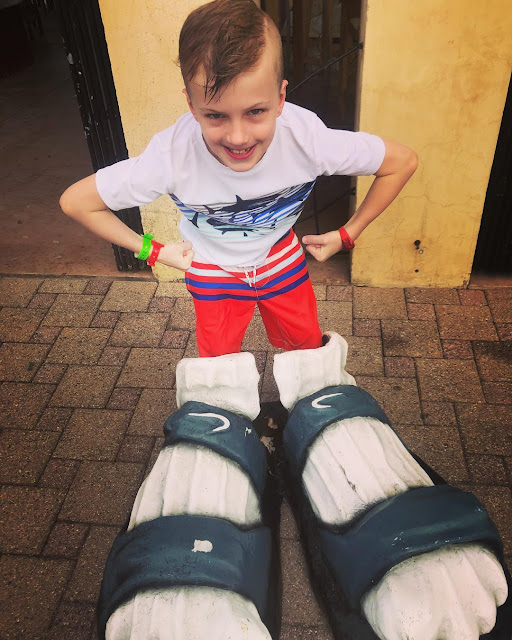 The sun started to come out as we loaded in the buses and we were keeping our fingers crossed it would continue--we were headed to meet our new friend. Sadly, the rain continued but it was only a drizzle and the show went on.

We arrived to our destination and another boat came to pick us up for a short little ride, which was just charming. 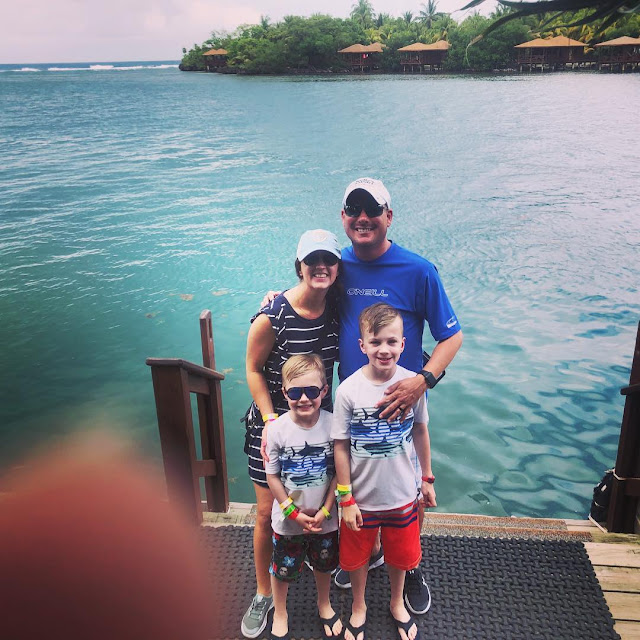 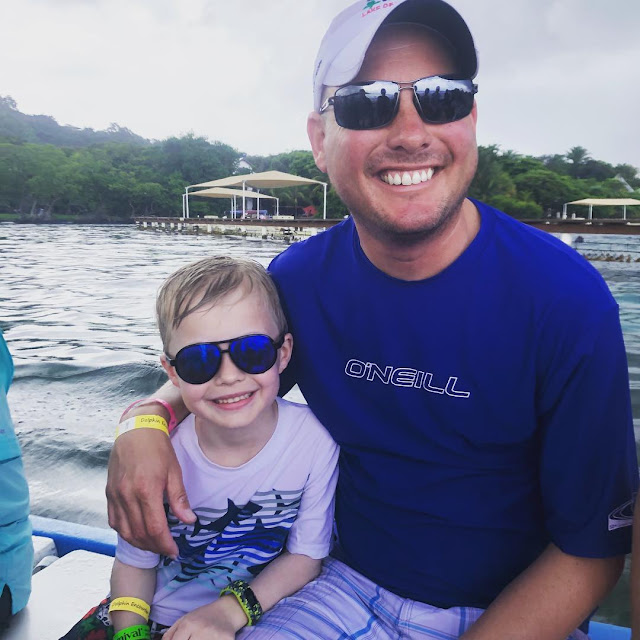 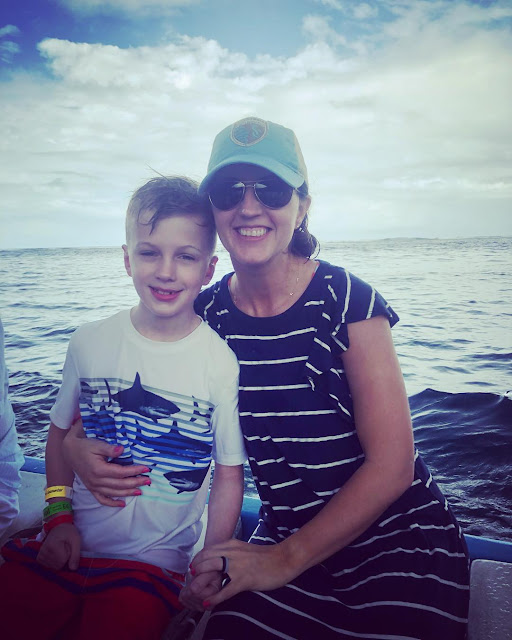 And then there they were--dolphins. We were swimming with dolphins today.

Both boys requested to do this excursion and honestly, I was totally for it too, so was Justin. However, I knew there was a chance that Kaden wouldn't be all about it when we got there. Sadly, I was right. Kaden isn't one who adjusts quickly to new situations. He likes to know what is happening, when it is happening. He likes to be prepared, in control. Honestly, he gets that from his momma but where I can talk myself into letting go and relaxing or my curiosity overtakes my fear, he just isn't there yet. He really didn't even want to come into the water BUT he did. He held Justin and I's hands (we were suppose to hold hands and stand shoulder to shoulder) and he stood right there by us as Maury, our new friend, showed off. As Maury would swim by for a rub down (that just doesn't seem right to say) he would put his hand on top of my hand to "pet" her. I tried pulling my hand away but he was too smart for that. When it came time for the "kiss" and the family picture with Maury he was a HARD NO. I explained that he didn't have to do the "kiss" picture but if he would be so proud of himself if he pushed through to try and stand by Justin during our family picture. He wanted to try. 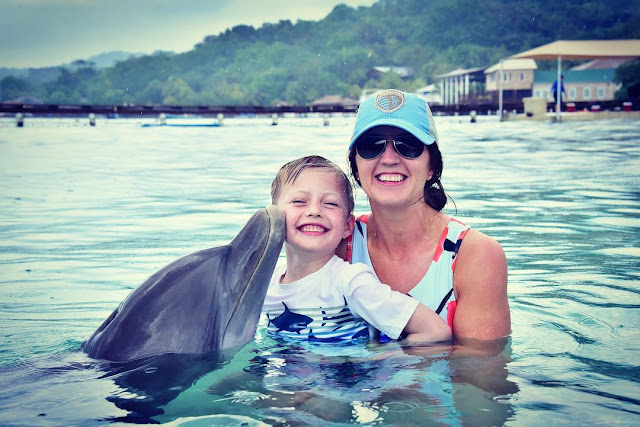 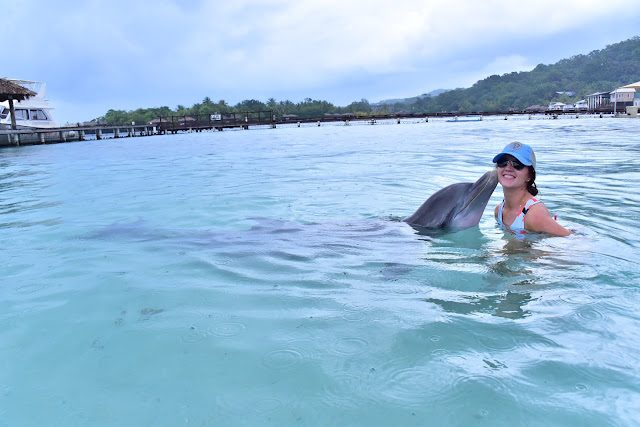 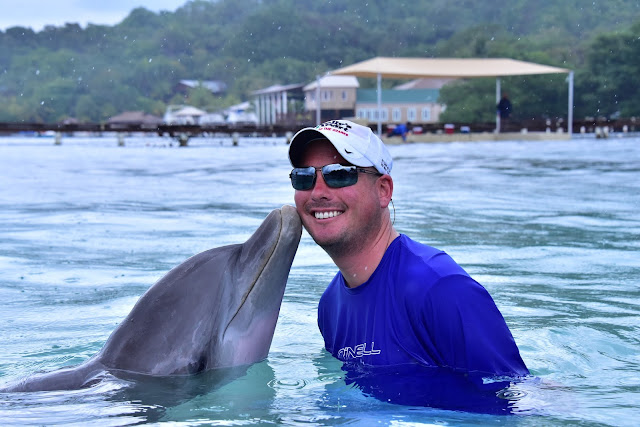 And he did great! He wasn't right next to Maury but he was as close as he felt comfortable and actually got closer than I thought he would without Justin and I being able to hold onto him. He was so proud of himself and I couldn't have been more proud of him too. 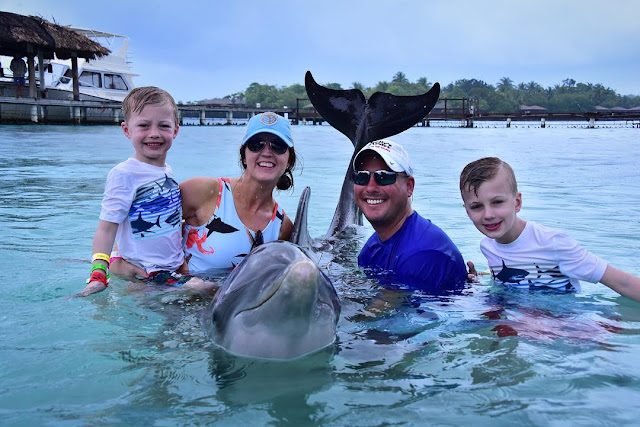 After each family got their picture taken with Maury we got to use our own phones to capture a few tricks. One of Maury's specialties is picking up a "present" and presenting it to someone in the group. The trainer doesn't give Maury specific instructions on who, she gets to choose. Justin and I both looked at each other and just knew that she would choose Kaden but thankfully, she chose Logan who was all about it. Logan had to take the present--a rock from the ocean floor--from Maury's mouth. What a cool experience for him & I got to capture the whole thing with my phone. 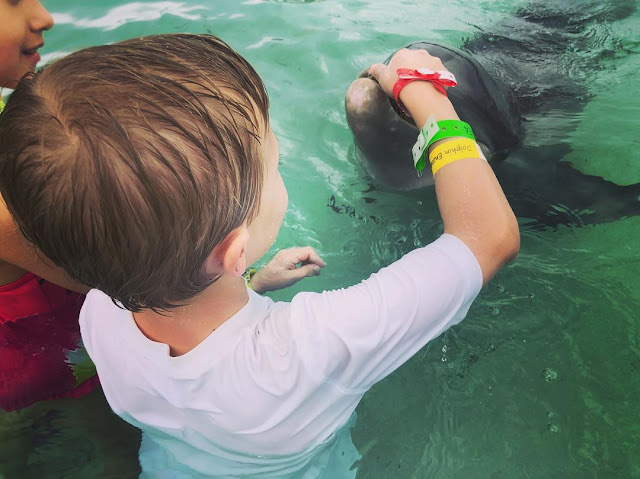 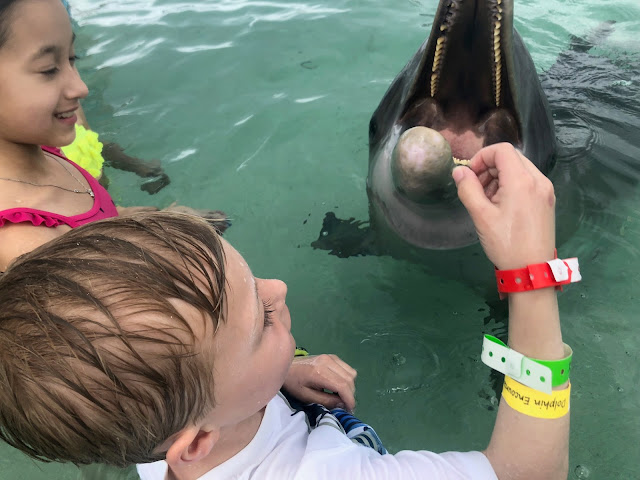 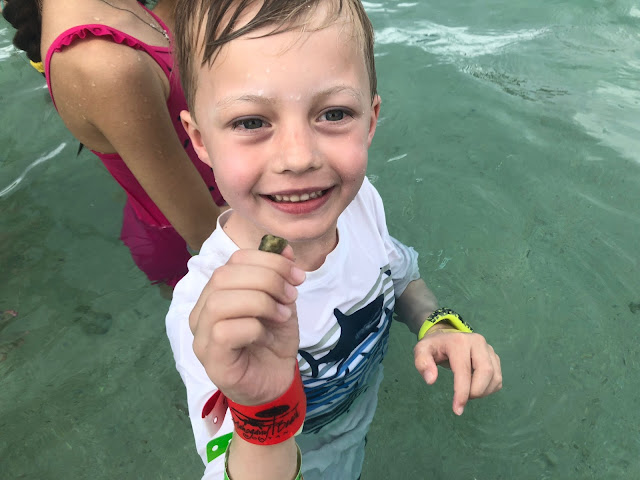 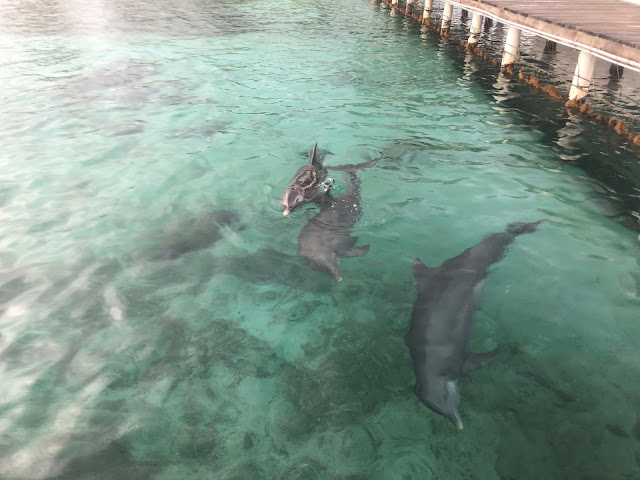 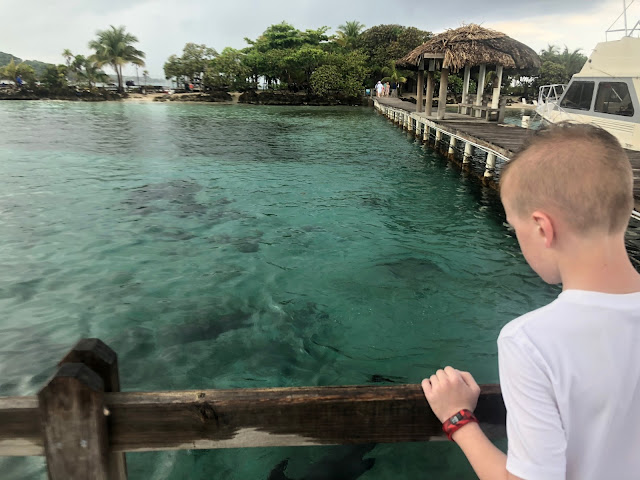 We finished our time with the dolphins and headed back to the ship & on the way back, the rain showed us who was boss. It was another HUGE downpour. We made a run for the port & tried to hang out in the store before boarding the ship but honestly, it was crowded so we just went for it again. We went straight to the room, showered and got on CLEAN, dry clothes for dinner, which was highlighted by a rainbow. I proceeded to tell the story of why rainbows exist--something I do most every time I see one but I love it. The kids and Justin--ya, ya, ya. 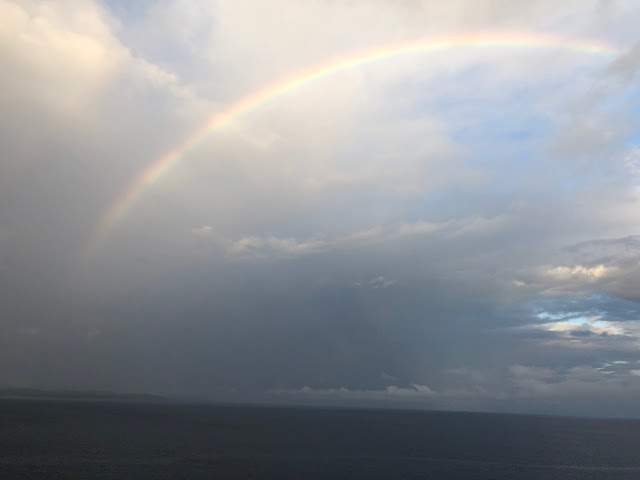