We had such a wonderful time on our Carnival cruise last year that we decided to do it again. Same boat. Same port. Different destinations.

I was traveling for work right before our vacation started and the airports were PACKED. The TSA pre-check line longer than the regular security line & the lines to check luggage were CRAZY. So, when I returned home I told Justin that we needed to ensure that we gave ourselves plenty of time at the airport to find parking, check our luggage and get through security.

Fast forward to noon on Saturday--no lines ANYWHERE and I had our family at the gate with almost two hours to go. So we got drinks. 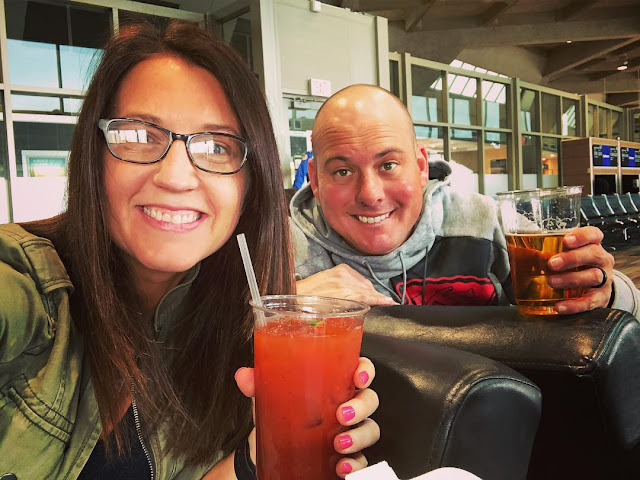 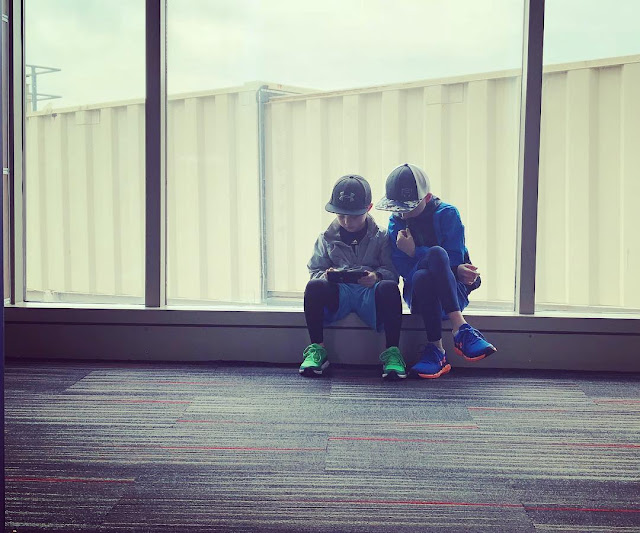 Our flight to NOLA was packed full. We had went ahead and purchased the early bird tickets through Southwest hoping that we would get a few A boarding passes but NOPE, B1-4 which meant every family would be boarding before us unless we jumped on that bus too. We did. We lucked out too because an attendant was standing in a completely empty row of chairs towards the front of the plane--I asked her if we could sit there and she smiled at the boys and helped usher them into their seats. They settled in, pulled out their electronics and patiently waited for the drinks to be served. 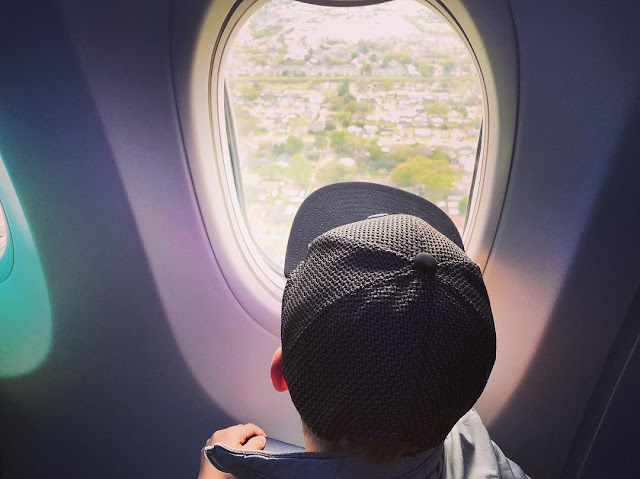 We arrived in NOLA just after 4 & as we got closer and closer to our hotel in the French Quarter we noticed there were a number of streets closed with parades happening. We jumped out of our Uber, dropped off our bags and went back out to join the festivities. And to find food---we were so hungry.

We didn't stay out late as we were all super tired and wanted to make sure we made it to our favorite breakfast spot before it got too crowded & thanks to my awesome navigation skills--we did just that. Walked up with no line, left with about 40 people waiting. It's called the Ruby Slipper--a must eat if you are in NOLA.

Finally, it was check-ya later NOLA, we had a boat to catch. 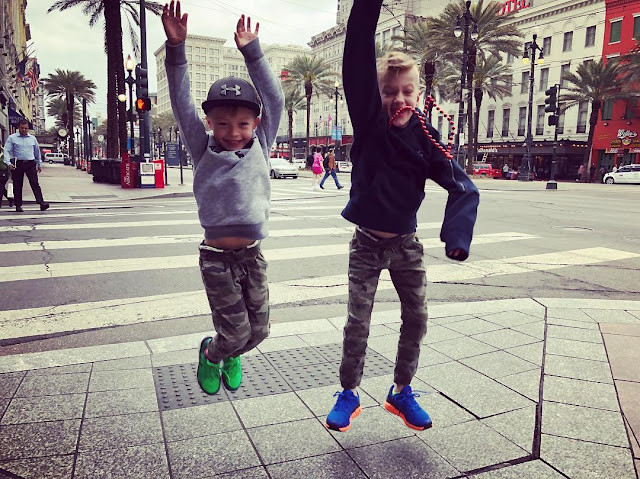 Last year was our first time cruising in a long time--like maybe 10 years prior to that. We learned a lot. The cruise lines allows you to choose a check-in time which helps speed up the boarding process because not everyone is arriving at the same time. However, the trick, come a little earlier than your arrival time. They don't turn you away, there is literally no lines for anything (even if you waited for your arrival time there wouldn't be lines) and act like you don't know where you are going and they usher you right on through. From the moment we arrived to when we boarded the ship was maybe 45 minutes. So smooth.

It was raining again in NOLA--it rained last year too. But this year, we knew the boat, we knew where to grab food and more importantly, where the all you can eat ice cream cones were. Logan declared he would eat at least 12 on the trip--a good goal as he isn't our sweet's lover. 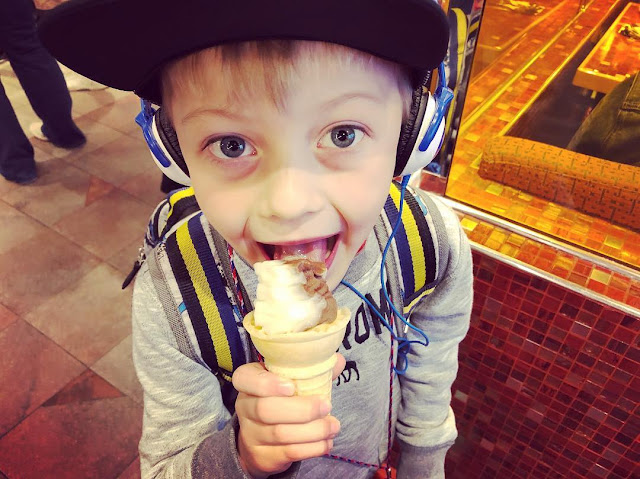 Finally, it was time for us to get into our rooms. I won't lie, I kind of screwed this up for us. Four days prior to our cruise living I received a call to upgrade to an Ocean Suite -- there was a charge for it and one that I thought Justin would be like, "Nahhh, we don't need that" so I said thanks, but no thanks. I called Justin and told him, he of course said ABSOLUTELY, you had me at priority boarding. Well, I tried calling back, I'm talking minutes later and it was already taken. So here we were in our regular balcony---which had plenty of room for us and worked out just perfectly but still, the upgrade would have been nice. 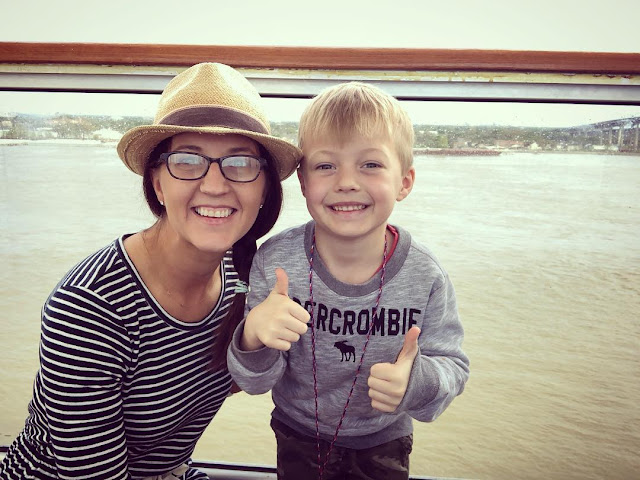 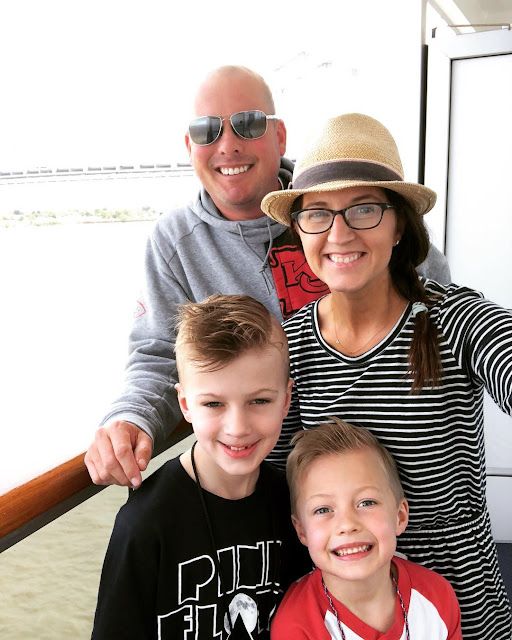 And played a little mini golf which they referred to all week as Top Golf... 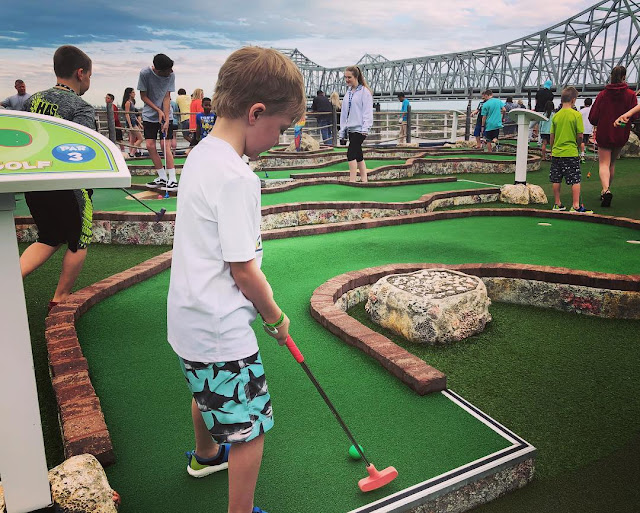 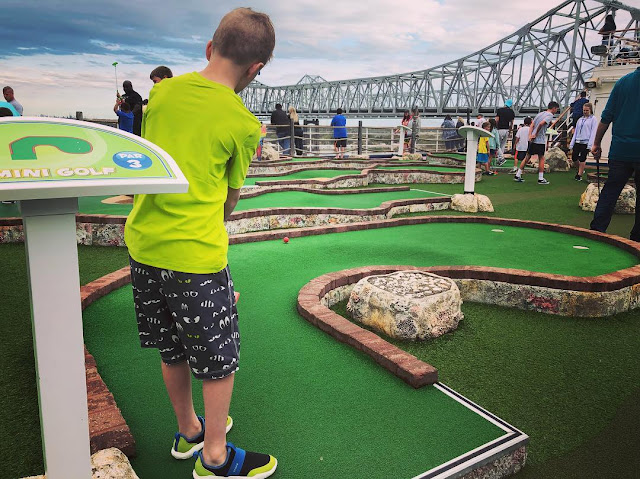 and then the boat started moving, we were on our way. 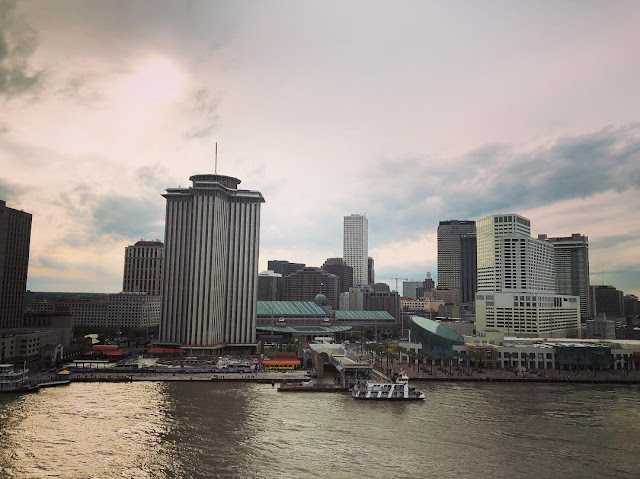 Night one we took in a little karaoke & another ice cream cone or two. The below shot of Kaden makes me shake my head and for more than just one reason too. One, he looks like he's 12 not 8 and two, he's smiling because there is a cute blonde singing a song. 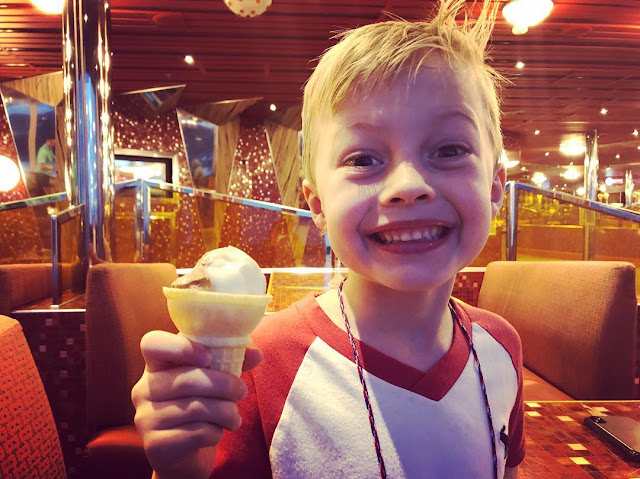 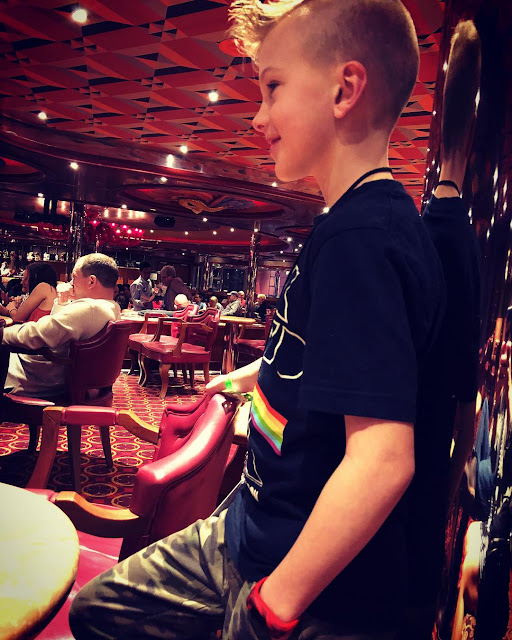 The week had only begun and we were already finding our groove.