The Stealers Season Comes to An End

Another basketball season for Kaden and I comes to an end.

It may have not been the season that we had hoped for. We didn't win as many games as we would have liked but winning isn't the only thing that matters when you are playing youth sports so we tried focusing on that.

We went into tournament play seeded 9th out of 10 team. I'm not sure we deserved the 9th place seed but that's how the cookie crumbles sometimes -- we ended having to play a team that beat us pretty good the first time, two more times where no other team had to. Instead they played a team which everyone beat handily, that game for us was canceled. Anyways, we entered the tournament as the 9th seed & had an uphill battle ahead of us.

As the 9th seed we took on the 8th seed a team that we went into double overtime with and lost in sudden death by one basket. We knew we had a chance. We had a good game plan, could we execute it? The boys did exactly that--they executed their offense, transition offense and inbound plays like never before. I had been saying it all season long, we just had to get our shots to drop, defense was typically always solid but our shots just weren't going--not this game, they dropped. 22-15 was the final score and the Stealers would live to play another game.

So we hightailed it to Chipotle for a little dinner. I asked Kaden to take a picture with me and he started laughing after, saying he tried to be a vampire by using his rice. Sure enough. Thanks K-man. 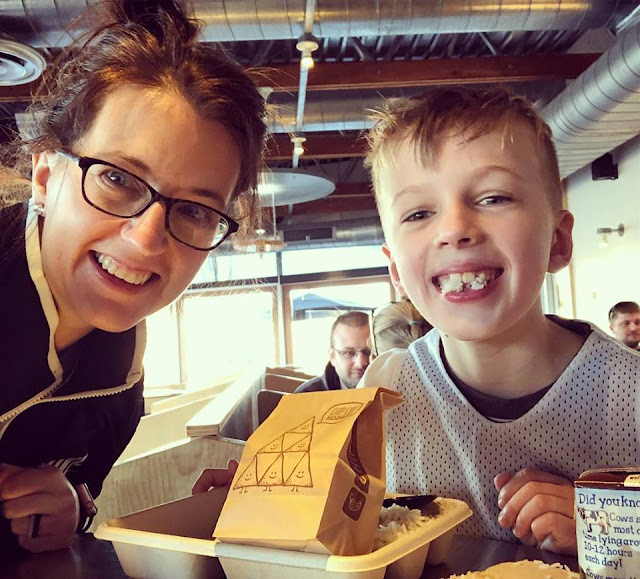 Game 2--Since we had won the first game we were now going to be playing the top seed in the tournament. This team hadn't actually been playing in our division so we weren't sure what to expect but we came with the same game plan in place. The boys had found a rhythm with the two groups 5 (one 6) from the game before that we just kept it going. And you know what, we knocked off that top seed 24-14. We lived to play another day--the following Saturday to be exact.

As the coach I did a little research before our game--I knew who we were playing. We had played them before and they had ONE player that could play better than any 2nd grader I have seen. I am still not sure why he was in our division or why his parents would want him playing with kids who were clearly not to his level, plus he wasn't from Olathe or KS for that matter, but he was signed up with the league. He wore #3 the first game we played them and this time he was #34. Again, lots of questions but I had a game plan. That game plan started with my son, South, as the team calls him.

Before the game I told Kaden that if that player was there today that I was going to have him guard him. He wasn't too excited about it because he knew just how good he was. I told him that not only did I believe that he could handle the job but that I thought he was the best person for it too. He was tall and quick with his feet and plays great defense. That's what I needed him to do. Play as good as defense as he could & then if he got beat, let his teammates help him out. He was up for the challenge and so was his teammate Griffin, he'd guard him when Kaden wasn't in---which was half the time because at this age, you play everyone equally--even when other teams don't and it's part of the rules. See---I told you there was more to youth sports than winning--following the rules and playing with sportsmanship is important and this is something we stressed a lot during the tournament.

The other part of the game plan was on the offensive side. I would have one of the bigger guys bring the ball up, Kaden if he was in, with our guard running up the other side of the lane. Although you may change who you are guarding each possession, you must stick with your man through each possession and there is no double teaming. The young man on the other team that was REALLY good, he was always picking up the person dribbling the ball, so I had Kaden be the decoy. Kaden brought up the ball, he picked Kaden up and before Kaden crossed the "defensive line to be guarded" he passed the ball to our guard and we took off. Kaden's only job then became to stand outside the three point line by like 5 feet so his man had to stay with him and essentially creating a 4 on 4 opportunity for us, without their good player in the mix.

That team went on to win the tournament for our division & actually beat the team we lost to three times by one point.

So we may not have won as many games as we would have hoped to have won but these boys, well they ALWAYS gave 110% when it came to effort and hustle. They didn't let being behind by 15 points get them down, they kept keeping with it and trying their hardest and honestly, I learned more about facing adversity from these kiddos than they probably learned from me this season.

We celebrated the season--a successful one by my standards--with a little pizza party at Johnny's. Honored to have coached this group of boys this season. 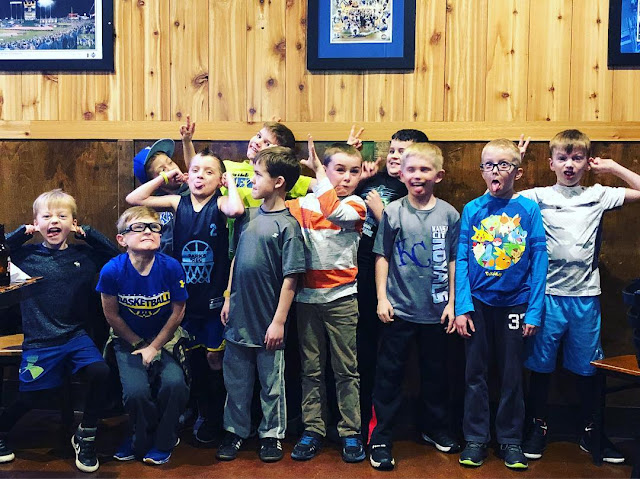 Now onto baseball.
Posted by Kayla South at 10:13 PM