Christmas at my parents' house is always one of my favorite gathering times of the year. It doesn't just mean our immediate family is able to gather together but it also means that our entire extended family can come together as well. And come together we did. But first, we got to spend a little more time at my mom and dad's helping bake desserts, snacks & even putting together a few puzzles. And before this was something Kaden had no desire to do but now, after being able to treat his ADHD, he LOVED it so much, he did two. And he did them basically all on his own too. I was just his helper. 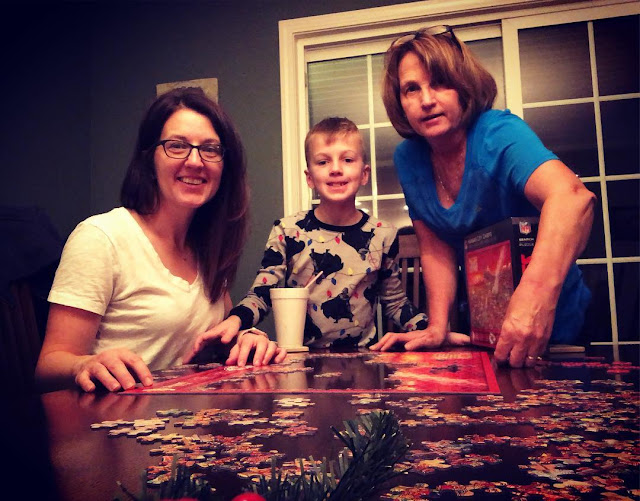 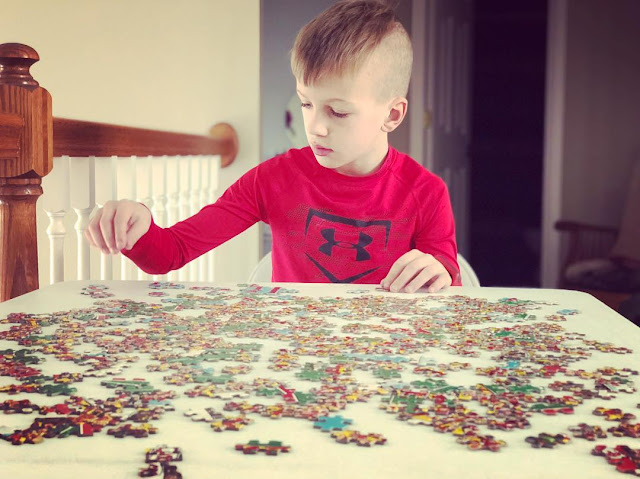 and we even got a WHITE Christmas. WE haven't seen one of these in a very long time. So of course the boys had to go out and play in it but of course, we forgot our snow boots so we made due with Walmart sack. Double sacked just to make sure. 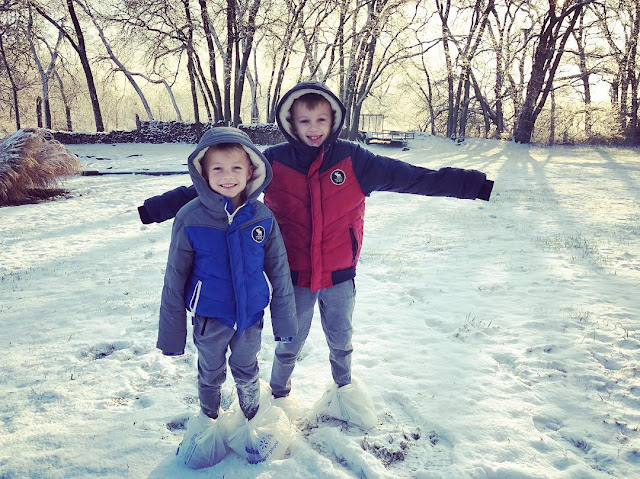 That evening we gathered at my Aunt and Uncle's for our Hartley Christmas. Each of my cousins were there. Each of their families were there. The only one missing -- Grandma Dorothy. And as I look at this picture, I can't help but think how blessed our family is. The only loss we have experienced as a family is that of my grandma & we were lucky enough to have had so may wonderful years with her. She lives in each of us and I know she is watching over each and everyone of us very carefully from Heaven. 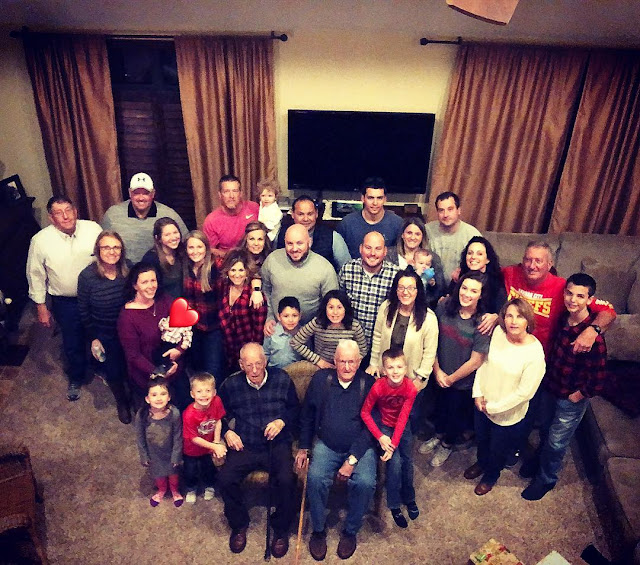 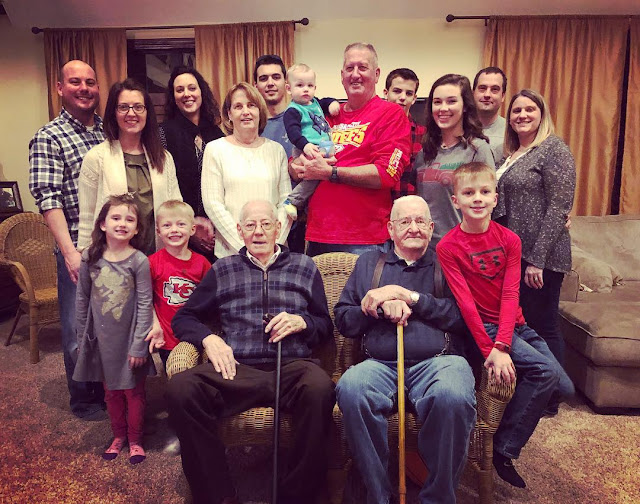 The next morning we celebrated at my mom and dad's with the boys, their cousins and three dogs, all of which were on their best behavior. We once again hired the best three gift passer-outers that we could find--thankfully they were willing to work for a few presents. 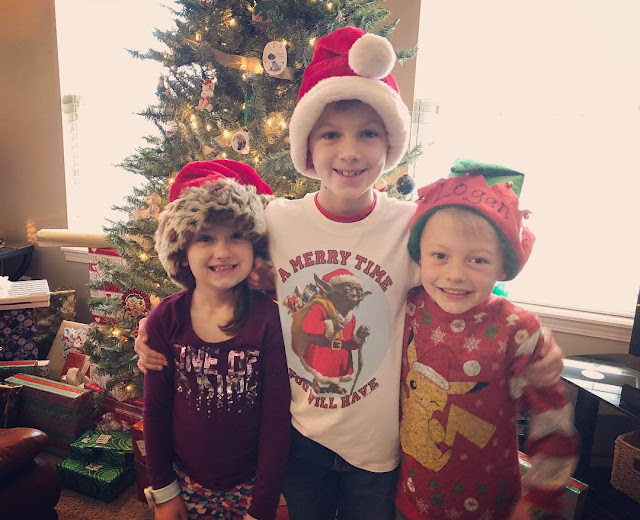 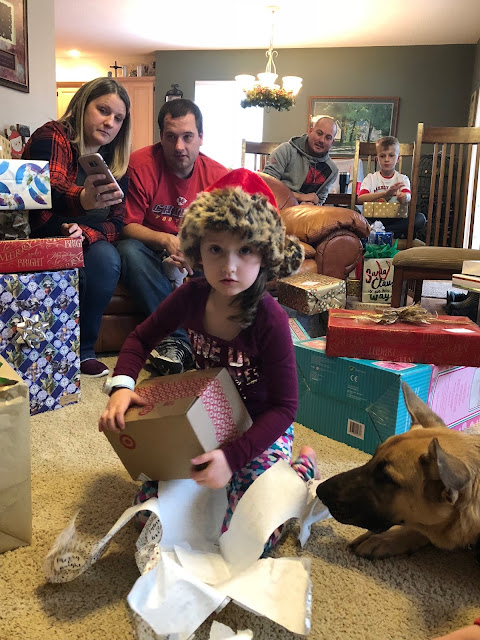 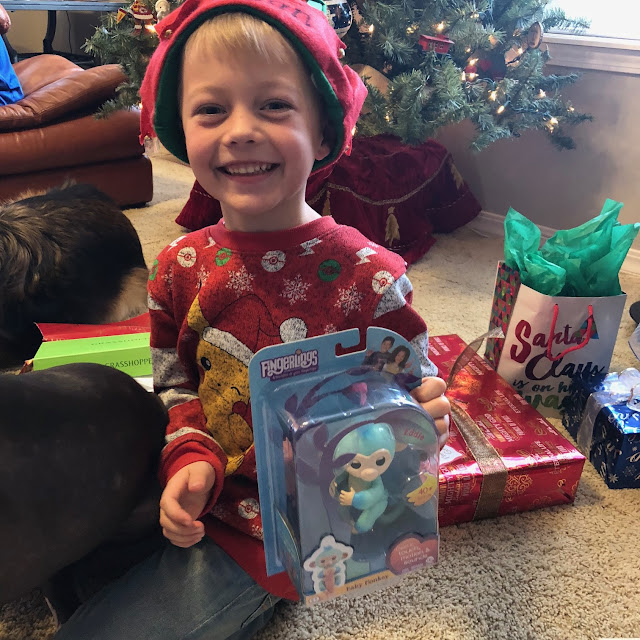 I had purchased a couple of these Fingerlings back in July for the boys thinking that not only would they be one of the BIG toys of the year but also thinkig that the boys would be asking for them but they NEVER did. I decided a few weeks before Christmas that I would offer them up to someone who couldn't find them and that had children with them on their wishlist--I found someone. Made their Christmas and their daughters Christmas. In the end. the boys ended up getting one from Grandma Sara and Papa Tom. Both were pretty excited to open them up to see what they would do. 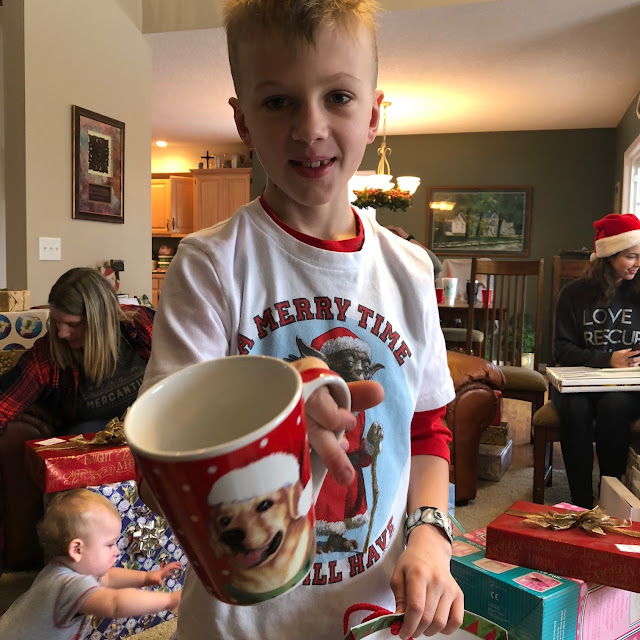 When my mom was in town a few weeks prior to Christmas the kids mentioned that they needed some new hot chocolate mugs since Kaden's had broken the year before. Mom made a mental note of it and ran into these cups one day at a random stop in at Big Lots -- where she never goes, really it was so random. When she saw these mugs with Brodi's mug on them, she knew the boys needed them & I couldn't have agreed more. We miss Gold Dog so much & loved all the little ways he made it known he was with us during the holidays. 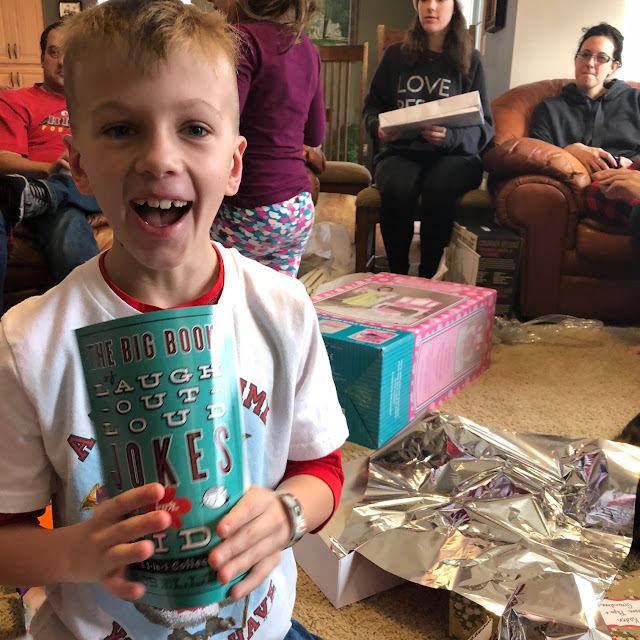 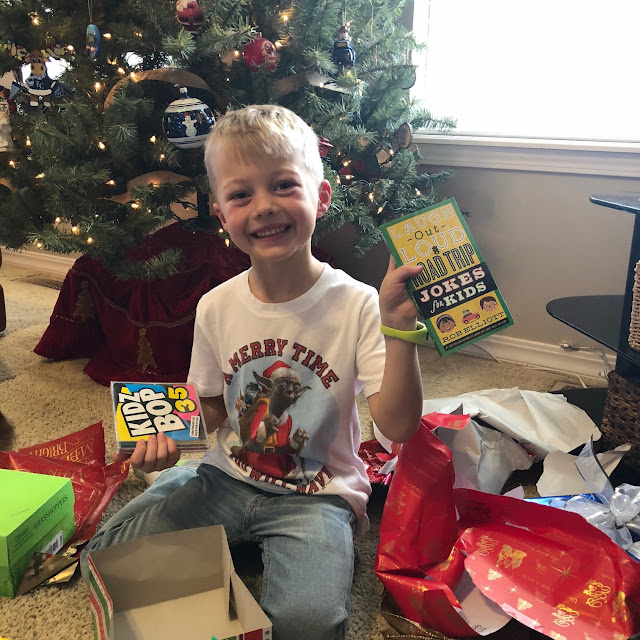 Joke Books--Kaden and Logan love joke books, they love jokes in general. Kaden was begging to order a joke book prior to Christmas and I kept putting him off because I knew exactly what they were getting from Papa Tom and Grandma Sara -- he was pretty stoked! 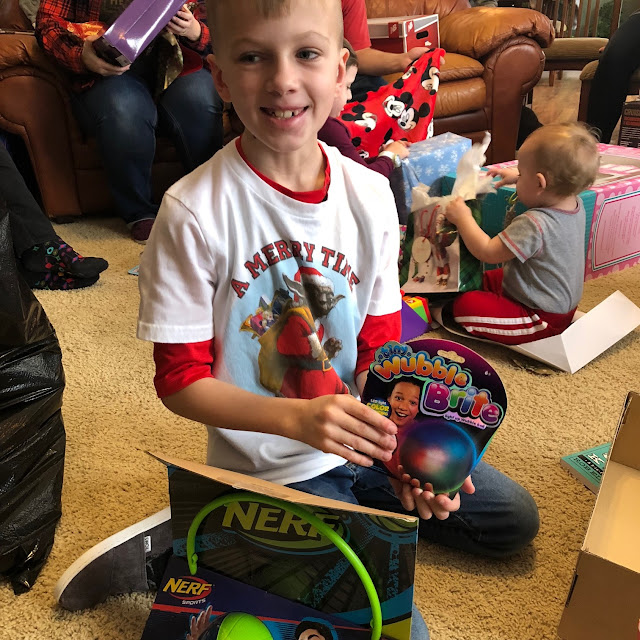 Sadly the above picture doesn't do this gift justice. So Kaden and Logan both created a wish list with sticky notes to share with the grandparents. They picked a few items under $25, a couple under $50, one under $100 and then a "gold" gift--which was reserved for Santa but when Kaden opened this particular box his hands went straight to the side of his head, his jaw dropped in excitement and he literally had to catch his breath. I love that a $7 and a $6 toy mean just as much, if not more, than some of the bigger and more expensive gifts he received.

The rest of our time there was spent around the kitchen table eating a delicious lunch -- including Grandma's famous meatballs, can't be a Christmas without them -- and watching the Chiefs play. Although we were able to spend a few more days than we typically do at my mom and dad's, it's still never enough and after the win we headed back to KC to prepare for Santa's arrival. 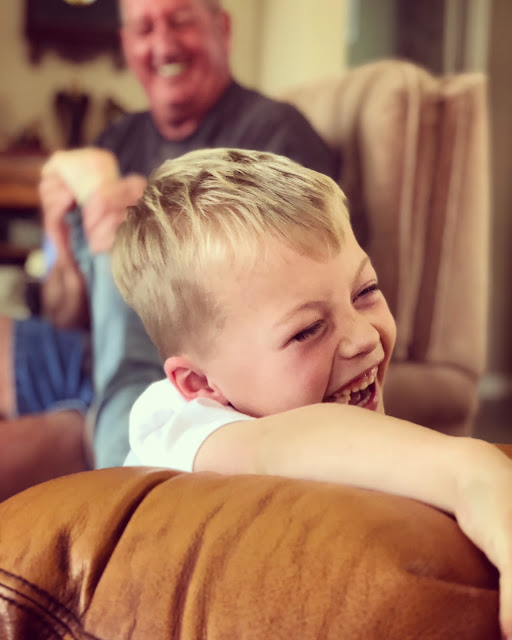 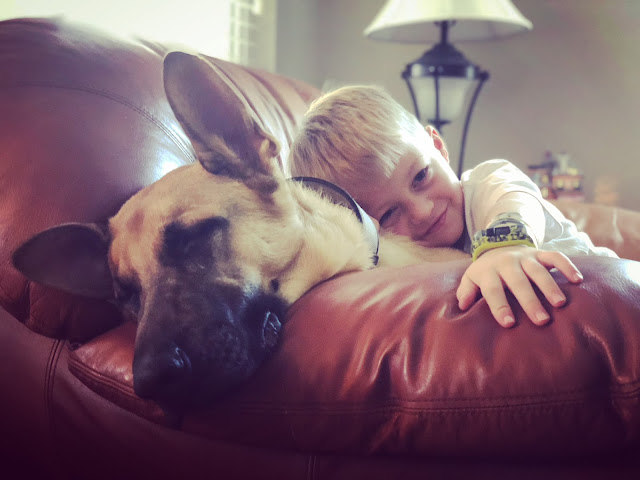 This guy though kept it real -- I won't lie, it wasn't unicorn and rainbows the whole time we were at my mom and dad's. There was frustration which led to disappointment in both Kaden and I and Papa Richard was there to remind me to smile. That we were blessed and life was too short to get to bent out of shape -- he's so right. A smile felt much better than the frustration that I was holding onto. Thanks for the reminder Papa. 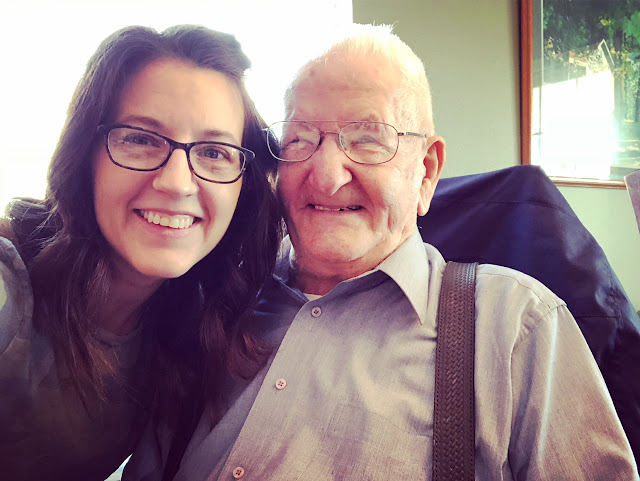