Having a dog will bless you with the happiest of days of your life, and one of the worst days. 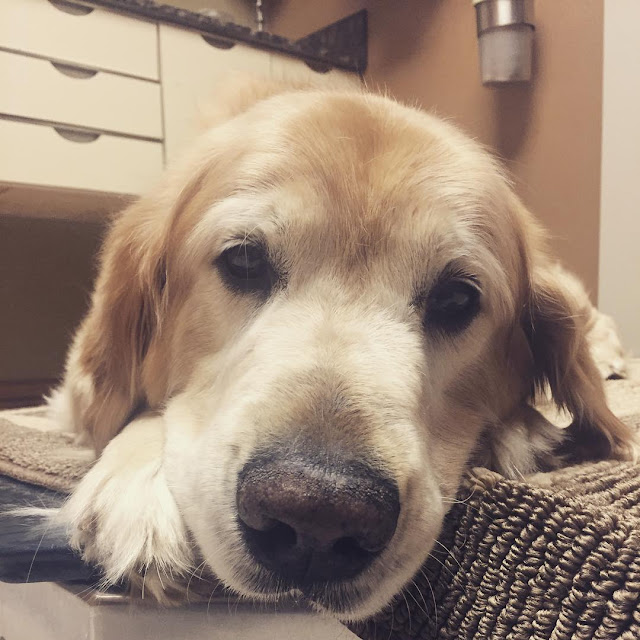 I read this & instantly put it into my phone. I knew the day would come where we would have to say our goodbyes to our fur babies. I just wasn't prepared for it to happen this quickly and so suddenly. 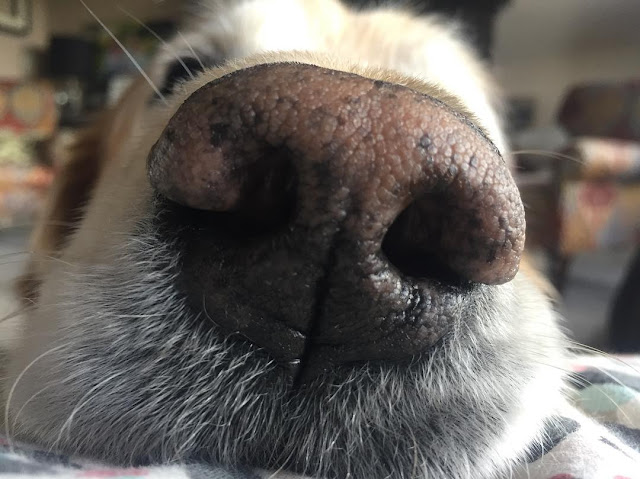 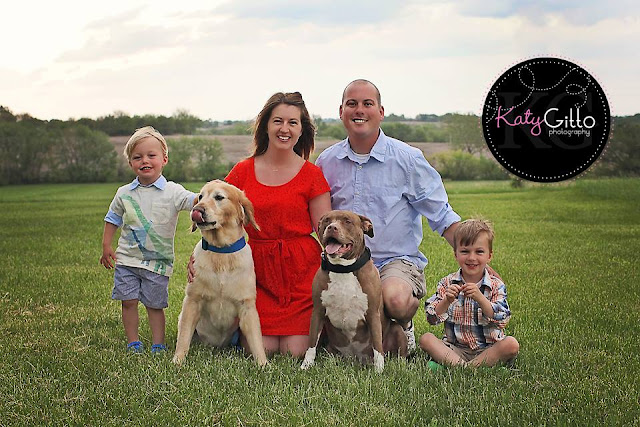 In August Brodi started losing control of his hind legs, almost overnight. We made an appointment with him at our vet and they thought it was arthritis setting in. We came home with a few medications that should help elevate his pain and hopefully help him gain control of his hind legs again. We gave it the three days they suggested but it didn't seem to be working so I started googling and asked for a followup. I had a feeling that it was something more, that it was a disease called degenerative myelopathy--a neurological disorder where a dog will lose control over his hind legs which will then lead to his bowels and his front legs. The diagnoses meant we had limited time with Brodi, maybe 4-6 months at most & as much we were hoping this wasn't the case, it was. So we would make the most of these last few months with Brodi--the good new, DM doesn't cause pain. It looks painful because his back legs aren't doing what they need to do but it isn't. So we placed rugs around the house and we helped him up the stairs at night. We made it work and he was a trooper.

On Friday he was his happy, normal self--or his new normal self. He greeted me at the door when I returned home from work.  He followed me around as I picked up the house & he climbed up on our bed as I fell asleep. Throughout the night he would climb up in our bed twice more--which we both commented on how that was unusual. Saturday morning started off pretty good too but quickly went downhill. We noticed that he climbed up on the couch, something he rarely does, especially if we are home. And he was leaning in a weird position against the couch. He sat there for awhile without moving. Justin lifted him up and moved him to the floor. He sat there again without moving. I called for him. He didn't come. I got a treat to entice him. He didn't come. I tried getting him to lie down. He didn't lie down. We knew something was wrong. Really wrong.

We told the boys that we needed to take him to the vet & that he was very sick and in pain. That he might not be coming home with us & gave them a chance to say their goodbyes too. We made arrangements for the boys to be with some friends while we were with Brodi. We called ahead to the vet & they had a room ready for us when we arrived. Instead of carrying him in, Brodi walked into the room. Justin and I looked at each other, maybe there was hope. And then once he was lying down, he didn't want to get back up. We asked to speak with a doctor. Brodi was in pain. DM isn't painful so there was more going on. We could try to give him medicine and see if that would help control the pain but there were no promises and the DM would only progress from here so we made the decision to set Brodi free from all his pain.

The next hour was the hardest thing that I have ever experienced. Here we were saying goodbye to our most loyal companion of the last 12 years. He was there before marriage. He was there before kids. The moment we walked through the door with Kaden and Logan he became an instant protector. He was a big, goofy dog but he was always so gentle with the boys. He would let them crawl on top of him, rid him like a horse. They pulled on his tail and yanked on his years but he never once snapped at them. He never once growled at them or us. He was literally the most lovable teddy bear I have ever met. & that's all he wanted to do, was give love. Justin could have been mad at me, the boys too but not Brodi. Brodi would be there to greet me at the door each and every time I walked through it. 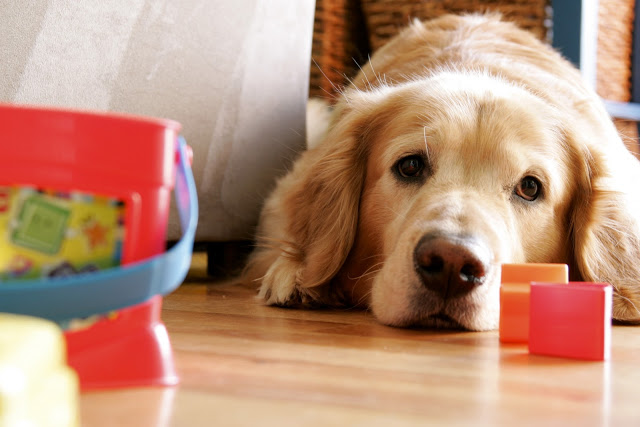 He'd lick the dirty water as I loaded the dish washer--I give him a look and shoo him back but he'd venture back over in a matter of seconds but he'd refrain from licking anymore, he just wanted to be close to the action. 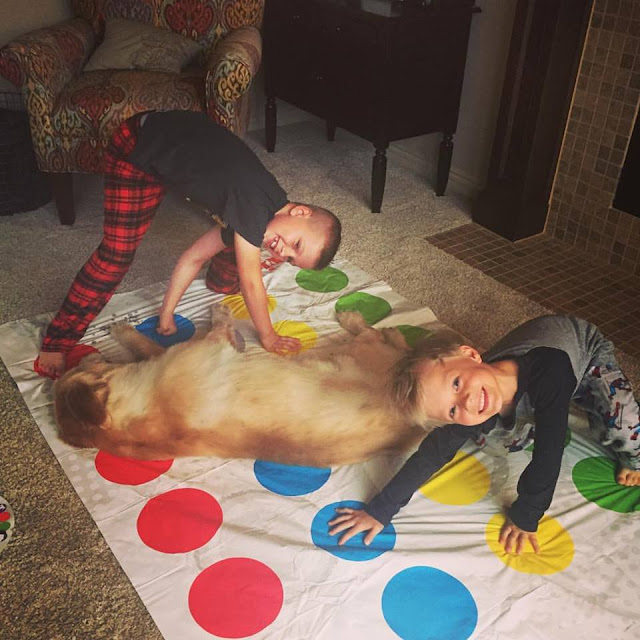 He never left anyone downstairs alone and would always trail whomever was the last the go up to bed, right on our heels. He'd crawl up into our bed every night and he laid there and wait until he thought we were asleep and he jump down and head to his nightly spot. And he never got up before we did, he would always wait until we were up before he started to stir--unless nature was calling.

When dinner time came, he knew exactly where he'd get lucky. 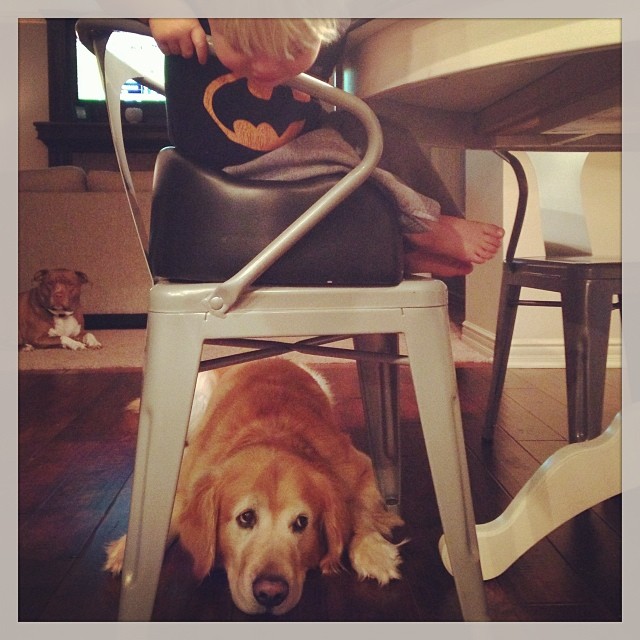 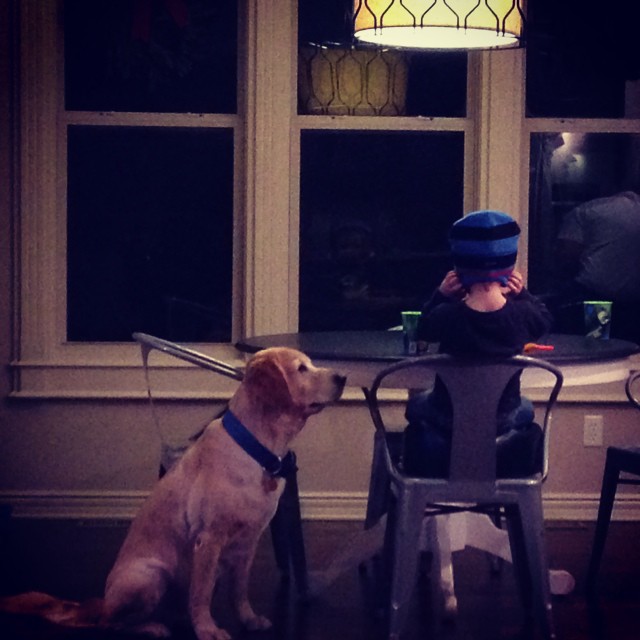 He would alert us if someone was at the door or a deer was in the backyard. He could sit there forever and watch the deer run. 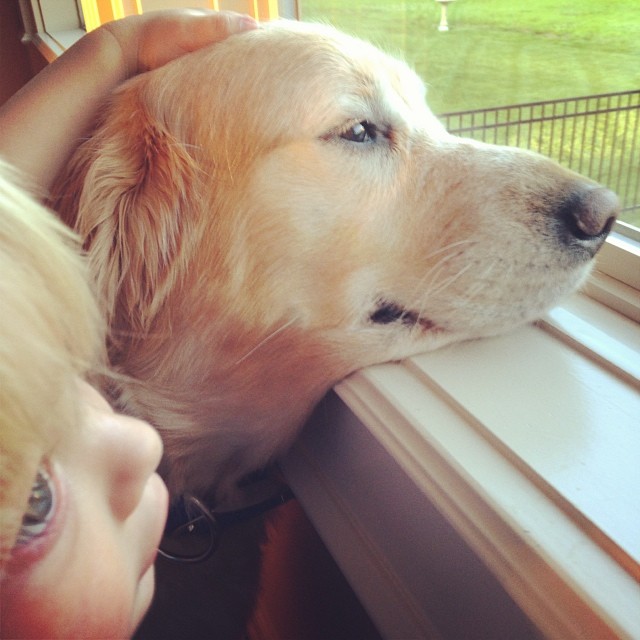 He and Stoli were the best of friends. 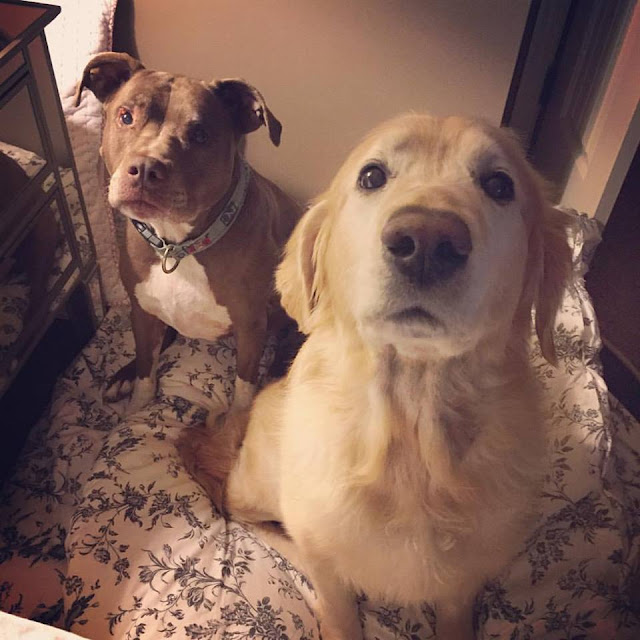 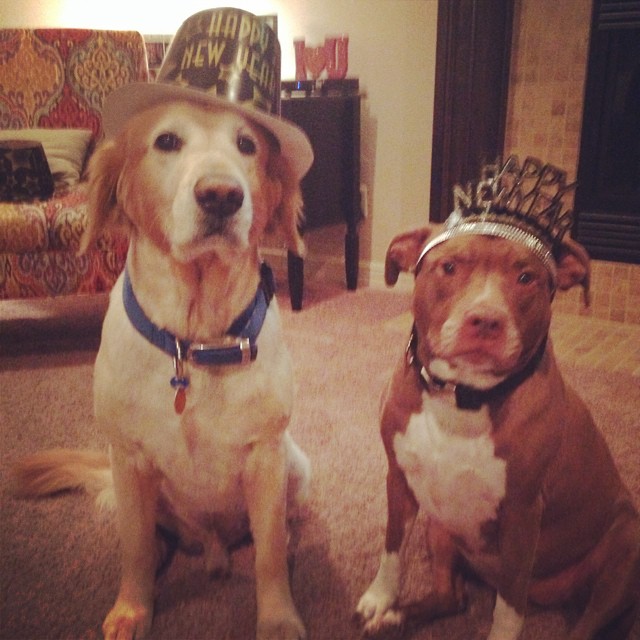 He loved the snow. I mean-catching snowballs, face in the snow searching for said snowball-loved the snow. Oh, how I wish he would have gotten to enjoy just one more snow. 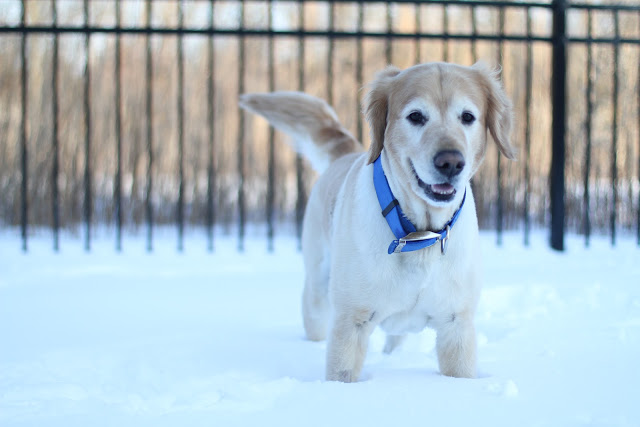 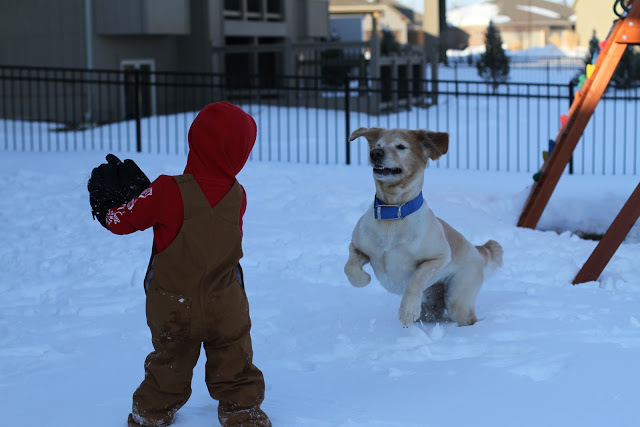 & as much as he loved the snow, he hated the heat and would choose the cool hardwood floors over going outside every time. 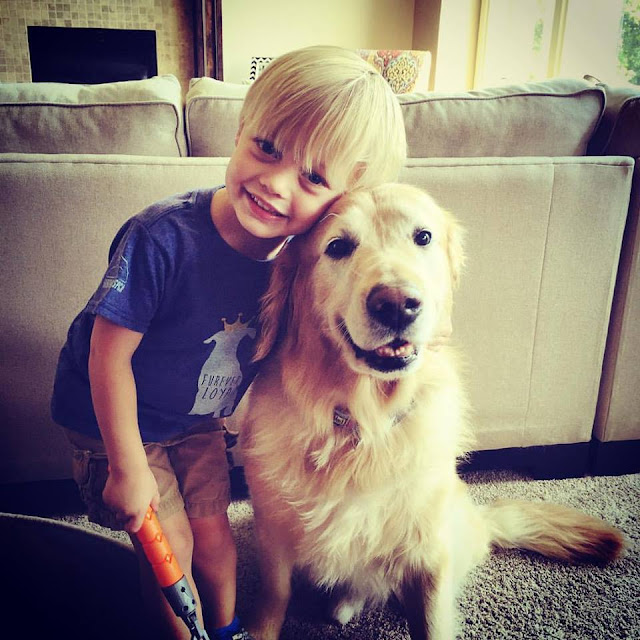 He loved waiting at the bus stop for the kids just as much as I did. It was certainly a treat for both of us. 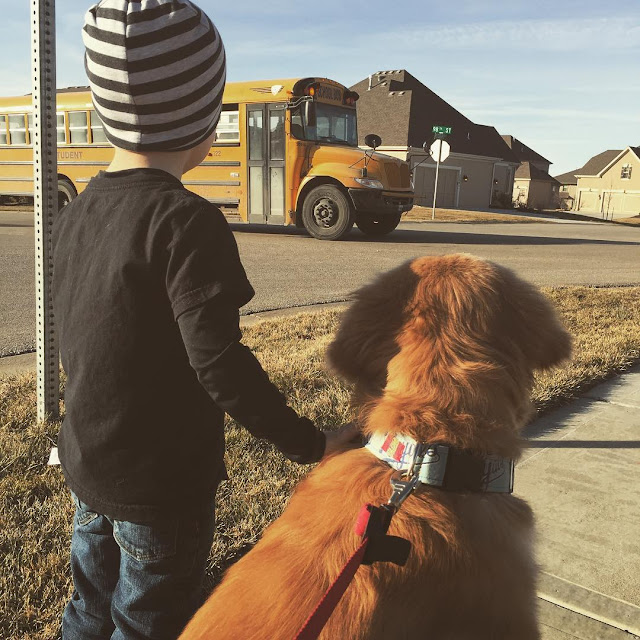 His favorite spot to lay during the holidays was right in front of the Christmas tree. 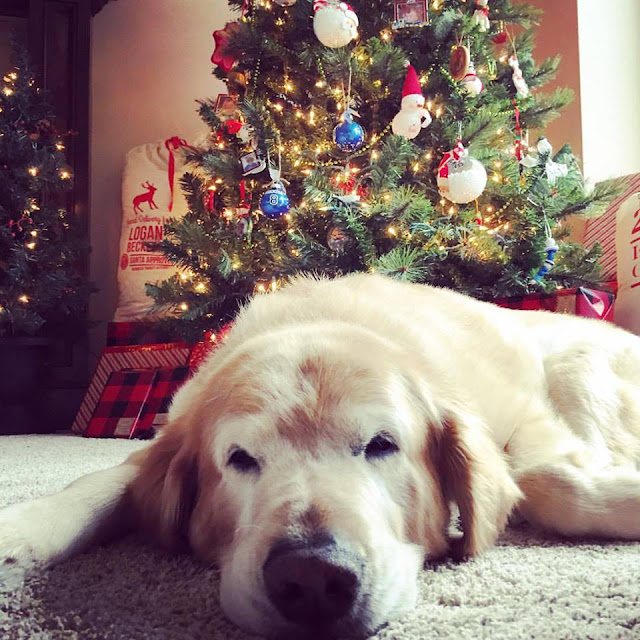 He'd humor us as we put costumes on him. 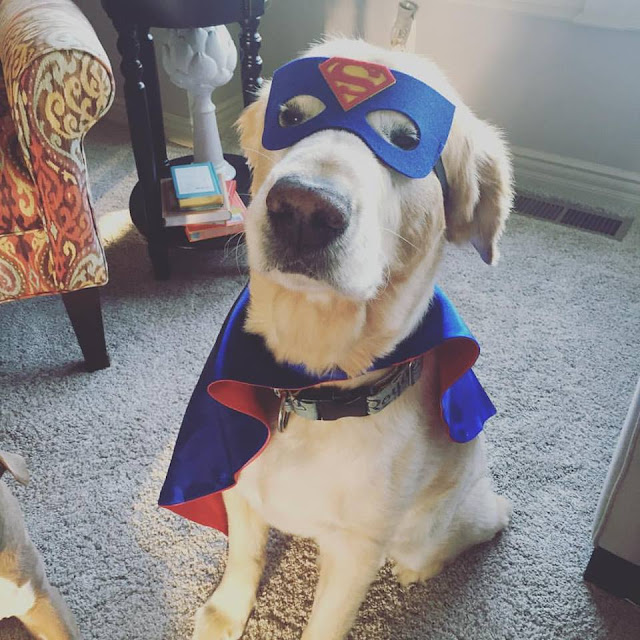 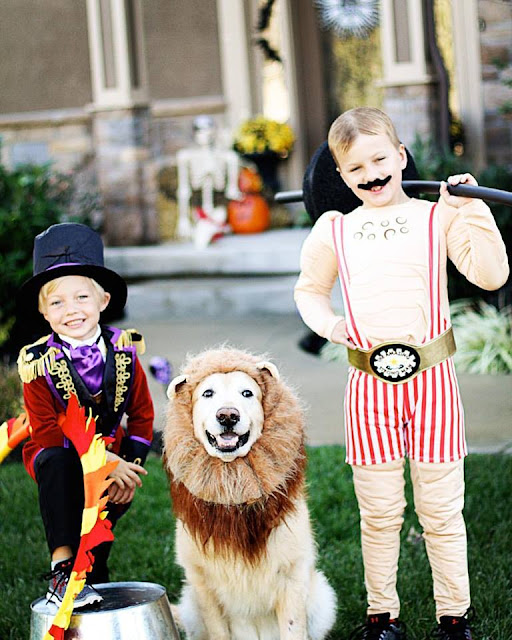 He'd play along as the kids "cracked eggs" on top of his head. 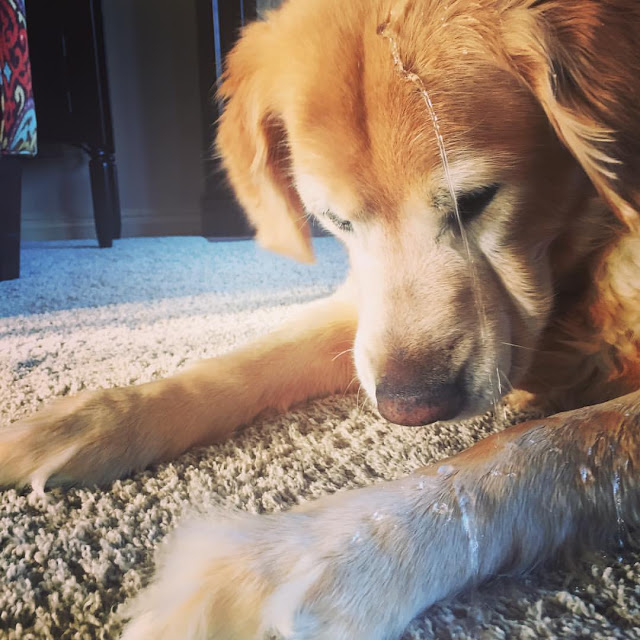 His little paws would crimp when they got wet. 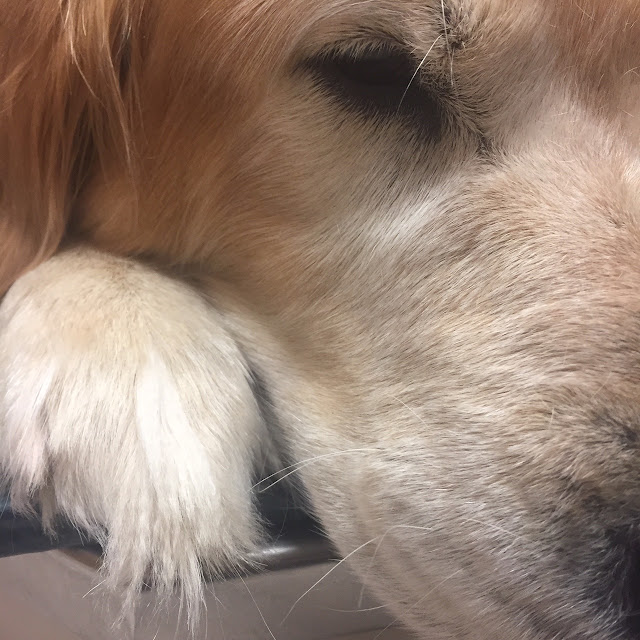 Speaking of hair, he had it for days. It was a full time job trying to keep the floors cleared of his dog hair and eventually he would win the battle every time. Finally we got him shaved. We thought win, win--win for us when it came to controlling his hair and a win for him because he was cooler and more comfortable. But that first haircut brought a little shock to us all, I'm pretty sure he didn't want to be seen so he laid low until his hair grew out a little more. One time they even gave him bows... 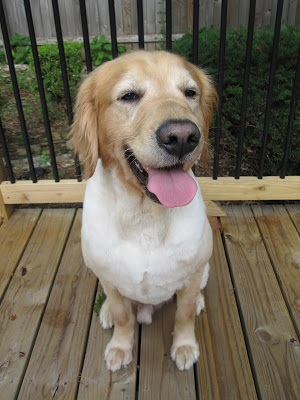 He chewed up every. single. pillow. I bought for the couch.

Chewed through zippers on jeans.

Destroyed more toys than we can count.

Ate through & scratched the shit out of multiple doors.

Was a pretty high maintenance dog--he had an ear hematoma which led to surgery. He got more ear infections than I could count. And even more hot spots than ear infections. & then there is the DM that snuck up on us these last few months. 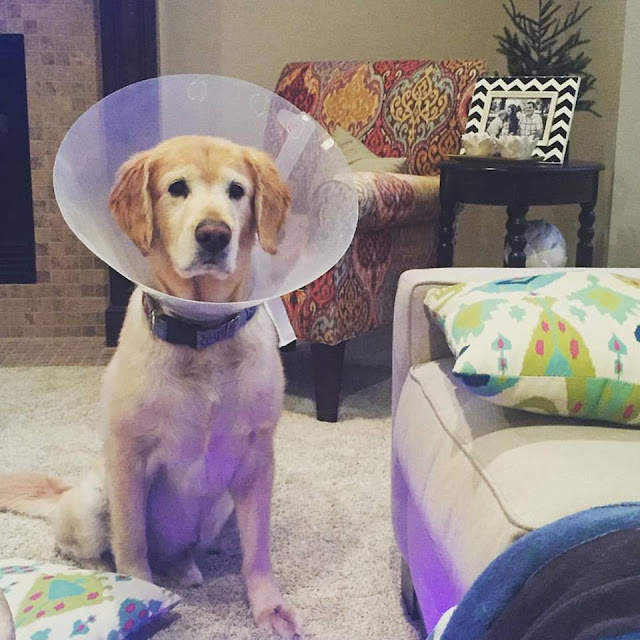 But all of this, every single thing, was worth it. What I wouldn't give to have him chew up another pillow or destroy another door. These things made him, him. He made our house a home. He never held a grudge. He never would turn attention down and he always knew when you need a little extra love and would nuzzle his little, well big, way into your lap. He'd nap with you. He'd lay right at your feet as you edited pictures or wrote a new blog post and let you gently rest your foot on his back.

Brodi wasn't just any dog. He was our dog. He was as much of a part of our family as anyone else and we wouldn't be the same without him. He brought energy and excitement to our days-made the cloudy days bright again. Made me smile in times when I found it hard to. He was and will always be a reminder of what unconditional love truly is and we will forever be grateful that we were the recipients of his love. 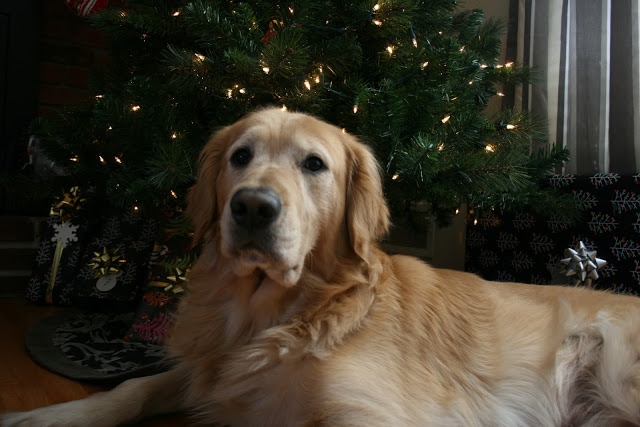 Twelve years and 3 months ago we decided to add another fur baby to our family of three. Justin found this little golden retriever in the Kansas City Star. We made a call, met with the family and we knew he needed to be ours. We needed him. It was love at first sight and every day since. 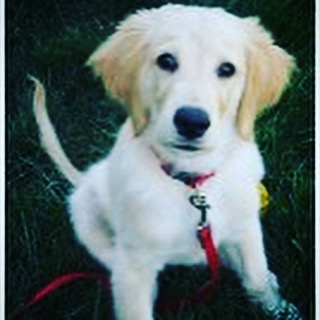 We will forever love you Brodi and we will miss you so fiercely. Thank you. 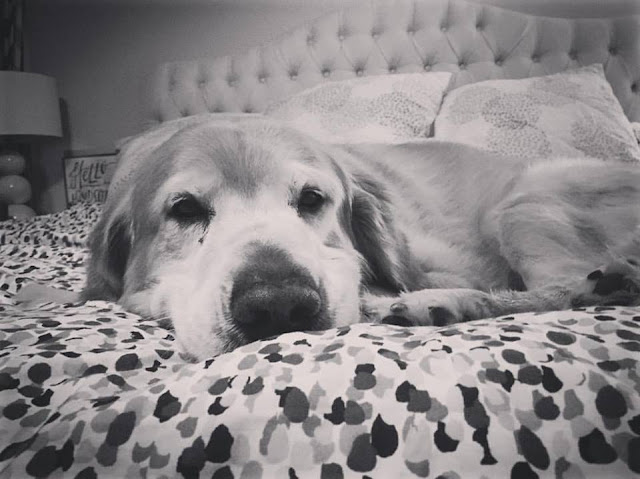 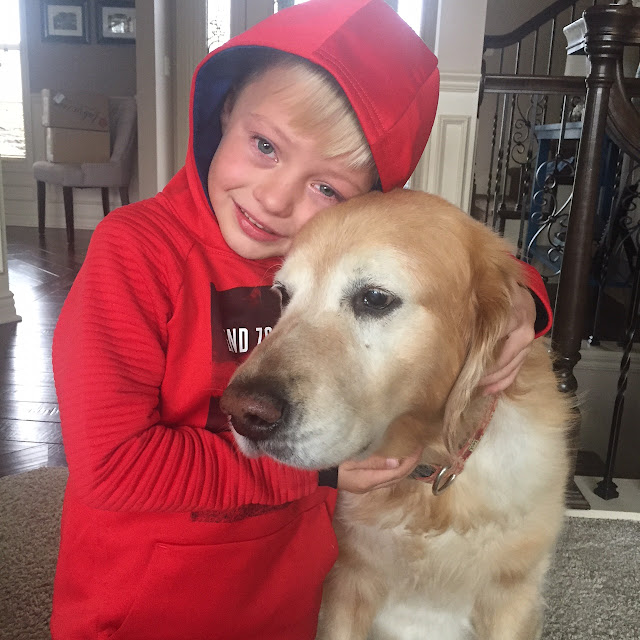 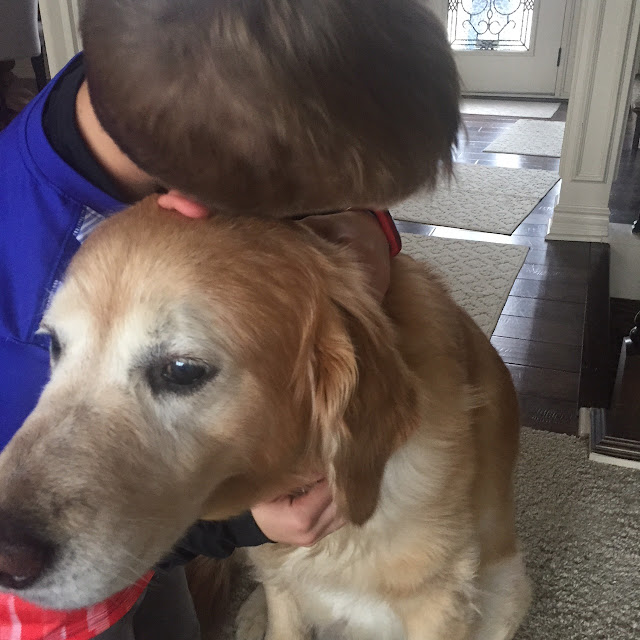 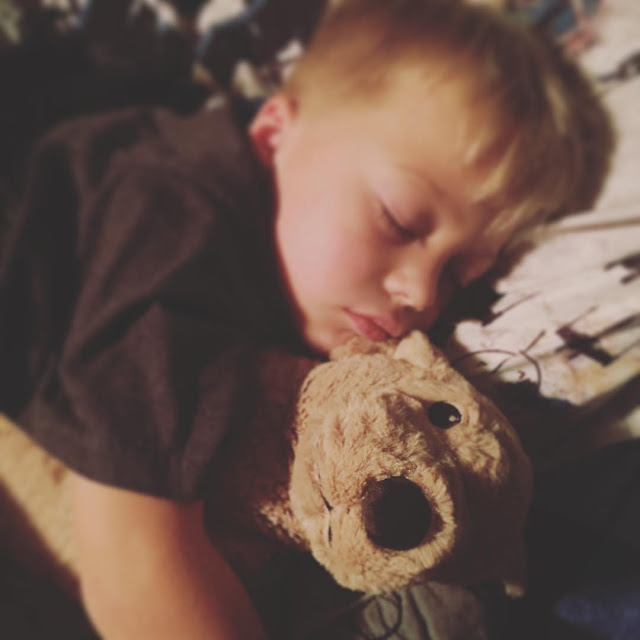