It was that time of year again--PittState Homecoming.

& we were headed back but this time we had another family meeting us there. It just so happens that Logan's best buddy in school, Little C, well, his dad is from Arma (which I played against when in high school) & attended PittState too. It was brought up one day in conversation and that was that. PittState Homecoming with the Cleland Crew. 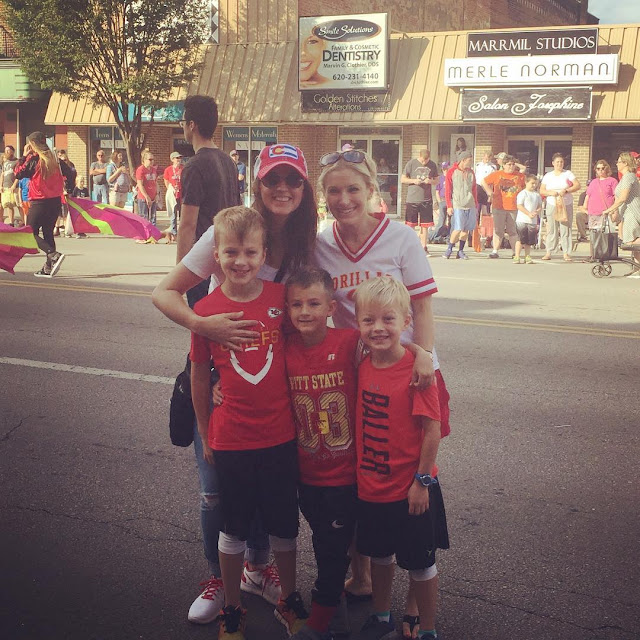 The Clelands took of Friday for Arma to avoid waking up super early but since my mom had taken the boys back to Carthage, Justin and I only had to worry about getting us around which was pretty easy. We met my mom and dad at Walmart to grab the kids & off to the parade we went. And since we were with locals--they knew exactly the place to hang out and watch the parade, right near the judging table because each band was on point. & once again we saw the Jasper Marching Eagles--they may have been small in numbers but their sound sure was mighty. 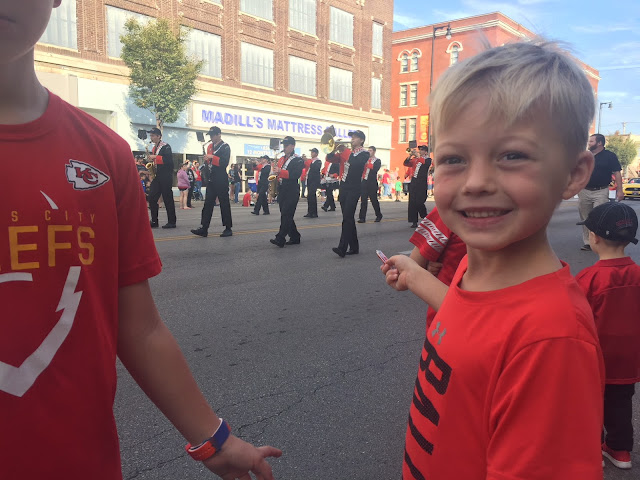 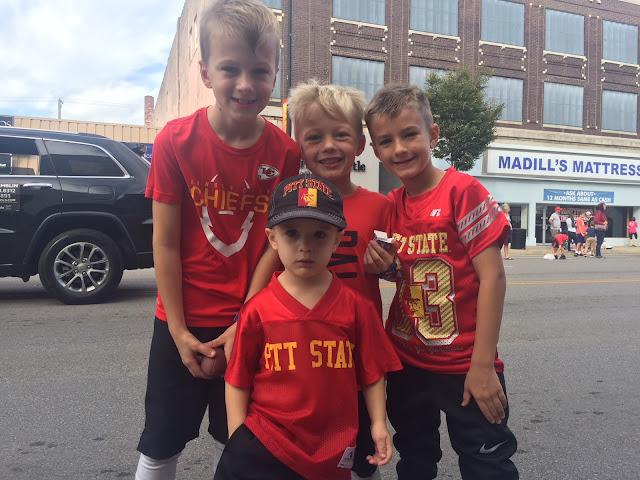 The boys were not disappointed when it came to their candy haul either. (I, on the other hand, am pretty sure it will be used for Halloween Candy come later this month.

After the parade was over we had a little time to waste before the pep rally started so we headed to Mall Deli. I mean, when in Pittsburg, you hit the Mall Deli up at least once and even though we were in that exact spot only a year early, neither of the boys could remember it. That is until the dressing and crackers were brought to the table. LIGHT BULB! 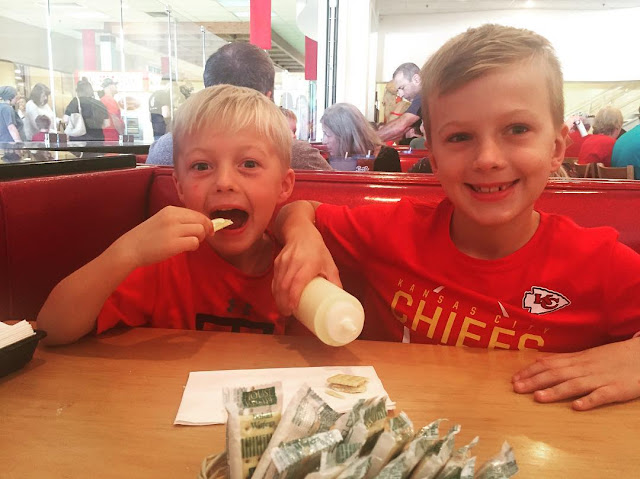 After we got our fix in we headed back to the stadium. Last year we didn't actually go into the game, this year we were. As we walked up to Gorilla Village we saw both the men's and women's basketball teams signing team posters & Justin saw Kim Anderson, the new head men's basketball coach for PittState who coached last year at MU. Justin's two worlds colliding. We approached Kim for a picture with the boys, explained that although we attended Pitt, we were huge MU fans and Justin's aunt and uncle live in Roche Port. Justin no more than got Barbara out of his mouth and Coach Anderson was already talking about her and Charlie. We talked for a few minutes there with him and then wished him luck and headed off to the pep rally lines. Justin's day was made. 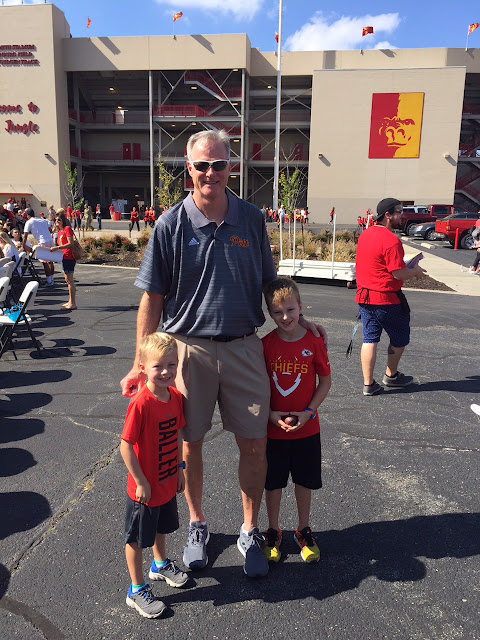 We watched as the band led in the players, who were decked out in their grey uniforms, through Gorilla Village and just as we were about to head to the bounce houses we noticed another line forming--we were in the perfect spot to take in the pep rally & watch the cheerleaders soar. Both boys were pretty impressed at the strength the guys showed. 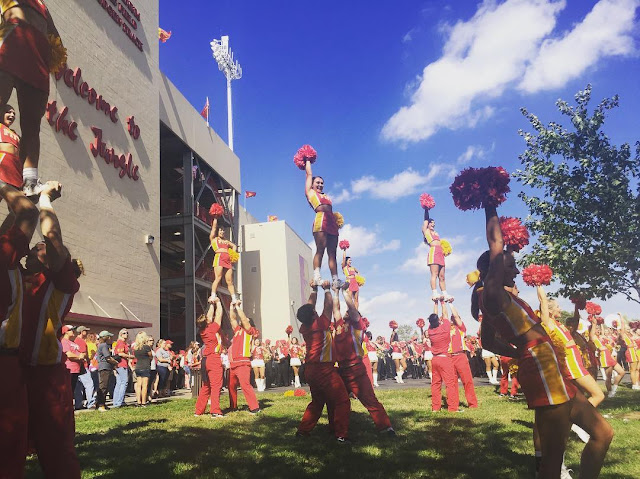 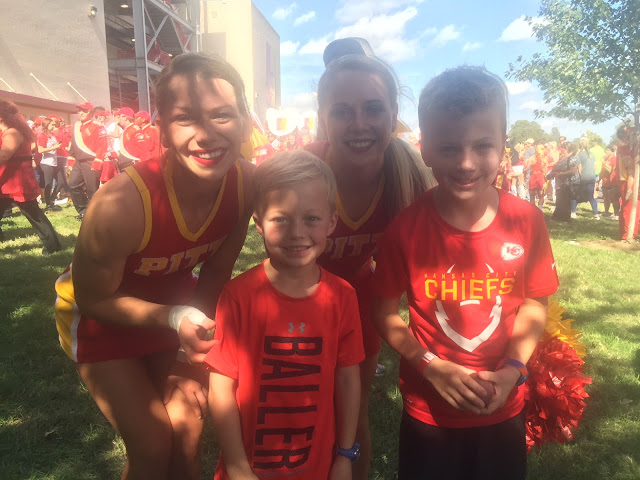 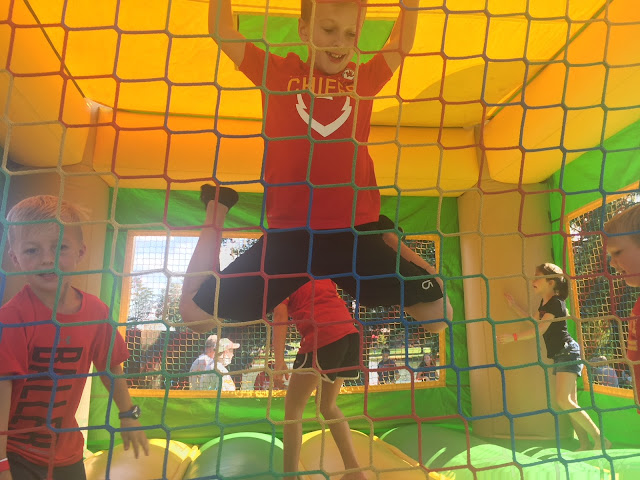 They finally got to check out the bounce houses & we met back up with the Clelands before heading into the stadium to find out seats for the game. The boys shouted the National Anthem & were on their feet for the entire first half of the game. FIRST DOWN PITTSTATE. 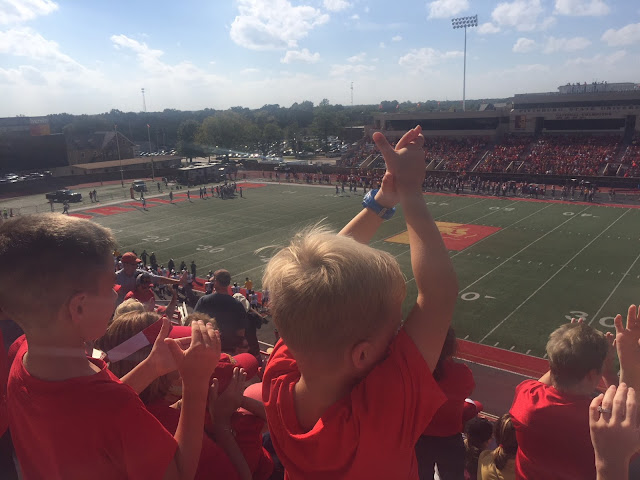 And could these two be any cuter? I love the friendship they are building & can only pray that it is one that lasts for many, many years to come. 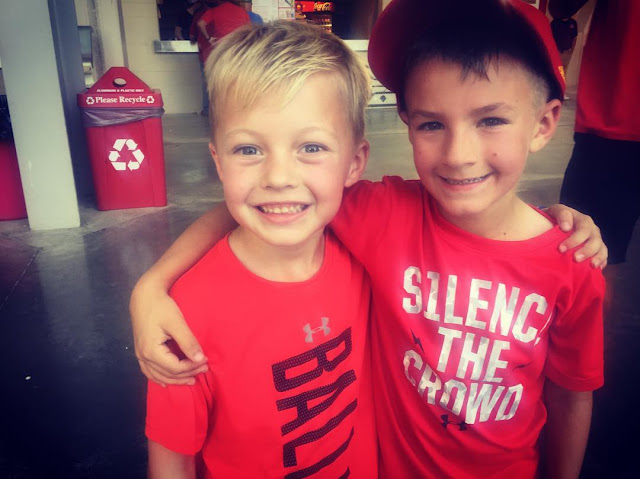 Speaking of friendships--his mom is pretty sweet too. The whole Cleland family is and it's amazing how God knows just how to perfectly sprinkle new friendships throughout your life. I have a feeling that with our boys being besties, playing ball together and living only blocks away--that the Clelands and Souths are going to become quite familiar with one another! 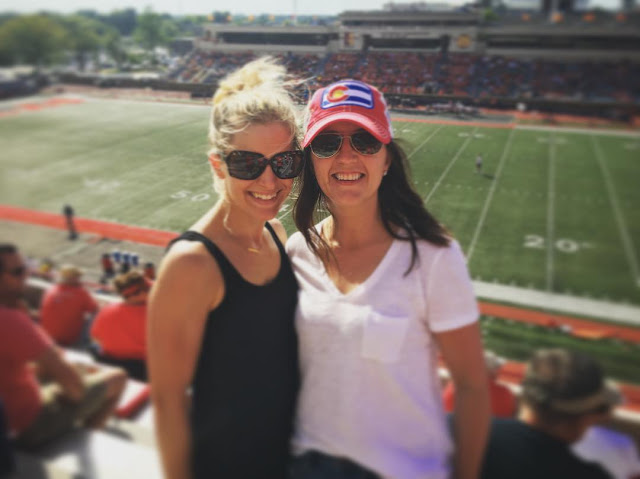 We made it through the halftime show but shortly after we said our goodbyes and headed north to Kansas City--we had a couple dogs that we couldn't be gone from too long or else they'd let us know about it. Can you say, chewed up pillows? But what a wonderful Saturday spent with friends and our kiddos in our old stomping ground. There's something kind of neat about taking your kids back, showing them around and wondering if this might be there home one day too. 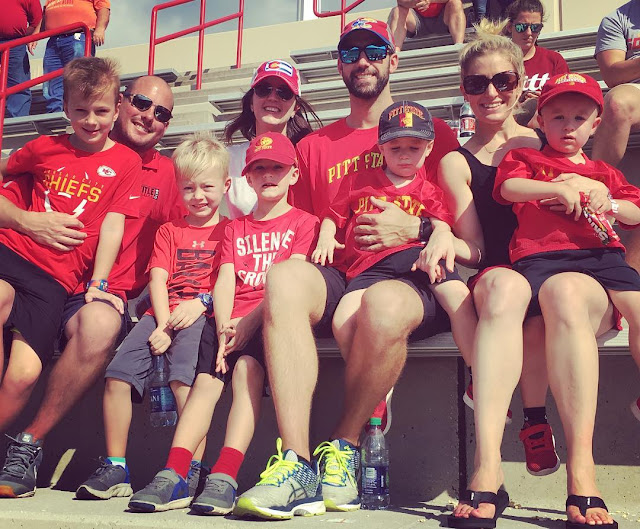