Gone are the days of full on themed birthday parties. I won't lie, part of me misses planning all the little details and searching for the perfect items to include in the celebration but I've come to realize that even though I was doing it for the boys, they didn't really care. The only thing that mattered to them was that they were surrounded by their friends doing something they loved and had a cake with candles to blow out. So, the last few years we have switched gears--we done a bowling party, Top Golf party, 2 Sky Zone parties & now we have added a baseball party.

From the moment I knew we were having a baseball party I started looking for a shirt for Kaden. His favorite player is Cain, just like his mom, but he is a big fan of Moustakas too & well, he's #8 so it only made sense. You would think this would have been an easy task as there are a TON of Moose shirts but  not a lot with an 8 on the front and that was in Kaden's size. It tested my Googling skills but when I finally ran across this one, I added it to my cart & called it good. 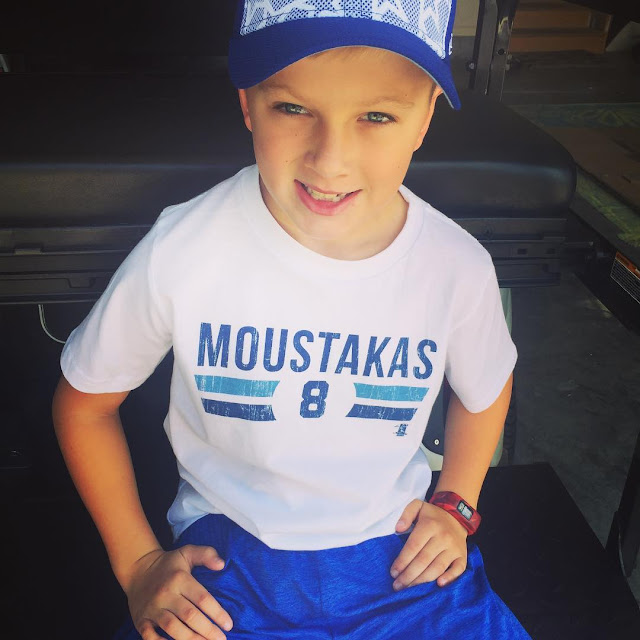 Kaden loves baseball. Unless it's early in the morning or late in the evening and he's wanting to complain about something... He loves playing it & he loves the Royals. He honestly knows just as many players names & positions as I do. So when I suggested a party at DBats -- our favorite batting cages in KC, it's indoors & so much more than just cages -- he was all for it. A quick call to DBats and it was booked. They had a party room where we could enjoy some cake and presents & then when we weren't in the party room, which was a majority of the time, an instructor that would play games with the boys. They started the party off with a game of wiffle ball--Blue Crew vs. Birthday Boys. The thing that I liked most of all, the instructor made them listen, if they didn't listen to the rules and play the right way, then they had to do push-ups. They were all ears & the instructor was AMAZING with the boys.

Since we were doing a baseball theme it only made sense to have Big League Chew, Cracker Jacks and Sunflower Seeds as part of the treats. We also ordered a few cookies from Icings By Ang, another local favorite & cookies that Logan actually likes---huge win & then I made the cake. The cake has become somewhat of a tradition for us now. It kind of all started on Kaden's 5th birthday and every birthday since then for him and Logan, I make at least one of their cakes. Most of the time it is used at their parties but occasionally it will just be used at home--time constraints. This year I had very little time to prep for the party, let alone the cake. We had just returned from Whistler two days earlier, really 36 hours and I had to work a full 8 hours on Friday and we had baseball on Saturday morning followed by a birthday party for Logan to attend. Thankfully, Justin took the boys to a friend's birthday party on Friday night so I could go to work in the kitchen. I planned on keeping it simple, two round cakes on top of one another and then iced---needed a little blue, gold, red and white icing. This time I only started over once with the gold icing---it wasn't centered on the cake. & then there are the baseball stitches--UGH. At least it was made with 100% love and Kaden couldn't have been happier with it. 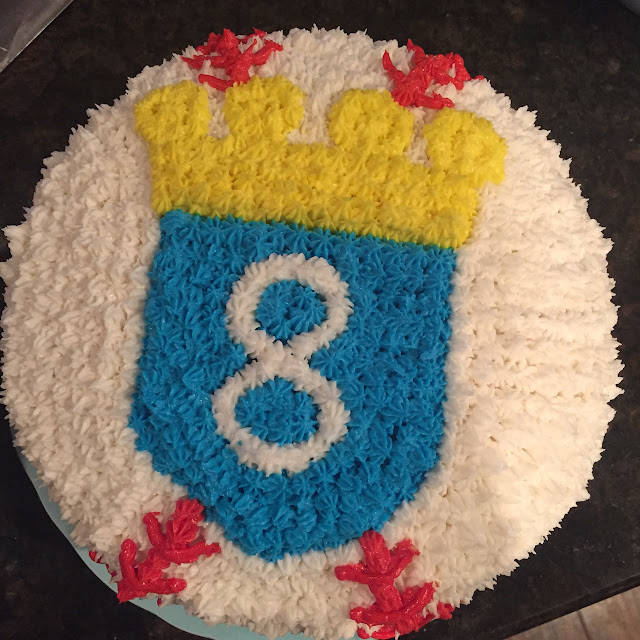 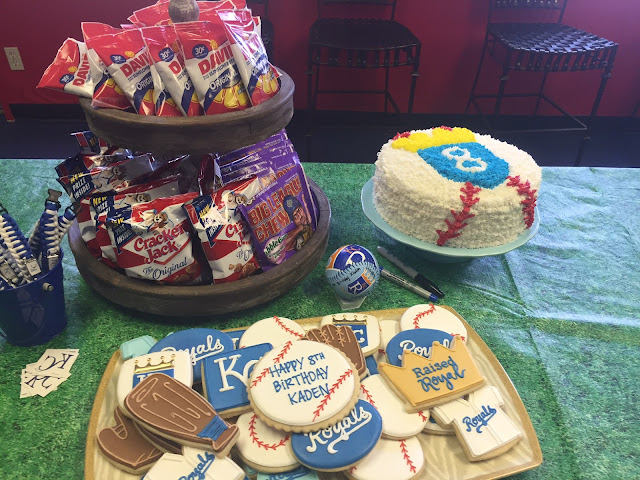 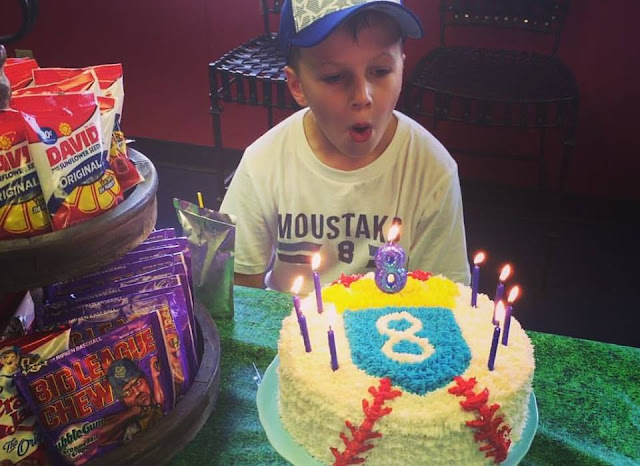 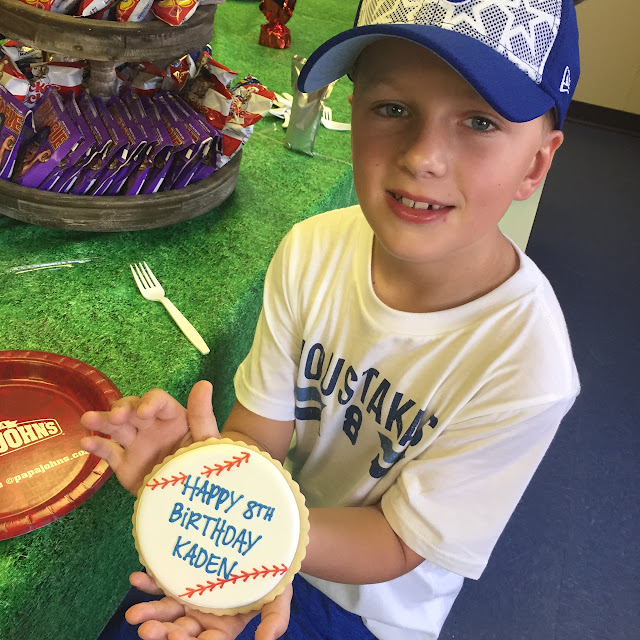 I also bought a Royals baseball for all his friends to sign and Kaden gave them a Royals powercord wristband as his party favor. & then it was time for presents -- he got socks and was super stoked about them. He also got some baseball cards which are a first for him and he's super excited to put them into a binder and go through them with his dad just like Papa Dave did with Justin. Cousin Colton gave him a Pogo Stick which is a huge hit but frustrating at the same time since it take practice to get better. His friends were all excited to watch him open their gift and Kaden was equally excited to see what they had picked out for him. 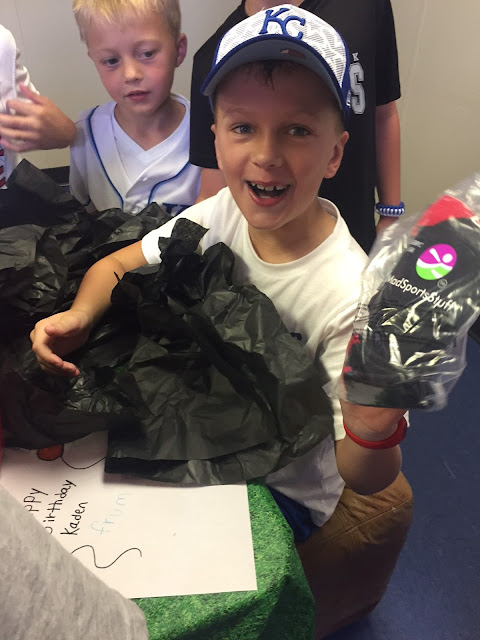 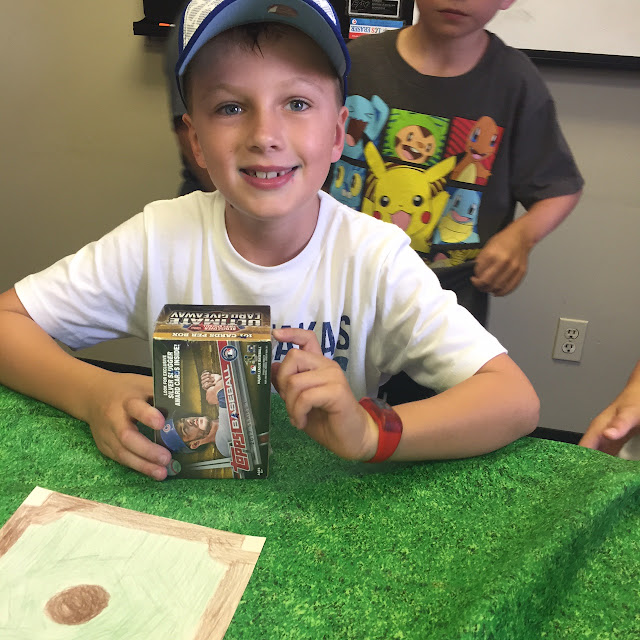 After the boys were all hyped up on sugar we sent them back down to play a few more games with the instructor. They played kickball and had relay races. Losers had to either do push ups, burpees, or wall sits. & let me tell you, after the two hours of running, jumping and competing these boys were a sweaty mess. Sweaty but smiling from ear to ear. 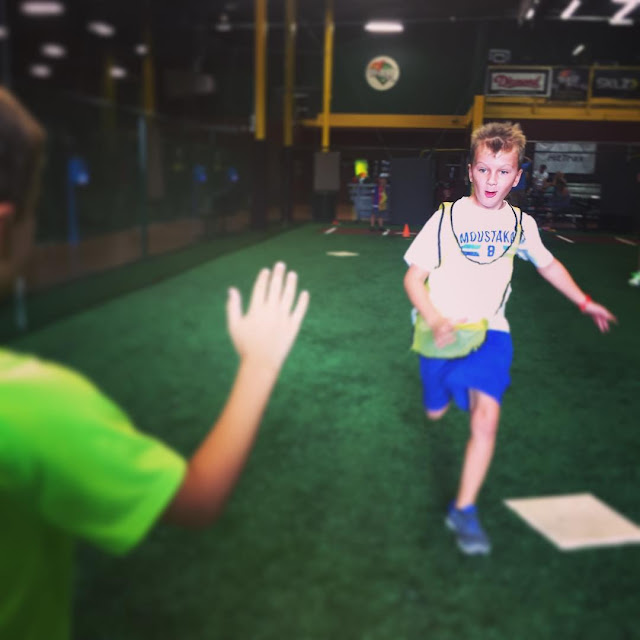 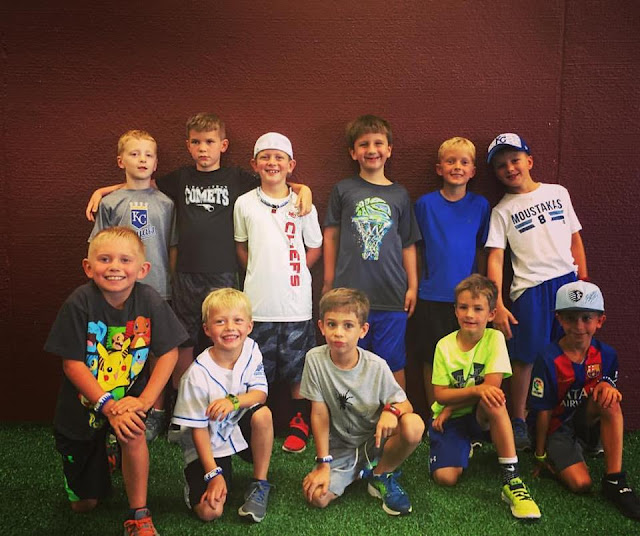 What a fun birthday party.
Happiest of birthday celebrations my little love. May you always be surrounded by so many wonderful friends throughout your life. 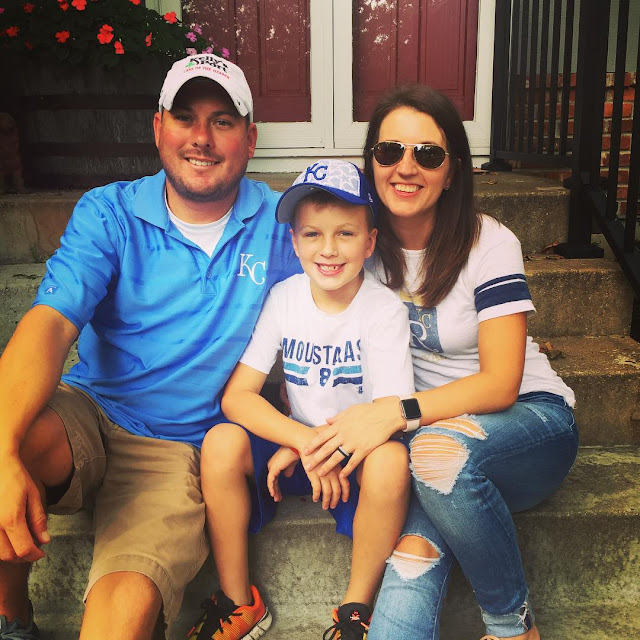