We moved into our home about 5 years ago. We weren't the first in the neighborhood but we certainly were one of the early arrivals. After moving in we saw home after home going up. The bus stops started to grow a little more with kids, a few additional stops were added & the pool became the spot to be on the weekend. It was wonderful seeing so many families move into the neighborhood but it was also hard to really get to know anyone at the same time.

Thankfully we have met some wonderful people who we have really become great friends with & she was feeling the same way so we decided to take it into our own hands and plan a little gathering.

We called it---Red, White and BBQ.

It would consist of a children's parade which would start on one side of the neighborhood and finish on the other and then followed by a street BBQ. We printed cute little invitations to hand out to each house in the neighborhood and requested that neighbors bring a side dish or dessert to share & we would take care of the burgers and dogs. And by we, Justin would.

We were hoping for 50 people. We got 120!! Over 40 homes from the neighborhood RSVP'd on a holiday weekend, we were so pumped with the turnout. Now it came down to the execution....& of course I didn't think the whole bike decorating thing through. It took way more time than I thought it would and when I was finished with the first, I did not even want to look at the 2nd bike. But that wouldn't have been fair & I would have had one sad boy on my hand so I got 'er done. 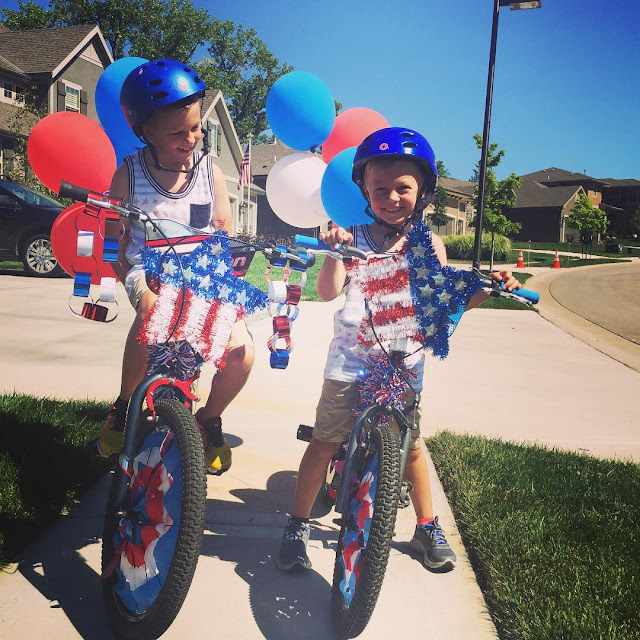 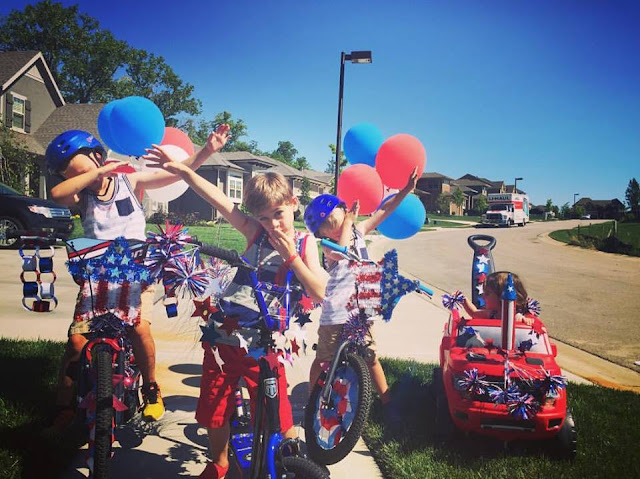 We weren't sure how many kiddos would show up to the parade & we were a little worried their bikes or scooters wouldn't be decorated but once again, we were presently surprised. We had about 25 kids & every. single. bike. was decorated. I even noticed on a friend's fb post that someone commented on how they hadn't seen this done in years and just loved that our neighborhood did it. Now, I know we aren't the only neighborhood that does this but it's still nice knowing that people moved to our neighborhood to belong to a community and although it took a few years to get there, we're finally getting it. 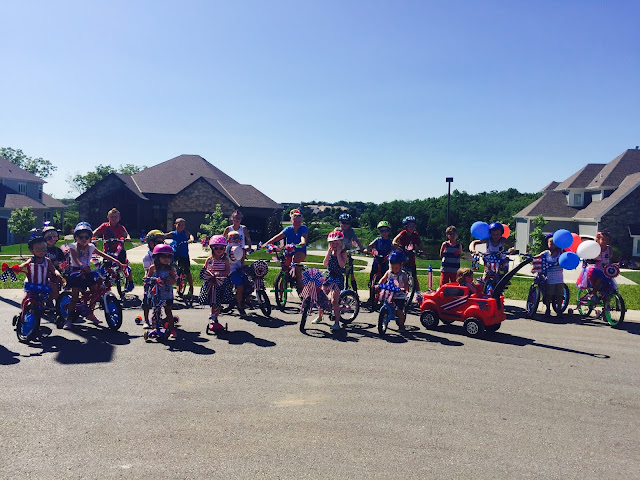 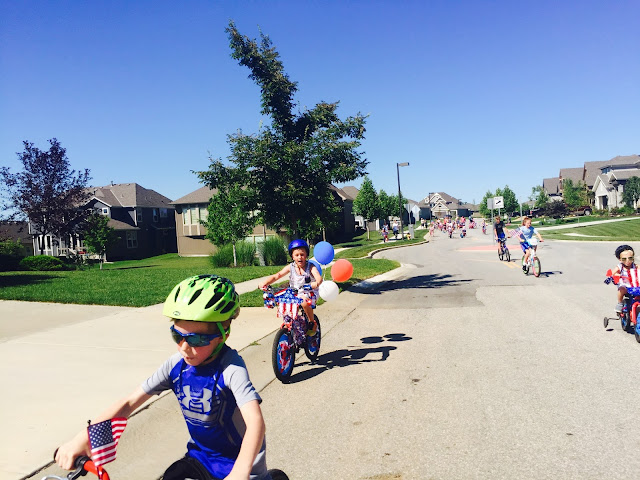 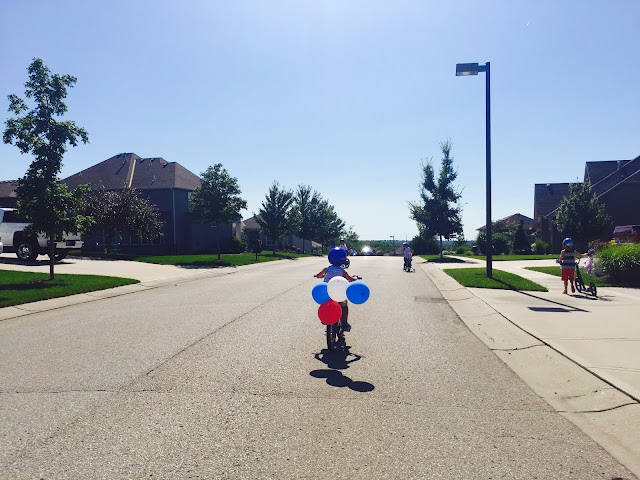 & let me just say, those big kids were moving on their bikes--we may have to figure out a way in which we can keep all the kids together so it looks more like a parade and less like a free for all--ha!

The parade ended at our cul-de-sac where the street BBQ was taking place. I had cleared it with all of my neighbors before sending out the invite and everyone was on board with the idea so we just sat our chairs down and blocked the street. The only vehicle that would need to get through would be the mailman but we were okay waiting until Monday for those bills.

Although the weather was gorgeous, it was HOT and since we live in a newer subdivision there aren't many trees to provide shade & everyone was melting. Thankfully a few dads left and came back with a couple pop up tents which provided some much needed relief. 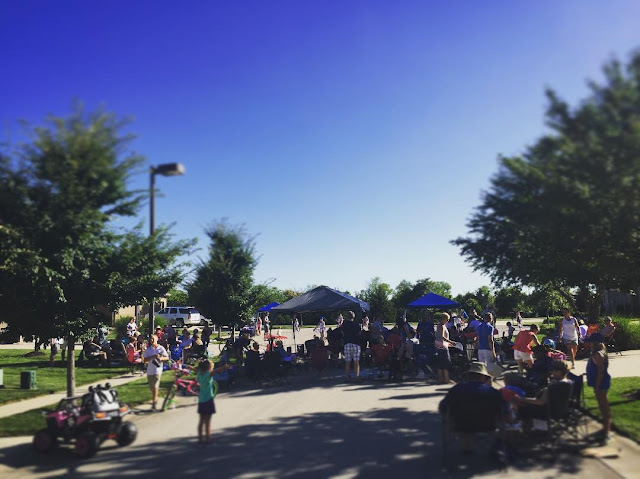 We had bubbles, tattoos, sidewalk chalk and glow sticks to entertain the kids. We have drinks to entertain the adults. For the next 4 hours or so everyone just mingled & put names to faces. Yard games were pulled out. Tag and hide and seek were played. Bomb Pops were had. And even though the heat was something fierce that day since there was no wind, everyone was smiling, relaxing and having a great time.

& clean up was super easy--easier than any party I have thrown. We had cardboard boxes with trashcans stationed around the street & whatever the neighbors brought to share, they took home with them or we chucked it in the trash. & since we said no fireworks--city of Lenexa doesn't allow anyways--we didn't have a ton of trash on the ground either. Plus tons of neighbors stayed and asked how they could help,we really do live in a great community.

I won't lie, when we first came up with this idea, I was a little intimidated but thanks to my dear friend, Jenn, a few other ladies, & Justin manning the grill, we pulled it off & a 2nd annual Red, White and BBQ has already been requested by so many neighbors.

When we moved into this neighborhood we were praying for a good mix of young families and older couples & we couldn't be more blessed with how the neighborhood has filled in. Our street is filled with empty nesters who just adore the boys and on the other side of the neighborhood--loads of kids and the majority are under the age of 10 which means fun for the boys and maybe a few new friends for mom and dad too. 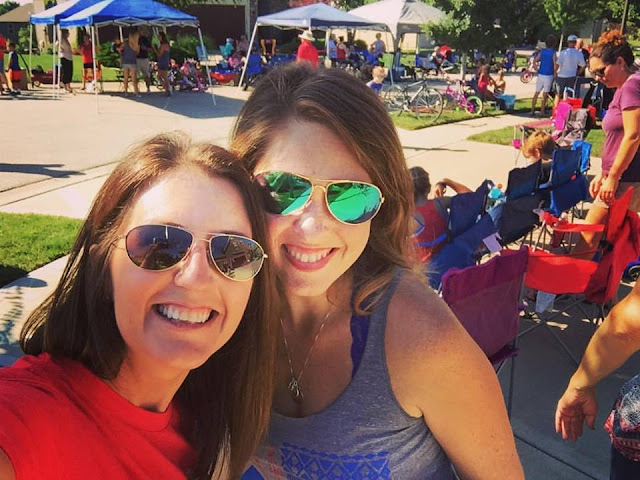