Believe it or not, we have never taken the boys to Worlds of Fun. I know, right?!? It isn't like we were trying to avoid it, we just don't ever think about it. That all changed the Walshes asked if they could take Logan for his birthday and instead of just sending Logan, we turned it into a family outing. I mean, why not?! The forecast had zero rain in it plus it was set to be overcast all day. Win, Win. Or, so we thought... 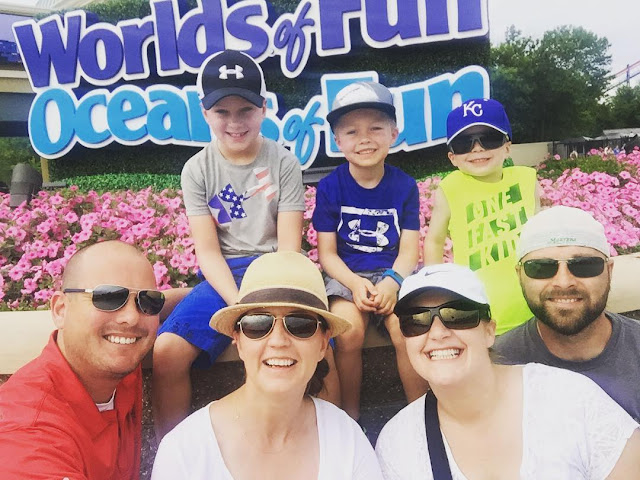 As soon as we arrived he headed straight to the carousel--it was right there so why wouldn't we just knock it out. Kaden was hoping for a cheetah, Logan a lion--they settled for horses as that's all there was. 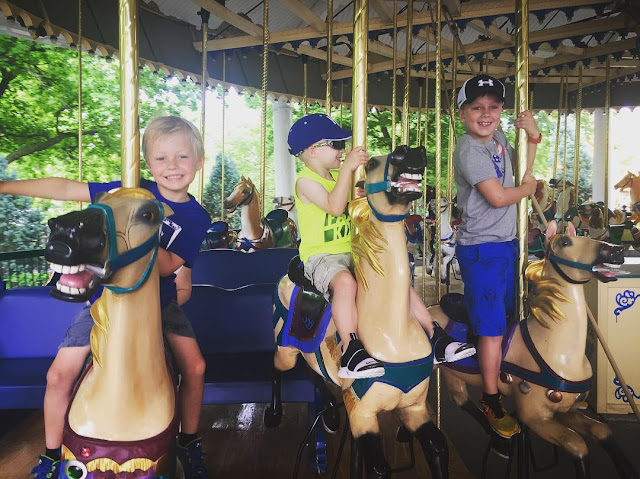 Next up Planet Snoopy. All three boys are now tall enough to ride ALONE, did you hear that, ALONE! This momma wasn't going to have to cram herself in a tiny seat so they could enjoy the ride---I would have done it but it was so nice not having to. 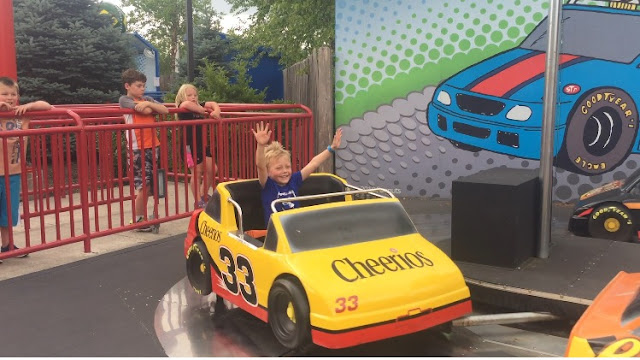 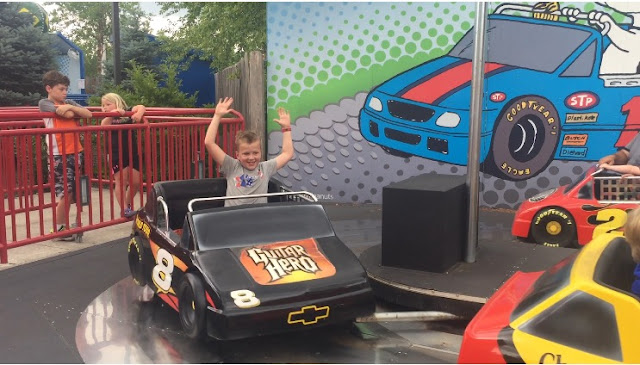 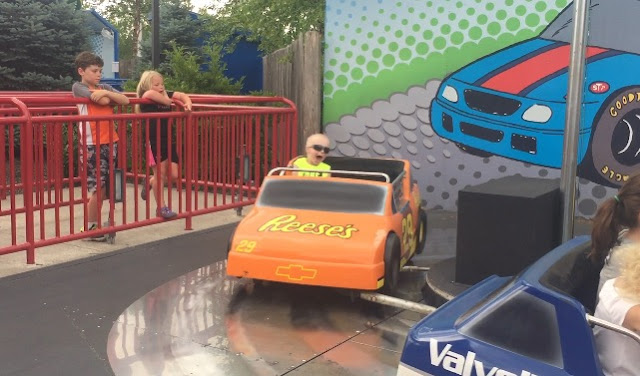 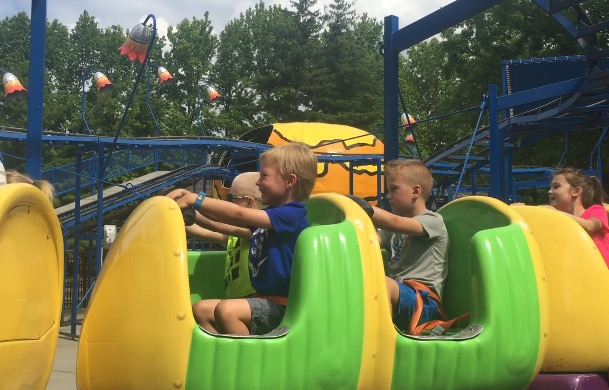 As the boys jumped from one ride to the next, Jake and I took off for the Mamba--Justin doesn't ride roller coasters so it was nice to have someone to ride with. Once we returned a dark cloud appeared. Things didn't look promising so the boys got in a couple more rides and then we headed off to lunch. 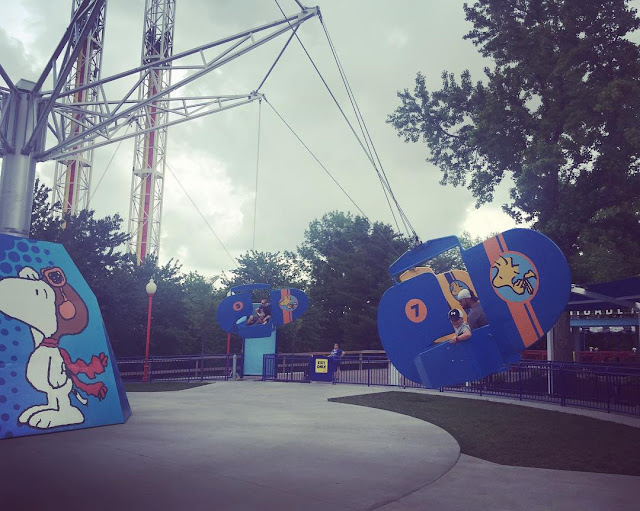 We timed our lunch perfectly, the rain started to pour in, lots of it. Sadly, it was still raining as we finished up but not that bad so we figured we would go play some games until things opened back up. We got about 50 feet from our nicely covered eating spot and the rain picked up, we took cover under a tree and then moved to under a bridge and then as it let up some we made it the rest of the way to the games. Thank goodness because as stood under the awnings the rain came down in sheets. The boys played a couple of games--basically giving away my money & then finally I just said, go for it. Go play in it. There was no avoiding it at this point. We were already soaked, a little more water wasn't going to hurt anyone. 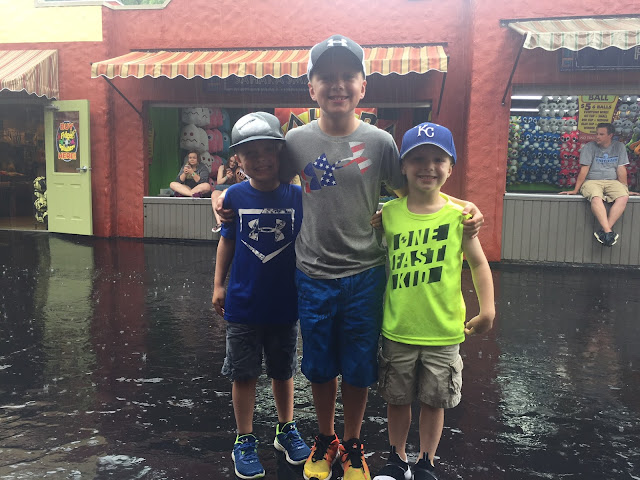 After standing around for 30 minutes or so we asked Justin if the store in which he was taking cover in had ponchos and his reply--nope, I don't see any. Well, there was. & we bought 7. We threw on those ponchos and headed for the exit gates, by the time we made it to the gates the rain had stopped but rides still weren't open so we called it a day. They did give us a free pass to come back on another day which was nice & the boys are certainly excited to for another trip to WOF--although, if you ask me, sometimes it's kind of fun to dance in the rain. 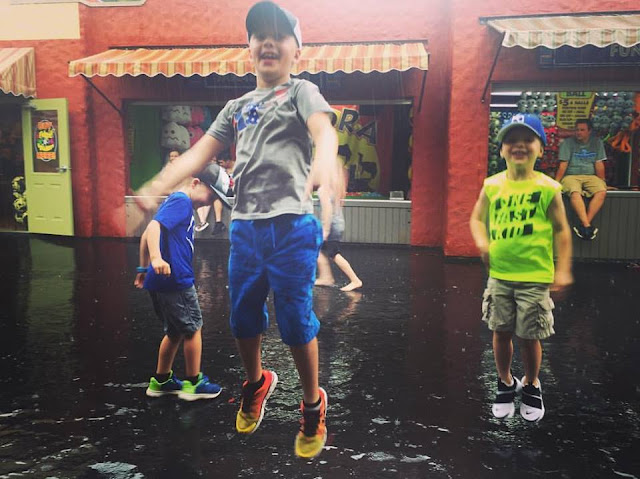