I didn't anticipate how hard it would be to join a baseball team. But let me tell you, it is. Like your- kid-is-just-born-sign-him-up-already hard.

I grew up in a small town called Jasper. We had ONE flashing light as you entered our little town, population 996. So when it came to sports, most of the time we were lucky if we had enough kids to fill a roster for softball/baseball. Every girl in my class that wanted to play, got to play and we were all on the same team. We had two classes for each grade so you knew everyone and chances were that if you weren't in someone's class one year, you would be the next year. Friendships were easily cultivated since you were always together.

Up here in the big city, not so much. It's hard.

For Logan's group, teams were literally formed before kindergarten even started so this past spring I found myself a little behind--you'd think I would have learned with Kaden's group. Thankfully, two of his most bestest---yes, I said that--- friends also didn't have teams so we went for the lottery and asked for these three cuties to be on the same team. We weren't looking for anything super competitive--they're 6 & I want the boys to really love it on their own before the pressure of a competitive team comes into play. Thankfully, it worked and they are now a packaged deal. Where one goes, the other two will go and it has been so much fun watching them play together. We still aren't sure what their future teams will look like but hey, they're having fun right now. 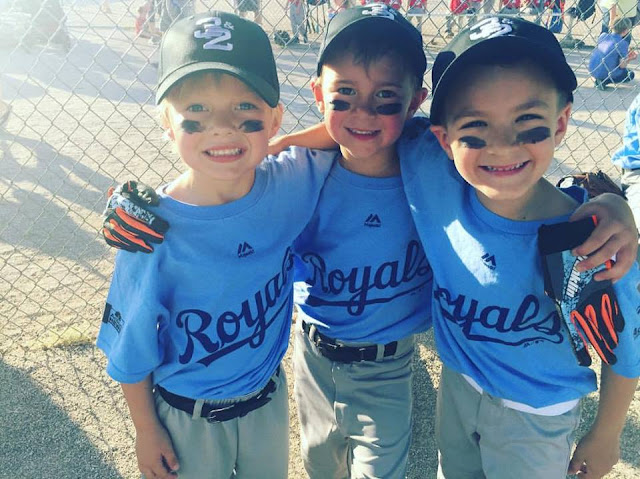 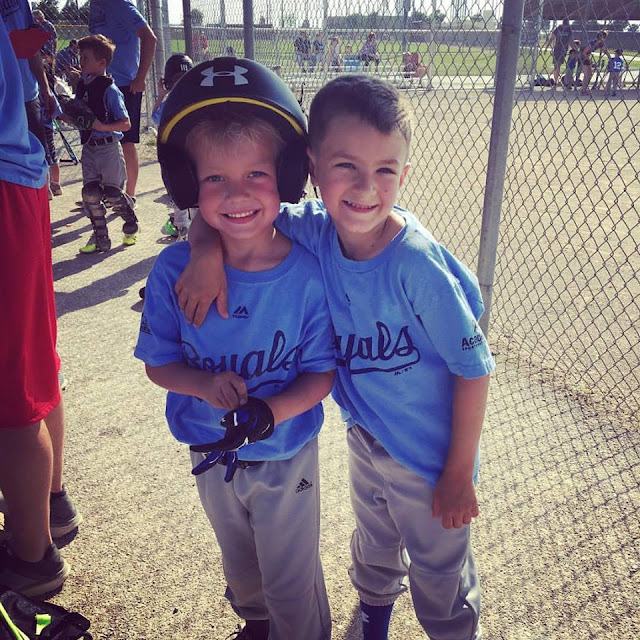 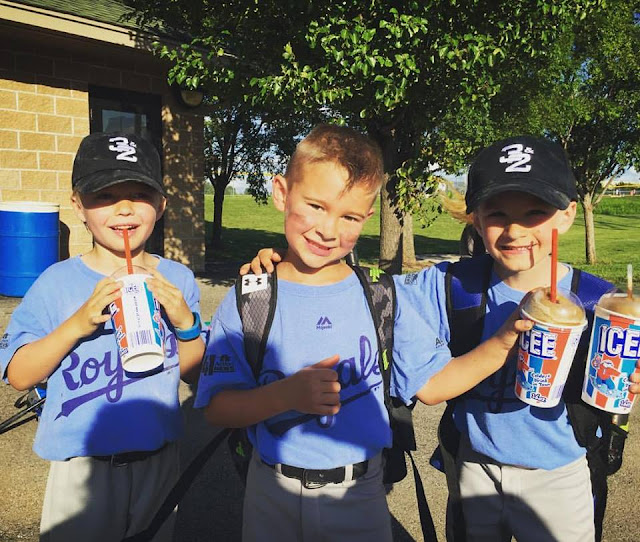 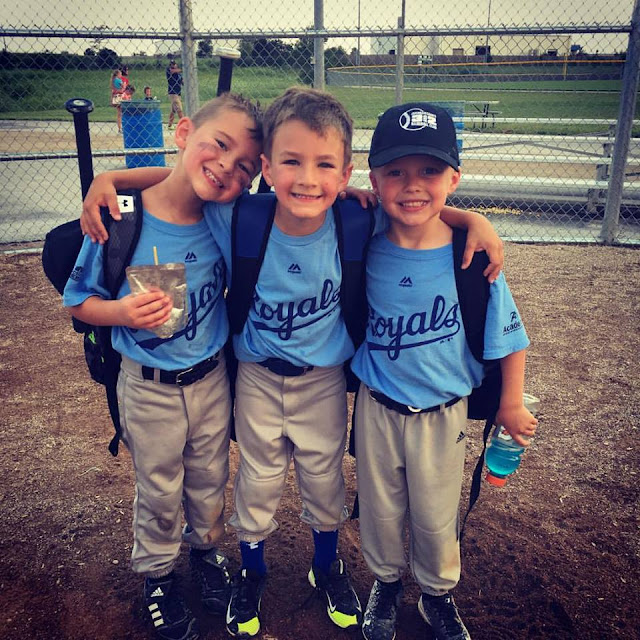 Then there is Kaden. The first "real" outing with baseball we signed up through Olathe Parks and Recs and didn't know a single kid that might be playing so we just wrote his school name down and went for it. We got lucky and a few kids from his school were also on the team. We also lucked out with a great coach and Kaden learned a lot that first season but we were looking for something a little more this past spring. I quickly learned that their "school" teams were pretty full and pretty competitive, again, not wanting something super competitive for the boys at this point & had decided that we would just go for the lottery when Kaden's coach reached back out and said he was moving to 3&2 & wanted to know if Kaden would like to play. A few of the same boys from his previous team were also making the move so he would know a few people even if no one from his school was on the team. Luckily, two kiddos were on his team, Ben and Cole but he didn't know them very well because since there are 5 first grade classes & he hadn't been in a class with either of them. I love watching kids who barely know each other in the beginning build strong friendships over the course of a season. & boy has it been fun watching them develop their skill level & go from hardly getting any outs in the field to sometimes shutting teams completely down during innings or holding them to singles. They've come a long way & now it's time to put everything they know to the test as it's tournament time for the Aces...they'll do great & even if they don't win their first game, they'll still have fun. & that's the most important thing. 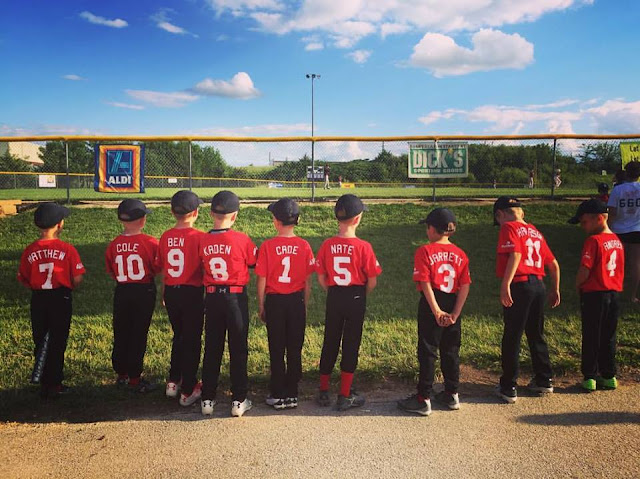 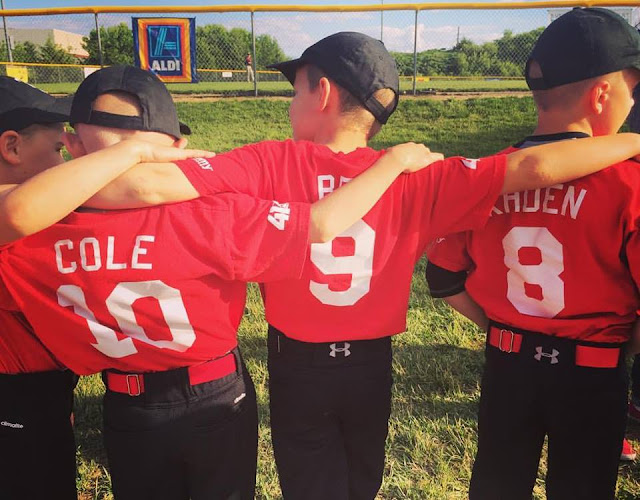 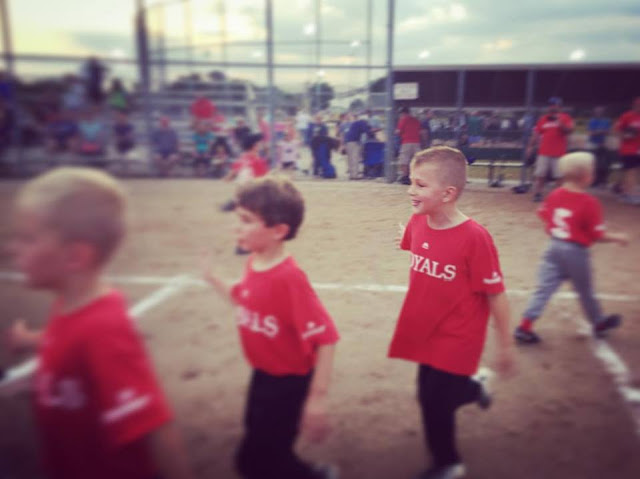