The Bear Went Over the Mountains

It was first grade musical time. A little over 2 months ago, maybe longer, a script came home with Kaden and a note stating that on April 13th the first grade would perform their rendition of The Bear Went Over the Mountain. Every first grader had a part in the musical & they had lines they needed to memorize. They suggested working about 5-10 minutes a night on their lines but when I asked Kaden what his line was, he rattled it off. In character too.

"The creatures of the night, will catch you UNAWARE!"

He had the last line before the fourth song. Since he knew his line from like day one, Justin and I worked with him on slowing down and speaking more clearly. He, however, knew how he wanted to say it and stuck to his guns. Seriously made me smile each time I heard it and we just knew that if he got up there on stage and said his lines as he practiced, he nail it. 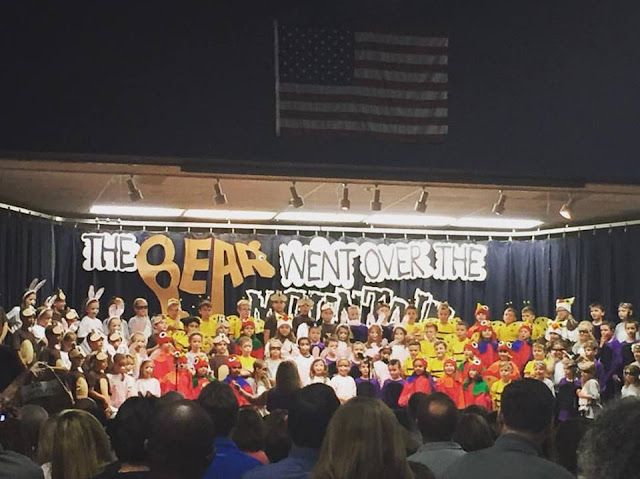 I was impressed that our music teacher was able to give every first grader a speaking part in the play but what was even more amazing were their costumes.

We had squirrels, bunnies, birds, bees, bats, owls, raccoons and of course, a bear.

Kids needed to be there by 6:40 for the 7:00 showtime. With knowing how holiday parties are at this school we knew we should arrive a little earlier than that to ensure we got a seat. We arrived about 6:30 but when we entered the gym most all floor seats were either taken or someone was saving them. So we took a seat on the first row of the bleachers. Thankfully we were given a little heads up as to where Kaden would be standing so we knew we should sit across from him. We instantly found him but he wasn't able to see us.

And thankfully I had a good friend who was sitting much closer than I was and was able to record Kaden's line. & as a bonus, she recorded his "streamer" performance too which I didn't even know he would be doing. Almost as soon as the play started Kaden and a few other kiddos filed off the stage only to come back on the stage each waving a streamer. The only problem, Kaden's streamer was suddenly MIA, so he had a wand with NO streamer. I could see that he wasn't to thrilled but he held it together and continued on with the performance as though he had a streamer all along. The show must go on.

I didn't know what to expect but I was so stinking proud of Kaden and honestly, all the first graders as they put on a pretty cute performance. Lil brother thought so too. Although I am not certain I would have hugged this sweaty bee... 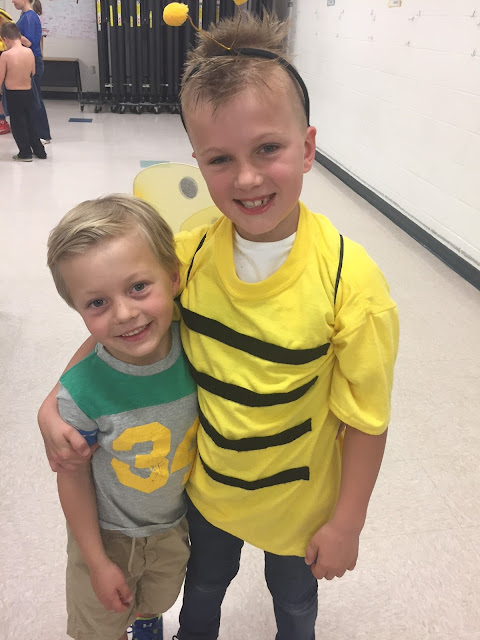