Baseball is here & not just for the Royals but for the boys too! Both Kaden and Logan loved playing last fall so we decided to get them into spring baseball too. We figure baseball in the spring and fall, basketball in the winter--if they want to. We loved Kaden's coach last year but we were thinking about making the move to 3&2 since Logan was in kindergarten this year & we wanted to try and get him on a team with some of his school friends. We found out two things:

1. There was already a 3&2 Cedar Creek Elementary team for 1st grade and they had been playing together for a number of years--I guess these things happen prior to even being in school. So that meant we needed to find a team for Kaden.

2. There was already a kindergarten CCE team also---mind you, Logan is in kindergarten so that meant we had to figure out a team for him too.

As I was asking around for both boys, Kaden's old coach reached out and said he was moving to 3&2 and wanted to know if Kaden would want to play with him and a few of the kiddos from his team last year. This was really best case scenario for us as there were a few CCE kids already on that team & we really liked the coach. He was great with the kids and did a great job of teaching the game. Kaden was officially on the Aces. He would play machine pitch again & his season would stretch from March with practices through the end of June, 14 games.

With Logan I decided to reach out to all the mom and dads of boys in his class and ask if anyone was looking to play at 3&2 and was not on a team--one of the perks to being the room mom. Luckily a couple of boys were looking to join a team and one of them just happened to be one of his best friends Caden. So we signed the boys up and we all put the names of the other kiddos on our sign up and hoped for the best. The wait was long but we did it, all three boys ended up on the Jammers & their 10 game season will also run through the end of June.

The boys have multiple conflicts but for the most part there are no games on the weekends & where there are conflicts it is either with practice for one or the are on separate fields at the same place so Justin and I will just be doing some tag teaming at those games.

The first few games were rained out and Kaden was so disappointed. He really wanted to play. So on Sunday night after Justin and I returned from the lake he asked about the weather for Wednesday. I kind of thought it was odd for him to ask about the weather so I asked why, "Because I really want to play my game Mom. If it rains, it will get canceled again and I don't want that to happen." Good thing for him, the forecast was looking sunny and bright. 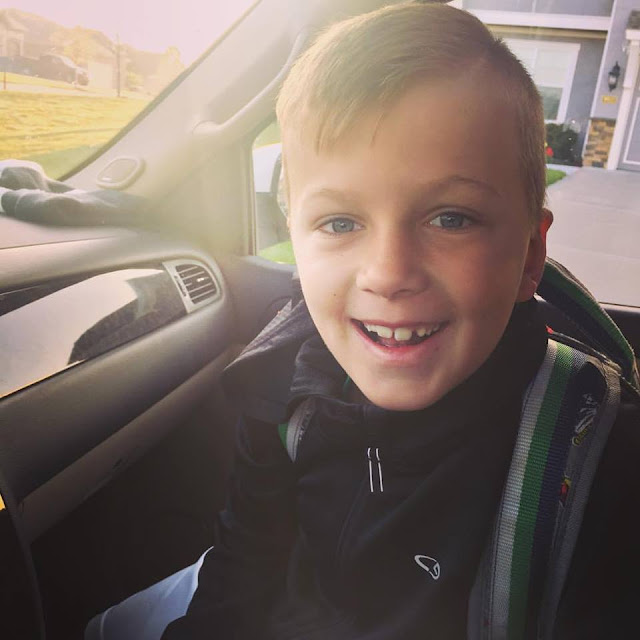 & when I walked in from work on Wednesday he was dressed and ready. We arrived at the ballpark only to find out that we were playing against the team that one of Justin and I's college friends coached. His son was the catcher so this picture is pretty special with Kaden batting and their son behind the plate. 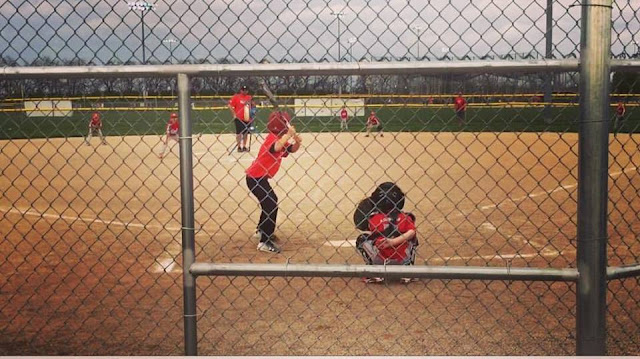 We didn't win but it was fairly close until the last inning. Kaden didn't get on base. He struck out the first time and the second time at bat he grounded out to the first baseman. It was a close play, close enough Kaden felt the need to slide into first but in the end, he was out. He was disappointed and got a little upset which I didn't like to see but at least we know he wants it. After he was able to calm himself I had to remind him that we run through first base, we don't slide. That only Eric Hosmer can do that. He laughed. & then said he wanted to be Hosmer. Give it some time buddy. 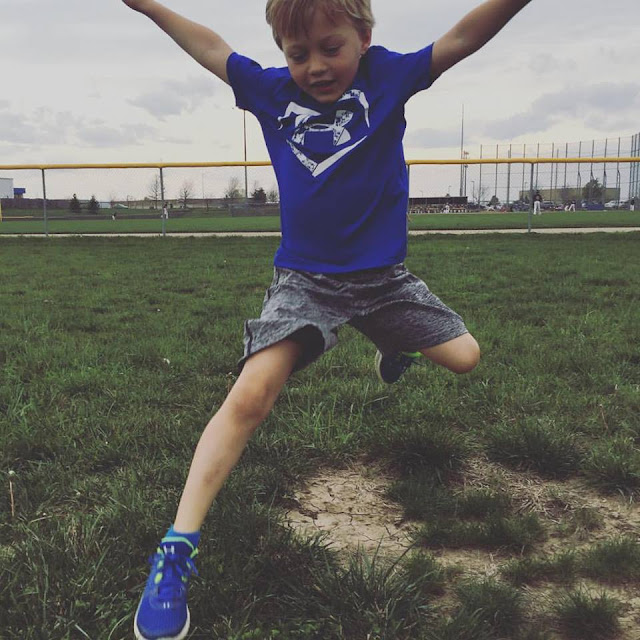 Well, he wasn't looking forward to the game. He didn't want to sit and watch Kaden play the entire time & was just so worried about what he would do. He managed to find a few friends and they chased one another in the open field next to the ball field. At one point he just had to show me how he could jump over this huge hole in the ground. Pretty good leap Logan. Pretty good leap.

It was nice to get the first game under our belt but I am not wishing this season away too quickly. I love watching the boys play ball--hopefully in the next few years we can get them on the same team. The South boys.
Posted by Kayla South at 9:04 PM