We typically don't have set Easter plans each year. A few years ago we hosted our families, last year it was pretty small and we went to a Royals game, one year when Kaden was little we went to my mom and dad's. The only constant, family. This year was no different.

We took off for my mom and dad's on Thursday evening after Kaden's 1st grade musical. We arrived just a little after 10 but mom and dad were still up which meant the boys got candy and Popsicle. As soon as they were done though it was off to bed as we would have visitors nice and early Friday morning, cute visitors too. Really, cute visitors that had grown so much since the last time we had seen them. I spent most of my day looking at this... 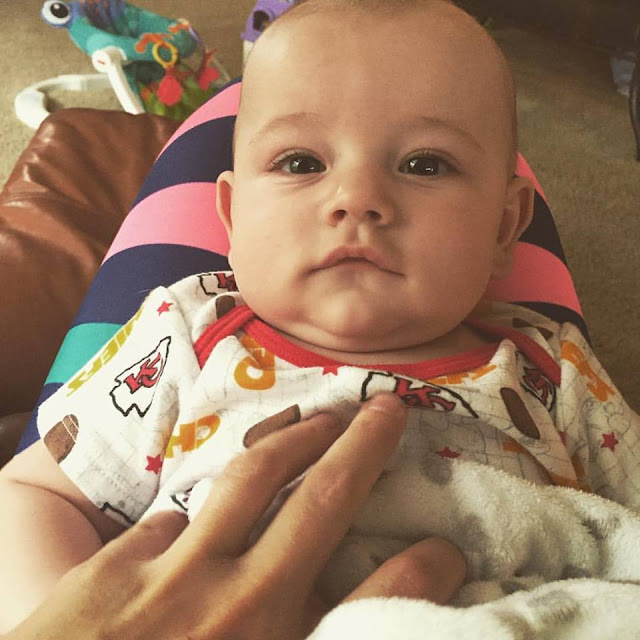 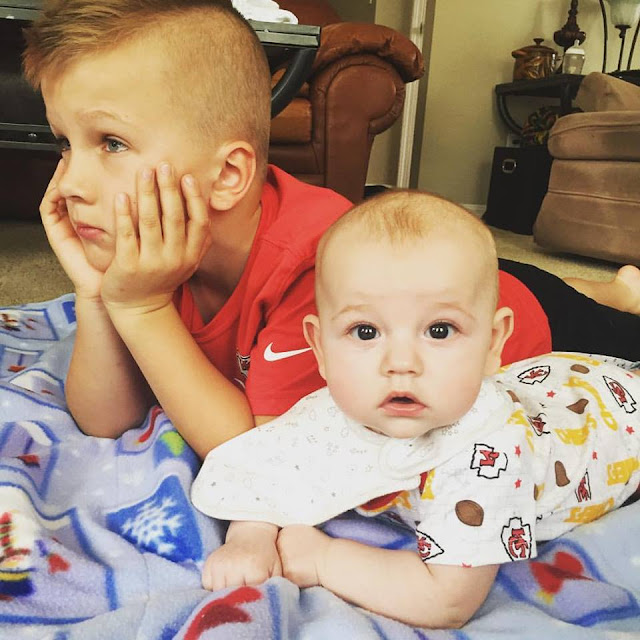 Friday was such a beautiful day and Grandma Sara wanted to introduce the boys to Food Truck Friday up at the Carthage Square--and boy were we glad she did. I had an awesome brick oven pizza & the boys had some yummy turkey sandwiches followed by cake pops. 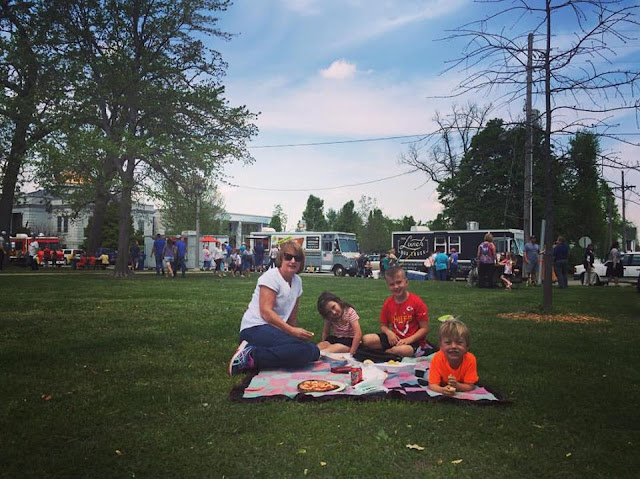 We didn't want to stay away too long as the Papa Tom was left with Trenton so we hurried back where the boys and Miss Madison headed outside for rides on the golf cart & I assumed my position holding Trenton again as Grandma Sara started working in the kitchen to get our Easter Dinner ready--Papa Richard was headed over and Jennifer and the kids were coming up too. Miss Leah just recently got her driver's permit so when it was time to head and pick up Papa Richard, I told her to grab the keys and she could drive. We made three stops--Sonic for ice, Braum's for milk and the third stop being Papa Richards. It was an eventful trip, while in line at Sonic, I mentioned that she would have to get a little closer to the window when she pulled up because we wouldn't be able to hand them the money. While we were waiting a car started honking at us. She started getting worried it was at her and I assured her she was doing nothing wrong and it couldn't be at her but in my mind I was worried. Then I saw someone get out of the car behind us and was walking towards my door. I was about to get out as well so that I could have a conversation without her hearing--no need to put unnecessary fear into a 15 year old--when I noticed it was my Uncle Scott. He thought I was driving and was trying to be funny--joke was on him.

On the way back to my mom and dad's I drove. Not because Leah couldn't do it but because Papa Richard needed to sit in front and I wasn't going to sit behind Leah to coach her so she sat in back and I drove. & we both listened. Papa was in one of his moods--my favorite moods--where he talks about the good ole' days. He told stories about growing up and about Grandma Hartley, who we were all missing a little more that day. I just love his stories and they're part of the reason I also volunteer to pick him up. 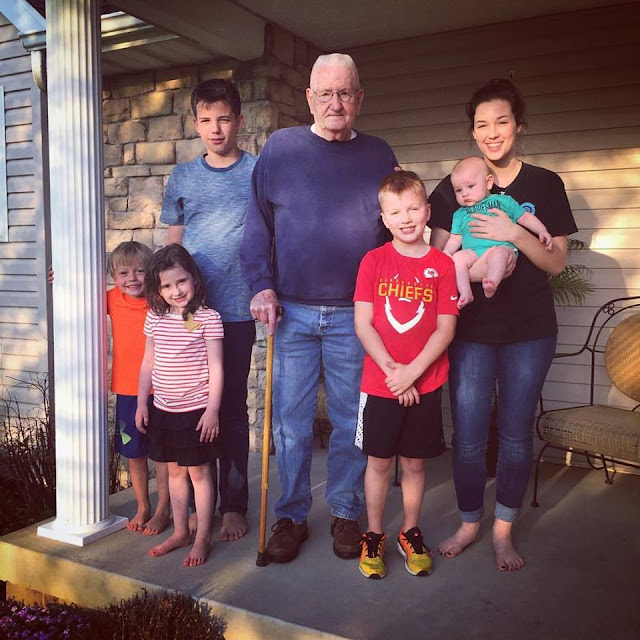 & this picture just brings the biggest smile to my face. I am so blessed with the fact that my boys not only met their Papa Richard but that they got to KNOW their Papa Richard and he got to know them. I can only imagine the conversations he will have with Grandma when they are reunited again, I'm sure would love to listen as they each share their perspective on the same events!

Before we left the next day--we had to make it a quick trip because it was Easter weekend and we missed Justin who was at home preparing for our Easter brunch the following day--the boys played a little more with the pup, who had also grown so much & helped plant the garden. Help is a probably a strong word, more like they played in the dirt while Papa, Blake and Grandma did the heavy lifting. Me, well Leah and I snapped a few pics of baby Trenton. 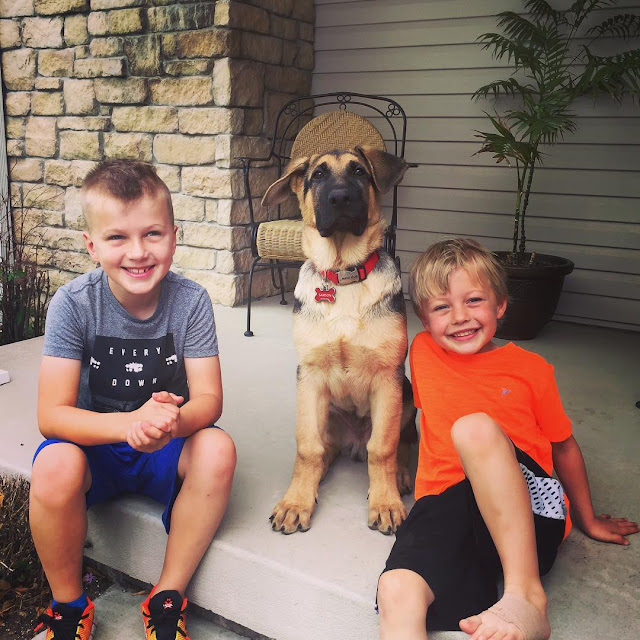 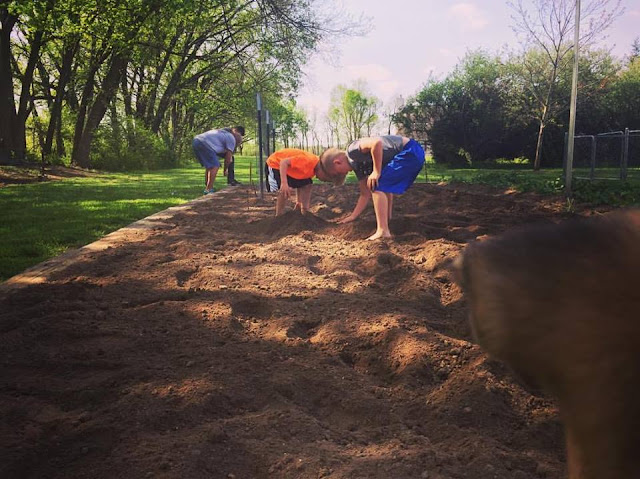 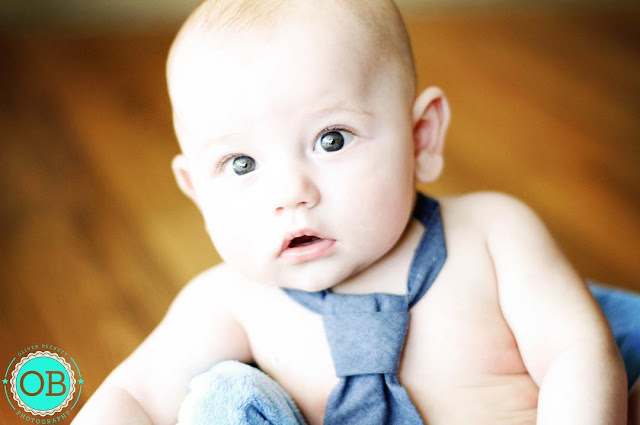 Seriously, could he not be cuter!?!

Our time came to an end about lunchtime & we headed back north towards the city where Justin was waiting with new flowers to be planted. It's one of my favorite things about spring. I love all the bright colors---flowers, grass, trees.

We pulled the house together as quickly as we could because the following day we would be hosting brunch for Justin's side of the family. This year we were missing Adam, Becky and Colton as they were enjoying Disney World but we gained Uncle Bob, Aunt Barbara & Jeff and Jenny too. 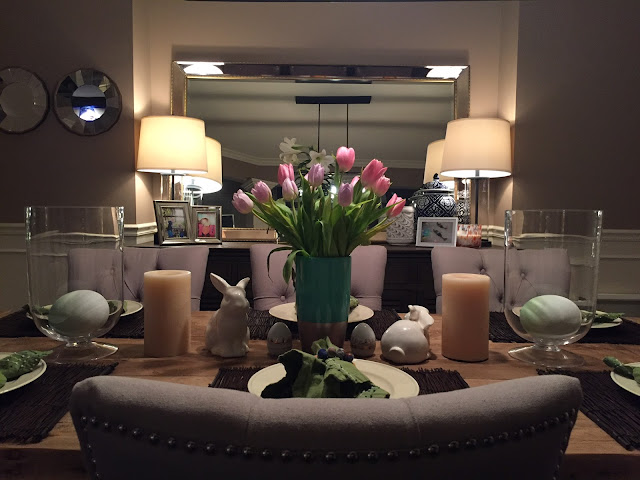 The boys woke up excited, they knew the drill. The Easter Bunny had visited and it was time to check out their baskets, bedhead and all. 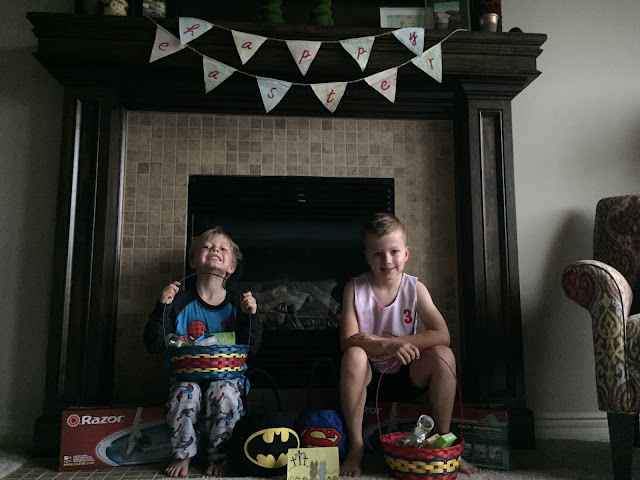 Brunch was delicious as always & the boys were eager to hunt the eggs the Easter Bunny had left behind and to try out their new scooters. So while they waited for just a few more minutes, Aunt Barbara and I hid the eggs--blue eggs were Kaden's & yellow and green were for Logan. Even Steven at our house. 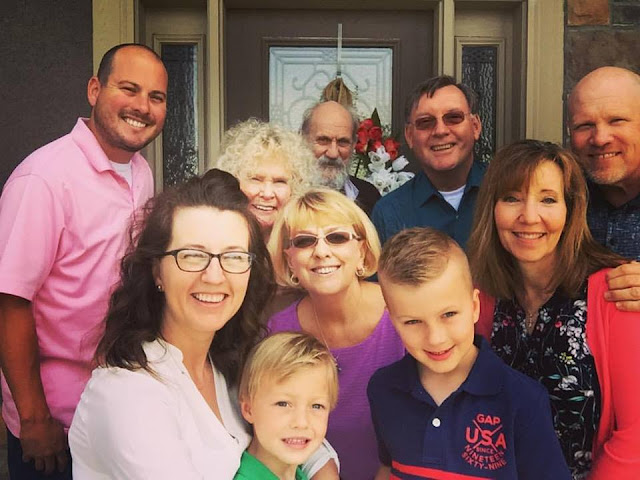 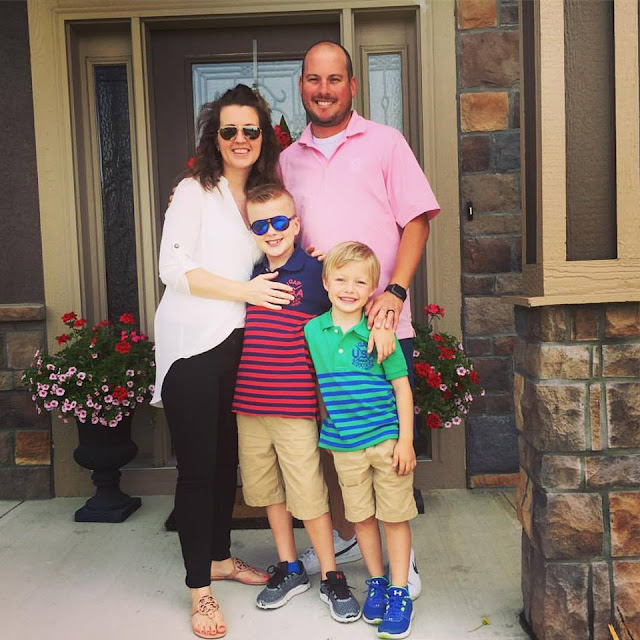 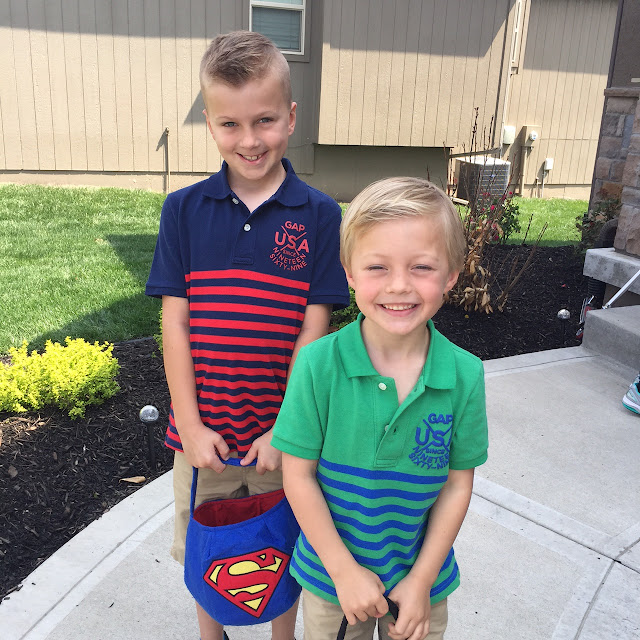 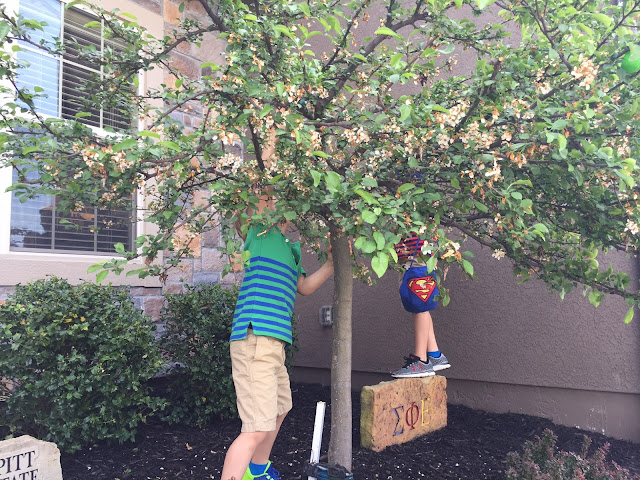 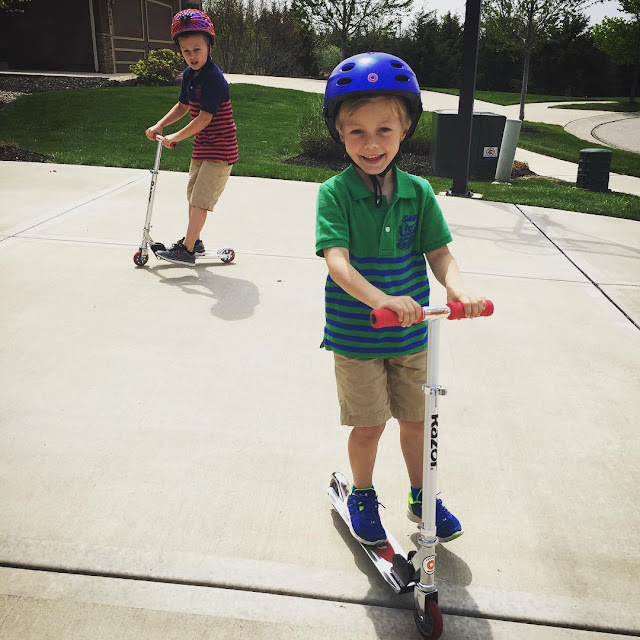 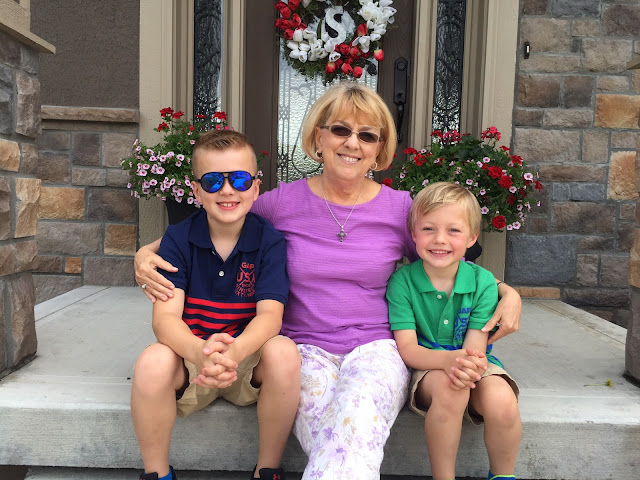 As our brunch started to wind down we pulled out Kaden's homework and noticed that we needed to find something from nature that he could take to school with him the following day after writing a brief report on it. Luckily we live near a lake so we took off for a walk, well I walked, they rode their scooters. 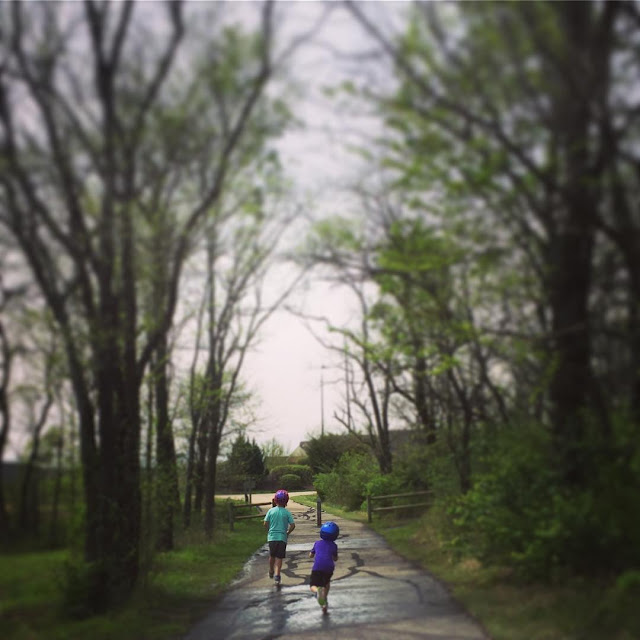 We didn't really find anything all that great, I mean we could have gotten grass and sticks out of our own yard but we settled on a long blade of grass and headed home. As we were getting close to home we found a luna moth--with a missing tail that wasn't doing too good. We picked her up (we were able to determine by her wing coloring she was a she) and we took her home. We placed her in our flower pots and checked on her from day to day but by Tuesday, she was sadly dead so she became Kaden's little nature item.

Easter weekend was spent pretty much just like it's supposed to be spent--with family and remembering just how lucky we are to be the freaking son or daughter of God. We may doubt that we are enough when it comes to most roles in our life--wife, daughter, mother, friend, colleague--but being his daughter means I never have to doubt I am enough for Him. That gives me peace. 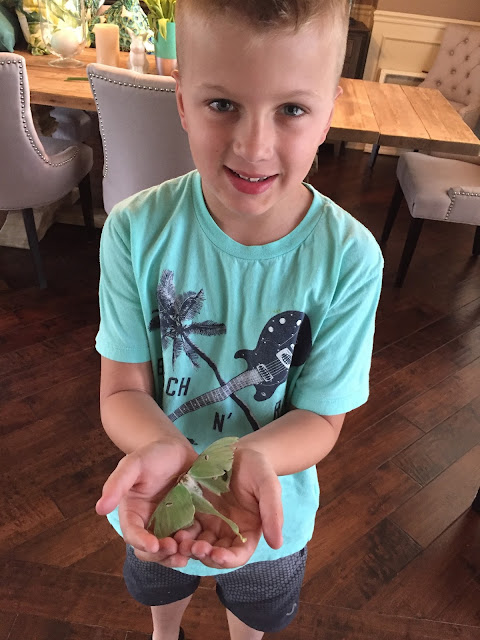 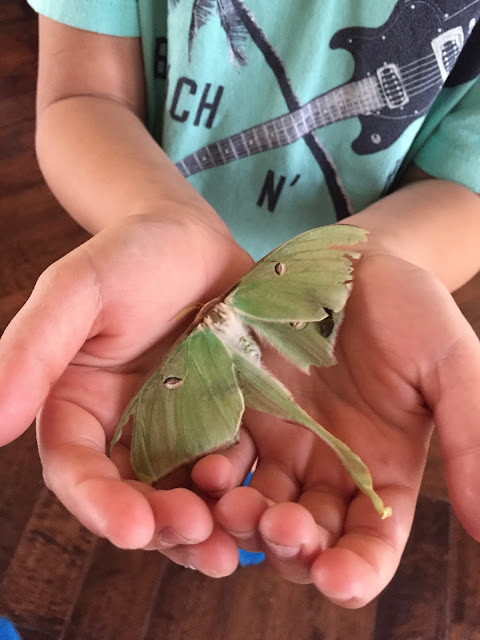