We all have them. That one or two drawers in the kitchen that are filled with some some-what-maybe-kinda important things but mostly just crap. & as clean and simple as these drawers always start out, it takes no time at all until they just get shoved full of anything and everything. Anything and everything you think you may need-maybe not today or tomorrow but one day, you will totally need that thingy majiggy and you will know exactly where it is.  Yup, we all have them.

At least twice I year I try to go through these drawers and take out all the crap. Reorganize the "stuff" we do need--or will probably need. And the cycle starts all over again. This time around, those some-what-maybe-kinda important things weren't going back in and these drawers would start serving a purpose.

Usually I take the challenge of cleaning out these drawers on a whim. I usually have an RBV (Red-Bull Vodka) beside me & the Royals are playing. It starts with "I can't find any pens" and ends with about 20 working pens found after cleaning it out.

I also feel lighter after having purged something & this night it started with two drawers and ended with the cabinet below that. & a LARGE bag of trash--seriously, I am not sure how that much crap fit in there after having looked at the size of the trash.

I am hopeful that this time things will be different, that those two drawers and one cabinet will stay clutter free for more than a few weeks. You see, I did things differently this time. Those kit lenses that I haven't touched in 5 years-gone. That box from my camera that I haven't touched in 5 years-gone. Note cards that weren't getting used-gone. Half completed projects-gone. Seriously, I can't tell you how much weight felt like it was being lifted off my shoulders at that moment. The feeling felt so good that I didn't want to stop there so the next night I took on the buffet in our dining room. & you know what, another bag full of crap. & more weight being lifted off my shoulders.

But let's back up--I started this purging project off with one thing in mind, ridding our house of toys. I read something the other day that a friend posted on Facebook about how getting rid of 'stuff' saved this woman's motherhood. The basis of the story is that she always felt like they were spending time picking up EVERYTHING in the house. So one evening she spent time getting rid for the toys, not all of them but a lot of them. She made three piles, Keep, Trash, Donate and if she felt the toy wasn't benefiting her children then she got rid of it.  The following morning when the kids came downstairs they hardly noticed what was gone--what they did notice was everything still there and played for hours in the toy room with their trains that they could now see. She immediately felt lighter. I wanted this.

So I printed off her little manual and went to work at home, first starting with a few smaller projects to get into the mood--you gotta be in the mood to purge and then finishing with a few of the larger projects in the house. And since I work full-time, I knew I needed a weekend where I could put the boys to bed and stay up till 1 or 2 getting it all completed and out of the house before they were up ready to play. So Friday night at 9:30, I put on my gloves and I took the toy room head on. 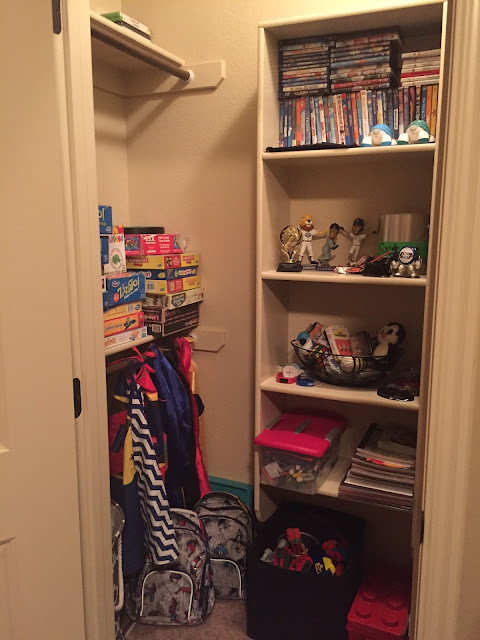 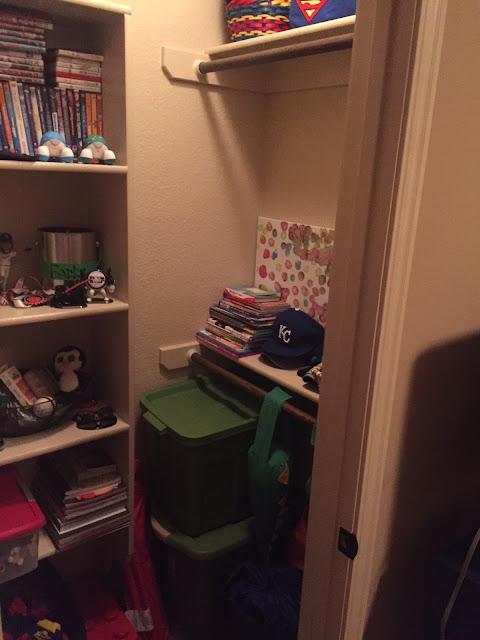 I started in the closet. At the bottom and worked my way up. If it wasn't a Lego, a Matchbox car, Nerf stuff, board games (with complete parts present) or books, it found it's way into either the donation pile or the trash. I was amazed by all the teeny tiny toys we had that didn't get played with any longer or may have never been played with. The boys had maybe 20+ superheroes and TMNTs. It was craziness, craziness that found it's way to the donate pile. Slowly but surely I made progress, I could finally see the floor, the games were organized, the books were sorted and stacked where you could find what you needed. Just having cleared the closet out made so much difference but I wasn't about to stop there. I tackled their baskets of superhero capes and costumes, their drawing table, the "junk" basket--if it was in the room it was gone through. 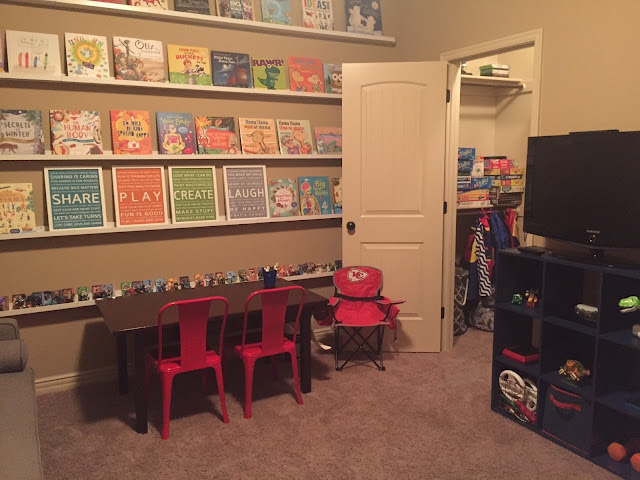 In the end, I decided to keep a few superhero capes (the ones with special meaning), the dino tails (which they haven't worn in ages but both have worn in the last few days since they can now see them), their remote control cars, books, Legos, Matchbox cars, board games and Nerf guns. I filled one large trash bag full of trash and two large boxes of toys to donate/sell at the garage sale. I wrapped up about 1 am but I knew that if I didn't get it done before going to bed and clear the room of the trash and the two large boxes that the boys would probably put up a fight when they saw the room half completed the following morning, so there was no choice but to get it done before I went to bed.

We woke up the next morning and I wasn't sure what they would do, although our morning was tight since we had to be out of there early, they both made it to the room and not even one complaint was muttered. Kaden instantly found his Fitbit & quickly declared "I've been looking for this for like a thousand years! Thanks Mom for finding it." & then gave me a giant hug & thanked me for cleaning up the toy room too. Logan was right behind him.

I kind of figured that after that large of a project that I would have had enough but nope, I went straight for Logan's room and then followed up with Kaden's room. I had been holding onto clothes that were Kaden's and that I figured Logan would grow into but truth be told, I end up buying Logan new clothes anyways. So unless they were special shirts and "sparked joy" I put them in the garage sale pile. I got rid of most all of the pants that Logan and I fight over, shirts too. He hates button downs so why would he need 8 of them in his closet--he won't wear them. EVER. So I kept 2 for those non-negotiable holidays and got rid of the other 6. Same with his sweatshirts, there are so many that I LOVE but he doesn't, he doesn't like how they fit around his head so why fight the fight, it isn't worth it. I dumped a WHOLE drawer of t-shirts, he wasn't using any of these shirts anymore. He had his favorites and that's where he pulls from. Socks. Same story. 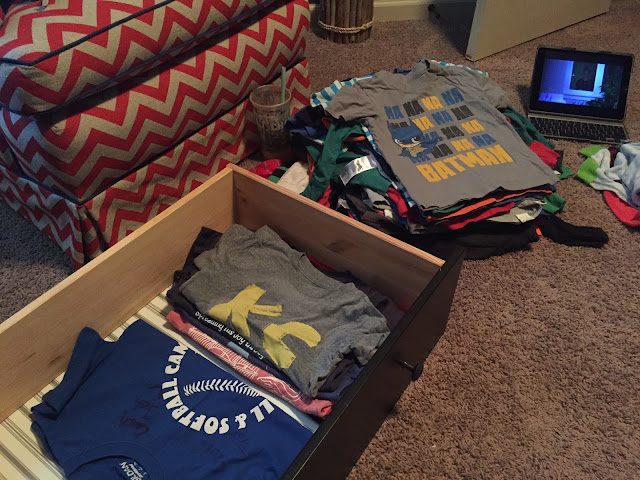 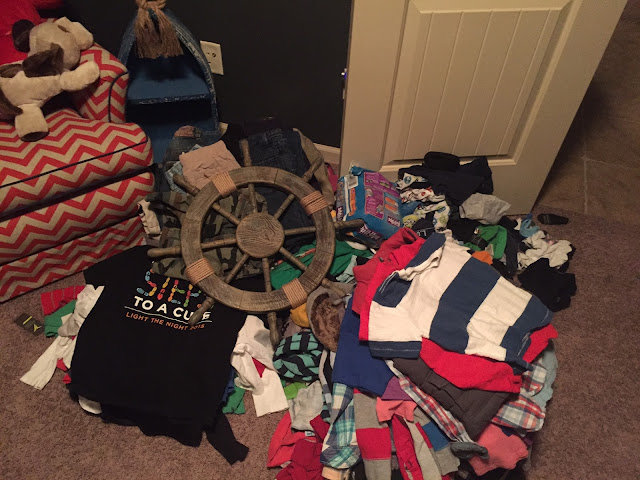 Kaden. Different kid, same story. So much "stuff" that doesn't need to be there. Although I haven't made it into my closet I can only imagine it will go just about the same. & what makes this time different? In the past if I would have said, "well, maybe I will wear that again" I would have kept it but maybes this time around are an automatic garage sale item. The one area that I did manage to tackle were my purses and a few of these still "sparked joy" but I knew I wasn't going to use them any longer so why let them just take up space in our house. Why not let someone else get good use out of them? So, I'm saying goodbye to 7 purses and not going to feel guilty about it either.

At the end of the day, all this "stuff" was causing me frustration. I'd walk into Logan's room and see the drawer that I just spent so much time on organizing busting at the seams because he was digging for a specific shirt & in turn, created a mess. It would infuriate me, I wouldn't tell him that but inside, it just frustrated the hell out of me because I knew it was up to me to fix. And maybe that shouldn't be the case but he's 5 & he does what he can to help out and this is something I do for him. The "stuff" in the toy room, always had to be corralled, whether it was me or the kids, it was just everywhere & exhausting. Not anymore.

My only regret, not doing this sooner.