Six years ago Justin got to enjoy the Final Four for his 30th birthday and this year he was headed to a practice round of the Masters--luck guy. His flight was leaving bright and early on his birthday so I conjured up a way to celebrate with some of his favorite people the evening before. The only thing---I was trying to keep it a secret which meant I had to be a little pessimistic about the things he was recommending for dinner and the basketball games, I couldn't tell the boys because they would surely tell him & I had to make sure that all our friends were "busy" if he were to reach out and try to plan something.

For the most part, everything went smoothly. We were planning on eating at home and I would be fixing dinner. I was already making a cake for him and although it would be a "special" cake he didn't think anything of it because one thing I can do is CAKE and I like to try different ideas out with him and the boys. This year I was going to attempt a pound cake, I had never made a pound cake before but Justin isn't the biggest fan when it comes to sweets so I thought a pound cake with some fresh strawberries would be right up his alley.

I was trying to stall with dinner. I told him I had a few ideas and then he left for salmon to smoke as an appetizer--perfect, that would give us something to snack on and push dinner a little further out and give all his friends time to show up & allow the food that I ordered everyone to show up too. He came home and sadly there was only a small piece of salmon so what did he do, picked up two huge steaks. Then he proceeded to get rolls out and bake them, and green bean to stem. Quinoa was getting ready to be poured into the hot water---I had to stop this. I texted his SIL and said that it might be good if they came a few minutes earlier than expected.

They arrived and he still didn't think anything of it because he just figured that since he was leaving the following morning they had stopped by to drop off a card. Then he saw the Classens' and when he asked Becky what was happening she just darted into the house. He finally figured it out. Everyone was coming to the house for him.

His first thought, food---Kayla didn't plan anything for food, what I have won't feed everyone & that's when I just told him to relax. It was all taken care of.

A few minutes later CG and Becky arrived with Joe's Kansas City for everyone. He couldn't believe that I pulled it off but I explained that I had only shared it with Logan earlier that day and wasn't about to tell Kaden because well, it wouldn't have been a surprise.

We spent the rest of the evening with the kids running around in the backyard & the adults, all but Nolan who was with the kiddos, watched the tournament games. We needed the Carolinas to win. Both would have been nice but North is really who we needed to pull out a win.

At the end of the night, the kids were exhausted, the cake was gone and North Carolina had won. It was a pretty happy household. 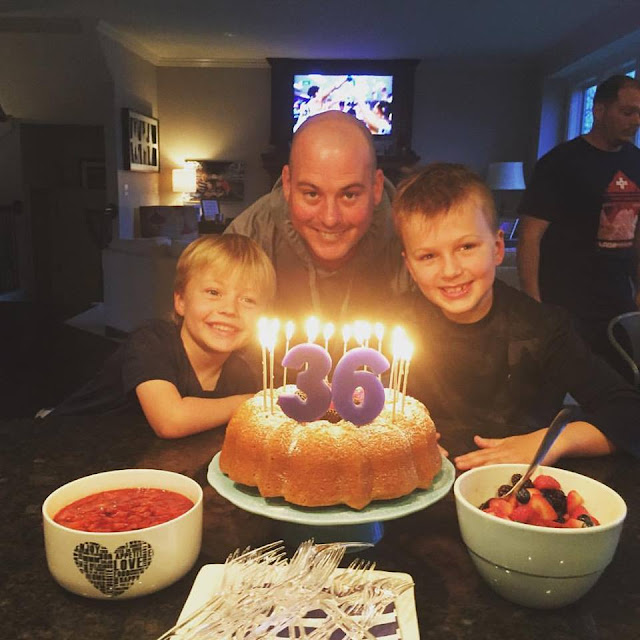 Happy Birthday Love. The boys and I are quite lucky to have you all to ourselves.
Posted by Kayla South at 11:10 PM