Since the day that Justin was born he has spent his summers at the lake, Lake of the Ozarks. His maternal grandfather built the lake house when his mom was just a little girl and the rest is history & memories being made. There have been updates to the house along the way but for the most part the structure has stayed the same. After Nanny got to an age where it made sense to transfer the title, Justin's mom and his aunt inherited it & thus we continue to spend part of our summers on the water. As Justin has gotten older, so have his cousins and each of their families have grown to where there isn't as much space as there once seemed to be. So we started brainstorming on ways we could make better use of the sleeping arrangements. And then that led to a huge list of to dos that needed to be done at the lake house over the course of the summer. Instead of spending part of our time during the summer doing some of the jobs, we decided to knock it all out the beginning of the season. Open the cabin, rid it of clutter, clean it from top to bottom, make a few changes & then sit back and relax when we visited during the summertime. 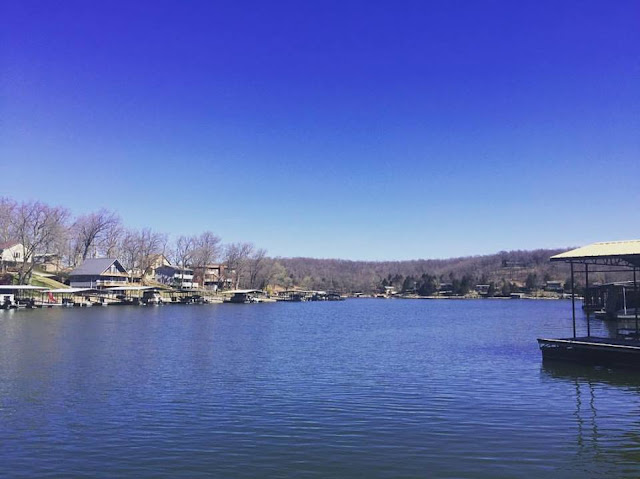 My mom came up to watch the kids as it was an adult only weekend. The first leg of the caravan was my MIL and I. We packed the Yukon as full as we could. 3 sets up bunk beds, 1 mattress, 2 large ceiling fans, 7 pillows, paint, food, cooler & overnight bags & took off for the lake. We would arrive after dark but we thought that it might be best if we could get the cabin open, get everything working and start moving things out of the way so that when our helpers arrived the next day they could get straight to work too. 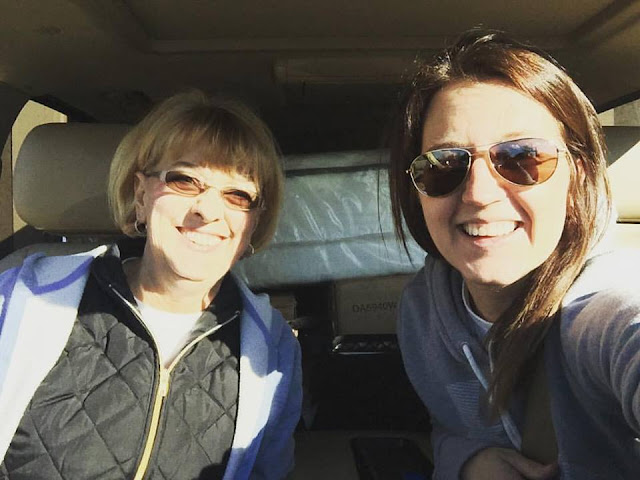 The big project of the weekend was the porch area. This porch area is original to the house and has about a couple hundred jalousie windows. They are a pain to wash but totally worth it--I love the character they add. We currently had two futons that were housed out here and they always had someone sleeping on them--it's only a two bedroom cabin. We thought that we could remove the desk, the wall shelving unit from one end and replace it with a full size bed with a twin bunk on top. 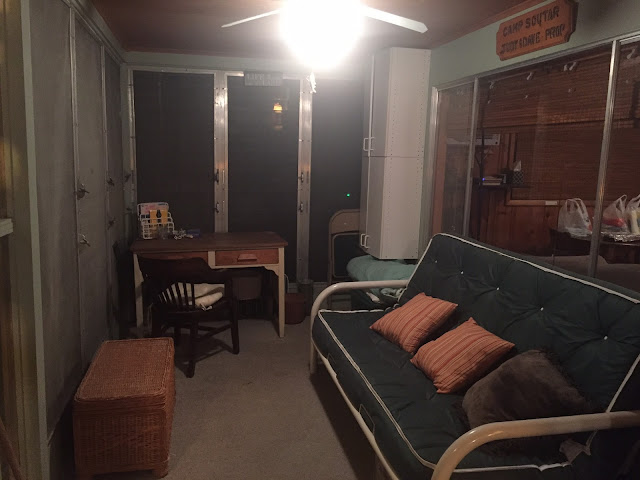 On the other end we thought we could replace the futon with 2 bunk beds, making 4 twin sleeping spots. We knew the measurements would work out but we just didn't know how it would look, I was a little worried as I started to put it all together. Somehow, Janet and I managed to remove all furniture out onto the deck & at about 11:30 decided why not start putting together the beds and prepping the walls for paint. 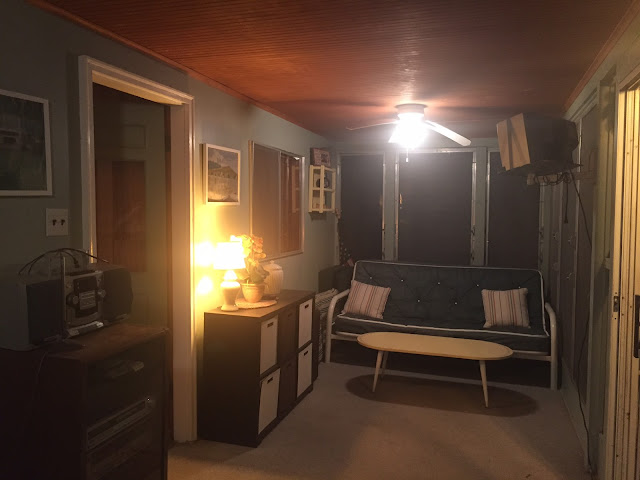 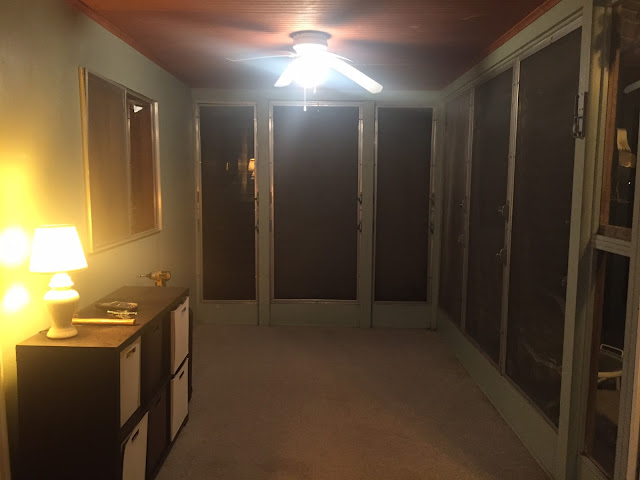 By morning we had one bed mostly put together and we were ready to paint. And you see that spot over there, yup, I decided to sleep on the porch, try out the new bed. And you know what? It didn't creek every time I moved like those darn futons did! 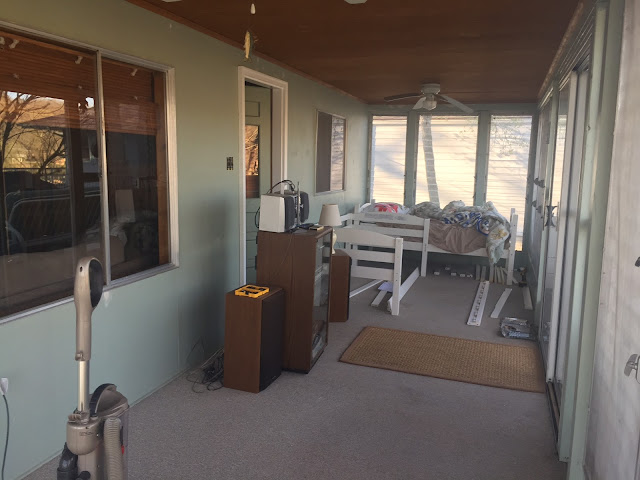 We knew we had limited space to work with so we started with cleaning the screens and windows at one end where then Janet and I began painting so we could at least move one bed into place and out of the way once she was done with that area. As we started to work, Leanne showed up and provided some much needed DJing and help. She took over window duty and finished clearing the cabin of the old trust radio. 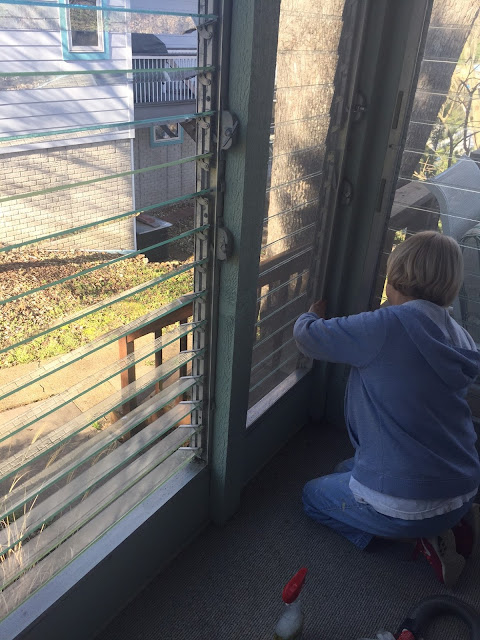 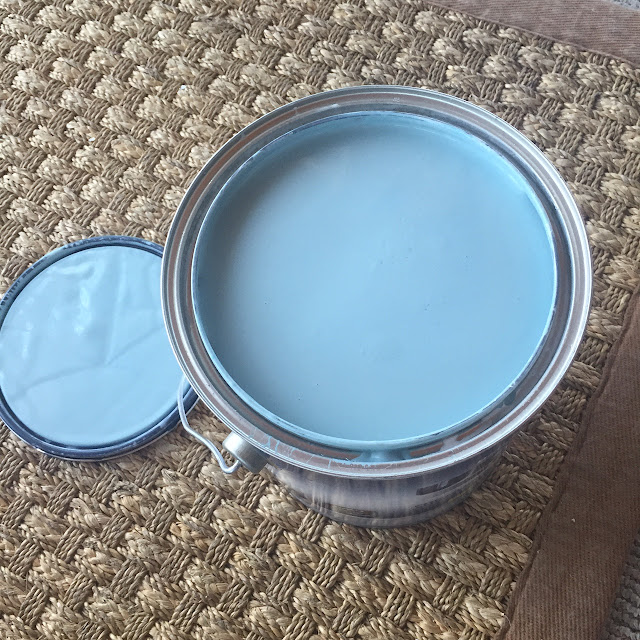 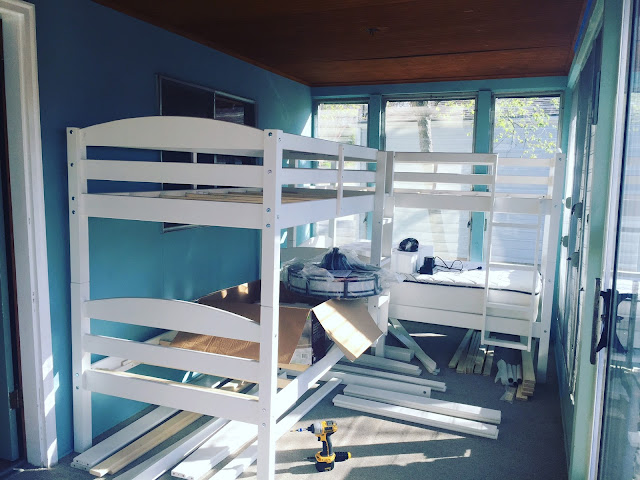 Before the night was over 3 other caravans showed up--Adam and Becky bringing 6 mattresses, a whole lot of wood & tools. Justin. And Craig. & as soon as each one arrived, they got straight to work. We managed to finish the painting, have all the beds put together and have one of the ceiling fans installed. Oh and Becky started the DEEP cleaning of the cabin. 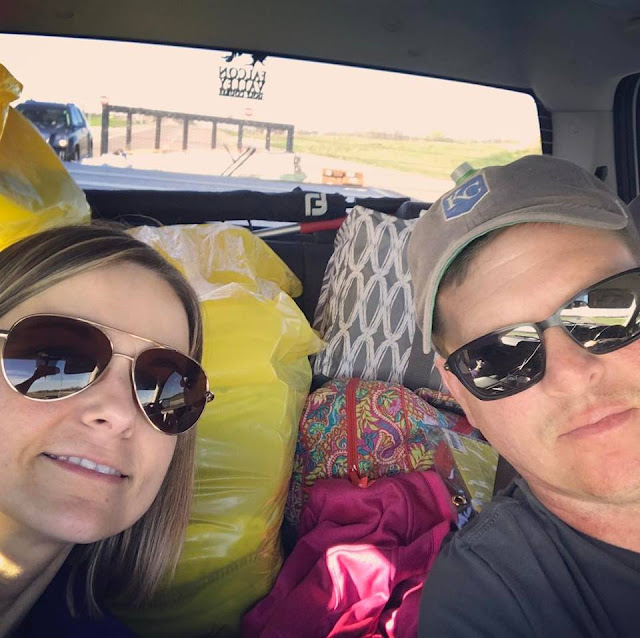 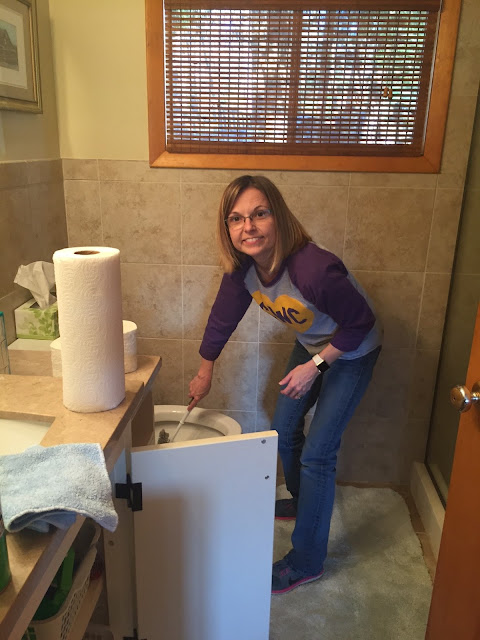 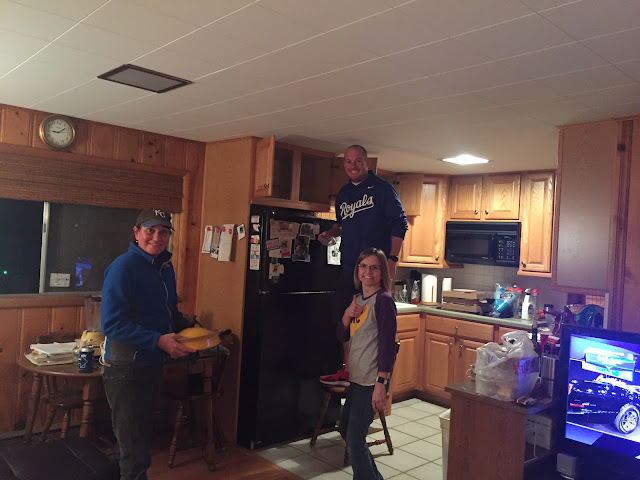 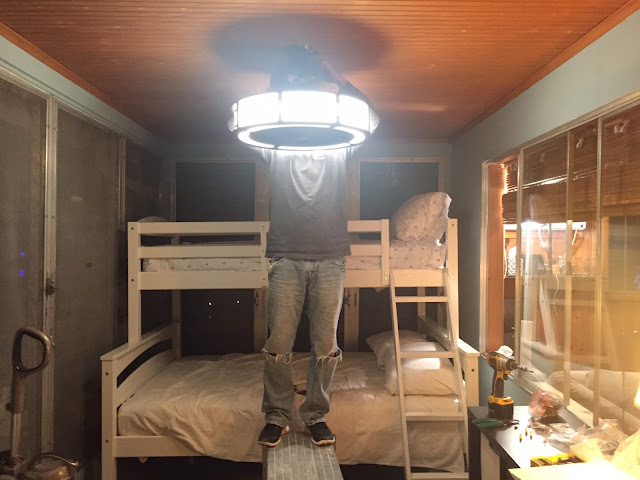 & when we woke up in the morning we could really see the porch taking shape. 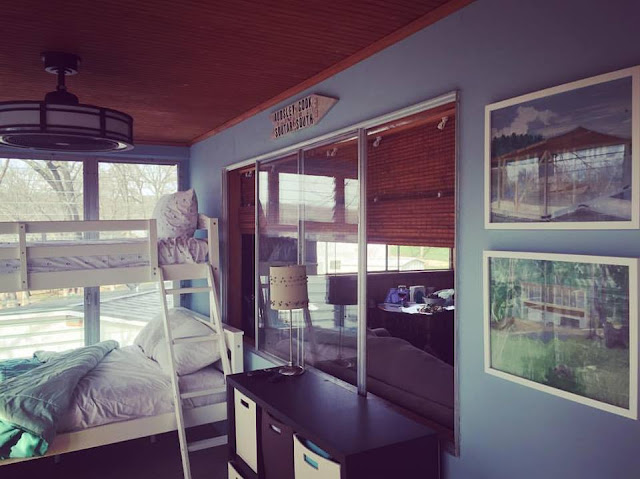 Saturday was divided into two groups. Projects outside and projects inside. Janet and Becky pretty much took care of the inside while Justin, Adam, Leanne and Craig managed the outside projects. I floated back and forth after getting back from a Home Depot run with Adam because we had a fan to exchange for just a light---the matching fan we had bought for the other side was just too big with both bunks there.

The to do list was long but we were determined to get it all done. It made all the difference in the world having so many of us there and so many of us that were capable of taking a task and completing it without much input or help from others. 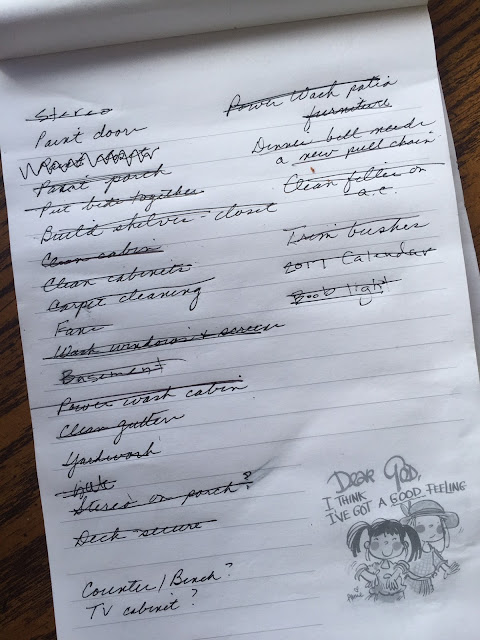 By Saturday night we were able to sit down, enjoy a wonderful belated birthday dinner for Justin and just relax. All the work was done and most everything was loaded back up, Sunday would be an easy morning. 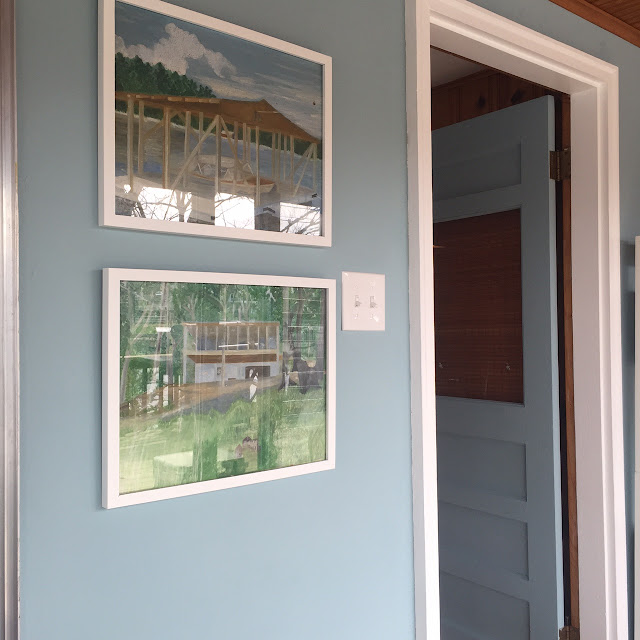 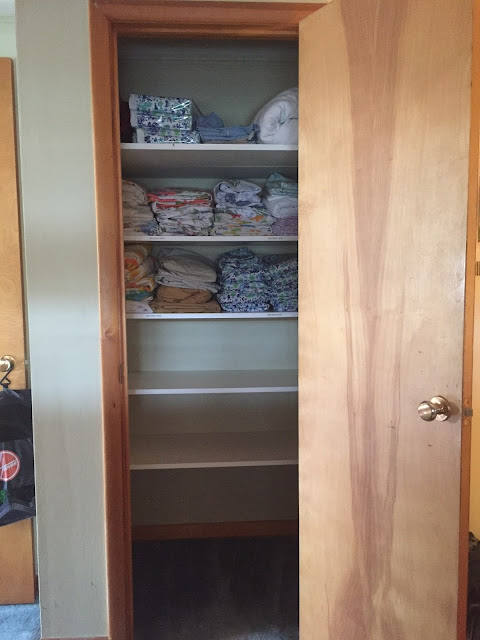 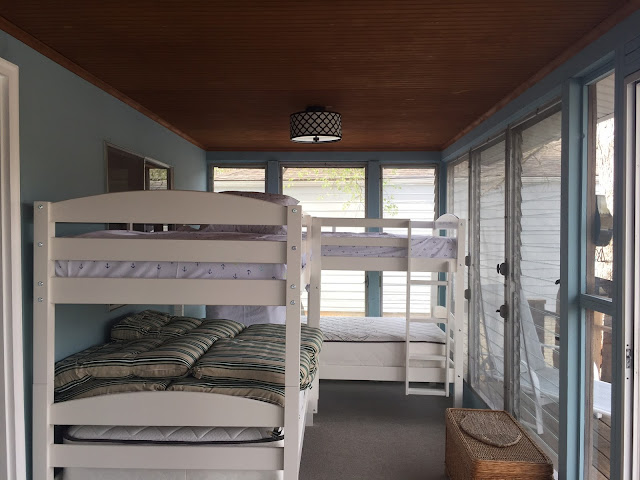 The lake house has always been about creating memories and I pray that this new space allows more and more memories to be created for all of our family. That the work that managed to get done will allow for a few more conversations to be had over drinks near the water. Sure there will be the usual maintenance like mowing and weed-eating but there is no way we would have been able to get half of this done during a summer weekend--especially with kids there. 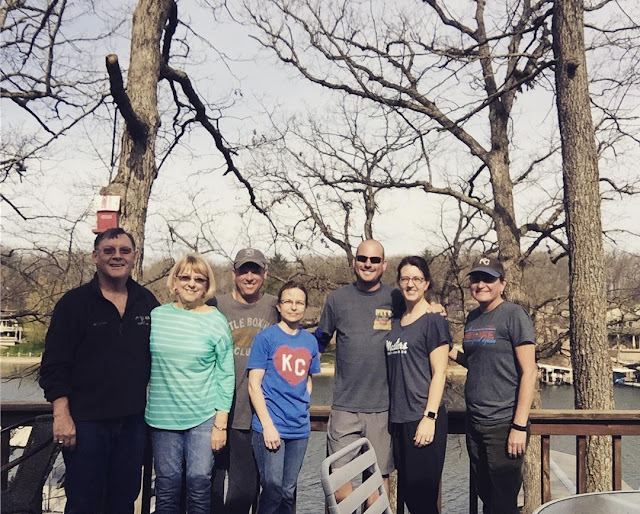 So cheers to the lake house being opened for the season. I for one am looking forward to showing the boys their new sleeping quarters--heck, I might sleep out there too as they are now the most comfortable beds in the house. 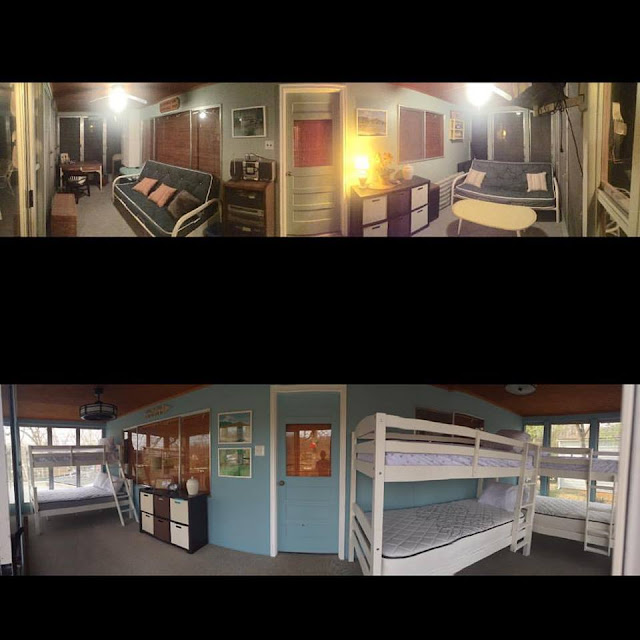