I thought we were done with basketball but then we weren't. One of Justin's friends from high school has a kid that also attends Cedar Creek with Kaden. He and a couple of others on his team played up a division with 2nd graders but they were looking to play in a tournament for first graders (since they are first graders) and needed a few additional players. They asked Justin if Kaden would want to play and we both agreed that we would let Kaden decide. He said yes so that was that.

The tournament was the following weekend so thankfully he was able to attend the one practice they had where everyone could say hello to each other. We were guaranteed 3 games and depending how you did in pool play would depend on whether you played for the championship game or 3rd place.

We had two games on Saturday, the first being a pretty good game. This was a whole new level of play for Kaden. And completely new for me being on the sidelines. The second game was a little more intense but in the end the boys came out on top. Game three was a good game for them all to get some good playing time & learn to work with each other. You see this wasn't a team that would play all players equally, you played when you were needed and coach would tell you when that was. I told Kaden that his job is to be ready to play at any time, not to ask to go in but be ready because coach knows when it's best to play each player. He nodded and for the most part, did great.

After winning all three of the three games the team was set to play for the championship game. And boy was it a nail biter. It pains me to say that I was an emotional wreck. Nervous for Kaden--again this was a new level of play and you just want your son to contribute and have fun doing so. The final game was back and forth. We led most of the game but in the final few seconds they made a shot to send it into overtime. In overtime they made another shot to send it into a 2nd overtime. In the 2nd overtime WE made a buzzer beater to send it into sudden death. That's right sudden death. Believe me, I get why my mom sat in the stands all those years with her head in her hands. Both teams had open shots, both sides of parents were on their feet, people who had no affiliation with this game had stopped to watched. After about 2 minutes, total guess, time was not ticking off since it was sudden death, one of our boys made a jump shot and the game was over.

You could see elation on our team and total disappointment on the faces of the other team. I quickly ran over to the other team and told them each what a great game they had played & then moved over to high five our boys. There were all so very excited. I was excited that Kaden had fun, he contributed on defense too. He has a lot to learn and it was a great experience for him but I'm not sure I can take anymore games like that, I mean, their first graders. 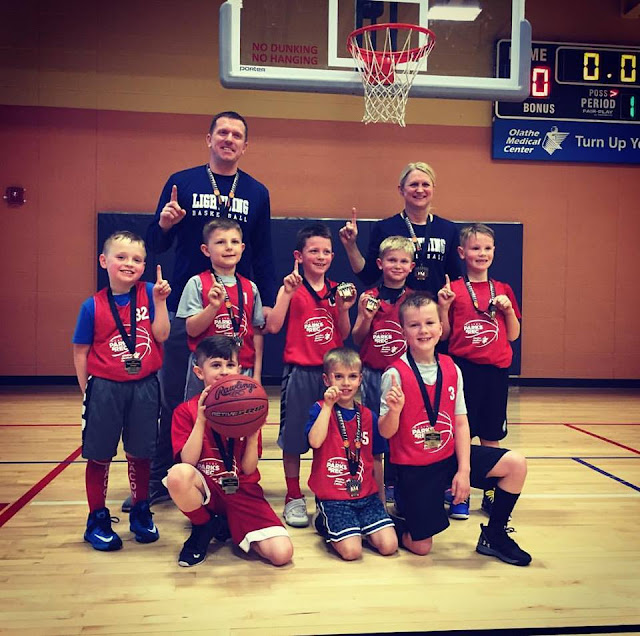 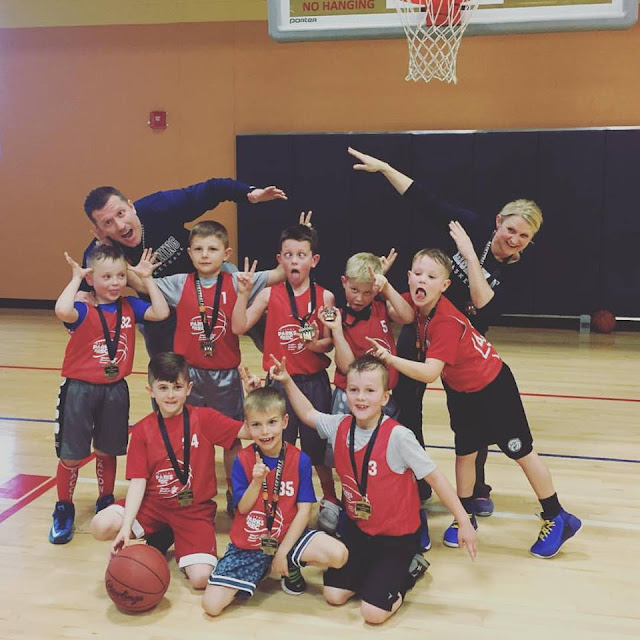 My most memorable moment from this tournament. Kaden was sitting on the bench and one of his teammates was pulled out--the other team had scored a couple time on him but not to his fault. He walked over to the bench, Kaden put his arm around his shoulder and told him he did a great job and should be proud. His big heart always gets me.
Posted by Kayla South at 11:02 AM