Our final port day had arrived and we were starting our day off even earlier than the day before as we had a 7:30 departure from the boat scheduled which was pretty much as soon as we docked. We got up and around, had some breakfast and then enjoyed the view as we pulled into port. 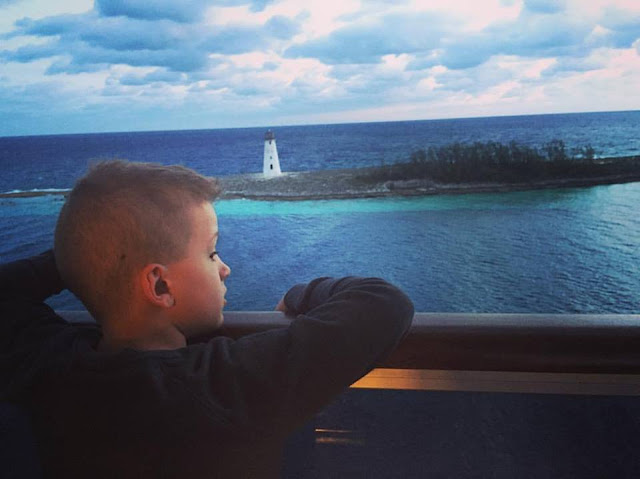 The boys were so amazed by how the captain was able to maneuver the boat. Frankly, so was I. We literally ported between two other large cruise ships and although I couldn't reach out and touch the other ship, it sure felt like I could. 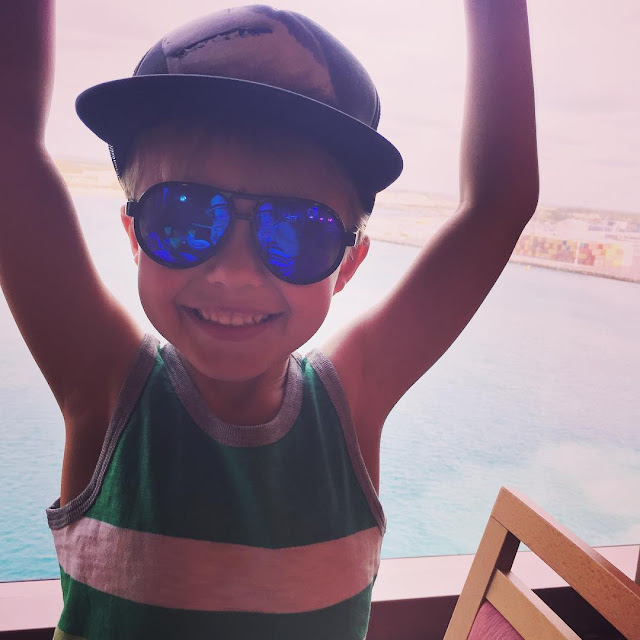 The line to get off the ship on this particular morning was a little longer than previous days. We actually had to meet in the main theater since there were so many of us going to the same location--the Atlantis. You can head to the Atlantis and probably spend an entire day there just walking around seeing the sites and shopping but we knew the kids wanted to be near the beach and their aquatic park so we purchased full day passes to everything Atlantis. When we arrived at the Atlantis we were escorted to the aquatic area where we received out towels and then we were on our own. We located the kids area pretty quickly and claimed a couple chairs there so we could sit back, relax, enjoy a few cocktails all while watching the kiddos go round and round on the slides. 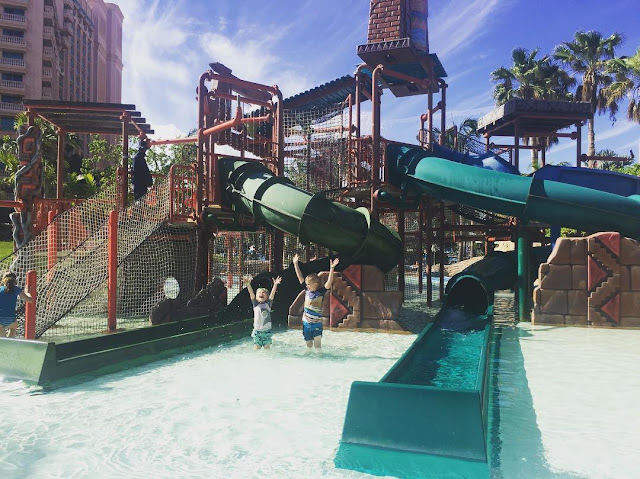 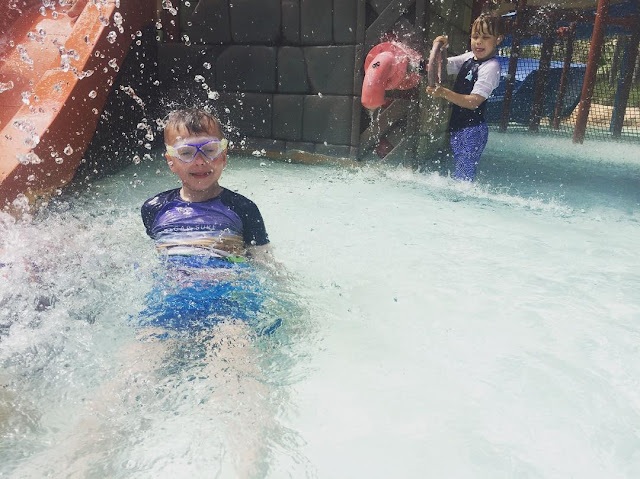 The kids area was perfect, their was a height limit and the stuck to it, thankfully Kaden wasn't too tall but if we go back next year, he may just be. To the left of this large waterpark thing was a large pool that was about 2.5 feet deep, perfect for the boys to play and play and play. 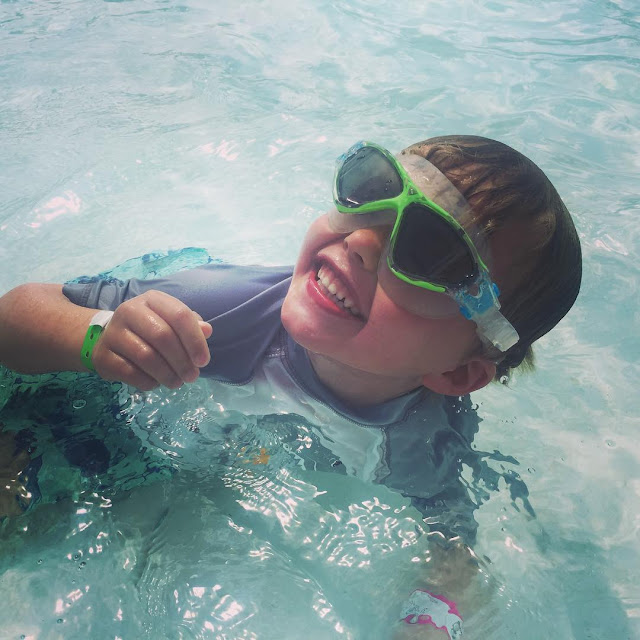 Since it was a kids are the boys had to get out of the pool a couple of times to have the PH checked so when that time came we all jumped up and walked across the grounds to the Rapid Rivers. They were asking for the lazy river but since that was a much farther walk I just told them what we were going on was the lazy river with a few waves. They jumped on, Logan with me and Kaden with Justin. The water was a tad chilly and I got a nice ab workout from Logan sitting on my feet but my abs weren't the only thing hurting. My face hurt from smiling so much. Hearing the giggle and laugh and squeal in excitement was everything. I think we ended up going on this 3 other times-boys loved it.

We also took a break for lunch and after we were done eating I told the boys we could check out their beach. The waves in the Bahamas are a little more intense than what we had in St. Maarten but that didn't stop the boys, I just said they couldn't go out where the water was above their waist. 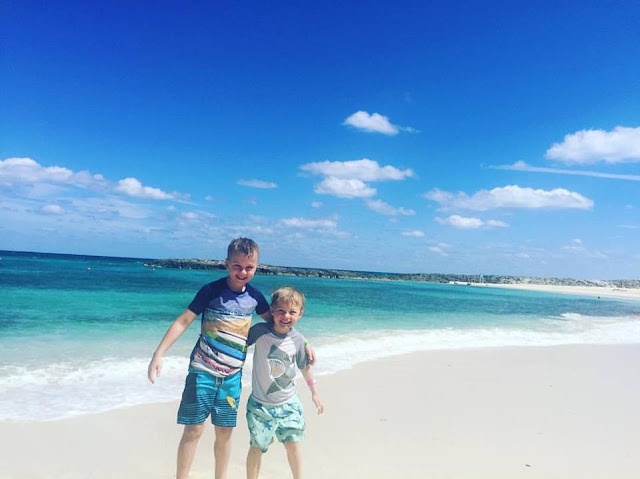 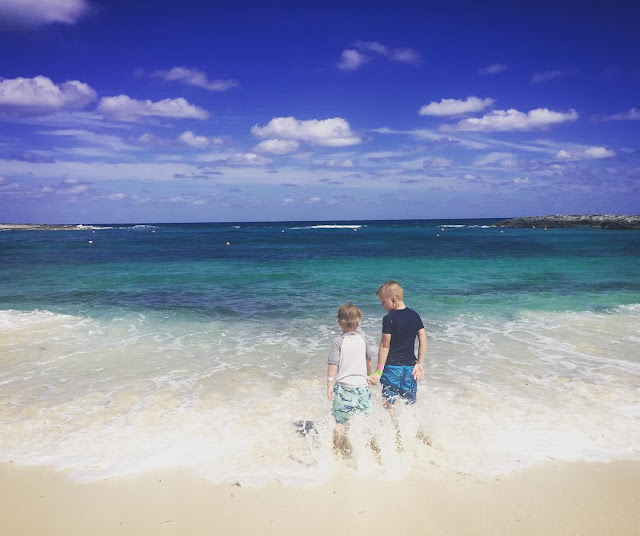 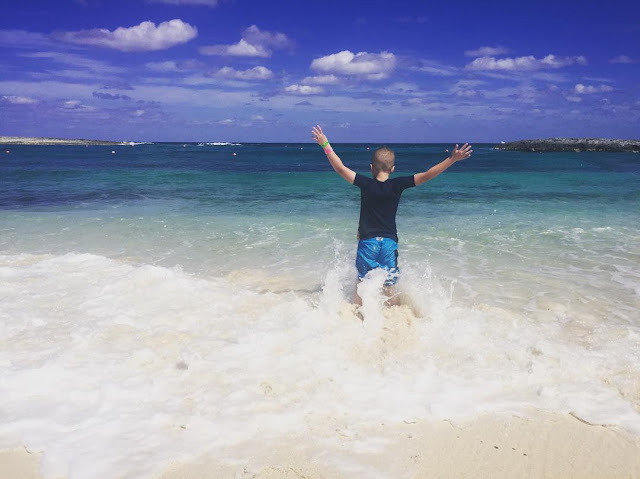 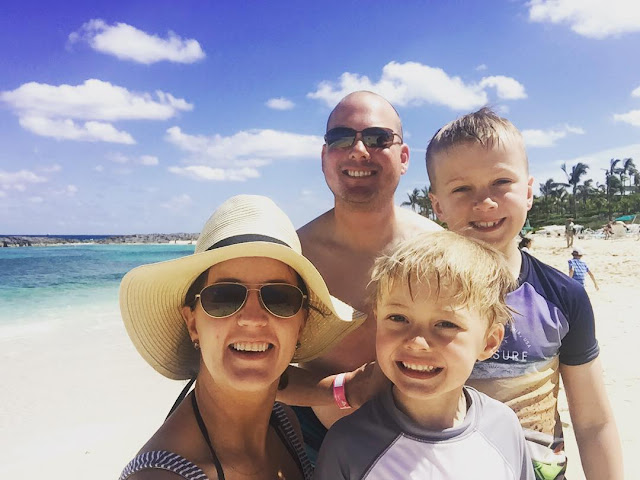 Our selfie game was lackluster at best. 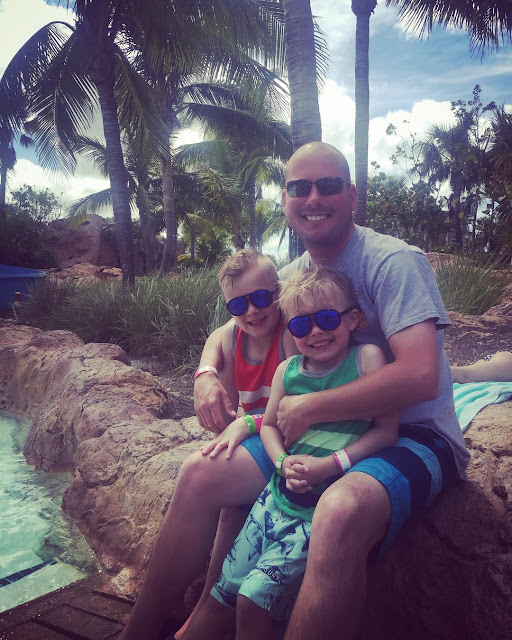 We found our way back to our lounge chairs where Justin and I assumed our position and the kids went back to doing what they do best--burning energy. Sadly, about 20 minutes in they had everyone get out of the pool, a small kiddo had pooped in the pool & thus they closed it and after about an 45 minutes (we went back to the Rapid Rivers), we called it good.

On the way out we took the boys through the aquarium. We saw sea turtles. 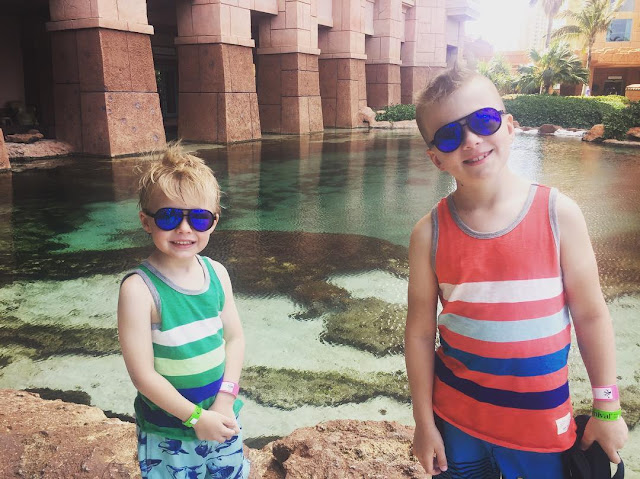 We got to see sharks, stingrays, fish--it was pretty amazing. 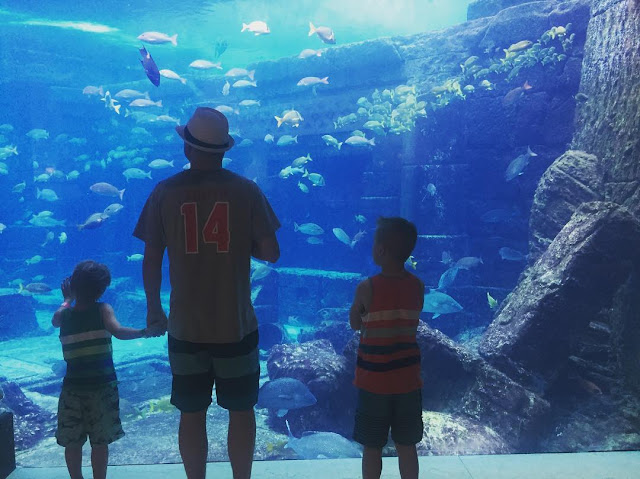 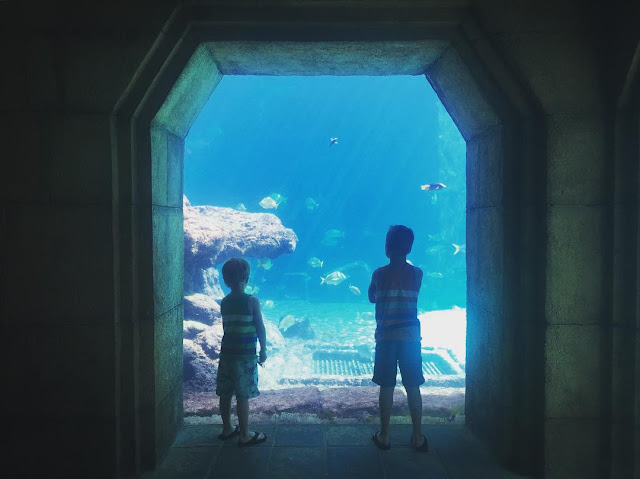 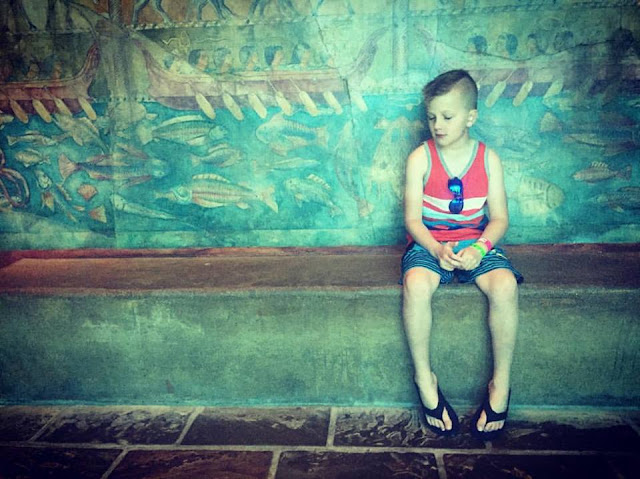 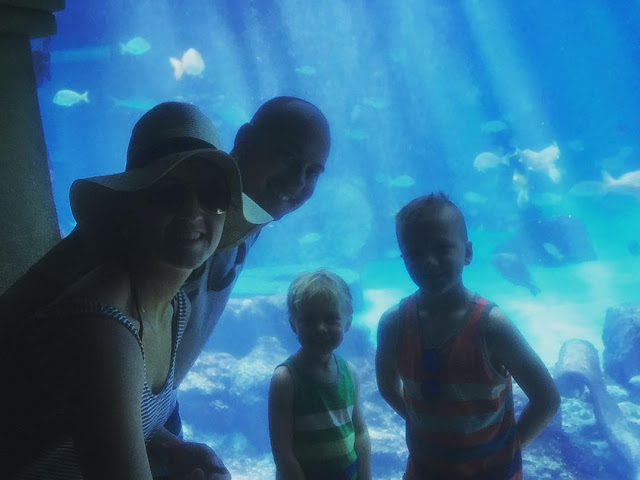 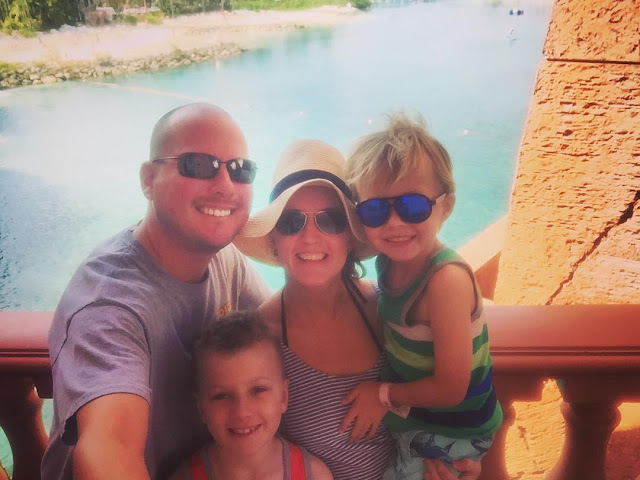 And on the way out we stopped in front of this sculpture. Justin and I stood in this same spot about 10 years prior--newly engaged, me a lighter and he had more hair. We couldn't miss the opportunity to take a quick picture so we could compare the two and see just how much our life has changed and in all the best possible ways. Here we were with our 7 year old and 5 year old, or if you ask them, our 7 1/2 year old and almost 6 year old. A 7 1/2 year old that is about as tall as I am. In some ways it seems like so long ago but then time has flown by when it comes to these two growing up. 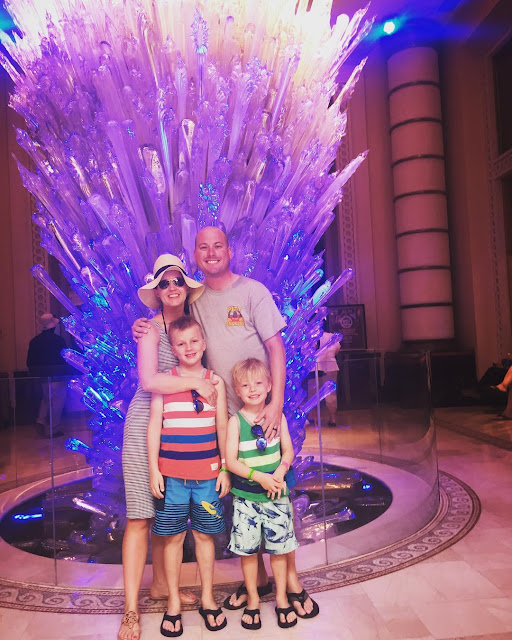 We eventually wrapped our way around to the shuttle pick up and Logan climbed into Justin's arms as we waited for our turn to board. He was asleep before we even took off. This picture is everything to me. 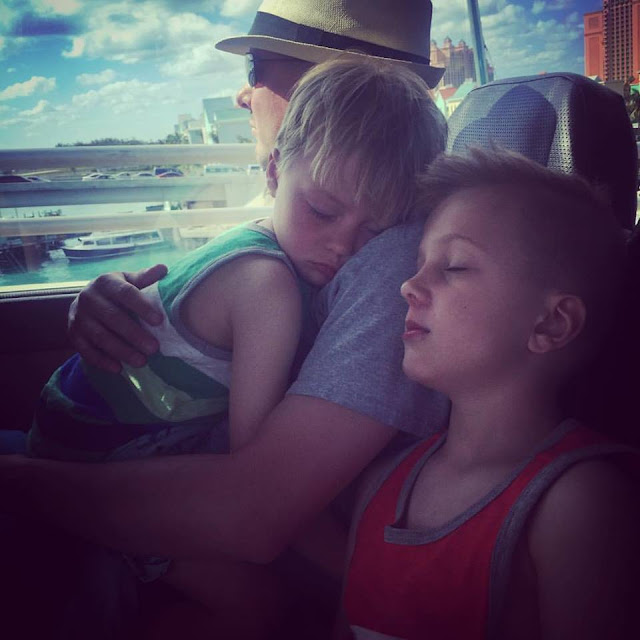 We did a little shopping before boarding the ship again, a few trinkets for the boys & one last Kalik for Justin and then we found a very nice young woman to take our picture as a family in front of the ship. 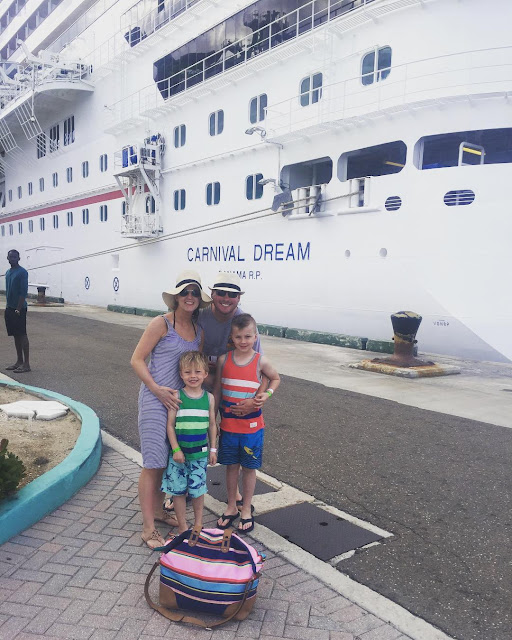 It had been one extremely long day and we were all very tired. We had the best of intentions to make it to dinner that evening to see our dear Louis but once we all laid our heads on our pillows we were all out. Next thing we knew it was 6:50 and we had missed dinner, thank goodness for the buffet.

Two thumbs up for Nassau and the Atlantis, we will definitely be going back if we ever have another port day there. 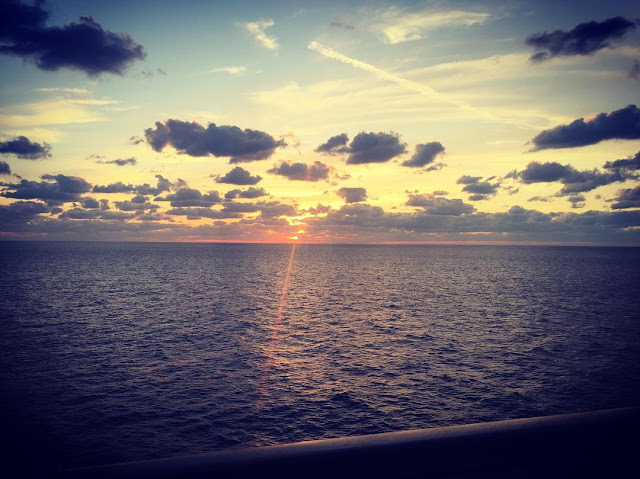