This was our first port day. We were porting for most of the day in Key West, FL and had a pretty cool surprise up our sleeves for the boys on this particular day. Bucket list kind of cool but we had a little time to kill so we decided to let everyone else get off the ship first and while the mad rush was happening we would let the boys enjoy some pool time. They boys had to be a little patient as we waited for the water to be tested but soon enough they were in having a great time. 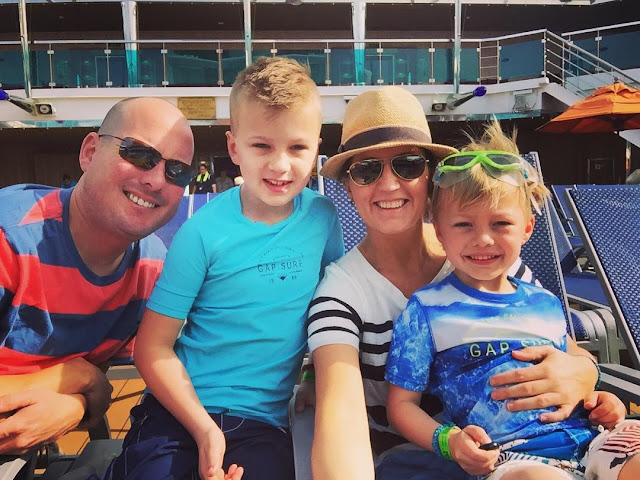 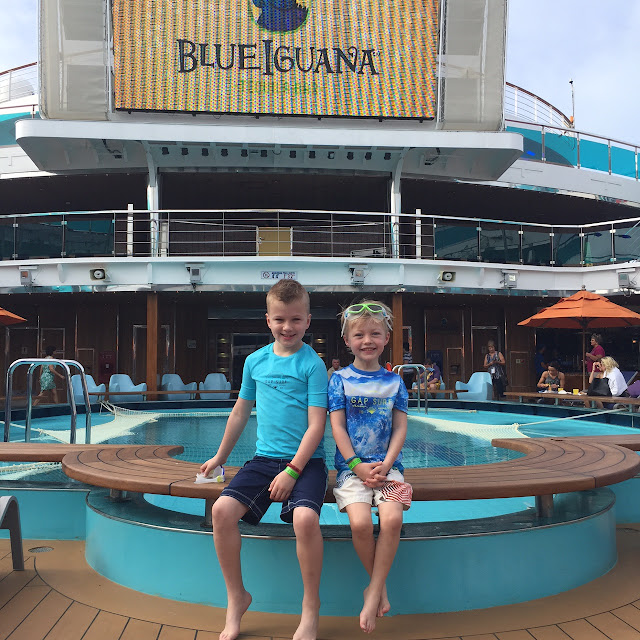 Once the boys were done swimming we decided to head of the ship too. We had about 2 hours or so until we needed to meet for our excursion so we decided to check out some of the local sites. This was also the first time that we got to see just how big the ship really was. 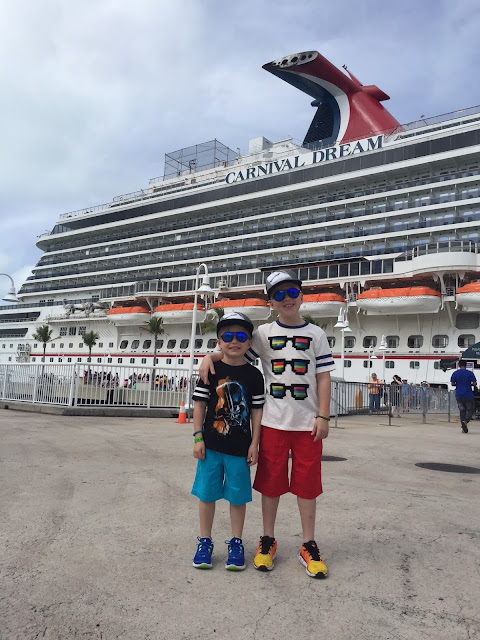 Once again, decked out in Gap & these adorable aviators I found on Amazon for super cheap, even cheaper now. They are polarized, come in lots of different lens colors and are pretty indestructible. And can bend in any which way. You can find them here. 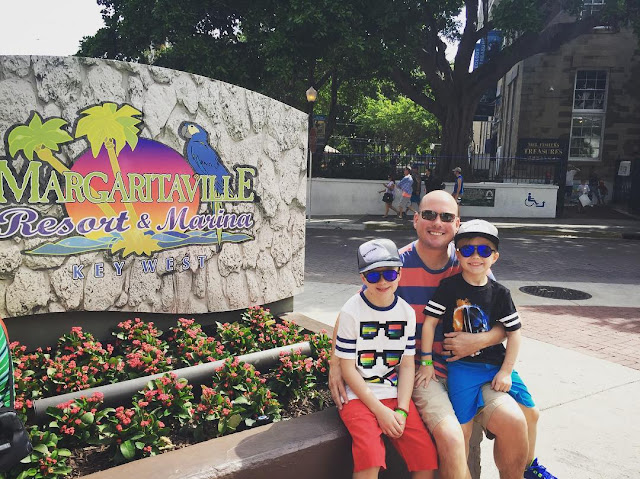 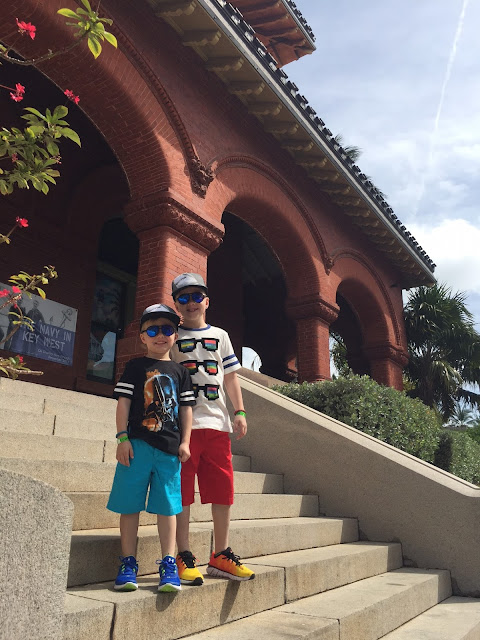 & when in Key West you have to try their Key Lime Pie, after all that is their claim to fame. Kaden was a fan but Logan, well, we can just let the picture say it all. 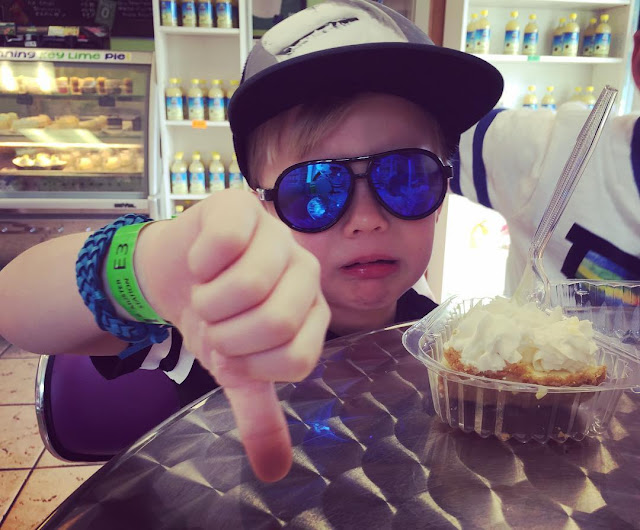 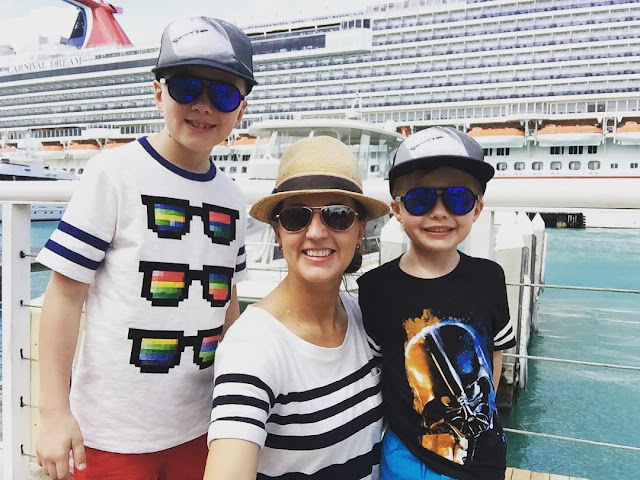 Our two hours were up and it was getting close to time for us to meet up for our excursion so we headed back towards the ship. I had told Justin that I had a funny feeling & wanted to get there a little early in case something was wrong. It was a tad windy and honestly, this was our first attempt at an excursion and I just wasn't feel 100% confident in the directions we were given--even after calling on it and clarifying a few things.

So we show up for our excursion. Meet time-12:15, departure time-12:30, actual time-11:50---ship time, not Key West time. We were about 20 minutes early but as I approached someone with the ship's excursion team and asked about our excursion he stated that it had just left. That they had everyone in their group and so they left early. Justin immediately stated that they didn't have everyone as we were standing right here and we were 20 minutes early. I pulled out our tickets, clearly stating 12:15 and 12:30 and they immediately got on the phone trying to get a hold of the excursion provider. In the meantime they asked us if we wanted to wait and go in the second group and I explained that we did not, we had little kids and the day was built around their schedule to ensure they would get lunch and dinner on time. Justin was heated, rightfully so, and I basically told them that they could either come back and get us or they could get us a car to the excursion site. Finally they reached the excursion group & had her check everyone's tickets and sure enough, a family of 4 had tickets for the 2:00 departure and took our place. They kicked them off, told them to wait and came back for us. We departed at 12:30, on time.

We didn't keep it a surprise from the boys all day as we wanted them to be able to ask any questions they needed. I was a little worried about Kaden as he doesn't like loud noises and he is a little more apprehensive and at first he didn't want to go. I explained that this was a lot like an airplane but cooler and that we were going to fly over our cruise ship and see cool things in the water, he was on board, as long as he could ride with me. So it was going to be Kaden and I and then Justin and Logan. Then we found out that there would only be 3 flights, 9 people total, 3 flights. That we could either as the other groups to split up and we could then ride two and two or one of us would ride with the boys as the other went with another group. Justin took one for the team as we didn't want to ruin anyone else's experience and he rode with strangers, sending me with both boys.

The boys and I went first. This way the noise was limited because it wouldn't be started until we were inside. 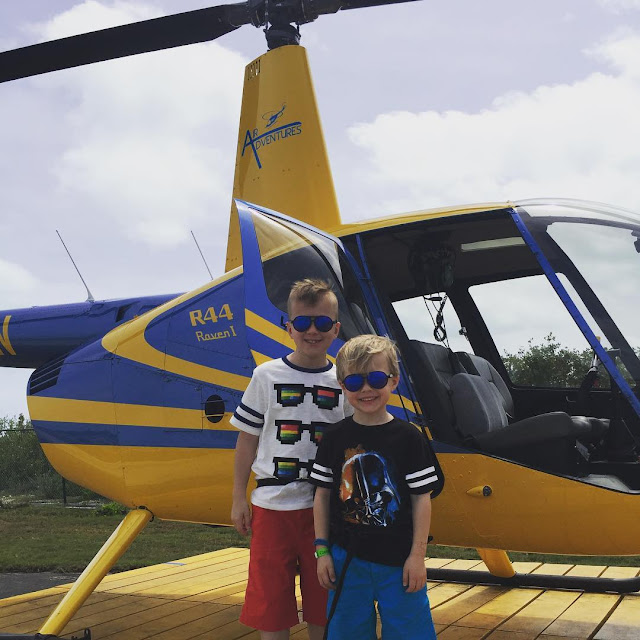 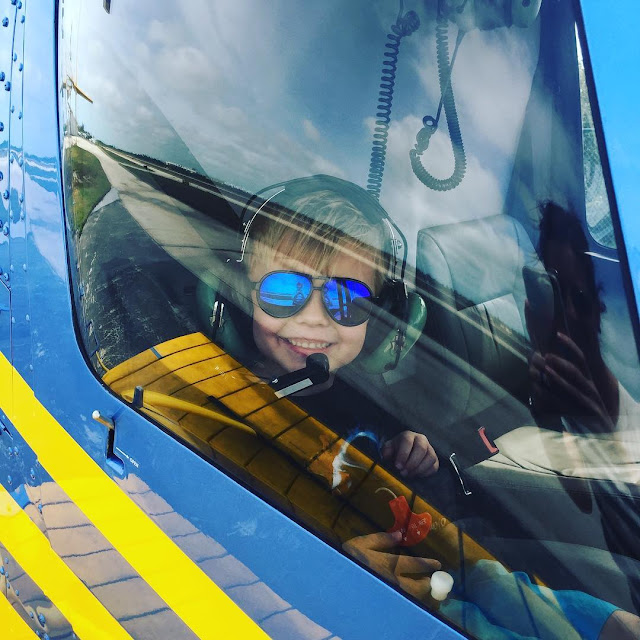 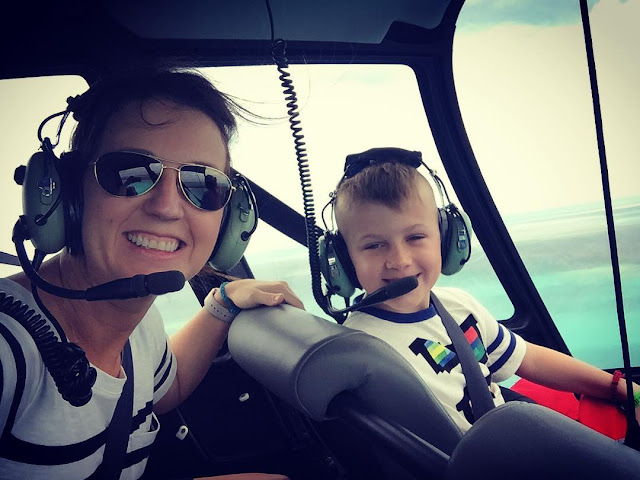 The boys were all smiles and while I was so thankful that I could experience this with them, I was also very sad that Justin wasn't able to.

My favorite part, hearing the boys chatter back and forth about what they were seeing through their headpieces. Our pilot thought they were pretty cute, I'd have to agree. At one point she needed us to be quiet as she radioed in for departure and arrival and the boys were as quiet as they could be but Logan let out a little squeal of excitement and air traffic control started laughing too.

They loved seeing our ship from the sky, mini-golf and the slides they were going down. We saw ship wrecks in the ocean and the southernmost point of the US. 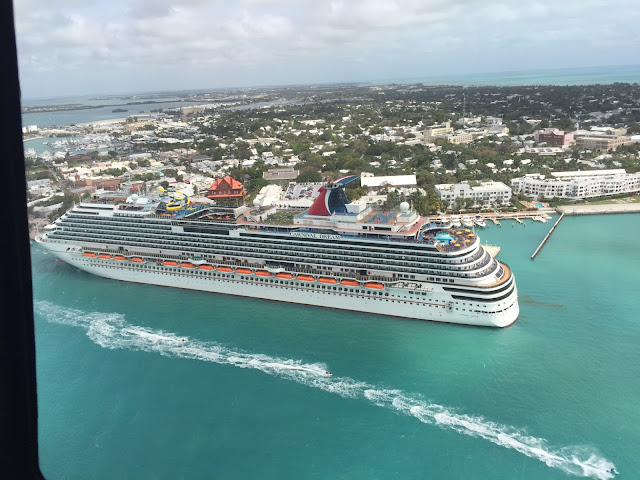 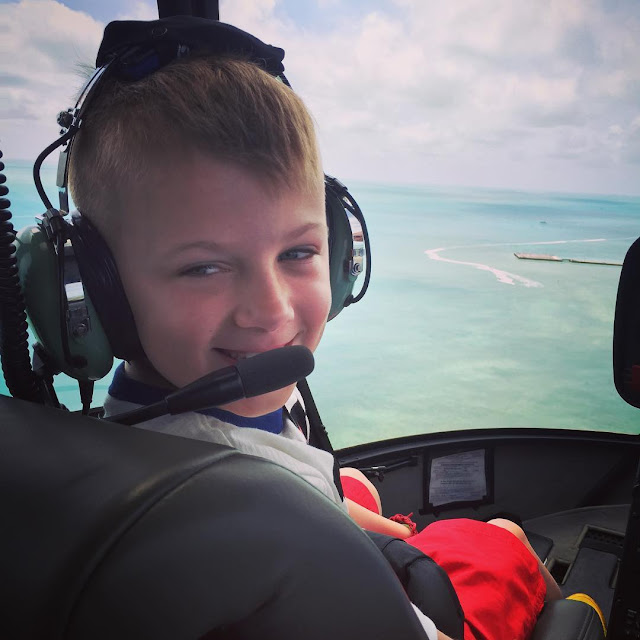 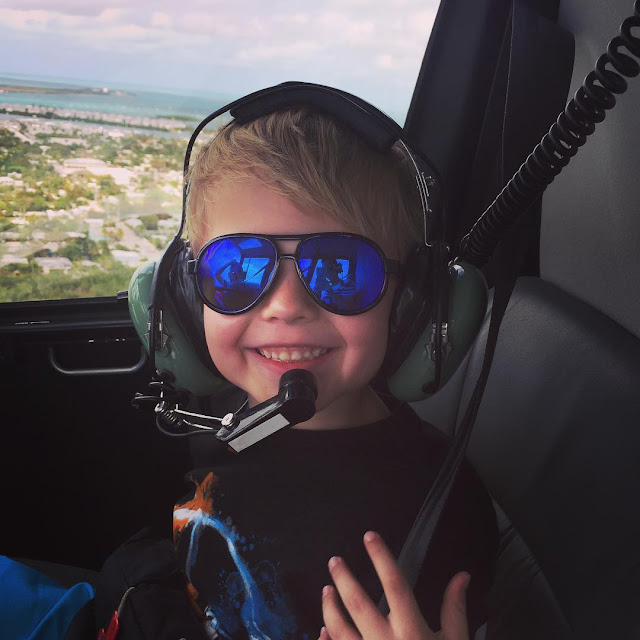 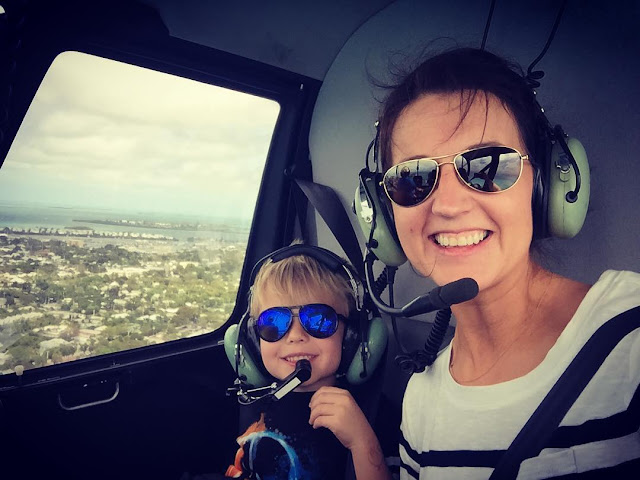 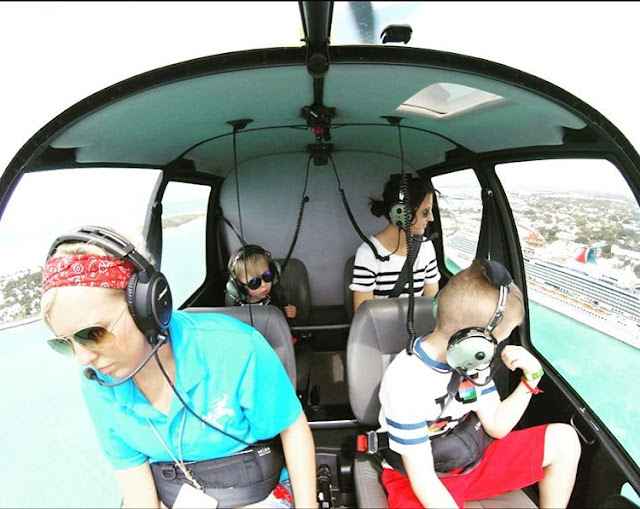 The ladies at Air Adventure Helicopter Tours were so wonderful with the boys. They also gave us our video and picture package for free, for both the boys' and I's ride and then for Justin's ride too since we got separated.

After we landed safely back on the ground, Justin's group was up next and they took a moment to take a picture of us all in front of the helicopter before he took off. 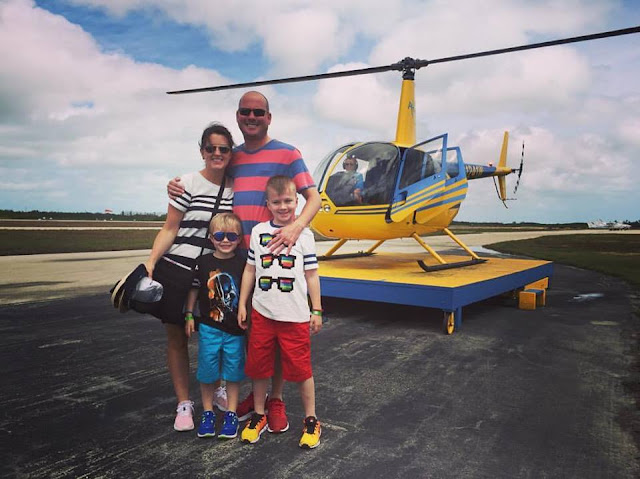 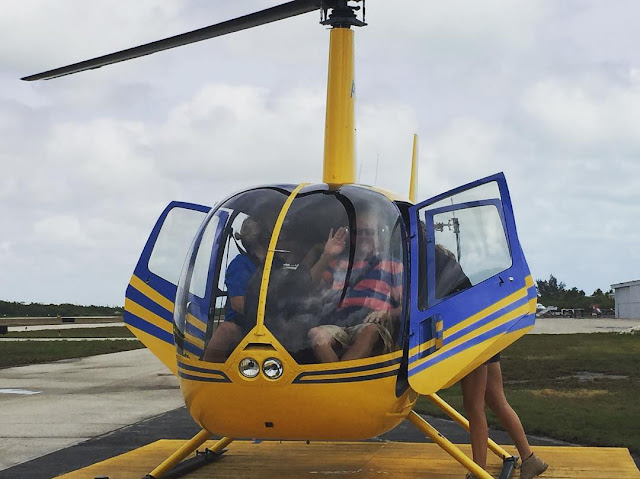 I quickly gave both our moms' a heads up that we were all safely back on the ground before heading back to the ship. The boys loved their time in the air and we were so fortunate to have been able to give them that experience---one of the many pluses to cruising with Carnival, we could go all out with excursions.

When we arrived back to our cabin there was a little surprise waiting for the boys, actually two. One being the cool frog that our dear friend David left behind, the other being two Cat in the Hat plush stuffed animals and the Cat in the Hat book. Since Carnival does Suess at the Sea and Logan loves stuffed animals, we thought this would be a great souvenir for them. 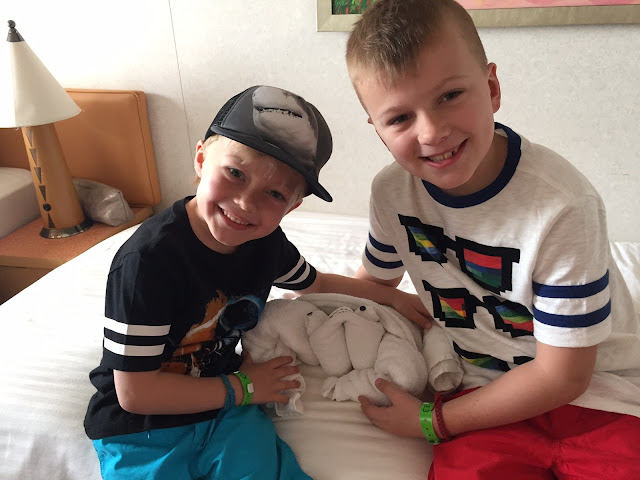 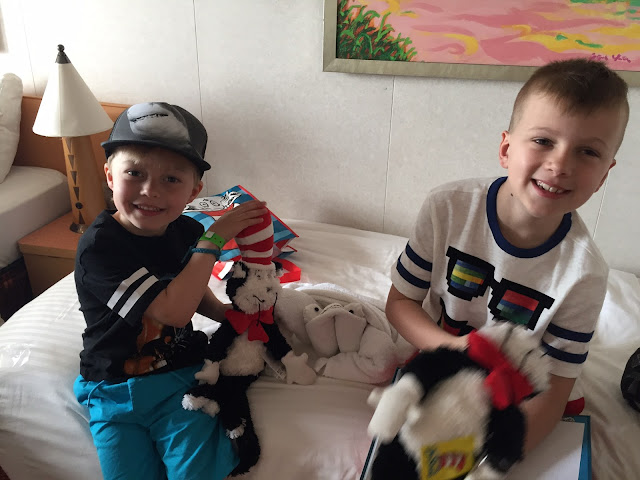 Logan wanted to carry that Cat in the Hat around everywhere and for the most part, we let him. We took a quick rest, got cleaned up and then we headed to dinner and ended the night with a little mini-golf and of course an ice cream cone. 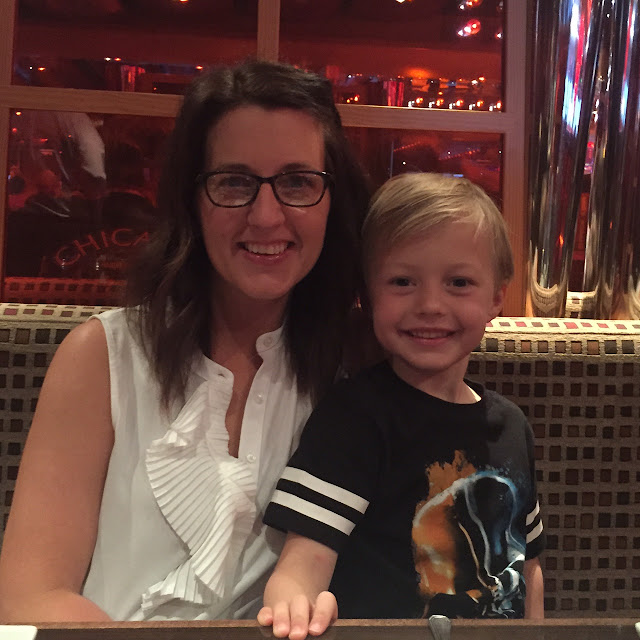 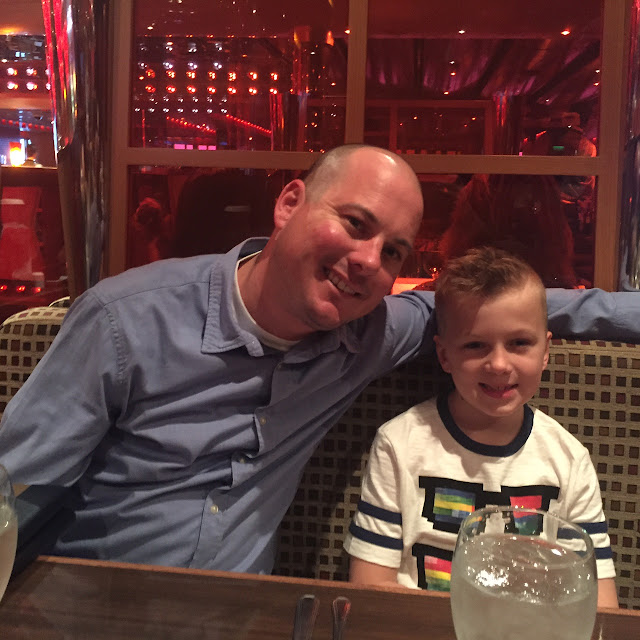 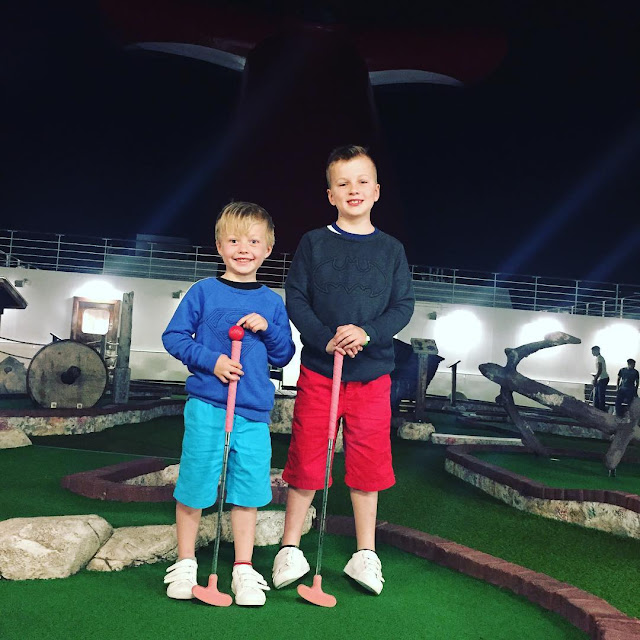 What a great day in Key West. 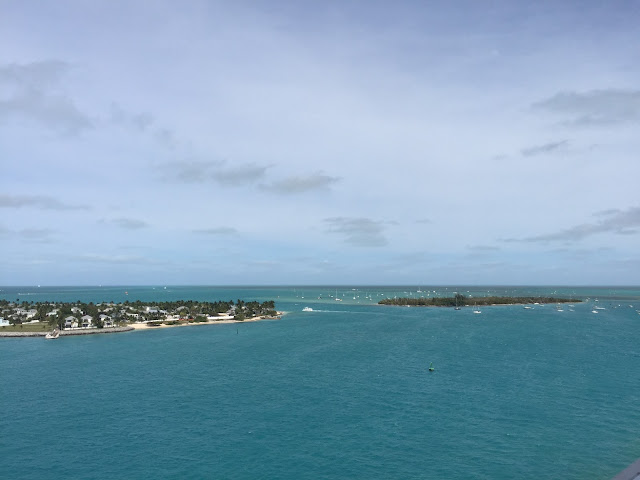