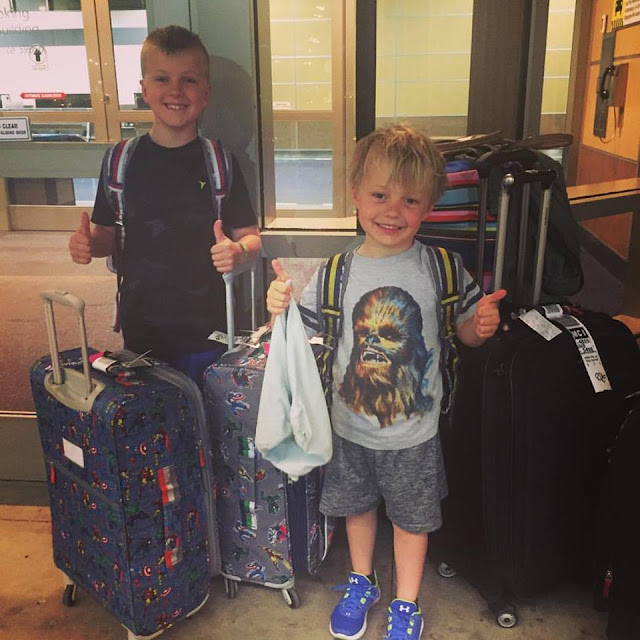 The boys give it two thumbs up. Mom and dad would agree. We had such a wonderful time together as a family & although some might look at Carnival as the "economy" cruise line, it had EVERYTHING we needed & more.

Booking
From start to finish it was easy. & that is what we were looking for. I was able to sure their website to answer most all of my questions and for the ones I couldn't find answers to, I called. I never had to wait long to speak with someone and they were SUPER nice and very informative. Carnival offers the ability to check-in online (I'm sure most cruise lines do) which we took advantage of and pre-selected our boarding time making our boarding process so incredibly smooth with hardly any wait at any point in the process.

Excursions we did through their website too. Instead of trying to do it all on our own, we booked through Carnival. We knew that if something went wrong or if the weather was bad, we would be entitled to a full a refund. Not to mention they took care of the travel arrangements to and from the excursions. Their website was very user friendly, it allowed you to browse by age of the kids, by highest rated, by destination--so many ways to find the right excursion for your family. It also allowed you to save your favorites and then compare them. My favorite part of their excursion online booking process are the reviews from previous cruisers. We were headed on a helicopter tour and although it stated our youngest would be able to do it, it was nice to see that others had taken their young kids on it and they had enjoyed it too.

Room Drops--prior to boarding I had ordered water, beer and vodka to be delivered to our room. We could carry on Red Bull which would allow me to have my drink of choice for the cruise by using the vodka in the room. I'm not a big drinker so the all you can drink pass for alcohol wasn't a great idea for our family as both adults would have to buy it. We also were able to set up having a couple Cat in the Hat stuffed animals to be delivered on a specific day for the boys. We returned from a port day and there they were, allowing it to be a wonderful surprise that Justin and I didn't have to worry about.

Airport Transportation-I didn't book transportation to the port but I did book it for once we returned to get us to the airport. Once again, easy. We got off the ship, walked through customs and there was our bus waiting and off it took. It was cheaper than an Uber would have been and the boys enjoyed the big bus that we got to ride on, it was like super clean too.

What would I do differently--sign up for the Faster to Fun Pass before anything else. For $50 per cabin it would expedite your arrival even more and although we didn't have to wait long, these guys had NO waiting.

Packing
We packed WAY TOO MUCH. Like I had 5 more outfits that I could have worn, too much. Same with the boys, too much. Although we each only had one suitcase, we probably could have come with less. We wore our suits way more than we expected-imagine that, right! And I wore a couple pairs of pants multiple times too.

We packed a couple a touch lights that came in handy for the boys that we will totally be taking on our next cruise again. The one thing that is lacking in the cabin, outlets. I would either bring an extension cord to have a few more power outlets or a charging station of sorts so that Justin and I both could charge our phones and watches. Outside of that, I didn't feel as though we were missing anything--just had too much stuff.

Service & Cleanliness
The service was fantastic. From the waiters on the pool decks to the kid's activity leaders to the waiting staff at the dining hall--it was all SOOO great. When I was booking our reservation online it asked if we would be celebrating anything while we were with them and I stated yes, our 9th wedding anniversary which was St. Patrick's Day. So David,our cabin steward, presented us with a gift card to their spa on the ship and Luis, our head waiter, celebrated our anniversary with a special dessert. Everywhere we went the staff was full of smiles and always so friendly with boys. The ship was clean. The food was pretty darn good.

The Fun
We were on the Dream. The Dream had a waterpark facility, 4 slides & a kids splash zone. It had an arcade (where Justin and I both were determined to win a prize and never did). It had a mini-golf course. Multiple pools. Ocean Club. Guys Burger Joint. Sushi. AMAZING pizza. Nighttime family movies. Bingo. And lots of other things that we didn't even get to experience (mainly because the boys were exhausted and we had early morning starts) like the comedy club, karaoke, talent shows, performing shows, night clubs...

There was always something to be doing when we were on the ship. We never got bored.

The Cabin
We chose to get a balcony cabin this time. Justin and I had been on one cruise before and we stayed in a cabin with a port window at the back of the ship. Justin got seasick on the last two days and honestly didn't feel all that great the entire time, but those last two days he hardly came out of his room. This time we went for a balcony and although we didn't spend a ton of time out there, it made the room feel so much large. We could get some fresh air while we were getting ready. As we docked each morning at our ports we could watch the arrival. Was it huge, no but we didn't spend a ton of time in there either. Again, it was everything that we need. Best news, Justin didn't get seasick at all. Granted he had gotten a patch from his doctor prior to leaving which I am sure helped out tremendously but he was able to see where we were and what was going on and that did a lot for him too. The boys, never mentioned being on the water or feeling weird. They loved their bunk beds in the cabin and those beds provided so much more space for us. Each kiddo had their area and could kind of get out of each other's way when needed--and it was needed.

Would we book again?
Absolutely. In fact, we are looking at the calendar and the destinations and trying to figure out when we can take another trip. It honestly was one of the best vacations we as a family have been on. The boys loved everything about the trip. The boat. And everything on it. The port days. And everything we did while there. Logistically it was so very easy to book, to board, to depart. Yes, it maybe isn't the top of the line when it comes to cruise ships but what we saved with going with Carnival allowed us to do more with excursions & to cruise longer. And yes, it may not be Disney but Carnival totally caters to families too with their Dr. Seuss at the Sea theme, you even get to meet a few characters. So yes, I would totally book again and I wouldn't hesitate for one second when recommending Carnival to someone else. Honestly, if you are on the fence, book it, you won't regret it.