We hadn't been home in a few months, and by home I mean my mom and dad's. As weird as it may sound, SW MO will always be home to me. Now this doesn't mean that I don't feel like KC and the home I have here with Justin and the boys isn't home---it completely is, it's just a different home. Anyways, the Souths had not been home since Christmas and it was time to head south, as in Arkansas south and spend some time at the lake with my sister and her kiddos. While we were in town we would celebrate Blake's 13th birthday & Lindsey was going to bring Madison and Trenton down so we could all enjoy the children's museum.

Arkansas is a good three hour trip for us so first up was a stop at Grandma Sara's and Papa Tom's for a quick potty break--and a ride on their new toy. Somehow both boys managed to get Papa to let them drive it, I covered my eyes. 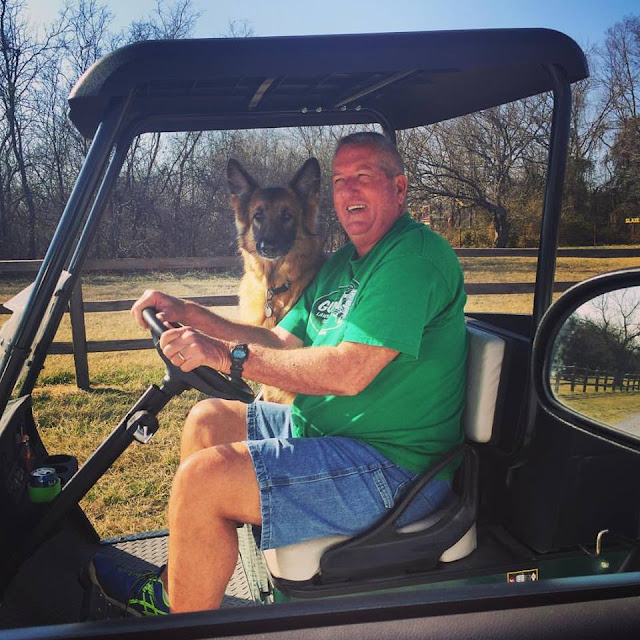 About an hour after we left we made it to Arkansas. As soon as we walked into my sisters house the boys and I got busy with helping Blake reorganize and decorate his room which was once his older brother's room. As were got to moving things around the boys found the XBox and that is where they spent their entire weekend. They were in heaven and hey, on a little vacation too so I didn't mind too much.

We were pretty much spoiled the entire weekend, the boys had Blake to play with and Leah cooked some amazing meals, she's 15 and these meals could give Justin a run for his money.

Sunday we started our day at Crystal Bridges, my sister wanted to grab a few pictures of her and her kiddos while I was down. 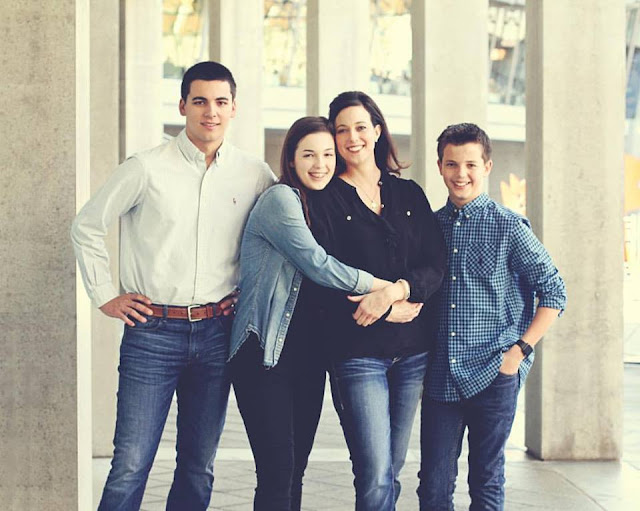 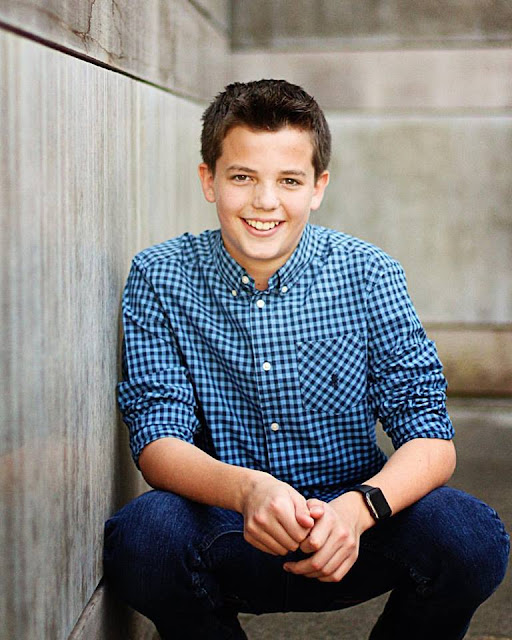 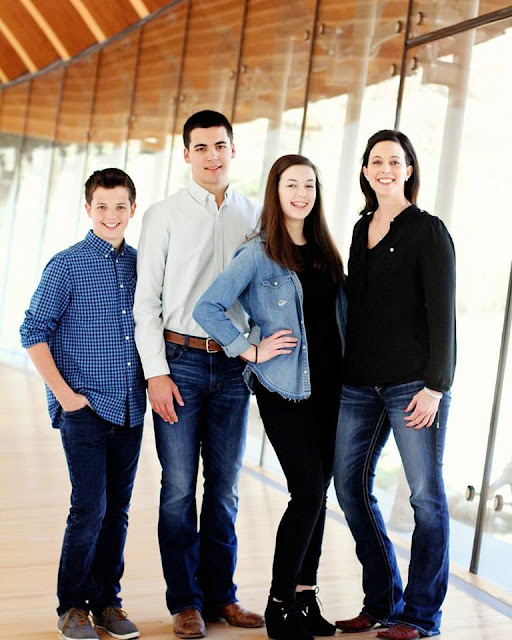 We mainly walked through the museum to find certain locations but along the way Kaden wanted to stop and admire some of the art.

The ABCs of Intestines. 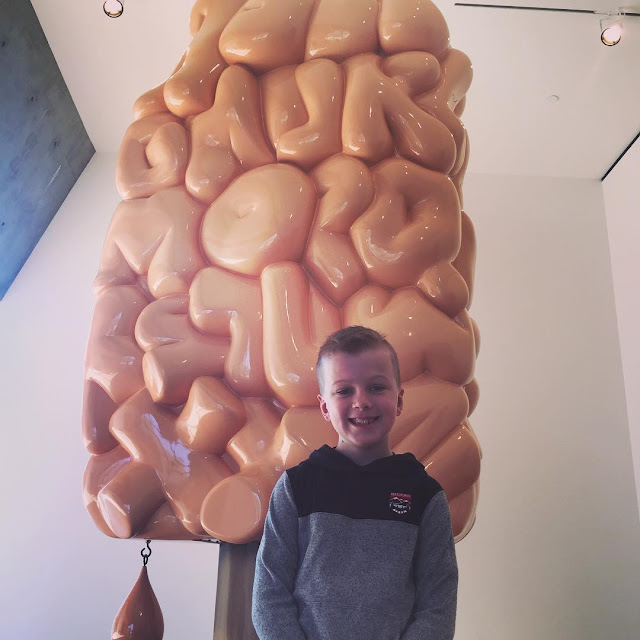 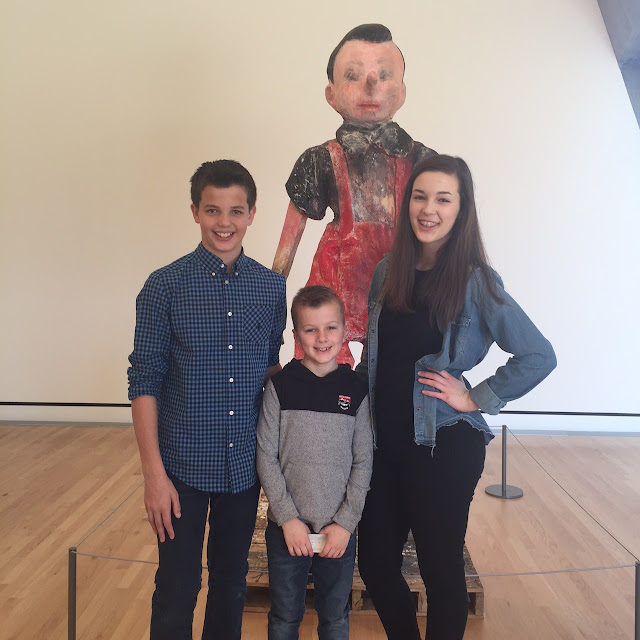 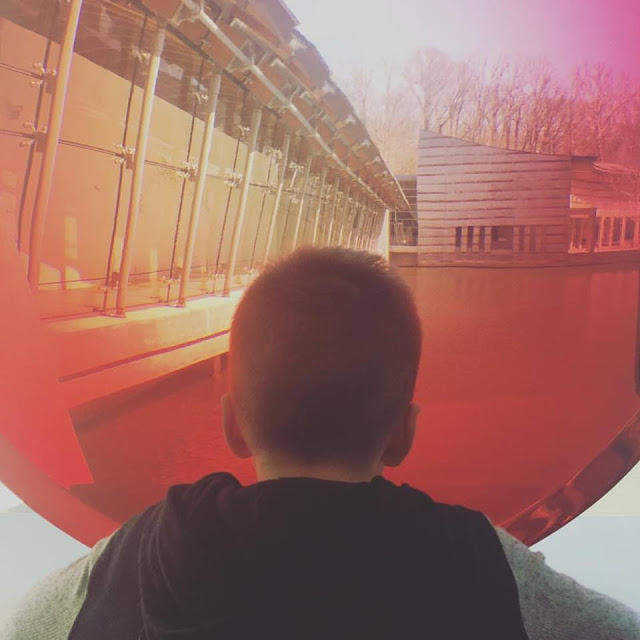 And his favorite--art that he could partake in. You got to pick up a piece of candy and then drop the wrapper on top and walk away. 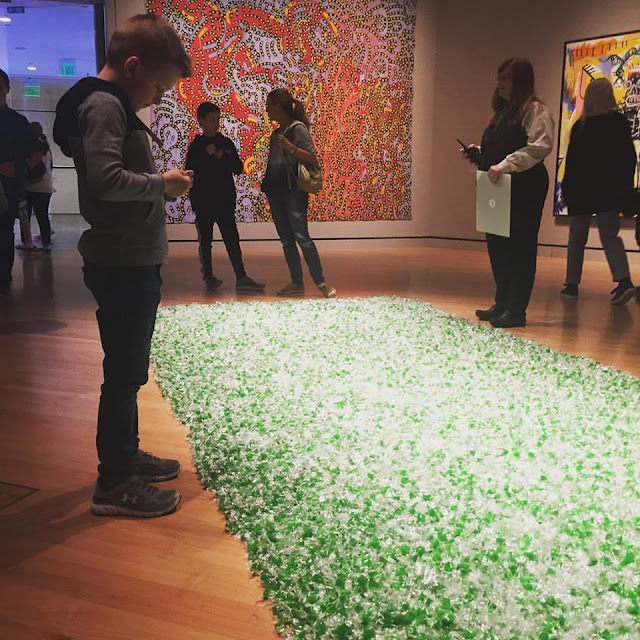 We didn't have as long as I would have liked at the museum but the kids were ready to get to the Children's Museum where they could run and play. Not to mention, where we would get to see Madison and Trenton too. They arrived shortly after we did and before heading in we made all the kiddos pose for one picture for Grandma Sara... 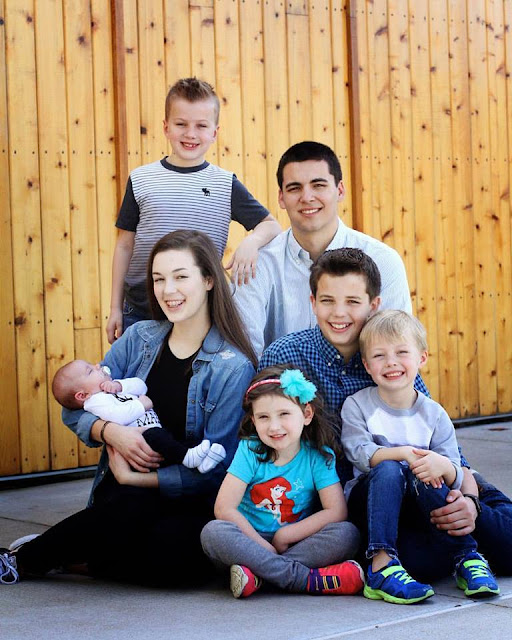 & then they were off to explore. 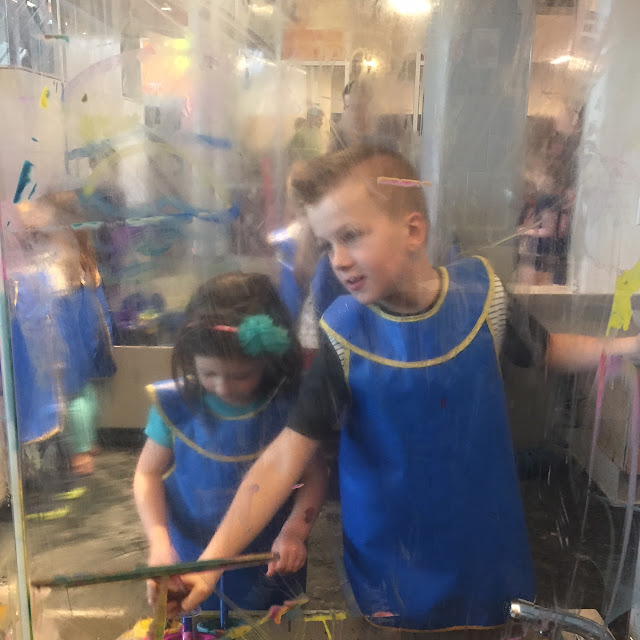 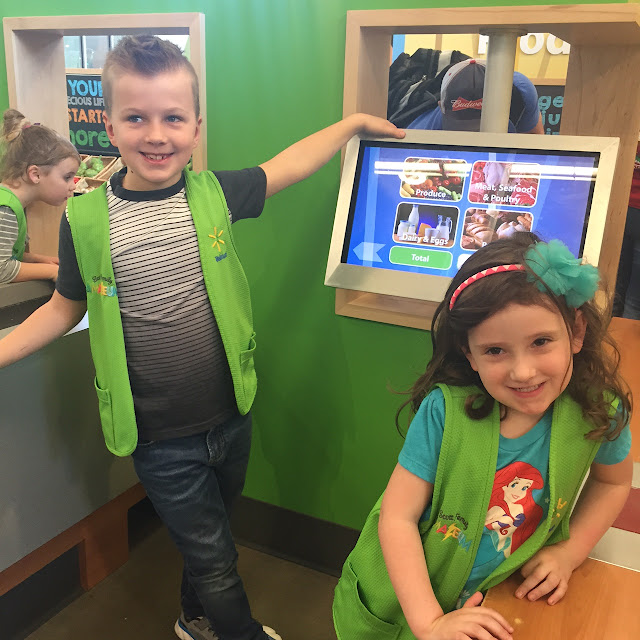 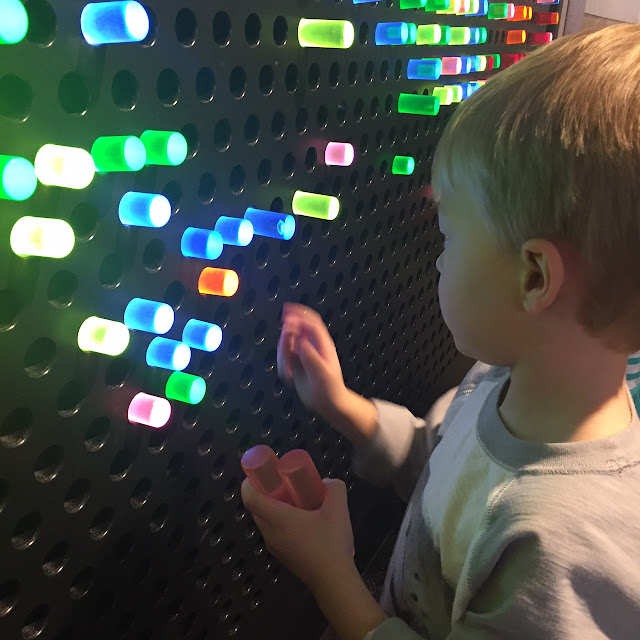 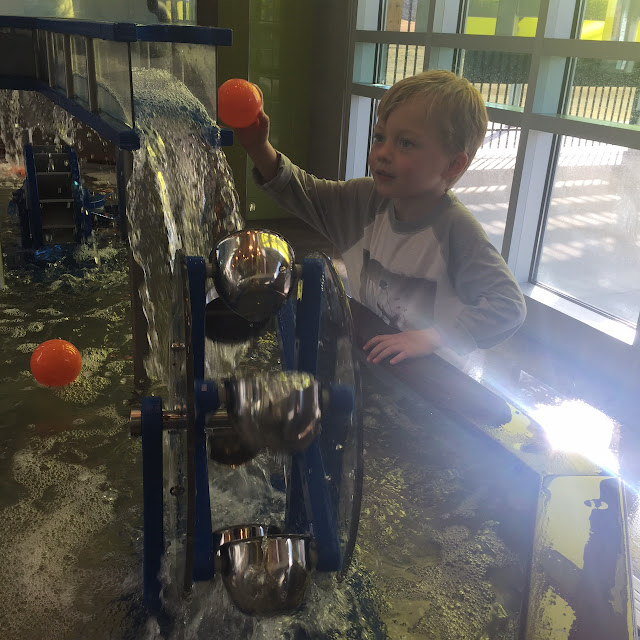 & thankfully we left the water area for last as the kids were completely drenched after playing--guess we missed that memo about aprons.

My favorites from our day with cousins-- 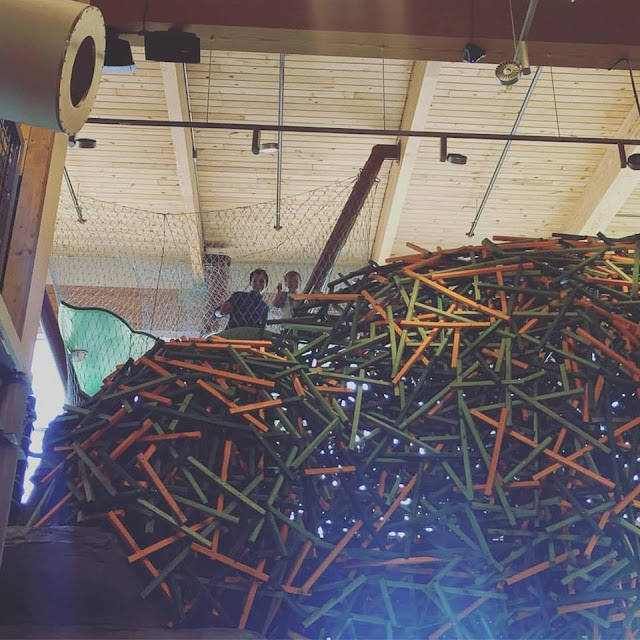 Madison looks so grown up and so completely and utterly cute here. Like a tiny little princess. 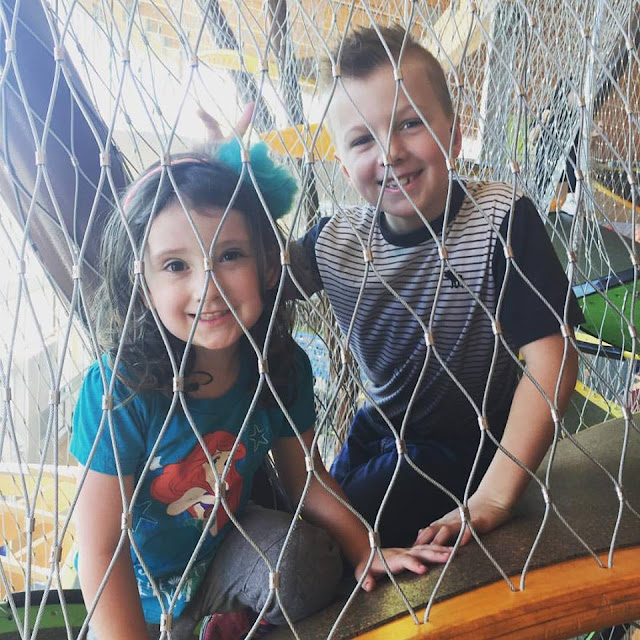 & since Aunt Jennifer wouldn't let me pay for my own kids at the museum, she sneaked in and paid ahead of time while I was taking pictures, I took the kiddos shopping and let them pick out one stoy and then a Worry Monster. Logan of course picked out another stuffed animal, his name was Ted & then Kaden had Silly Putty and Madison when with a stuffed snake. The Worry Monsters were my favorite though, they have a pouch with a zipper and whatever you are worrying about, you write it down and then stuff it into their mouth. The Worry Monster then takes the worry away for you. 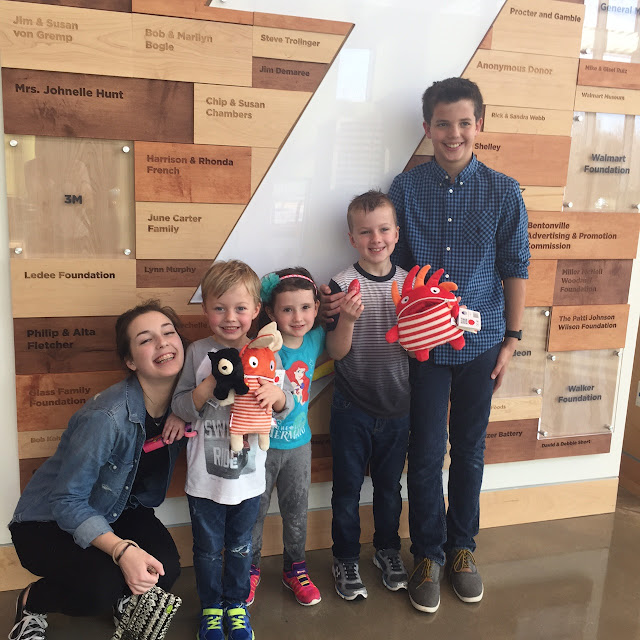 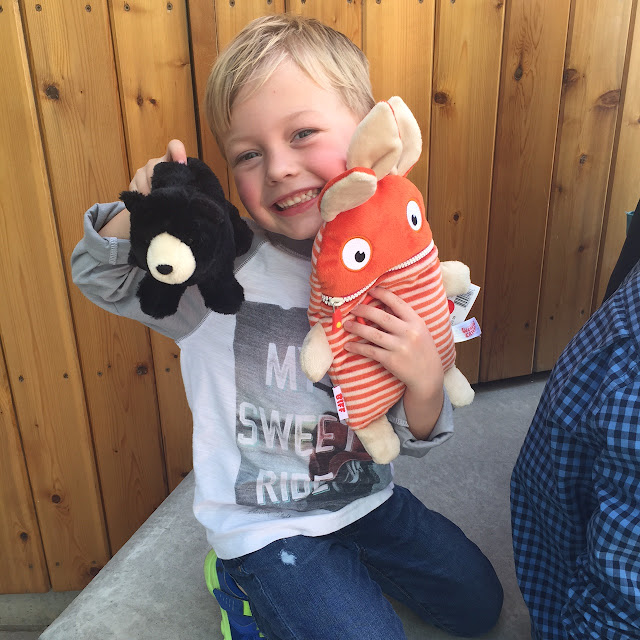 We said goodbye to Lindsey, Madison and Trenton and headed back to Jennifer's for a little rest before heading out to dinner---to the same place, and I believe the same table that we celebrated Blake's 2nd birthday so many years ago.

Sadly, after dinner it was back to the house and to bed they all went, Leah and Blake had school the next day and we were taking off for Grandpa and Grandma's house to meet their newest pup, Samson.

They boys weren't really wanting to say goodbye to Jennifer and the kids but we did and started our trek back home, KC home with a detour in Carthage. The boys were in love with Samson. Even more in love with Grandpa's golf cart. I was pretty much down and out with a cold that had been working it's way in the entire weekend so I hung with the pup while everyone was outside. He's just as sweet as he is cute. 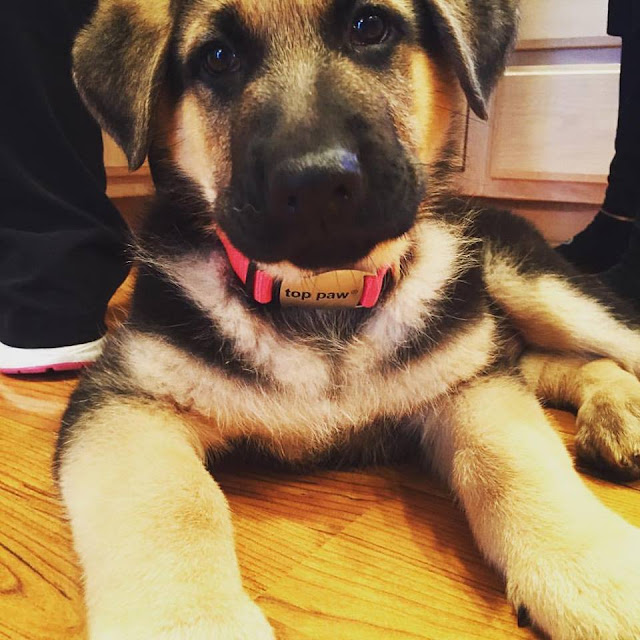 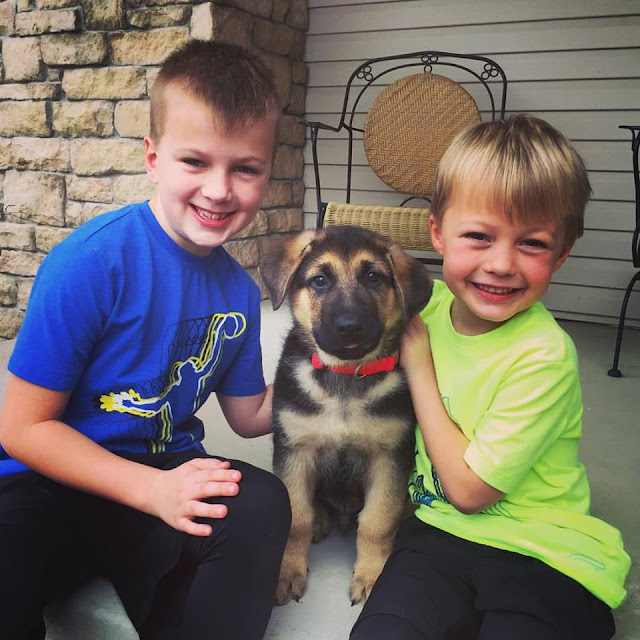 & sadly, the one thing on my list that I wanted to do while home was hold this little monster but I wasn't about to get him sick. So I stayed back & only said hi this one time, while his momma left the room & I think he missed me too as a smile immediately came across his face when I said hello. There's always next month. 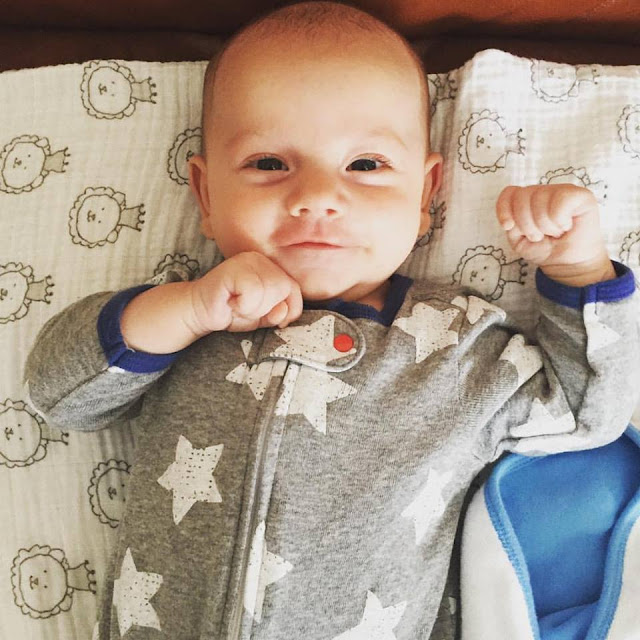