So that just happened, I turned 35. You know what else happened that day, Lego Batman movie came out in theaters. Guess which one the boys were super stoked for? You'll only need one guess. Yup. Lego Batman. & they were out of school. Parent teacher conferences. So instead of getting that massage I so wanted, I pulled my mom pants on & took them and their buddy to the movies. 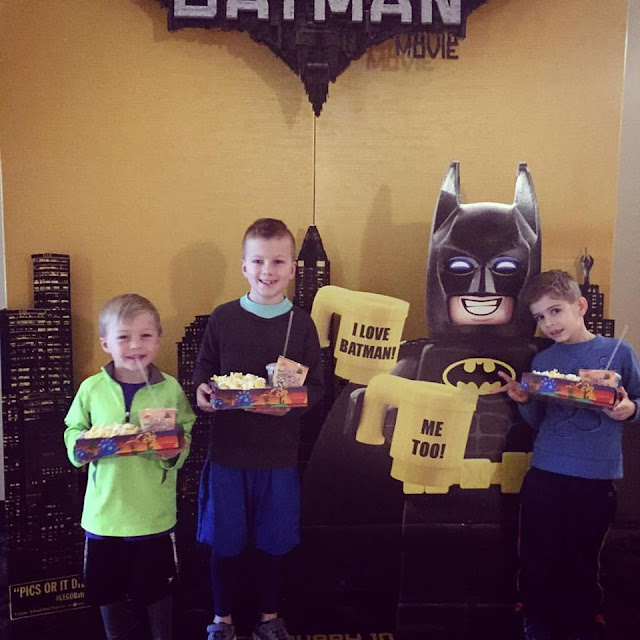 The boys thought the movie was AWESOME and gave it a 1000% thumbs up. I thought it was certainly cute but wouldn't be seeing it without them.

Next up, Grandma Sara and Papa Tom would be up to stay with the boys. It was about 1ish when we got out of the movie and for the next 2 hours all I heard was, "how much longer till they are here?". I finally had to tell Logan that if he asked again then he would be in his room until they got there. Finally they pulled into the driveway and they came baring gifts---Grandma had a card for each boy with money and Papa had tomatoes for Kaden and carrots for Logan. They both were beaming with excitement about it too.

My mom also brought up some Valentine's cookies which I stacked to create a "cake" for my birthday. The boys helped light the candles and then blew them out more than once before the song was over which led to me relighting and starting over. I can still hear Logan chuckling... 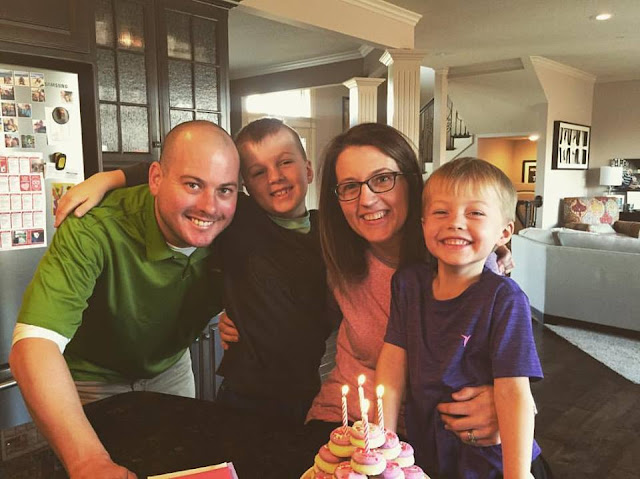 I blew out the candles, opened my cards and then the boys were off with Grandma Sara and Papa Tom. They had a special adventure waiting for them---they were going to get to meet Papa Tom and Grandma Sara's new German shepherd puppy. This little guy was 6 weeks old & now is need of a name. Kaden suggested Sam. Papa Tom already had Samson on his short list. Pretty sure they thought it was meant to be but I guess we will see next weekend when we get to visit the pup again, this time at Grandma Sara and Papa Tom's house.

Justin and I's night, well it was just beginning. Hamburger Mary's was on the docket. Little did I know that it was such a happening place so when I called for reservations, they didn't have anything until 9. We had some time to kill now. We picked up my dear friend Angela and she suggested a new sushi place by her house--we were game. We started to head out the door when she handed me one of the most thoughtful and loving gifts that I may have ever received. 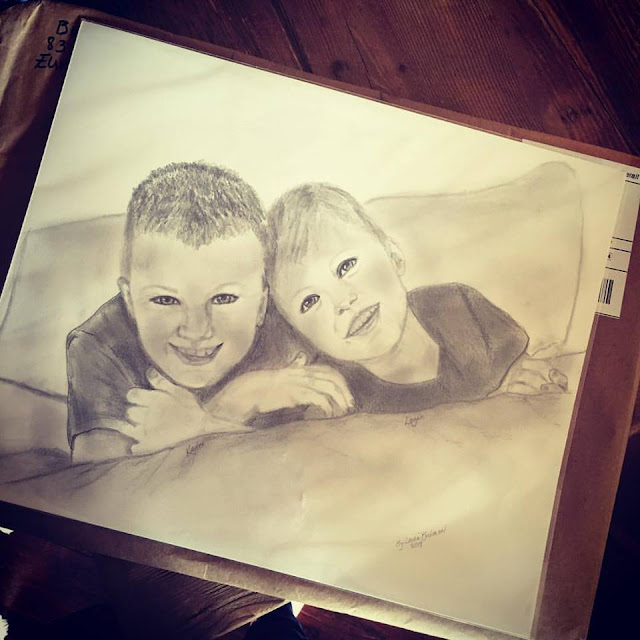 Seriously. Is this not amazing?!? Her mom did it, which makes it that much more special.

Dinner was great. I hadn't had sushi in a LONG TIME. & our company was good too. Alex Gordon and Luke Hochever were dining by us. With their wives. Alex and I share a birthday, granted, he is two years younger than I am but still good company to have! 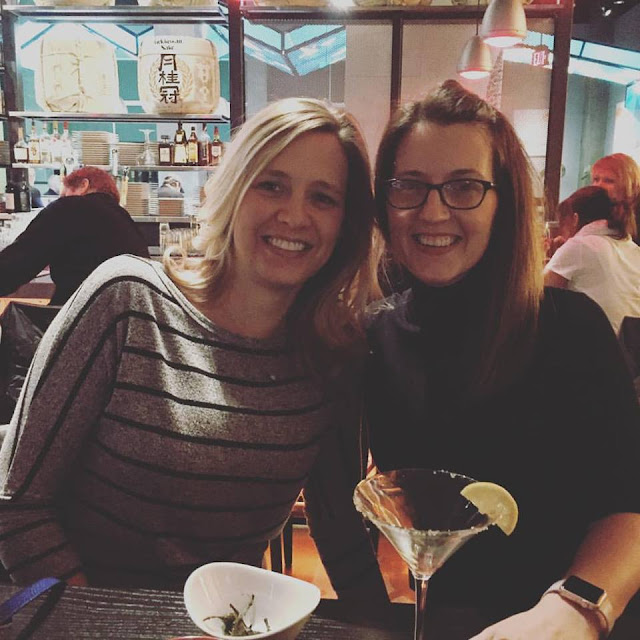 After dinner wrapped up we headed to Hamburger Mary's. It would be a new experience for all of us & we weren't 100% sure what to expect but we were all game. 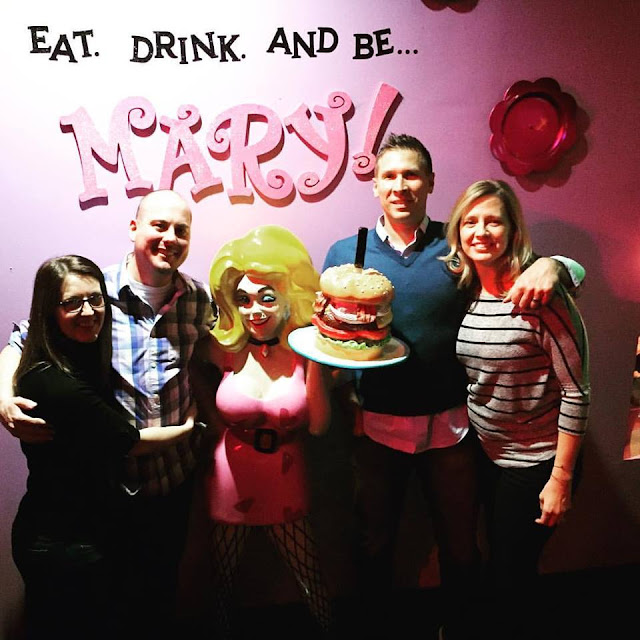 We had a blast. I can't really say good, clean fun but good fun certainly! The best part, I wasn't made to feel bad when we decided to call it a night after Dining with the Divas. We had another busy day the next day. Speaking of the next day, we kicked it off with two basketball games & a birthday party before Justin and I quickly changed and headed back out the door to the Boulevard. Tiffany and Jason had purchased a tour for 10 at their daughter's school auction which included an open bar after the tour! I don't like beer but I was excited to go. 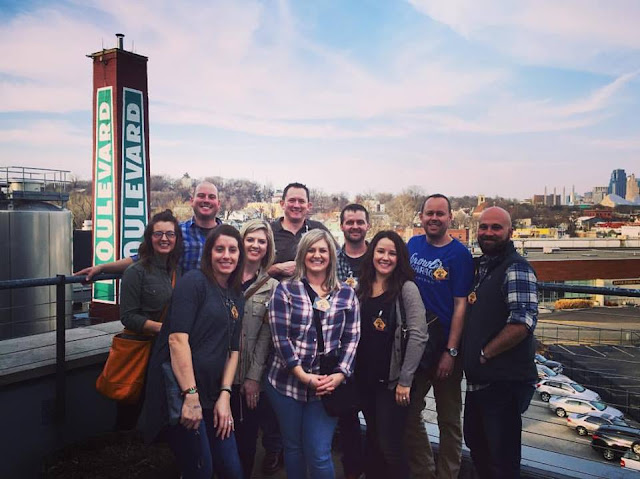 After the tour was over we got to try a few of their new test beers---I tried the grapefruit flavored beer and then their cider beer they will be rolling out in the next few months, it was delicious. So I had myself a full beer upstairs--I know, took me 14 years to have a beer. 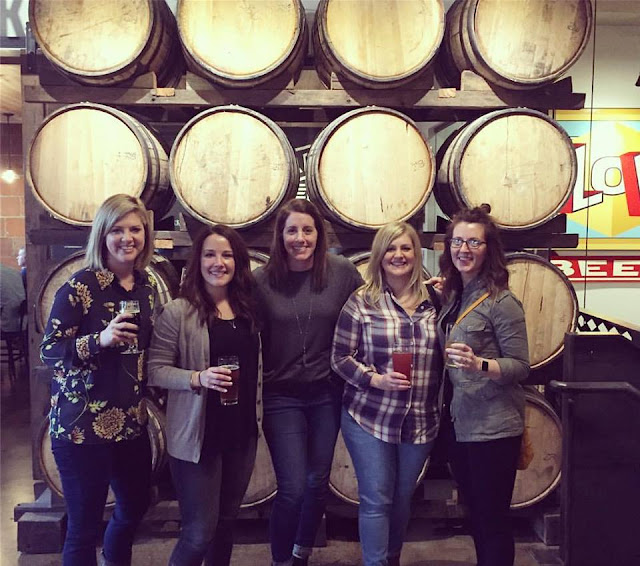 After the tour we dined at District Poor House in Waldo and then ended the night in OP. It was a great Saturday spent with some wonderful people, some we see often, others we don't see hardly enough. Thirty-five was off to a pretty darn good start.
Posted by Kayla South at 12:00 PM