Now, don't get me wrong, we have had sleepovers just not like this before. This was new to all of us. A friend of the boys' was coming over for the night & they both were super excited.

I had been traveling for the past few days and was texting this little man's mom back and forth about their basketball game that I had to miss and she mentioned something that Kaden had said to her son. She said Kaden talked about going to see Monster Trucks and her son was thinking he meant the movie, when I explained that Justin was taking them to the Sprint Center to see the real thing we started planning taking the boys to the movies that evening. We quickly figured out that the movie wasn't showing at the time we needed so I suggested that we have her son over for dinner, movie and a sleepover. He gave the thumbs up to the idea so as I FaceTimed the boys on their way to the Monster Truck event I told them the plan. Kaden immediately said "YYYESSSS!" and then I heard the cutest thing in the back ground from Logan...

Yes, buddy, you too.

The moment I walked in the door they started asking when their friend was coming over and the countdown started. Thankfully they can tell time now and they didn't have to keep asking me how much longer!

Their little buddy came over and we started things off with Papa Murphy's pizzas and then followed that up with the movie Trolls. The movie wasn't as important as what snacks they were having. The kids love popcorn but not just regular popcorn, popcorn with Skittles and it was just meant to be because their friend's favorite movie snack---popcorn with Skittles. 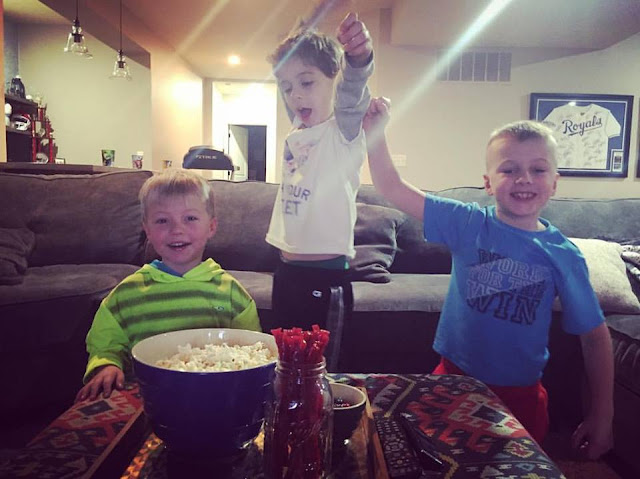 After the movie was over they played basketball, air hockey and shuffleboard in the basement. Ran to the toy room to play the Wii & then finished the night off with a quick episode of Inspector Gadget. Finally around 10 all was quiet in the house and I tucked myself into bed. 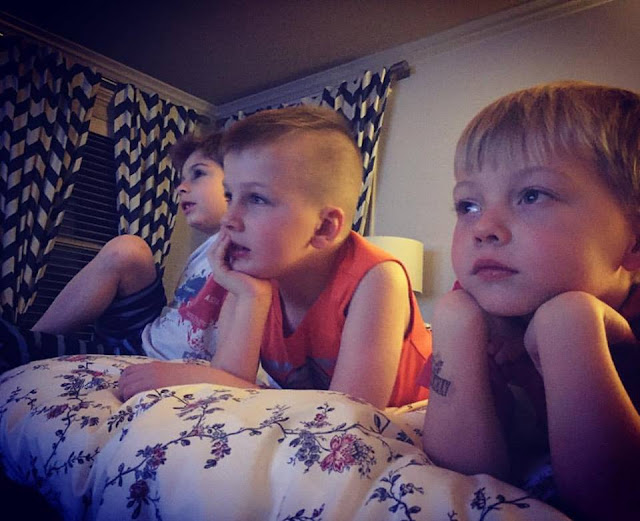 Before I knew it I heard some rumbling, 6:10 and both the big boys were up. Logan wanted to go back to sleep---he's my kind of kid. We started breakfast around 7 and then it was back to playing they all went. Legos, Lincoln Logs, 3DSs in caves they made--one thing after another. Best part, I didn't hear "Mom" all morning or night. 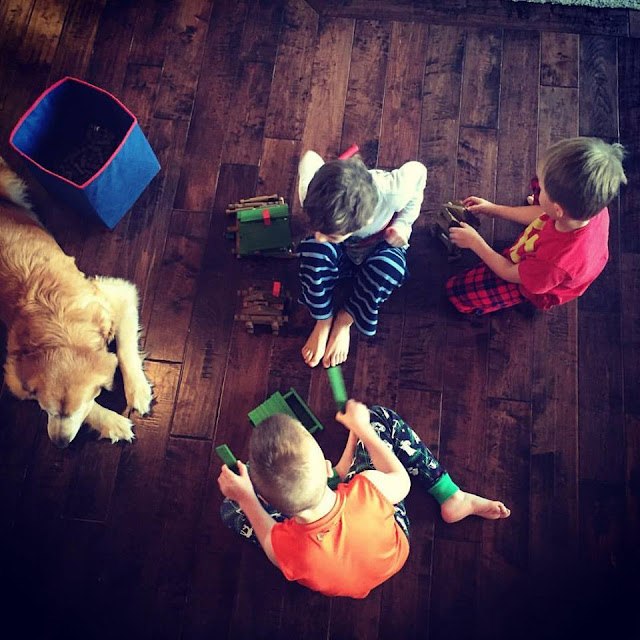 I announced they had about an hour left and then our friend's mom would be by to pick him up and they all instantly got sad but I reminded them all that we would be headed over to their house for the Super Bowl later that evening. They all perked up quickly and went back to playing so they didn't waste any of their time.
Posted by Kayla South at 11:30 PM