A Season To Remember

For as long as I can remember I have loved basketball. Some of my earliest memories are playing at a very young age and having my dad coach our grade's girls team. I have been waiting patiently for the boys to take an interest in basketball and finally, last year it happened. Justin and I decided that for our anniversary we would put in a basketball goal and get the kiddos a couple balls and from there it slowly took off. We would play Pig or Horse, we'd shoot for extra/early bedtime and I'd work with them on their shots. Nothing hardcore, I wanted them to want to play.

Baseball season came around and the basketballs went up for a little while. We'd pick them up from time to time but the focus was on baseball but that didn't mean I wasn't counting down the months until basketball sign ups. I asked both boys and they said sure. I signed them both up--Kaden in Olathe Parks and Recs, hoping to get with some kiddos his age and then Logan with GABL so he could play a little 3 on 3 before heading to full 5 on 5.

And then the email came, 12 first graders but no parent had signed up to coach or even to help coach. Part of me was jumping at the bits to replay back and say yes, the other part of me was completely unsure about what I would be getting into & frankly, a little nervous I didn't have what it would take. I talked it over with Justin and with Kaden and we decided that since December and January are typically slower months for me when it comes to travel that I'd raise my hand.

I wasn't the only one to raise their hand so they split the two teams in half and added a few additional late comers to our teams to give us 8---on a full day. I took on the first practice by myself but quickly realized that with 8 first graders I needed help and my saving grace, Mandy, raised her hand when I asked for it.

The season started off rough, real rough but our boys kept smiling and they were having a good time which is all we could ask for.

Week by week, practice by practice, game by game they improved. They worked on each of the skills we had covered the practice before and implemented them in the game. It wasn't always pretty but you could tell they were starting to get the hang of it. They were sharing the ball, they were looking ahead of them for the open man, they were bellying up BIG when their opponent picked up the ball.

And on the second to last game Aiden passed the ball to Jax and Jax didn't hesitate one bit and took the shot---it went in. Seeing Jax work so hard all season long and for it to have paid off like that was everything. Every parent, sibling, coach was on their feet cheering for him in that moment---highlight of my season.

We ended the season with another tough game but the boys played so hard and you could tell just how far they all had come. Coaching was so much harder than I had expected, it was emotional, it was nerve wracking, it brought out insecurities in me that I was unaware of--was I doing enough for the kids, were the parents happy with the season. So many ups and downs but in the end, these smiling faces were enough reason to do it over and over again. 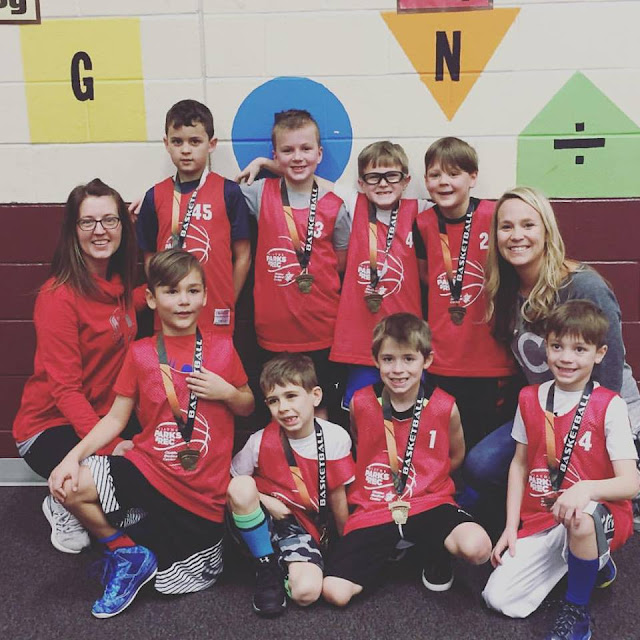 We celebrated the season with a little medal ceremony & continued the fun at Johnny's for pizza and games. It gave the boys time to hang out outside of basketball & it allowed the parents a little time to relax and talk too. And as we headed out for our team celebration, Mandy and I were handed beautiful flowers from the boys and I snapped a picture so I could not only take them on my trip with me that week but also so I could remember just how special this first season was.

Awesome kids. Awesome parents. And the BEST partner in crime a gal could ask for when it came to a coaching buddy. Thanks Mandy, couldn't have done it without you!  And your hubby.
Posted by Kayla South at 11:03 AM