A few months back I ordered a few new magnets from Sticky9, we were in need of updated magnets for the fridge. I believe I took advantage of the buy 3 get 2 free deal which would have given me 45 magnets, too many for sure but I could easily give away a few to my mom and MIL.

When the arrived a few short days later I was beyond confused. I had 4 separate envelopes from Sticky9. My first thought, maybe one set of the magnets was delayed...nope, they quadrupled my order. I rushed to the computer to check my bank account to ensure I wasn't charged and additional 3 times for my one order. I wasn't. So here we were with 200+ extra magnets... 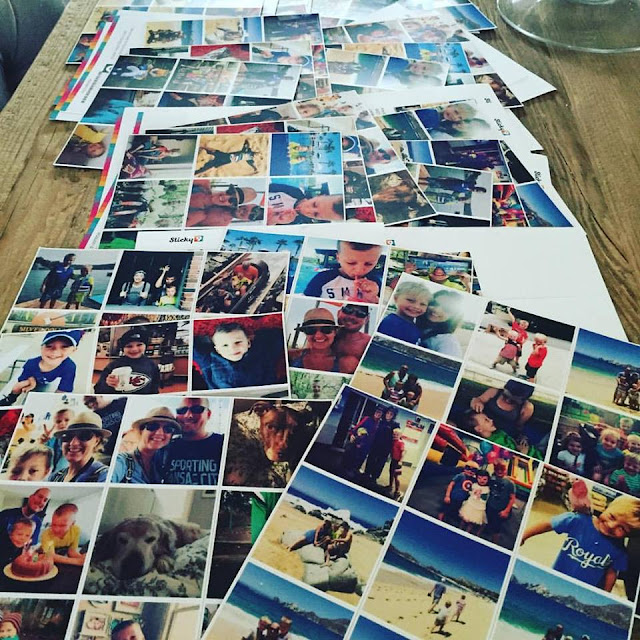 I gave a number of them away. My sister got a pack, my SILs both got a group of pics, friends...if they were in a pic, they got a magnet. But I was still left with an obscene amount of pictures so I decided to create another Sitcky9 collage like I had a few years back.

All I needed was a new frame from Ikea. Simple right?! Well, as I pulled the last one I did off the wall I noticed that it wasn't black, it was a dark grey and Ikea for some reason didn't have dark grey so I decided instead of having a mix-match of frames that I pick up two frames and would redo the first one and change the frame from grey to black.

I sorted through magnets, pulled out any duplicates and started arranging them on the glass part of the frame. Note--I used these Ribba frames from Ikea. They measured 19 3/4 x 19 3/4 and were only $14.99. I have Ribba frames of all sizes and colors all over our house, Logan's gallery wall in his room, our striped-trip-down-world-series-lane-wall in the basement... 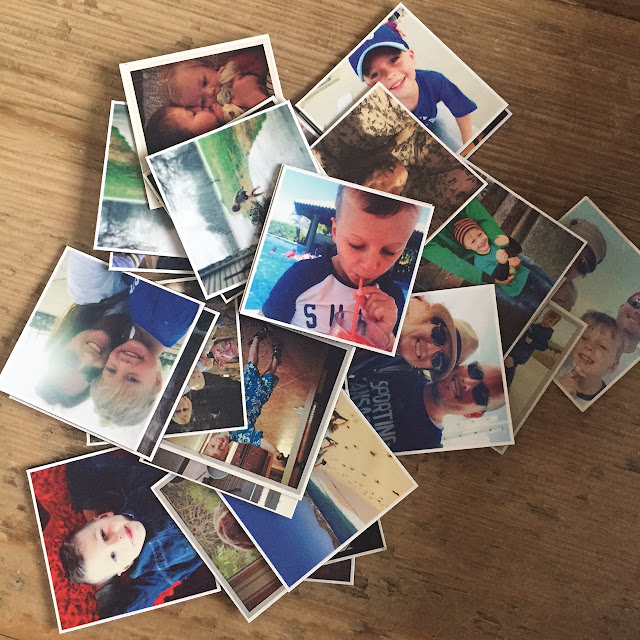 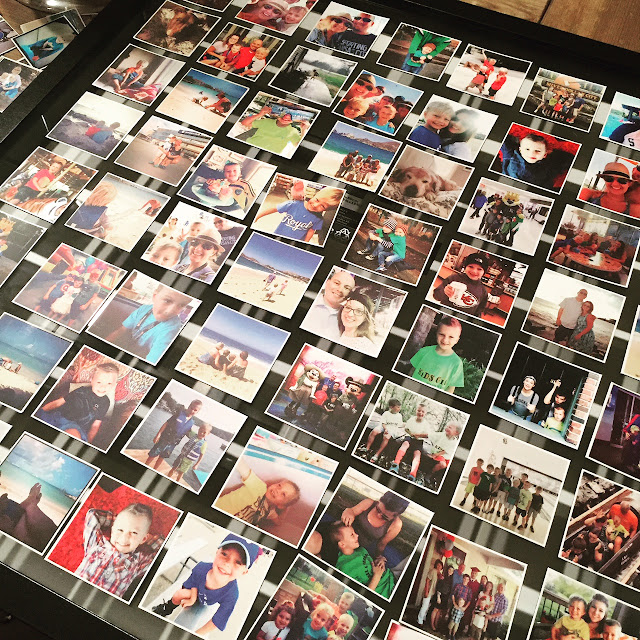 I purchased a piece of poster board from Hobby Lobby and cut it down to size to fit the frame, it was only around $2.50 with my 40% off coupon. Other purchases at Hobby Lobby were Scott removable tape squares but I found these on Amazon. I would need at least 64 of them since I would be using 64 magnets. & that was it for my supply list.

While Justin watched Sunday Night Football--playoffs were on--I sat on the floor and taped each magnet to the poster board. I placed the bottom row first and then the far row on the right. After getting the spacing correct on those two rows, I worked from the bottom-right hand corner up in a diagonal fashion and finished at the top-left corner. By working in this direction I was able to keep the spacing the same, well as close as I possible could without marking it all out. 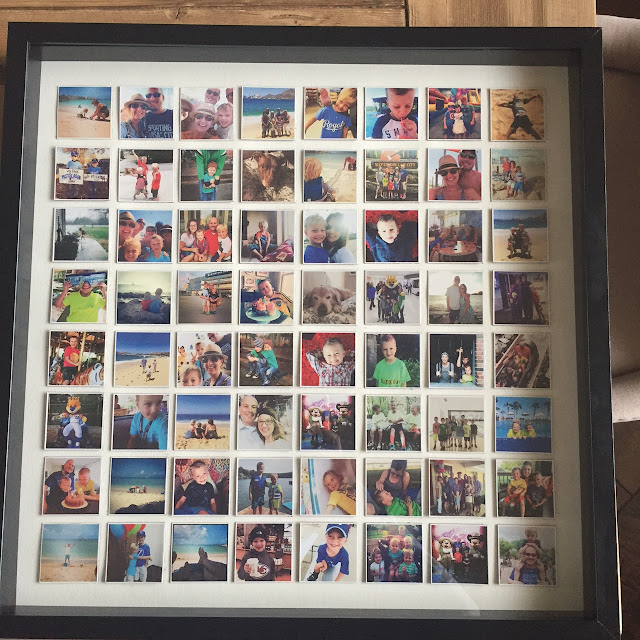 I finished the project off with a coat of Modge Podge. The first time around I did not use this but I noticed that some of the magnets were starting to pull away so one quick coat with Modge Podge gave it a little more stability. I tested this out with 3 extra magnets I had first before applying it to the first project I did and after seeing the result I then covered both Sticky9 collages with it. Gives it a little more of a finished look too. 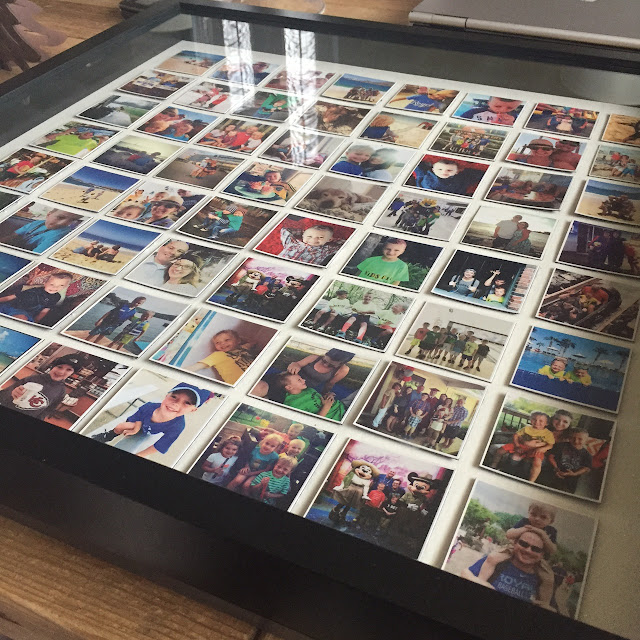 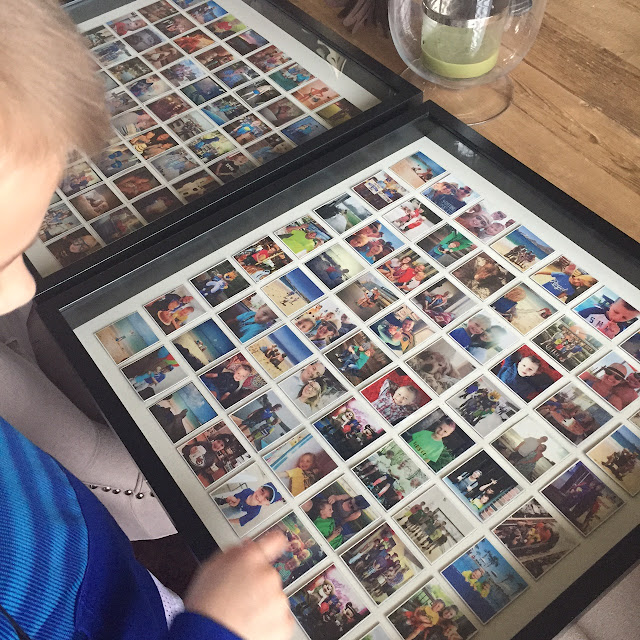 Literally took very little time to do and was very inexpensive to do---especially since I had so many Sticky9 magnets that were sent to me by mistake. Although, if you buy when the deals are good, getting 64 magnets isn't too bad and it would make for a super cute gift or for us, these will end up in the boys' toy room as wall art.

Just another way I use some of the pics I take & store on Instagram.
Posted by Kayla South at 10:16 PM