It would be historic moment in America's history & I wanted to bring the boys along for the ride. They're only 5 & 7 so of course we didn't go into a lot about the candidates and honestly, we sheltered them from as much of the election coverage as we could---they didn't need to see how nasty it was getting between the two candidates, their innocence needs to stay intact for a little while longer. Nevertheless, they went with me that morning to the polls & helped me cast my vote. 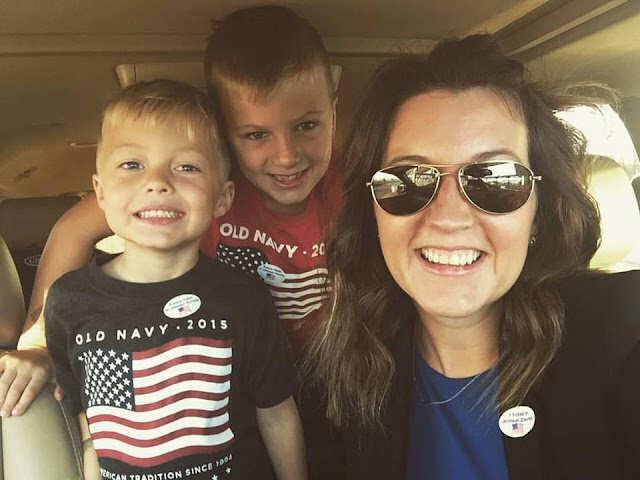 It's no surprise who I voted for, I wasn't shy about it. I also feel that I wasn't---shove it down your throat and you better agree with me--about it either. Maybe to my mom, we had lots of great talks but in the end, I can have those with her, she still loves me and I love her probably more because she accepts my differing views and doesn't try to change them.

I voted for Hillary. #imwithher

I want our boys growing up in a country where we respect one another. That we accept one another no matter our race, religion, sexual orientation or gender.  A country where we pick one another up and lend a helping hand when someone is down. A country that is kind. That doesn't mean that we always have to agree on the same issue but it does mean that we need to be open-minded. To listen to each other because when we are open-minded and listen to one another, we knock down walls. We start moving towards a greater America.

I wanted her to win because she was the change that I felt our country needed.

I stayed up and watched as all the polls closed and as states declared their winner. Mr. Trumps numbers continued to grow but Florida and a few other battleground states were still on the table, she only needed one, maybe two depending on how you sliced it. She didn't get it and before I finally went to bed, like really turned off the tv and went to bed, Trump gave his acceptance speech. It wasn't the Trump that we have seen every day (outside of the last two weeks) of his campaign. He was soft spoken, a little more articulate and tried unifying the country but it will take more than just one soft spoken speech for me to believe that he will truly try and bring the country together after the campaign he led.

Hillary didn't speak last night. She conceeded over the phone to the President-elect Trump but we as a country didn't hear from her until this morning.

She came out to address her supporters in nothing other than a pantsuit--purple at that. Afterall, together, red and blue make purple. She gave a speech like no other. It was presidential, poised, and full of so much class. And as much disbelief as she might have still been in, she called for our country to join behind Mr. Trump. That he won the election and deserves to be given a fair chance at running our great nation.

So today, the sun came up. God is still good. & as an American, it is my duty to support our President-elect & work towards bringing this country together. To spread love & celebrate differences.

This election will go down in the history books. Mr. Trump accomplished something short of a miracle that no one---media, polls, either party, vast majority of Americans---saw coming. It was the upset of all upsets but I'm still happy I was with her.

& I'll end with just a few of my favorite HRC quotes from her remarkable concession speech:

Our campaign was never about one person or even one election. It was about the country we love—and about building an America that’s hopeful, inclusive, and big-hearted. -HRC

...please never stop believing that fighting for what’s right is worth it. It’s always worth it. -HRC

And to all the little girls watching right now, never doubt that you are valuable and powerful and deserving of every chance and opportunity in the world. -HRC
Posted by Kayla South at 3:33 PM