I haven't been back to Pitt in years & honestly, I think it's only been once since I have graduated. Justin and I talk about Pitt, the kids have asked a few questions here and there about where we met and we tell them how one day we will take them there. Except we haven't, and they're now 7 and 5.

It's not that we aren't proud of where we went to school. We are. It's not that it would take us forever to get there. It wouldn't. Life has just gotten busy and if you don't make something a priority, it isn't going to happen so we decided to do just that, we made it a priority. If the weather cooperated we figured we could go down for homecoming, there would be a parade, good food and lots of activities for the boys to do.

The parade started at 9, we had plans to leave around 7 which turned into 7:30 and then the next thing we knew it was showing us arriving WAY later than we expected and we were pretty certain we were going to miss the parade. So we prepped the boys who were pretty bummed, they wanted candy. 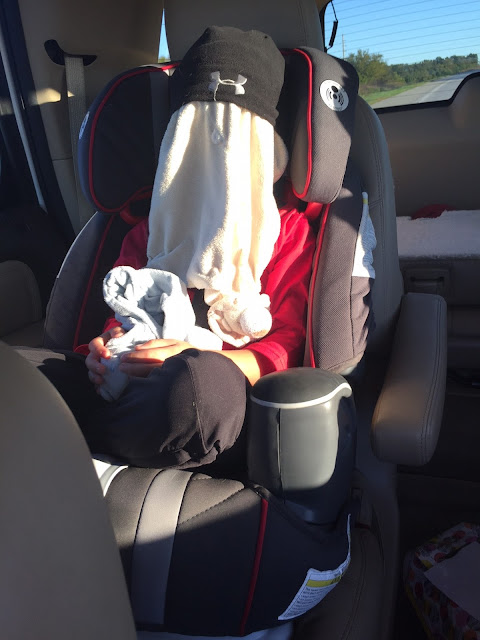 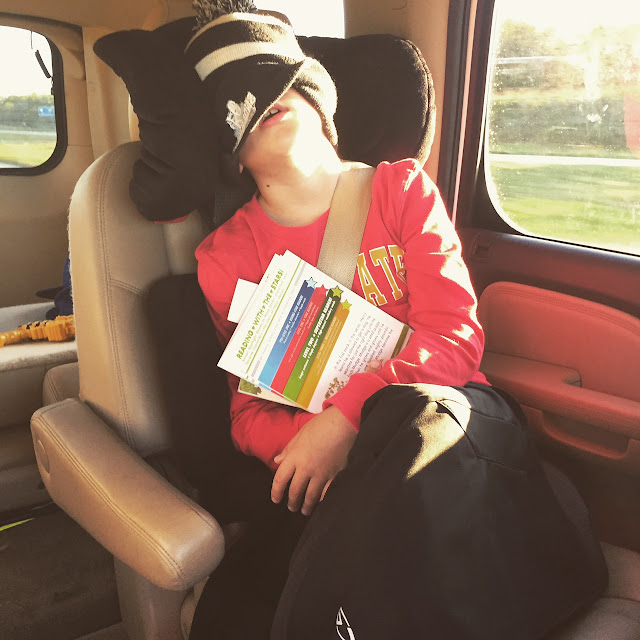 As we pulled into Pittsburg all the feels came flooding back, it hadn't changed a bit--or at least what we were driving by hadn't. We took the bypass---oh the bypass---to 4th and Justin pulled up to Broadway and we noticed the parade was still going so the boys and I jumped out and ran up to hopefully catch the tail end, except we caught so much more! And the boys were in candy heaven. 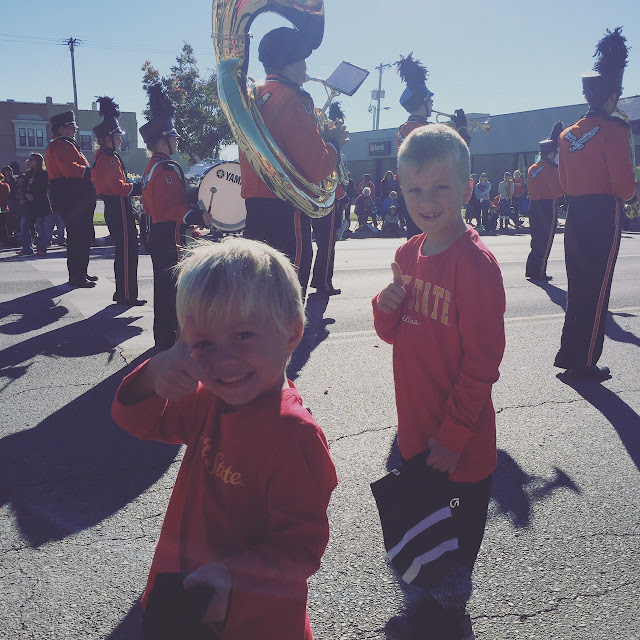 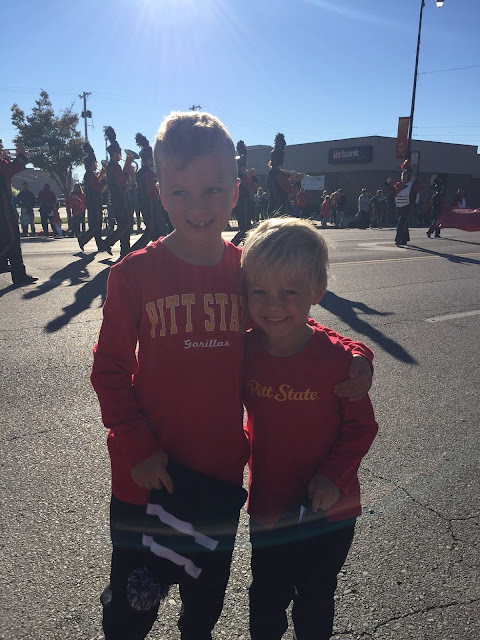 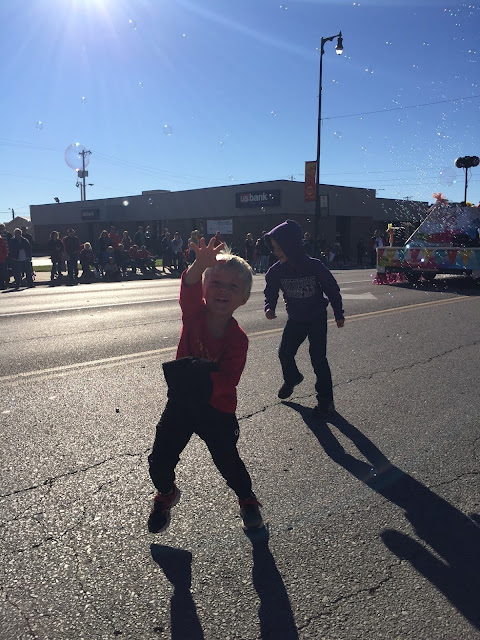 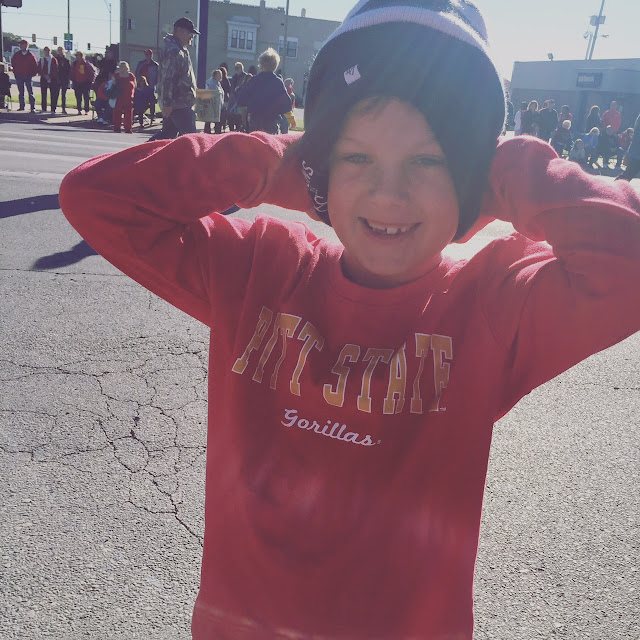 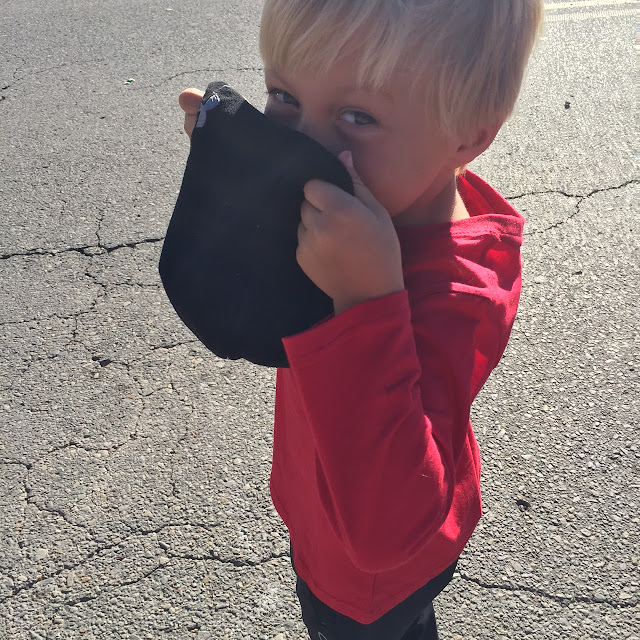 And then as the parade was wrapping up the boys had another surprise.... 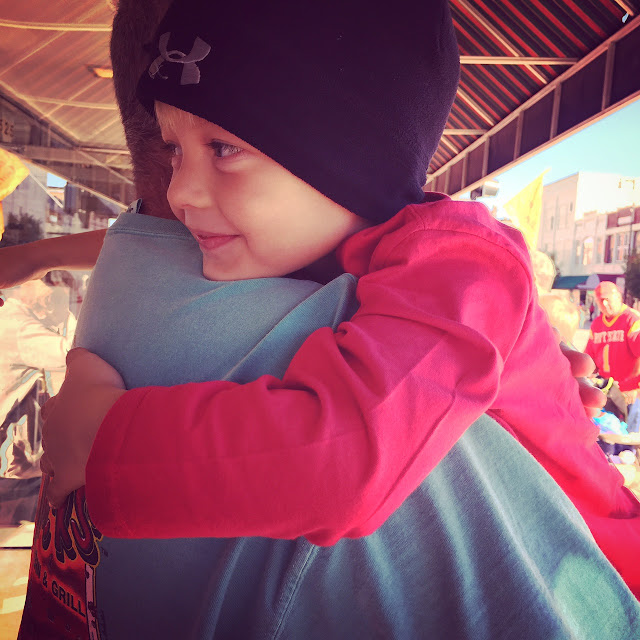 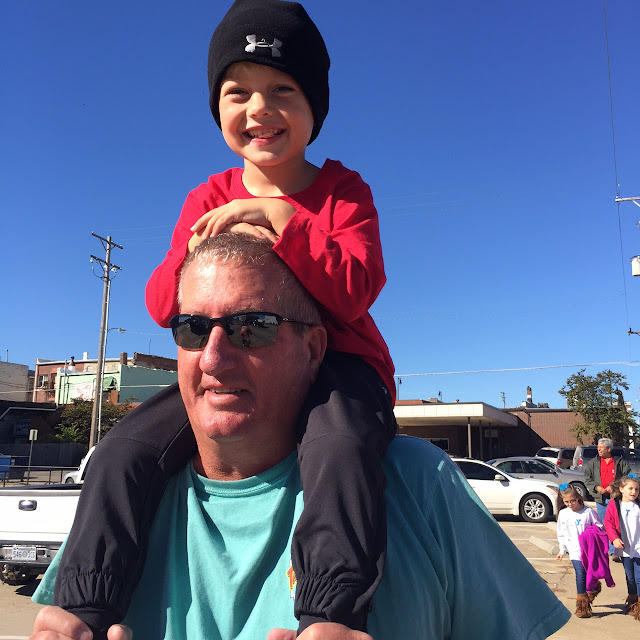 Papa Tom and Grandma Sara came made the short drive over to say hello and venture onto Gorilla Fest with us. Outside of moving me in and out of the dorms and my graduation, I can't count too many other times my parents came to Pittsburg. I was pretty much always working on big days like family day or homecoming and when I had time off, I headed home for gas, laundry and a home cooked meal!

We drove by the old dorms, Justin's faternity house, parked and then walked to the stadium. As soon as we got to Gorilla Village the boys got their faces painted and hit the bounce house--looking back we probably should have done the bounce houses first. 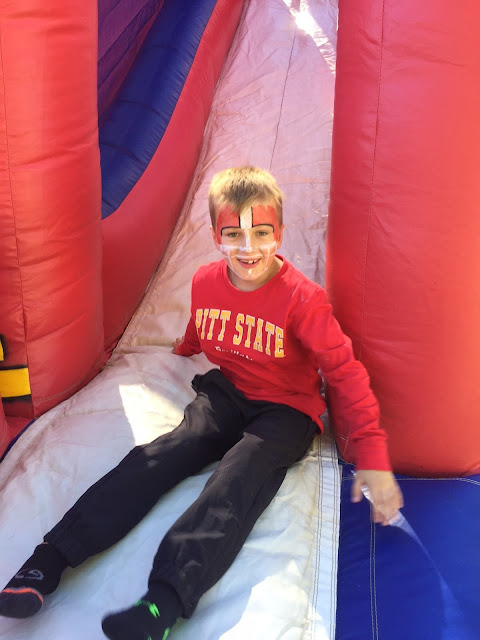 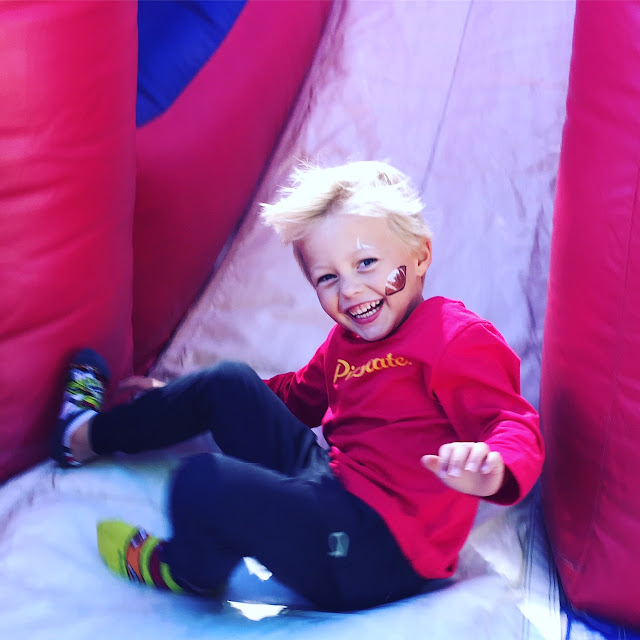 We grabbed a quick bite to eat and then got in line for some balloon animals--well a bow and arrow and a light saber. And somehow, neither busted. We piddled around for a few minutes and then Papa Tom and Grandma Sara said goodbye but not before grabbing a picture for me. 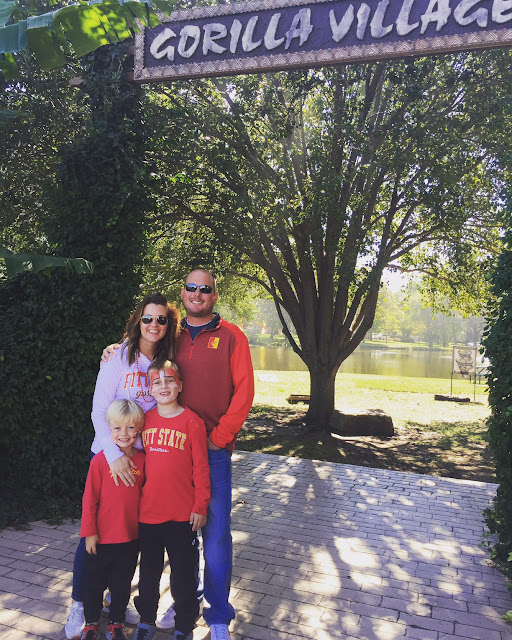 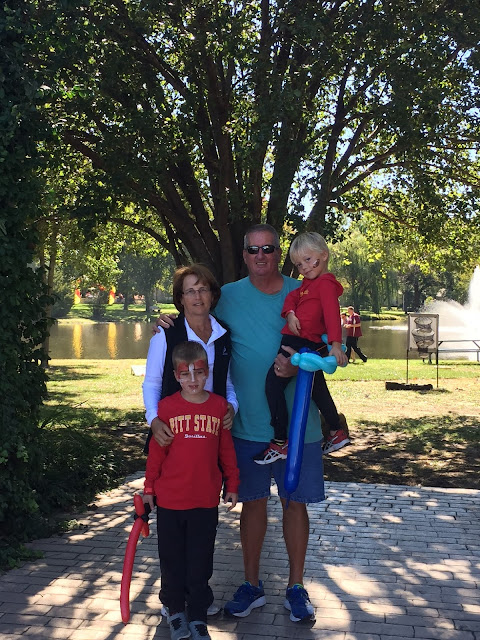 I can't believe how tall Kaden is getting, he'll be at Pitt before we blink--STOP GROWING. 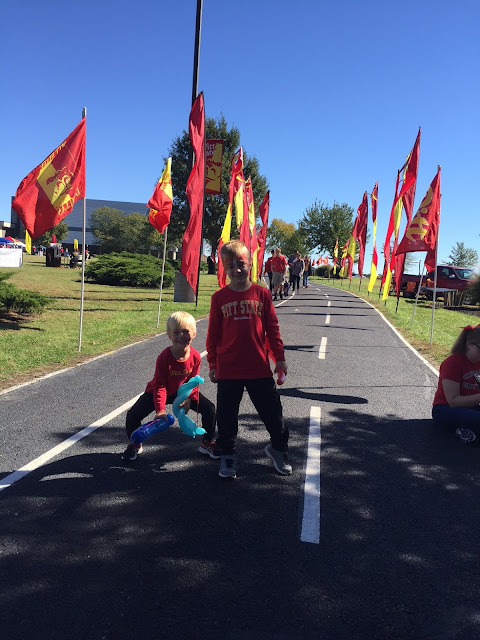 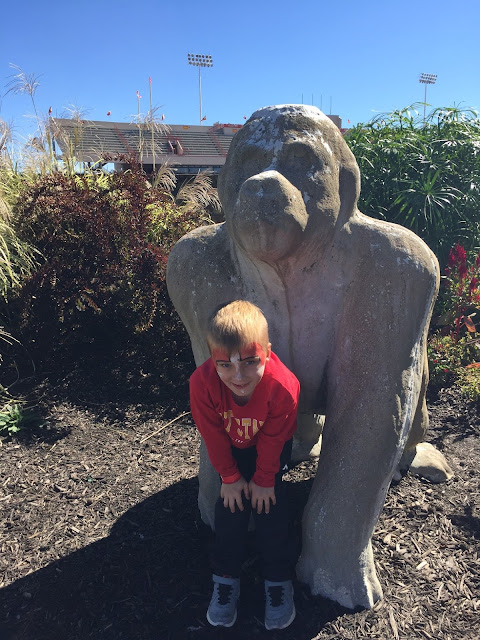 We had never planned on going to the game, just figured we could take in the festivities and then as the crowd picked up we could hit up The Mall Deli. We were close to losing the boys, both were on the verge of tears because they were so tired but once they saw The Mall Deli they were good to go. They love sandwiches...

& the first thing we did was introduce them to "the dressing" & crackers. They were a little hesitant but Kaden went first and declared it "fantastic & interesting" & Logan soon followed with a thumbs up approval. Justin picked up a bottle to bring home as he paid and both boys again said, "that was really good, Dad. Thanks!" 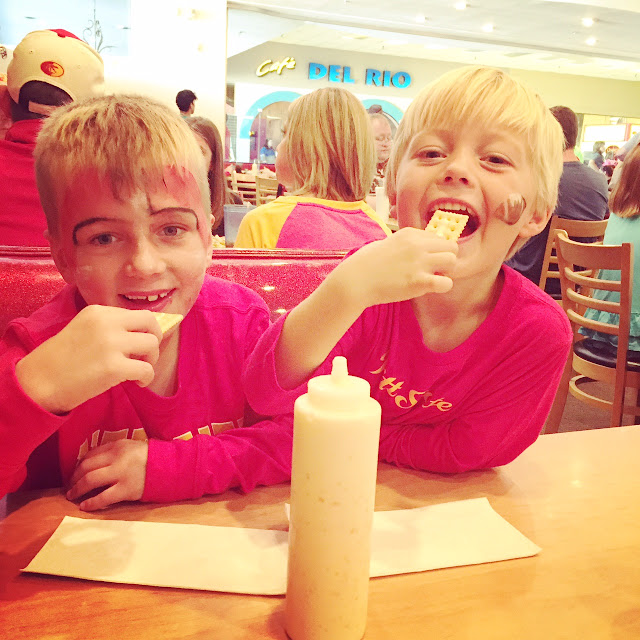 And it was. Mall Deli was everything that I remembered. I had the Deli Dog & it was like no time had passed. On the way out I told the lady that seated us that it had been 10 years since we had been back but that nothing had changed. So good.

I showed the boys were I worked for 3 years while going to Pitt -- Bath and Body Works -- made one final stop at Hibbet Sports as both boys were requesting new shoes---which they needed--and then we were on our way back to KC.

On the way out of town we swung by 3105 Scotty Dr.--my home in Pittsburg for 2 years with Abby and Korie and again, everything still as it was when we left. That's what I love about small towns, there are never big changes, just small little updates that add to the character and the love of the town. It didn't matter if it was 1, 3, 5 or 10 years, Pittsburg still felt the same and it probably always will, which is the way it should.
Posted by Kayla South at 3:52 PM