It was that time of the year again--party planning for the soon-to-be 7 year old and it was no easy task this year. So many decisions to be made---do we do a school friends party or a family/friends party. And if we go with his school friends, do we invite those from last year's kindergarten class or this year's first grade class? Will our friends and family be sad if they aren't invited? Or will Kaden be sad his school friends are there? What theme do we go with? Cake, Cookies or Cupcakes? What do you get a 7 year old?

SO MANY QUESTIONS & I was getting stressed out about trying to make it all happen so I sat the almost-to-be birthday boy down and asked what he wanted. He wasn't stressed at all and had it all figured out. He wanted a bowling party (Grammy and Daddy were excited about this) & he wanted to invite his school buddies. Oh and he wanted me to make a cake.

Now that we had a plan, it was time to start planning. I reached out to our favorite bowling alley & secured space for 10 kiddos for 2 hours. We would spend a little time bowling, some time in the party room and then they kids would get to finish off the party playing games in their arcade. For the first time, I didn't make an invitation, I just used Punch Bowl and called it good. We decided that it would be best to have the party at 11:30 in case the boys had afternoon baseball games which partly worked out as Logan ended up missing his game so he could come to the party but he wasn't upset about that.
From Amazon I ordered---plastic bowling pins to fill with candy, a miniature bowling pin game & his birthday shirt.

From Target I picked up some plates, cups, & napkins.

From Price Chopper Justin picked up the balloons.

And that was it besides the cake and cookies!

For the cookies I decided to reach back out to Icings by Ang and once again she came through for us---I mean, she never disappoints. And if you can believe it, the cookies taste better than the look--seriously. 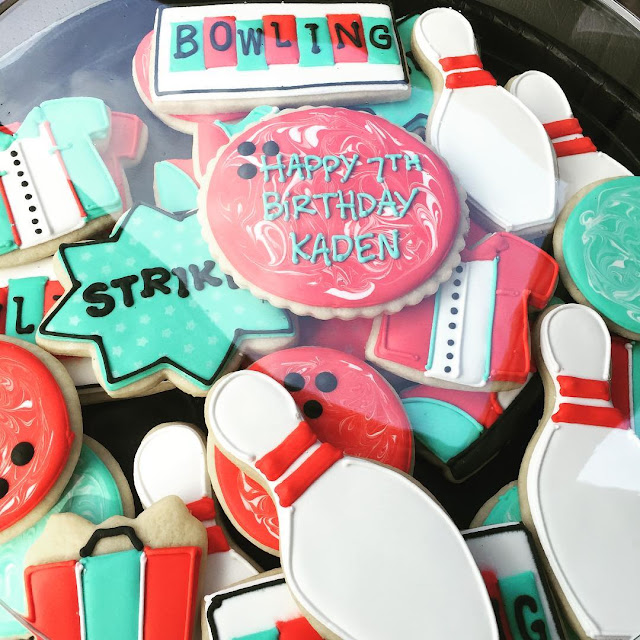 The cake I started a earlier in the week as I knew I would be tight on time so I made the cake and then froze it. As soon as I walked in the door on Friday, it was go time. I had icing everywhere, my hand hurt like hell but hearing Kaden go on and on about how awesome the cake was made it all worth it.

Now how was I going to make this cake, seeing how I don't really have much experience with cakes. I did a trial run a few weeks back that when pretty good so this time around I just made the cake bigger, used two cake mixes and a larger cake pan. Then I wrapped it and put in the freezer. Once I pulled it out, I unwrapped it and then placed my drawing on top. 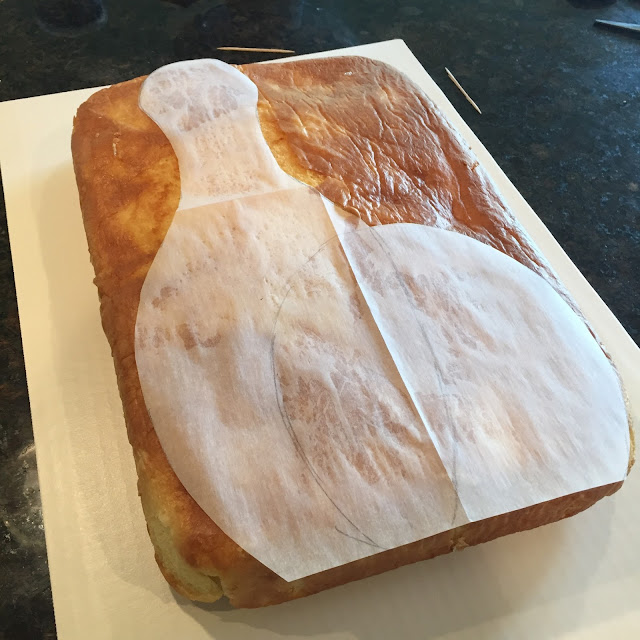 I used a big knife and just cut around the shape and put the scraps to the side---they'll be used for a trifle of sorts later. I was having a little trouble finding an icing that I liked and could easily work with and then my cousin recommended a Crusting Buttercream frosting, she was totally on point! I crumbed the cake and then started starring the shit out of that cake. 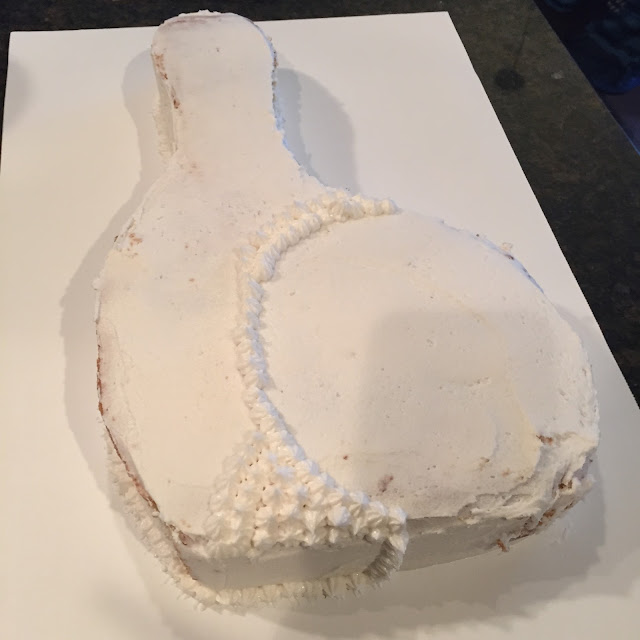 In the end I wish I would have put the "7th" at the top of the pin & then wrote Kaden alongside the bowling ball but you live and you learn. 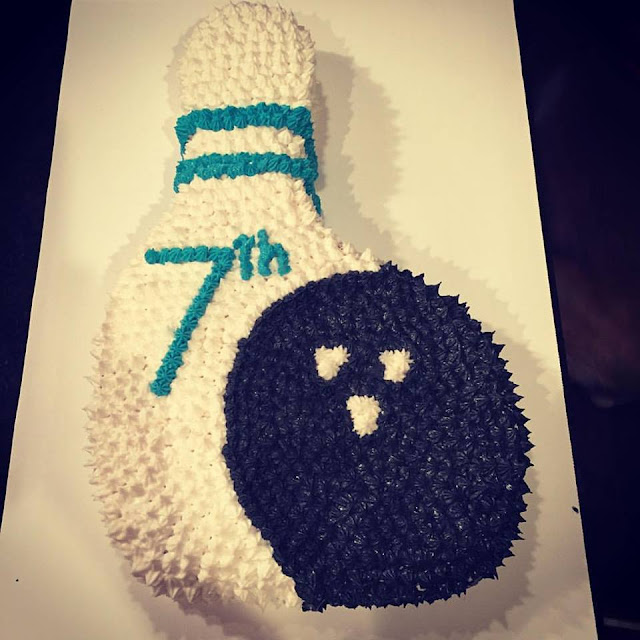 So now the party. It was a huge hit. Kaden had such a great time. We told each of the parents that they could drop the kids off for the party and come back at the end to pick them up & that's what they did. We had a great group of kids & they all got along so well with each other. They gave one another high fives as they arrived or a little "bro" hug--so cute. As everyone arrived our hostess got them all shoes and got them on their way with bowling. 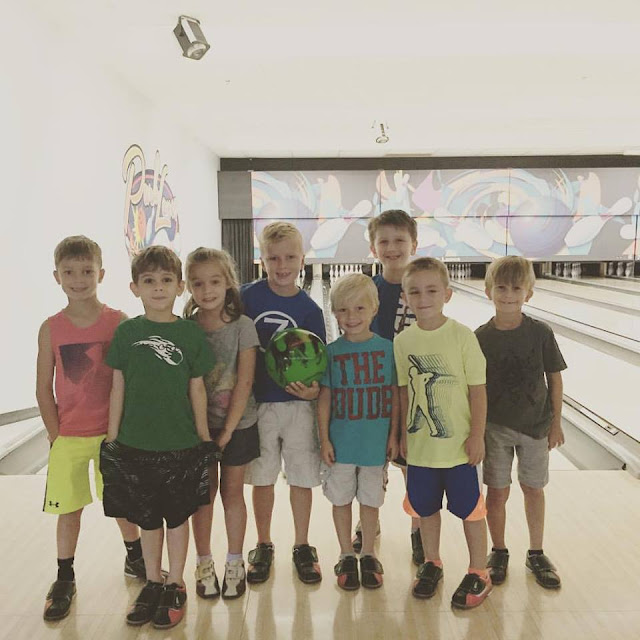 & that bowling ball you see, that just happens to be a gift from his Grammy. Janet heard that we were doing a bowling party and asked if she could get him his very own bowling ball and we of course said yes so on the Thursday before the party she dropped by, gave him his gift and then took him to get it drilled so that it fit his fingers perfectly. 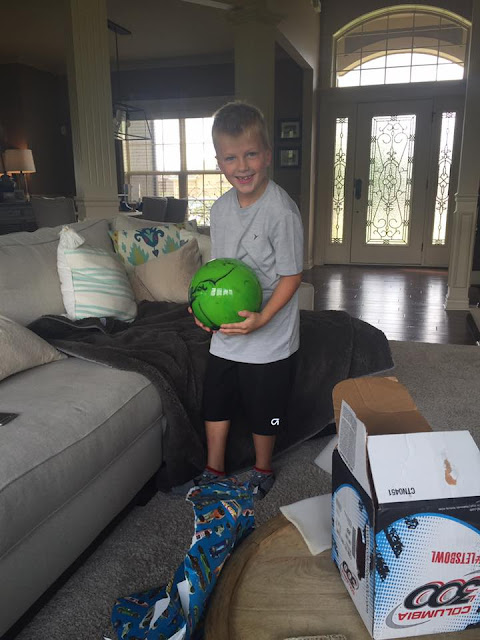 He even got to test it out at the pro shop. Talk about having the South form down! 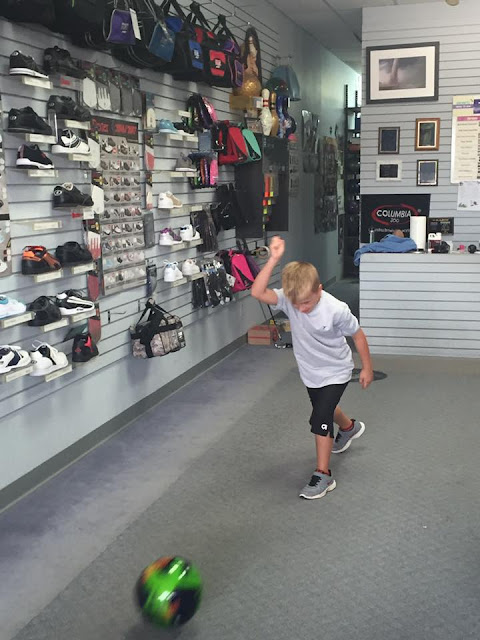 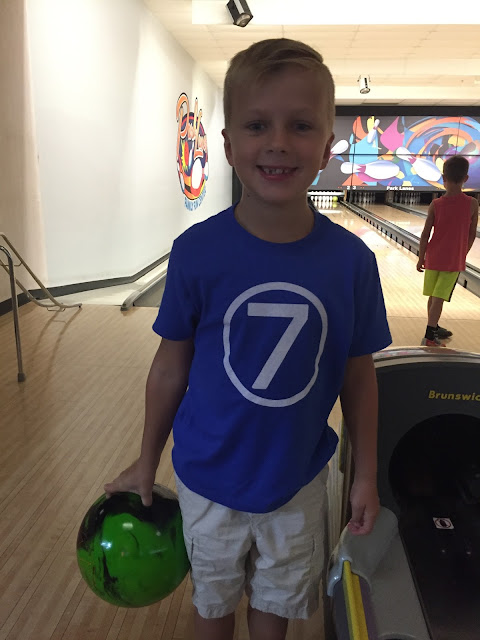 Once the kids were starting to show signs of no longer wanting to bowl---about 45 minutes in, we headed to the birthday room. And I could not say enough great things about our hostess at Park Lanes, she was fantastic. I didn't realize that Kaden would get a bowling pin--signed by all his buddies, nor did I realize that they would all be getting a gift baggie--all bonuses in our book. 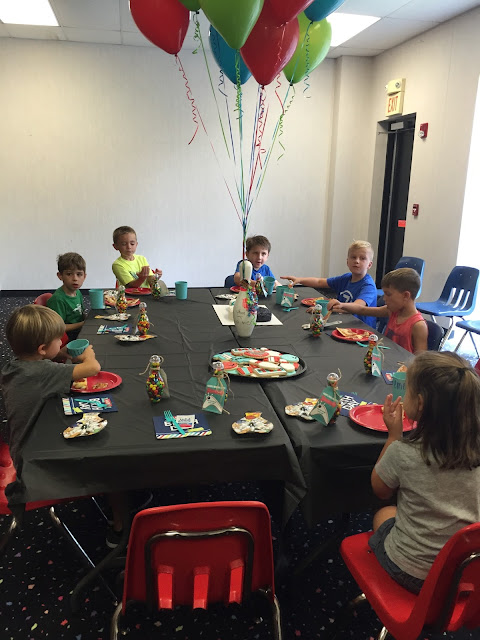 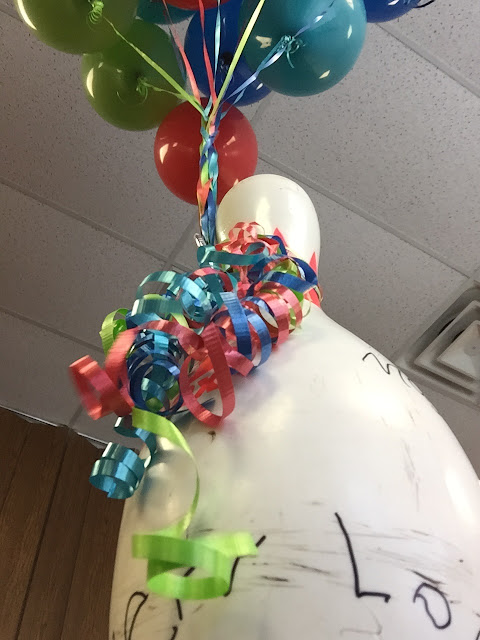 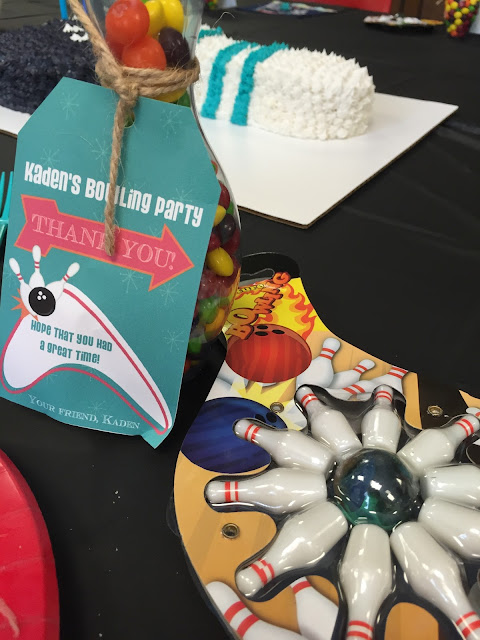 Although I think I should have stuck with lemonade and not fruit punch because Kaden had a red mustache for the rest of the day. 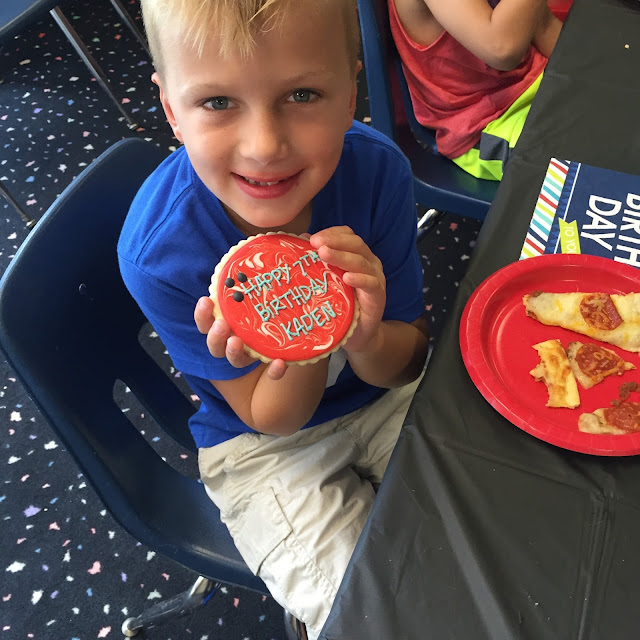 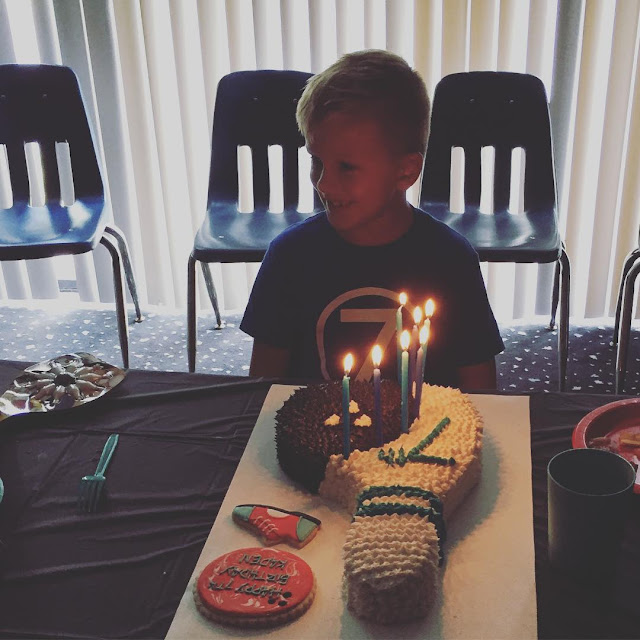 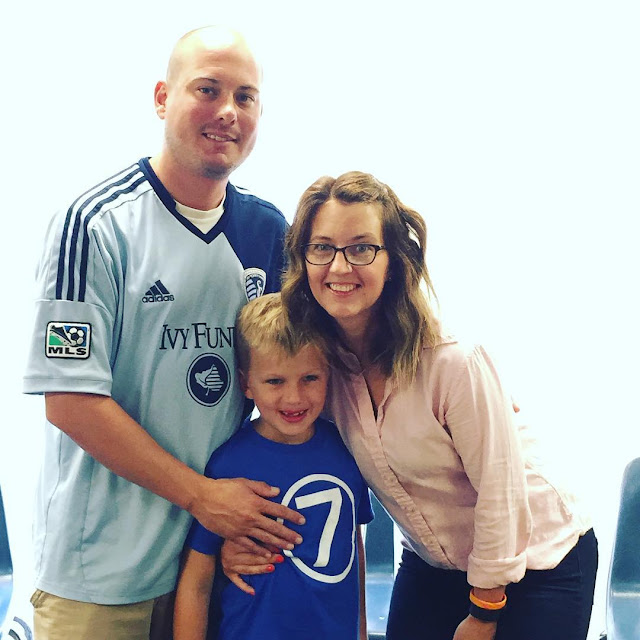 Before sending the kiddos off to play in the arcade I had Kaden take a picture with each of the boys. Figured that I could send a Sticky9 magnet inside the thank you cards he is going to write. Most of the boys would walk up and stand next to Kaden and he would wrap his arm around them and I would snap the picture. That is until Logan came up, he ran right up to his brother and gave him the biggest hug possible. It was the cutest thing. 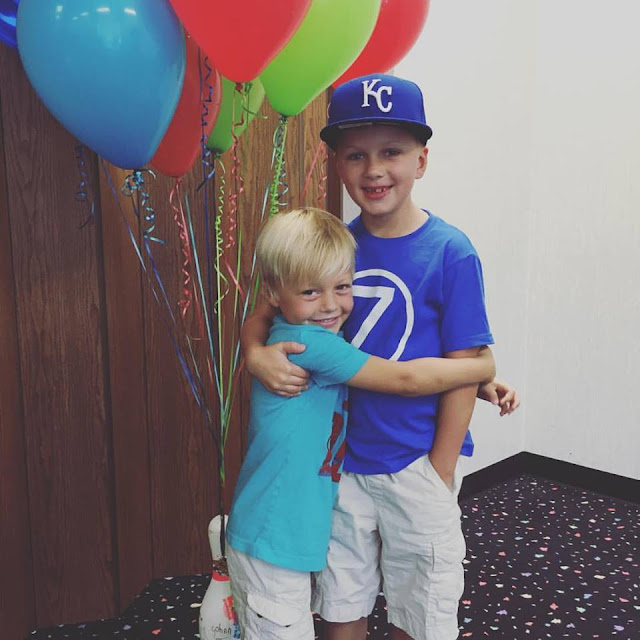 Finally, it was arcade time. They were bursting at the seams to play. 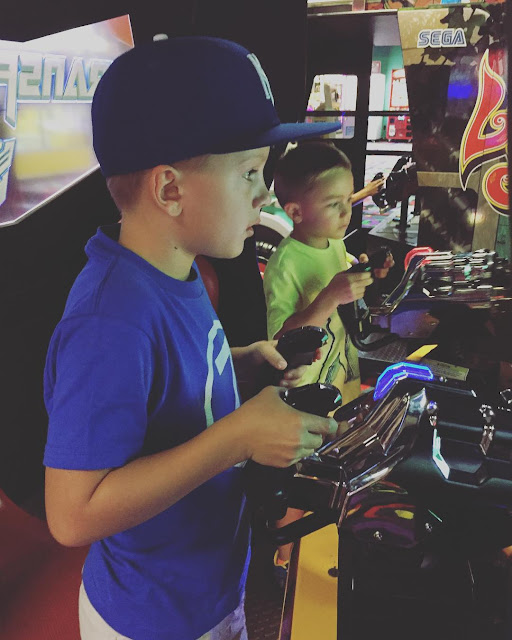 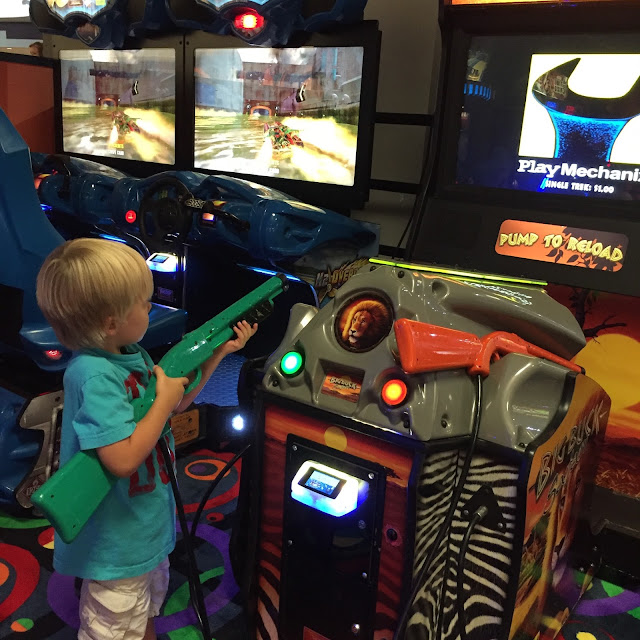 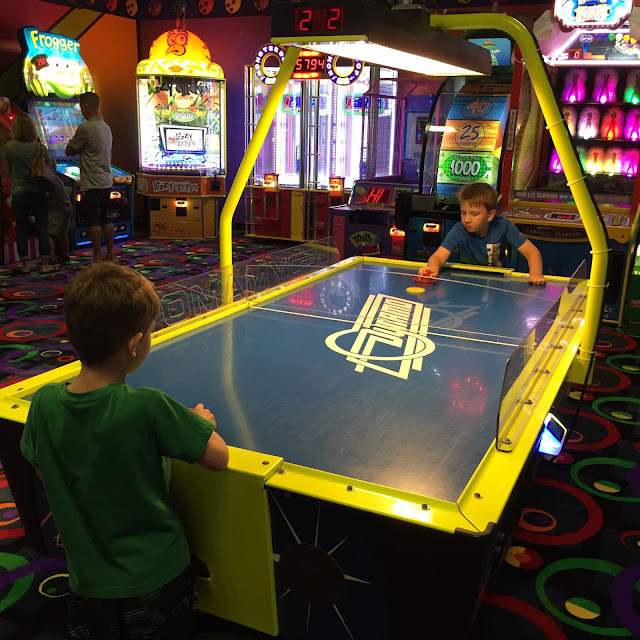 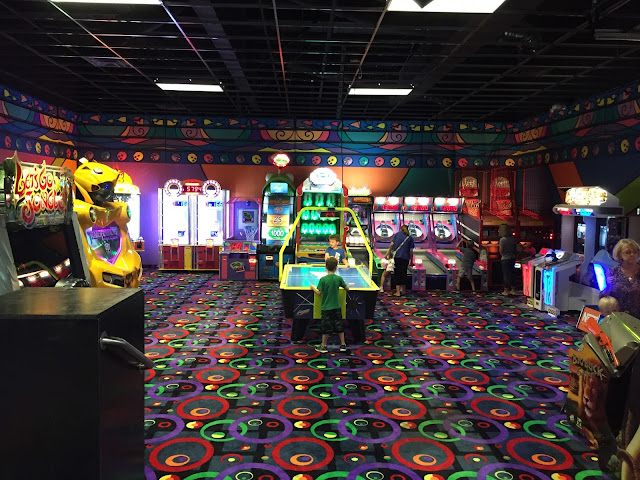 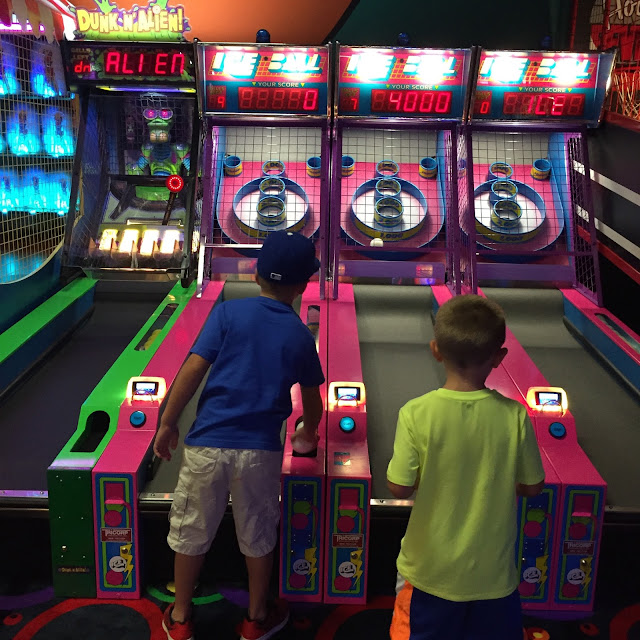 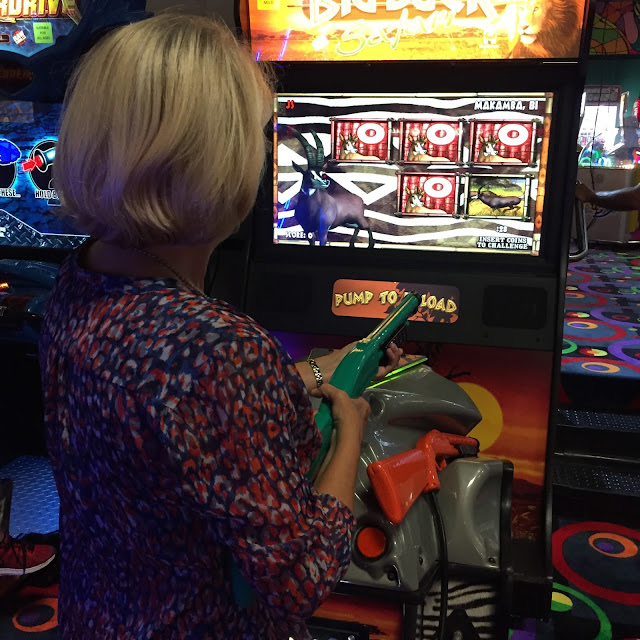 The kids all left doped up on sugar, with a handful of crap & hopefully with some great memories. I know this kid did---he couldn't stop talking about how much fun he had. 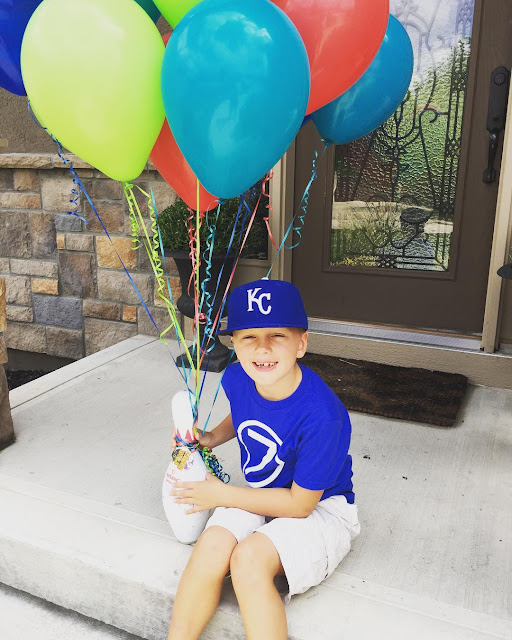