So there's this new thing in KC called iFly, it's been a round for awhile and I eye it every time we drive by but sadly, I'm the only one who wants to give it a try. Justin doesn't like amusement park rides, the boys, I thought, were too little so it just didn't make sense to do it alone. I wanted to experience it with someone.

And then Leah arrived. & she was totally game for it. We decided to wait until her final week with us and go out with a bang. She was a little nervous. I really wasn't as I have jumped out of plane before and done the real thing but was certainly excited.

Leah and I arrived an hour before our flight time. 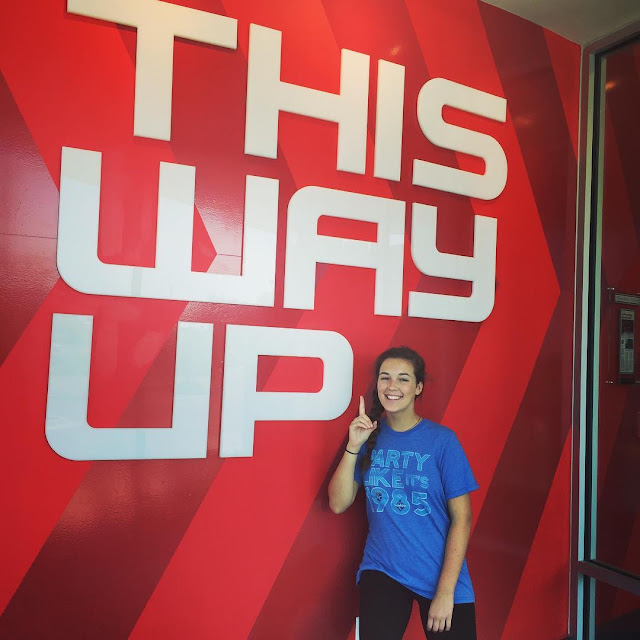 The boys came later. Right before we were about to take off. 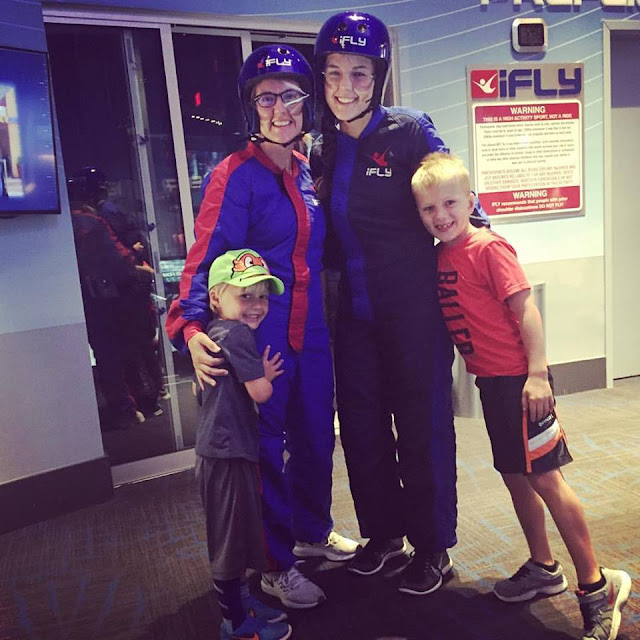 We were in a group of about 8 people. We all got suited up, entered the chamber waiting area and took a seat waiting for our turn. Leah and I were the last two to go. We would get two turns in the wind tunnel. Your goal is to have as little contact with the instructor as possible but for first timers, that would be hard. When entering the chamber you try and make a big X, or a jumping jack of sorts--chin up, legs straight, and arms in front of you.

It wasn't that it was hard but you could hear absolutely nothing & you were trying to focus on everything they told you so you could get the most out of your flight time so I felt kind of tense the entire time but wasn't too upset with my first attempt. Up next, Leah.

After the first round, everyone got to go a second time and for an extra $0.06 we got to fly to the top with the instructor for the last 30 seconds of our flight. It was pretty unreal and actually made me want to do it a few more times.

& then Leah went again. She was catching on really well they said. And our instructor, Pepe, was very impressed with how little he really had to help her.


We had such a great time and it was so fun watching the boys watch us fly. They had smiles on their faces the entire time and both have asked if they can go and since you only have to be three, I think we might let them try it out for Kaden's birthday. I'll place bets now, Logan will fly, Kaden will back out it---which is totally okay, he can sit with his dad. Thanks for flying with me Leah!!
Posted by Kayla South at 9:57 AM