This year things were a little crazy during Justin's birthday and frankly, he was overshadowed. It wasn't on purpose but our focus was getting Stoli healthy after the two emergency surgeries that she had endured in the last 10 days. Thankfully, she was able to come home on Justin's birthday which was the pick-me-up that we all needed.

When asked what he wanted to do for his birthday he immediately said, "I want to get the smoker out and BBQ."

Okay, then BBQ it is. He and his Pitt Smokers crew decided to turn the afternoon into a dry run for their BBQ season so we ended up with brisket, pulled pork, ribs and chicken. We invited his mom & Craig over & then Adam, Becky and Colton too since we knew we would never eat all the food that was being made.

& then it was time for basketball--the Final Four was on and boy would we be cheering for Villanova, I had some serious money headed my way if they won & we were already planning on how we would spend it. We're going to DISNEY--I've always wanted to say that.

Anyways, Justin's THIRTY-FIFTH birthday was pretty low-key, maybe it wasn't as exciting as his 30th birthday which was spent in Houston at the Final Four but it was everything he asked for... 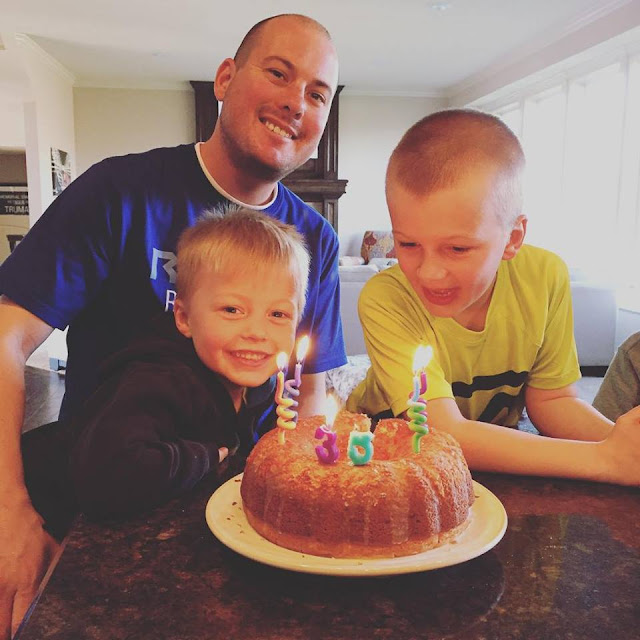 Oh and if you are wondering why there is a chunk of cake missing from Justin's cake his mom baked him---ask his brother. I guess Adam just wasn't cool with waiting after we had sung happy birthday to have a piece. Gotta love brothers.