We had high hopes for Kaden's first spring break but things just didn't work out they way we had expected them to so Plan B it was...

As soon as the St. Patrick's Day Warm-Up Parade had finished, we loaded back into the car and headed home to drop Justin off at the house. Both boys ran inside to quickly use the restroom and then loaded back up--we were off to Grandma Sara and Papa Tom's for a few days.

We arrived just in time for dinner---somehow I always manage to arrive right as food is being prepared or served. Uncle Zack, Aunt Lindsey and Miss Madison were already there and the boys wasted no time jumping in and playing with Madi because they knew their time was limited that evening. They'd get to see her again the following morning at C3 and again after too but they never seem to get enough time together. 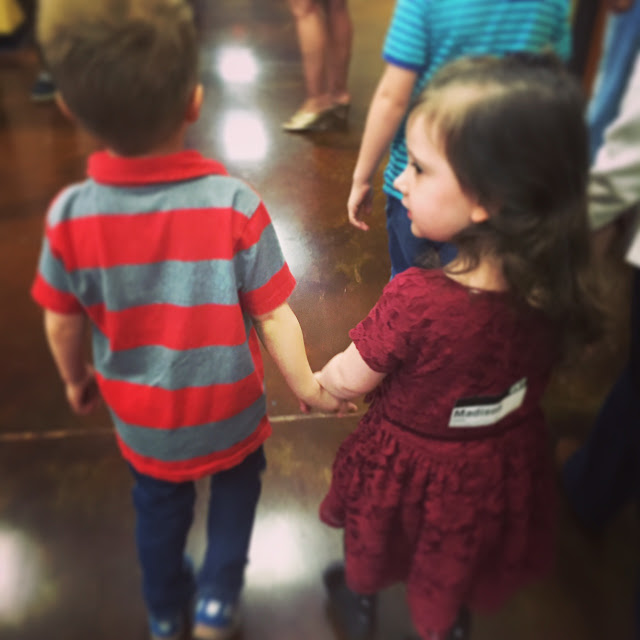 Sunday not only brought Sunday class but it also brought rain & lots of rain. To which I told the boys they could strip down and run out and play in it. Their smiles and giggles were easy reminders of what is really important in life and that sometimes you just need to slow down and enjoy all of God's glory. To dance in the rain. 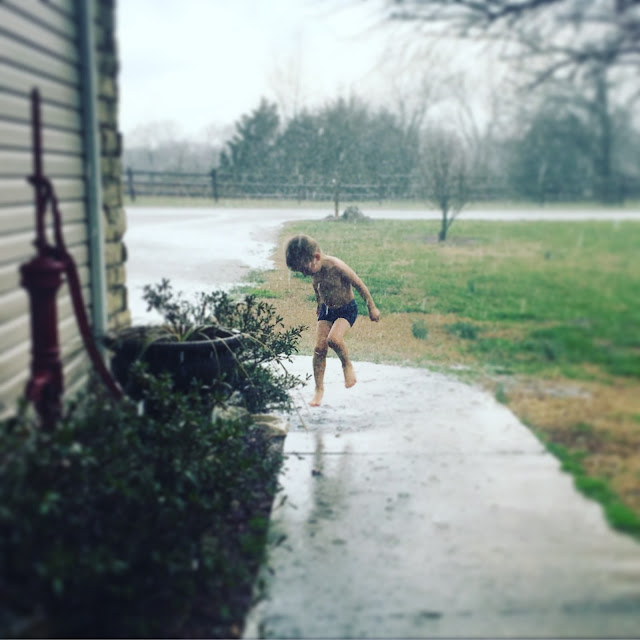 Monday brought a little bit better weather so we headed over to Papa Richard's house to help him out with some yard work. His flower beds needed raked and he had a few Holly bushes that needed to be trimmed back--Kaden jumped at the change to help when he saw the "giant scissors". 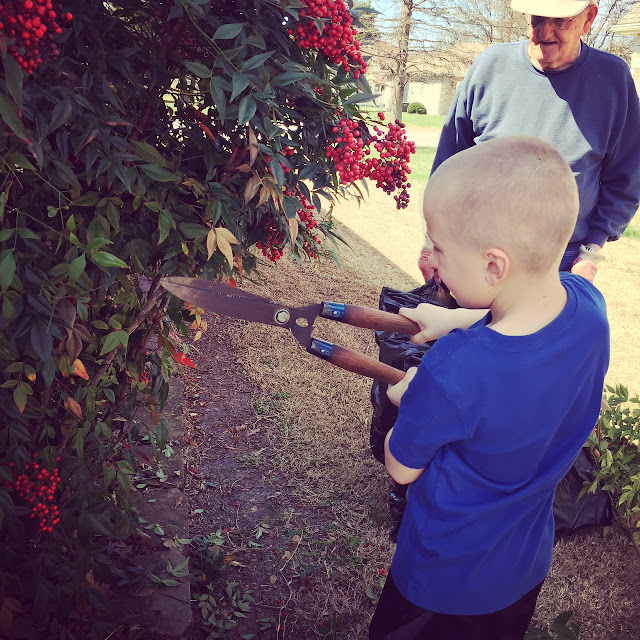 After we finished helping Papa Richard with his to do list, we sat down and enjoyed a nice iced tea on his back porch and watched as the boys played with some of my favorite childhood toys once again. 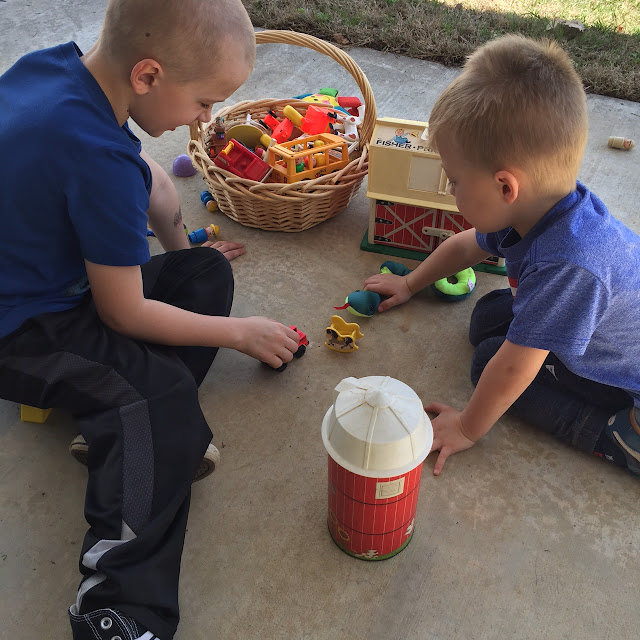 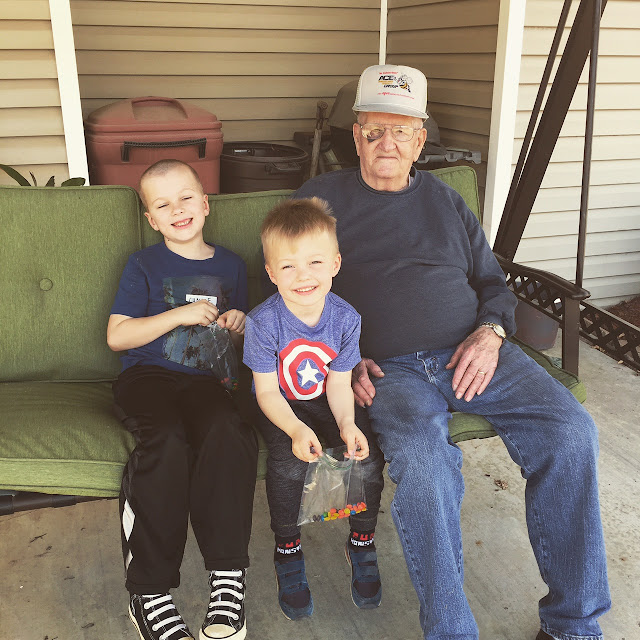 These three boys just make my heart swell---and please note, Papa Richard is fine, he had minor eye surgery, looks a lot worse than what it is.

It's always fun going to Papa Richard's as the boys get their bags of candy and I get to sit with one of my favorite people in the world and just talk. Being so close to him makes me feel close to my Grandma too.

After returning to Grandma Sara's and Papa Tom's the boys and Miss Madison went on a few egg hunts. We wouldn't be back in town before Easter and Grandma Sara knew they would enjoy hunting for eggs. Boy was she right. I think they went on about 10 or so hunts where Grandma and I took turns hiding the eggs and then once we were done, they hid the eggs for each other. 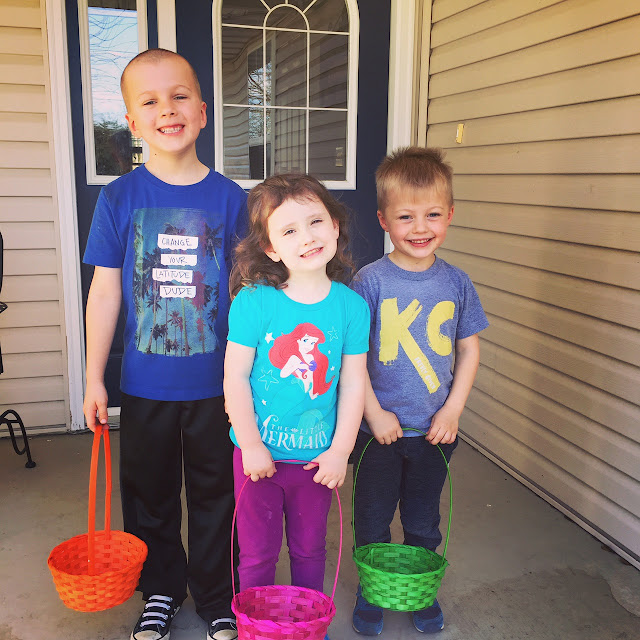 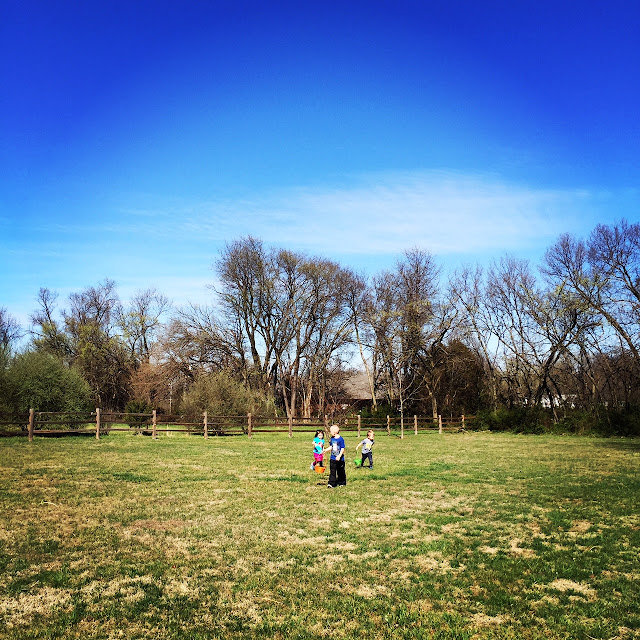 Going home always makes my heart happy.
Posted by Kayla South at 9:45 AM