Looks like the Easter Bunny and the Tooth Fairy will be making an appearance on the same day. I mean, check out that GAP--Kaden lost another tooth, with 4, 5, 6 and 7 right behind, well maybe not right behind but all loose and getting closer. 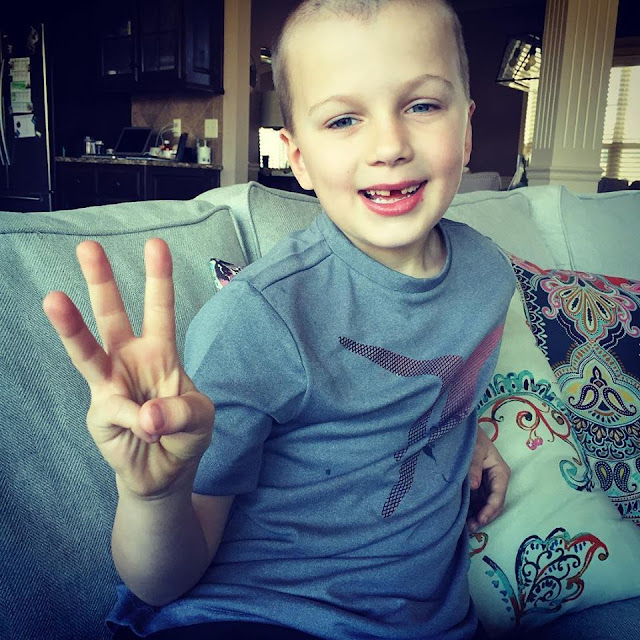 This tooth has been a little bit of a pain and seriously, I think it has been loose for like 5 weeks. It seems like forever since Kaden came running up to show me his tooth was "wiggly". I couldn't tell what he was talking about but eventually, I too, could see it.

For the last couple of weeks his smile has looked a little jacked up and even created this space between his teeth that wasn't there before---it looked a little weird but he was still a cute kid.

Each day I have been telling him he needs to wiggly it more and that he needed to use a little more strength, to which he tries.

Yesterday he was running around the house with the Garrett kids and just needed to take a little break so I had him lie down with his father in our bed as I folded laundry up there. He was wanting to make a deal with me so I told him my deal, "I'll fold this laundry and when I am done you can get up BUT you have to work on wiggling your tooth."

One minute later and he was already complaining that he was and I quote, "tired of wiggling his tooth." So I did what most parents would do, I suggested that he twist his tooth, after all, that is how I pulled all my teeth.

Justin's face was priceless during this exchange and he was just shaking his head. Next thing I know, Kaden has a look of shock, actually, it was more of a holy-shit-did-that-just-happen-look. I excitedly asked him if he just pulled his tooth and he was like, "Mom, I was just twisting it and it popped out!" followed by his nervous laugh that he has.

I think we were all three pretty amazed that he actually did it on his own. The first one was lost in the lake, the second one was kind of pulled out by Logan so we didn't have any sort of expectations that he would be willing to do it on his own. He proved us wrong. Himself too.
Posted by Kayla South at 2:13 PM